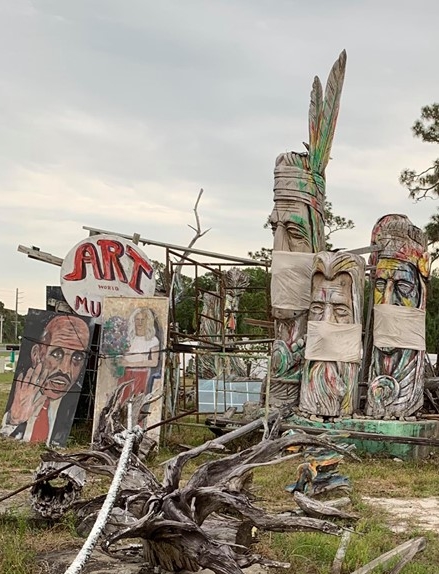 Since the 1970s, Hungarian-born and American-raised Peter Wolf Toth has busily created his giant hand-carved “Whispering Giants.”  Every U.S. state has at least one of the 72 giants that he has created.

I have featured Peter’s Whispering Giants in a few of my blog posts and even dedicated a chapter to these lovely giant carvings dedicated to the plight of the Native North Americans.

Since the beginning of March 2020, the world has been ravaged by the Coronavirus.  We have been pushed into “social distancing,” keeping away from people.  Over 95% of the American population is under some sort of stay-at-home order.  And, everywhere we go, we now see people wearing face masks to try to keep this terrible virus from spreading.

As a result, many people are adding masks to statues, etc.  And some of Peter’s Whispering Giants have been the recipient of these as well.   And now Peter is on a mission to get ALL of his Whispering Giants in the United States masked to recognize the plights of many of the Native American Tribes and their plight with the Coronavirus.  For example, as of this writing, over 1000 Navajo people have come down with the virus and 41 of them have died.  Other tribes are not exempt either.

I spoke with Peter on the phone today and he is so concerned about all of the American’s suffering, but especially the native Americans, many of which live in areas with scant medical facilities and some, like the Navajo Reservation, that has many areas without electricity and running water.   Out of respect for these great peoples, Peter would like to see all of his Whispering Giants get masked as a sign to protect these peoples.

So, I am posting this in hopes that those that read it and that may live or be close to one of these lovely sculptures might take a few moments to create a mask and then go to the Whispering Giant and carefully mask them so that they can be symbolically protected from the novel coronavirus.

If you do one of these, please email me at lessbeatenpaths@gmail.com with a photo and I will add it to this post with a credit to you for your time and photo.

Also, if you are not sure where the 70+ Whispering Giants are located, please check out the comprehensive site created by David Schumaker as it contains the locations of each of these.  CLICK HERE to get to his site. 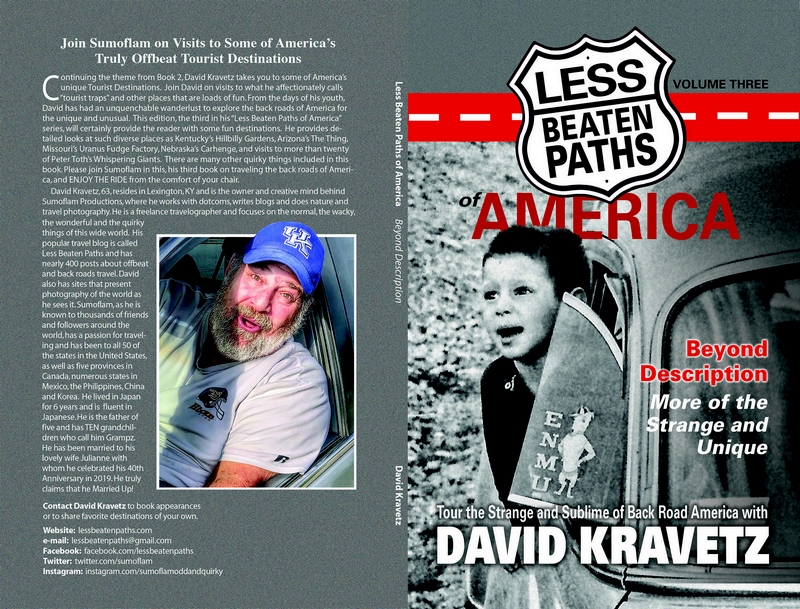 Imagine my excitement as I woke up this morning to see the PAPERBACK edition of my brand new Book 3, titled  Beyond Description – More of the Strange and Unique, had cleared review and is now available for purchase on Amazon! Like Book 2, it is 120 pages full of color photos and interesting stories. This one looks at unique and fun destinations like Carhenge (NE), Paradise Point Marketplace (KY), Bowlin’s The Thing (AZ), Uranus ,Fudge Factory and General Store (MO), Apple Valley Hillbilly Garden and Toyland Museum (KY), Wall Drug (SD), Lost River Trading Post (WV), Henrys Ra66it Ranch (IL) (and more) and then some themed towns like Vulcan, AB; Hell, MI; Mt. Horeb, WI; Santa Claus, IN, Winslow, AZ and Roswell, NM. Finally, there is a chapter on the Trail of the Whispering Giants and artist Peter Wolf Toth.

You can order the book beginning NOW and probably have it by Wednesday. I appreciate all of the past support and hope that you will continue to Enjoy the Read and Enjoy the Ride! Here’s where you can get it. (And please don’t forget to do a review!)

The paperback book is available on Amazon at

The Kindle Edition is available on Amazon on the link below: 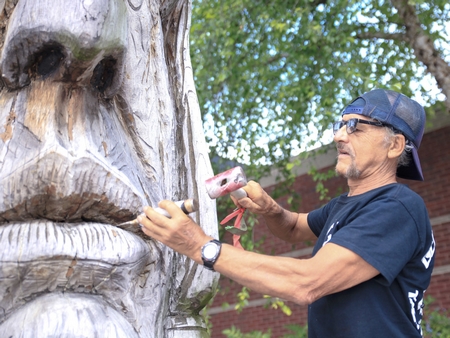 On August 20 I had a wonderful opportunity to spend a couple of hours on the phone with American artist Peter Wolf Toth who took time to speak with me from his Florida Studio.

I had contacted Peter to get more details about this interesting man with the intent on adding a chapter about him and his Trail of the Whispering Giants into my new book, which will be available in August 2019. (Actually, the Kindle version is now available…see the link at the end of this post)

If you are not familiar with the Trail of the Whispering Giants, it is a cross country collection of huge wooden sculptures created by Toth. Each is a tribute to the indigenous peoples of North America and each was done by Peter as a donation to the communities he created them in. His goal was to carve at least one in every state in the United States, which he finally accomplished in 1988 with his large sculpture in Hawaii.  Altogether, Peter has done 74 of these intricate statues.

When I spoke with Peter, he explained that he was born in Hungary, but came to the United States at a young age, landing in Akron with his family.  As he grew older, he grew interested in Native American culture and sought for ways to honor the indigenous people of this land.   He became a self-taught sculptor, using a hammer and chisel to work with stone. He told me that his first sculpture was in stone in La Jolla, California. He wanted to do another in stone near his home in Akron but, as he explained to me,

“It was in a remote location and really not visible to many.  I wanted to make these to honor the Native Americans, so I felt that making them from local trees in all of the states would honor them best.”

Unlike many artists that work with wood, Peter chooses to utilize a hammer and chisel to create these giants, which range in height from 12 feet to well over 40 feet.  He has no issue with those that so their work with chainsaws, but he likes doing his statues his way.

Peter takes great care and makes great efforts to create these donated works of art to honor the Native Americans, who he feels “were victims of long abuse” and also wants to make sure that all victims of abuse and hardship are honored.

In 1980 Peter published a book on Tribal Press titled Indian Giver: Gifts Of Statues For All 50 States To Honor The Indian and tells the story of the artist’s gifts to each of the 50 states to honor the Indian monuments now erected in the united States-the Trail of the Whispering Giants. The book is illustrated with both color and black and white photos of each sculpture.  Peter commented about this book.

“It was a custom among the many Indian tribes that when a man was presented with a gift, he in return gave back as a gift, an object of comparable value. This was an act of honor and respect. The white man distorted this philosophy and degraded it into a selfish act-a person who gives but expects to take back something in return. Hence, the term “Indian Giver” came into our language. If that is the case, then I too am an Indian Giver because I want something in return for these monumental gifts I am sculpturing. In return, I ask that honor and understanding be shown toward the Native Americans because of the tragic fate that has befallen these noble people.”

This book is available on Amazon for those interested in seeing the artist’s perspective on his work.

I am grateful to have become acquainted with Peter Wolf Toth.  I have admired his works, even though I have only been to 13 of them so far.  I will make it to more and hope to get down to his Florida studio sometime in the near future to see his work and enjoy the view of the Atlantic Ocean with him while we talk of the wonders of the world.

Like what you see? Well, there is lots more!  I now have three books available about offbeat and quirky places to take on your road trips. You can see all of them at http://amzn.to/2ks6fQZ. Book 3 was published and available on August 24, 2019.