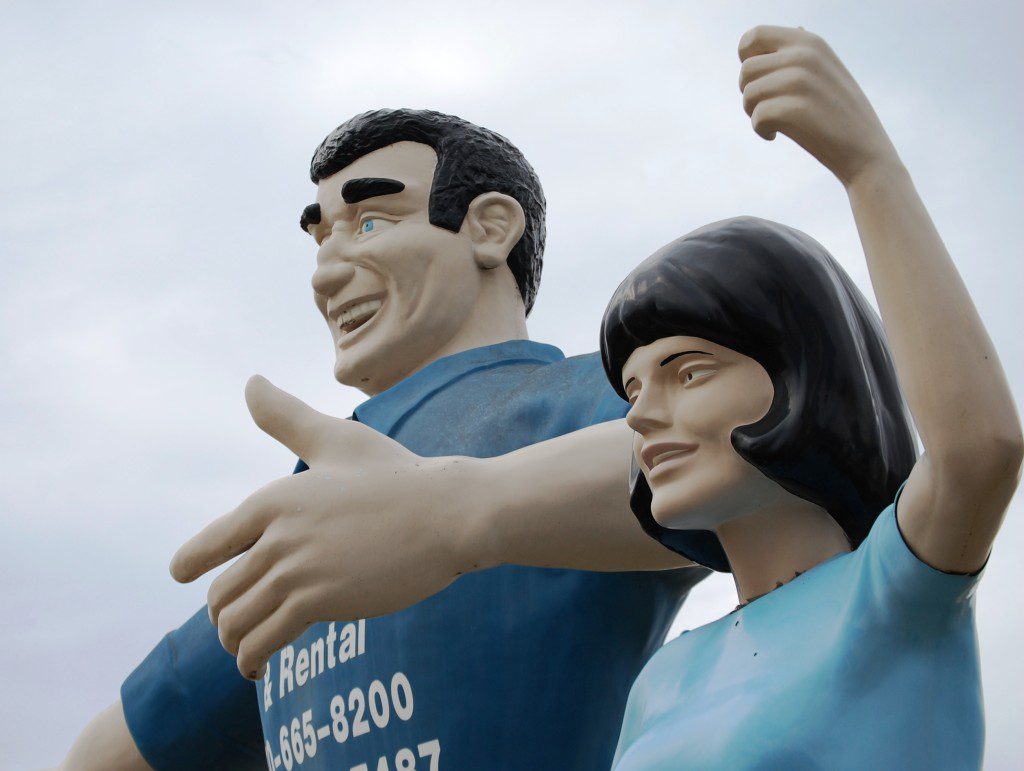 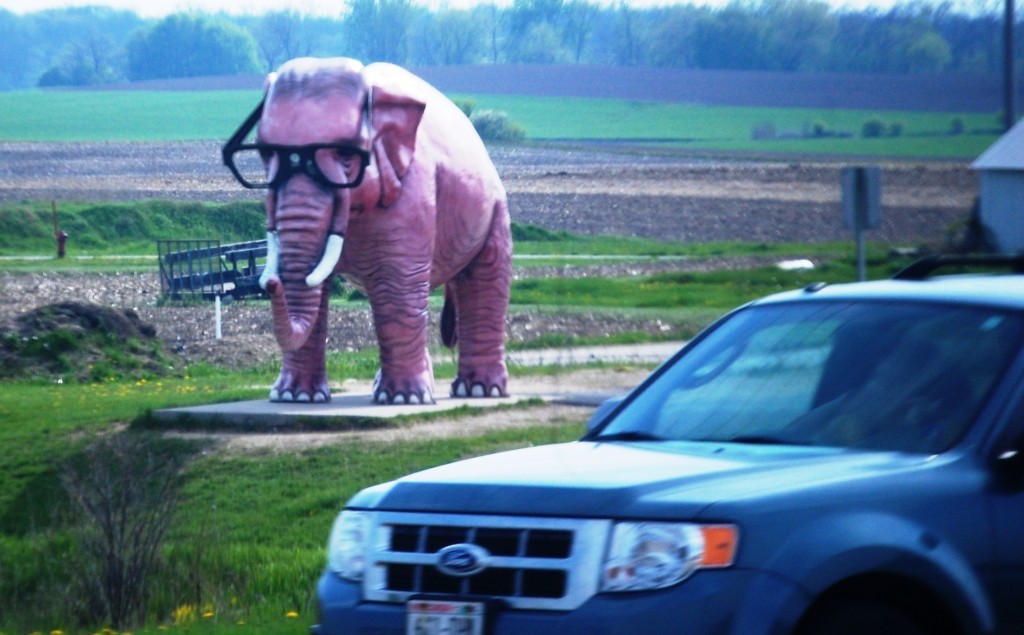 Let’s face it, Americans love those quirky roadside attractions!  We all know it and its time to admit it. As far back as the 1930s they have been around.  But it was the 1960s and 1970s that really got the roadside things going as people traveled Route 66 and other US Highways.  The quirky and offbeat were the drawing cards…the highways were our Disneylands! 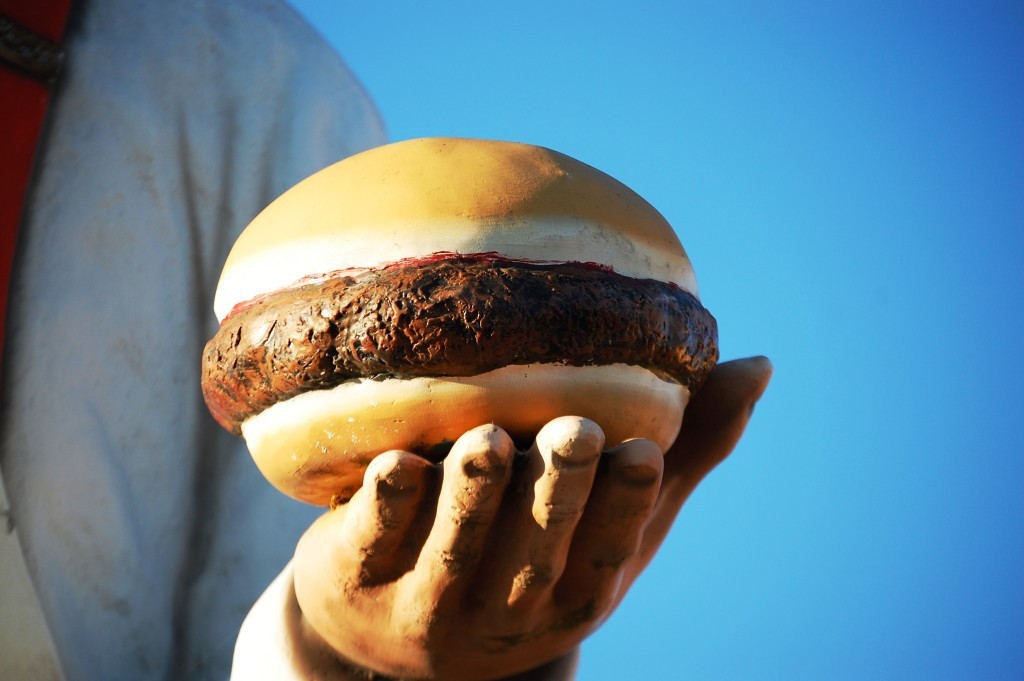 Remnants of those days still hang around even as some artsy companies keep pushing them out to roadside restaurants, garages and filling stations.

One of the most iconic of the roadside tchotchkes were the Muffler Men, those roadside giants holding Mufflers and axes and other things. I remember them well from my youthful 1960s living in Albuquerque.  There are now websites that are totally devoted to them (such as the American Giants website with great, professionally produced documentary-style videos made by Joel Baker and his team) and then my favorite site on the web Roadside America, which has a huge section about them including a detailed and fascinating (and well-researched!) history of these guys.

Like many travelers, a few years ago I figured there were only one kind of muffler man.  But, as I have traveled across this country, I have run into a few of them and their derivatives as well as some that were mistaken as muffler men.  Once again, the genius team at Roadside America has even gone to the trouble to create a glossary to identify the myriad variety.

So, as I drive the back roads of America, I am always on the look out for these friends of the freeways and heroes of the highways.  I am nowhere close to have come across the dozens and dozens of them, but I have certainly stumbled on a few and even have enjoyed the variety of them as shown in this post.

The one above has a mustache and a cowboy hat. It is the parking lot attendant for a big casino in Great Falls.

So, what is the history.  I suggest you read the entire story HERE.  But, in a nutshell, it was Steve Dashell’s company, “International Fiberglass, that turned out thousands of commercial statues in the 1960s and 70s. International Fiberglass took a single statue mold created for a cafe and parlayed it into a roadside industry.”  It turns out that International Fiberglass also created the green Sinclair Dino’s (many are still around) and some ESSO Tigers (remember those?).  His first fiberglass giant was built in 1962 for a restaurant in Flagstaff, AZ.  It was a Paul Bunyan looking Lumberjack.  I am a graduate of Northern Arizona University in Flagstaff and, if I am not mistaken, that same Paul Bunyan now sits on the NAU Campus as does one other. (see the story here)  Unfortunately, during my time at NAU I never took any photos of them….humph!!

Dashell’s company made some basic molds and then were able to use them to create a variety of styles.  Some were made for Texaco, some for Uniroyal (a Female statue).

There are a few collectors out there and so they sometimes appear in out of the way places.  Perhaps the most well known collector is Glen Goode in Gainesville, TX. (see RA Article Here).  I visited Glen’s place in 2012.  He has the BIG THREE including a Uniroyal Gal, a Muffler Man and a couple of Big Johns.

The Big Johns were made by a company in or around Cape Girardeau, MO in the late 1960s and 1970s.  I have come across one of the originals in Metropolis, IL, with grocery sacks and all.  It stands nearly 30 feet tall.  Unfortunately, he is outshined by the 12 foot tall BRONZE Superman in Metropolis (added here for fun)

I also saw one as I drive into Mississippi from Tennessee, without the bags:

I also came across a “deconstructed Big John” at a place in St. Louis.  The legs were on display in the front and the upper torso sat in the backyard…with the original checkered shirt.

Of course, I have run into a few more in my travels.  There is a beer toting one in Sturgis, SD standing guard outside of the Full Throttle Saloon (yes, the one from the TV Show in 2013)

There is another one I came across in Hatch, New Mexico

While in Hatch I also came across another iconic fiberglass family…also created by International Fiberglass in 1963 when A&W introduced four choices of hamburgers and their corresponding Burger Family members: Papa Burger, Mama Burger, Baby Burger, and Teen Burger.  There aren’t many of these around.  I looked for the one in Hillsboro, Oregon in 2012 and couldn’t find it.  I was thrilled to see this one in Hatch, NM.

But the Muffler Men, Big John and Uniroyal Gal are not the only big fiberglass folk out there.  Ironwood, MI is home to the “World’s Tallest Indian Statue”, a 50 foot Hiawatha that was built in Minneapolis in 1964, transported to Ironwood.  It is huge and can be seen towering above town at the end of main street.

Another big fiberglass creation is the Jolly Green Giant in Blue Earth, MN.  Added by Creative Displays (which later became F.A.S.T) in 1978.  At 55.5 feet tall, he is a tad larger than Hiawatha.

Not nearly as large, but yet another roadside icon that continues on throughout the U.S. is the Big Boy statue.  Actually, there are a couple of them.

As a young boy in Albuquerque, the Bob’s Big Boy was always a treat. We saw him in many places.  These Big Boy statues were another creation of International Fiberglass.  Many of them are gone now (there is even a site dedicated to Big Boy Graveyards).  Nowadays in Kentucky there is Frisch’s Big Boy, which is headquartered in Cincinnati (the original Bob’s started near Detroit in Warren, MI).  They have a different looking brother to the original.

Speaking of fiberglass burger guys, Seymour , WI proudly claims to be the home of the original hamburger and has erected a 12 foot fiberglass statue of “Hamburger Charlie” Nagreen, the supposed inventor. (there are claims by other towns)

The town of Santa Claus, IN has a number of fiberglass statues of Santa, but the biggest and oldest (built in 1935) was made of cement.

There are a number of others around town.  Here are a couple of the Santas that hang around Santa Claus, Indiana

Finally, a few other guys I have run into on the road….