Bob Dylan, Eric Clapton and Stevie Ray Vaughn have all sang about it. And now, Sumoflam has driven it. US Highway 61 cuts down the middle of Mississippi, all the way from Memphis to Natchez and more.

Highway 61 is better known as “The Blues Highway” as many of the famed Blues musicians grew up along this swath of the state just east of the Mississippi River.

In July 2014 I had the opportunity to travel this famed highway from North to South, visit many of the small towns and learn more about Blues History. It was an amazing drive through rural Mississippi!

The highway, Route 61, actually extends 1407 miles north to south all the way from Wyoming, Minnesota to New Orleans. The highway generally follows the course of the Mississippi River, and is designated the Great River Road for much of its route. This route goes through St. Louis, Hannibal, MO, Davenport, IA, Memphis, Vicksburg and eventually to New Orleans. It’s “Blues Highway” designation really begins at the Mississippi/Tennessee in border in Memphis.

As you leave Memphis and cross into Mississippi on US 61, you are greeted immediately be a big Muffler Man statue and then the Blues Highway sign (as seen above) is in the same location.  The Blues Highway has become so popular that it even has its own website and they have developed a Blues Trail app (or for Android) for travelers too.

The Blues Trail features dozens of historical markers along the way and their site features a comprehensive list with maps to each.  Due to my typically tight schedule, I was only able to hit a few of these.  Some that I missed include: B.B. King’s Birthplace, the historical “Birthplace of the Blues,” the Elvis Presley marker in Tupelo, the John Lee Hooker marker, the Johnny Winter marker (which I unfortunately overlooked when I visited Leland to see the birthplace of Kermit the Frog — see below), the birthplace of Muddy Waters and more. But, I did hit a few along the way.

My first stop, however, was at the “Gateway to the Blues” Visitors Center just north of Tunica on old US 61.  The Visitors Center is built in a rustic train depot, circa 1895.  It is filled with guitars, maps, souvenirs, etc.

Tunica is a big resort town along the Mississippi River, dotted with casinos, hotels and other resorts.  But, there is still some good old history.  On Magnolia Street near downtown Tunica is the “Tate Log House” which the locals claim has the distinction of being the “oldest and most traveled structure” in Tunica County.

The cabin was built in the 1840s near Robinsonville, Miss., and later purchased by Samuel Kerr in the 1860s. When Robert F. and Simpson Tate purchased the land in 1890, the cabin was converted to a plantation commissary.  In 1952, the Tate family sold the land to the another family and the cabin was moved south to Elsie, Miss., and then later to a place  near Austin, Miss., in the early 1990s.  Finally, in 2000, the house was donated to the Tunica Museum and moved again to its current location in Tunica. 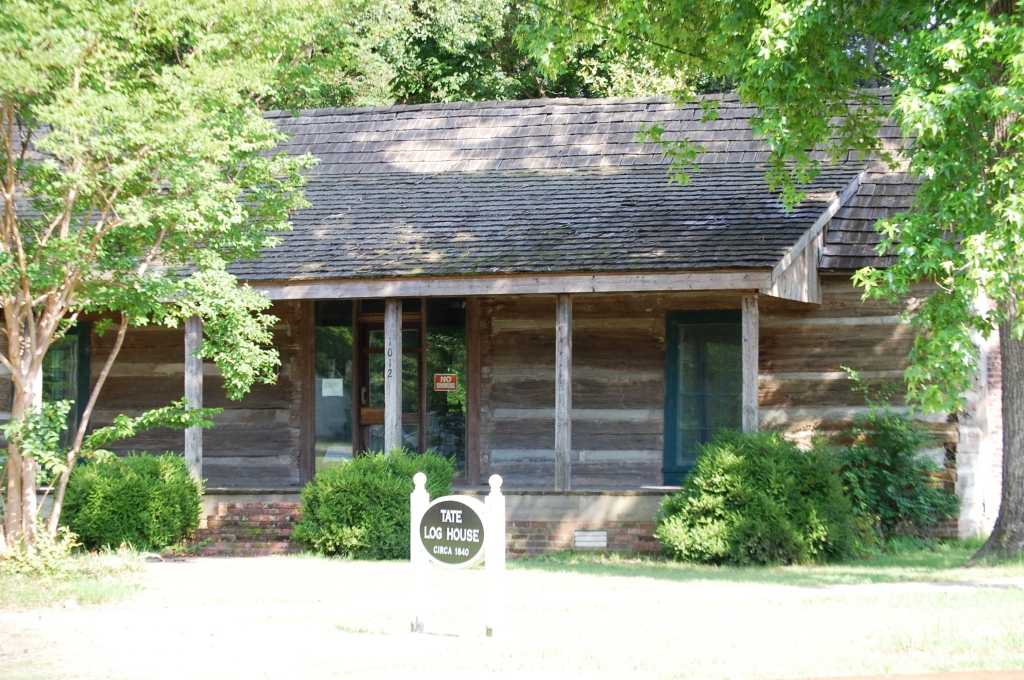 I could have stopped at some of the real small towns along the way, but it was getting later in the afternoon and I wanted to get to Vicksburg before dark, so I kept pushing on…into Clarksdale, Mississippi, which probably has one of the most renown Blues Highway markers and monuments.

Known as “The Crossroads”, where US 49 and US 61 meet, it is believed to be the legendary crossroads where famed blues guitarist Robert Johnson made his pact with the devil.  Robert Johnson was born in 1911 and only lived until 1938. He was a dirt-poor, African-American who would grow up, learn to sing and play the blues, and went on to become known the world over.  Since his death, his music has been picked up by some of the most well know rock stars of the 60s, 70s and on, including the Rolling Stones, Bob Dylan, Eric Clapton, the Allman Brothers – have recorded his songs.  In fact, Clapton has called Johnson “the most important blues singer that ever lived.” Someone has made a video with his famed “Cross Roads Blues.”

And of course, Eric Clapton has made this song immortal with a number of versions of this song.  In this video he pays homage to Johnson.

Some say that new evidence suggests this is NOT the Crossroads where the famous pact was made.  I guess I should have made a visit down to Rosedale, but I didn’t have my rider by my side….

And of course, what is a visit to Mississippi without Bar-B-Q (which I didn’t get to try either).  Abe’s was right there at the Crossroads.

Not far from the Greyhound Station is the “New Roxy” Theatre in the Historic New World District on Issaquena Road in Clarksdale. This old movie theater has been converted into a live event venue, with some very unique characteristics. What remains of the old theater is basically is a shell of the former theater with a sloping concrete floor, a masonry stage, lots of distressed brick walls, and a view of the night sky (as there is no longer a roof remaining. This rustic setting is home to many local blues shows and festivals.

Not too far from the New Roxy is a Blues Road marker for Sam Cooke (famous for songs such as “You Send Me, ” “Chain Gang,” and “A Change is Gonna Come,” which was sung by Bettye Lavette and Jon Bon Jovi at the inauguration celebration President Barack Obama.

Practically next to Sam Cooke’s marker is one for W.C. Handy, who lived on Issaquena Road.  Known by many as “Father of the Blues,” Handy remains among the most influential of American songwriters. Though he was one of many musicians who played the distinctively American form of music known as the blues, he is credited with giving it its contemporary form. While Handy was not the first to publish music in the blues form, he took the blues from a regional music style with a limited audience to one of the dominant national forces in American music.  I recall playing his compositions in Jazz Band in high school…tunes such as “St. Louis Blues,”, “Beale St. Blues,” and more.

Another icon of Clarksdale is the historic Paramount Theater.  Originally known as the Marion Theatre, the facility opened in 1918 on Yazoo Avenue in Clarksdale. The theatre one of the first in the area to be built mainly for showing movies. During the 1930’s, the Marion Theatre was acquired by the Saenger Amusements chain, which went on to rename it to the current Paramount Theatre. The theater was in operation until 1986, but is apparently being renovated by the Mississippi Arts Council.

Of course, in a town borne of the blues, what better design for benches around town?

Continuing south on US 61 about 12 miles, I came to one of my “sought after destinations” in the town of Alligator, Mississippi (population abt. 200).  My original intent was to visit just because of the name, but this town is, in my mind, all about the blues and how I imagined it.

I didn’t see any real alligators in Alligator, but I did see lots of history.  The town is home to the “Alligator Blues,” as the Blue Highway Marker below indicates.  Alligator has a blues history that rivals that of many a larger town. Once a bustling business center, Alligator has had entertainment spots in town in addition to outlying country juke joints, plantation house parties and storefronts where musicians played as they traversed the surrounding communities.  Robert Johnson apparently lived in the area in 1930.

Alligator also had some wonderful wall murals including the one at the top of this post and the one below.

Solidly entrenched in the heart of Delta Blues country, I continue my journey, next to Shelby, MS. This town of about 2000 is home to a couple of Juke Joints including the Do Drop Inn (not to be confused with the famed Dew Drop Inn of New Orleans).

Juke joint is a term used by locals for the informal establishments that featured music, dancing, gambling, and drinking.  These were mainly operated by African American people in the southeastern United States. The term “juke” is believed to derive from the Gullah word joog, meaning rowdy or disorderly.  A juke joint may also be called a “barrelhouse”. Juke Joints catered to the rural work force that began to emerge after the emancipation. Primarily African-American establishments, juke joints were opened in the southeastern United States during the era of the Jim Crow Laws. Since black sharecroppers and plantation workers were barred from white establishments, juke joints provided a space for these people to kick back after a long week of work.  Places like the Do Drop Inn are slowly disappearing as a result of large casinos in many of the areas along the Mississippi.

Next stop on US 61 was Mound Bayou.  This town was an all black town in the Yazoo Delta in Northwest Mississippi. It was founded during the spring of 1887 by twelve former slaves led by Isaiah Montgomery.  This fledgling black colony continued to remain predominantly African America, and, by percentage, its 98.6 percent African-American majority population is one of the largest of any community in the United States.

Cleveland, MS is one of 11 towns named Cleveland in the United States. I was born in Cleveland, OH so visiting any Cleveland has meaning.  (I have also been to Cleveland, TN and Cleveland, IN).

Cleveland is one of the great places to experience the heritage and culture that is the blues, Just outside of town is Dockery Plantation . Often called the “Birthplace of the Blues.”  This was home to Delta blues musician, Charley Patton, and was recently honored with a marker on the Mississippi Blues Trail. He is considered by many to be the “Father of the Delta Blues”, and is credited with creating an enduring body of American music and personally inspiring just about every Delta blues man.  Indeed, it is said that Patton inspired Blues greats John Lee Hooker, Howlin’ Wolf and even Robert Johnson at Dockery Farms.

Cleveland is also noted as the place where W.C. Handy was inspired after hearing a blues band in 1905.

Downtown Cleveland has a beautiful tree-lined walkway in downtown, near the old railroad station.

As evening closed in on me after the long drive from Lexington, KY, I scooted southward into Leland, MS.  I had hoped to see more of the historic town, but light was running out and I definitely wanted to get to Leland to see the “Birthplace of Kermit the Frog.” Though closed, there was enough light to get a couple of photos.

Famed puppeteer and mastermind of “The Muppets” Jim Henson grew up around Leland, MS, played along Deer Creek and became word famous.  This is where he got his start.

So, the day finally ended and darkened as I left Leland and headed for my overnight stay in Vicksburg. End of Day 1 on the Blues Highway – nearly 670 miles of driving from home to here. My next post will complete the trip from Vicksburg to Natchez and into Louisiana.

2 thoughts on “Highway 61 Visited: The Blues Highway of Mississippi – Day 1”