The last couple of weeks I have focused on town name signs. On my last post I left off at Earth, Texas.  But there are a few more planets out there…real and fictional.

Perhaps Mars, Pennsylvania is the most famous of our planet named towns in the US. No one is sure how the name “Mars” came into being. Some say it was Samuel Park’s wife,  who enjoyed astronomy, and others aver that it might be shortened from Samuel Marshall’s name.  In any case, on March 6, 1895, Mars was incorporated as a borough.  Residents of Mars are often called “Martians”, or “Planets” because of the high school team name, The Fighting Planets.

There are a number of other places in the U.S. named after planets.  SenseList.com has a nice list of the many town names and place names.  Of all of those on that list, perhaps the most well known would include Jupiter, FL, and Blue Earth, MN, which is home to the Jolly Green Giant statue. But, there are other “planets” as well.  How about Romulus in Detroit (I have yet to get a photo of the town sign near the airport!!).  Then, try out Vulcan, Alberta.

I really get a kick out of this town.  They have a Starship Enterprise statue, murals on the walls with Star Trek stars, etc.

If not a planet, about a Star?  Brightstar, Louisiana

Then there are the town names that may conjure up an inappropriate thought:

There was actually not a Climax sign for the town, nor is there one for Climax, Kentucky.  But, if you are on Interstate 73 in North Carolina, you will see an Exit sign for Climax and High Point.

Here are few more quick ones:

Want more strange town names for your upcoming trips?  Here are a few sites for you:

24 of the Funniest Town Names in America (Reader’s Digest)

Towns with the Most Unusual Names (Travel Channel) 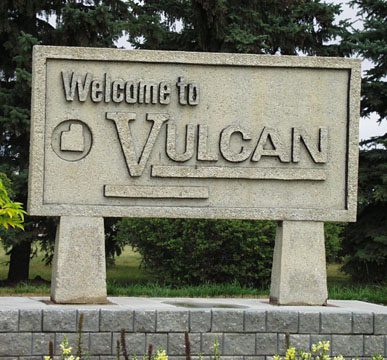 A couple of days ago I posted an article about Earth, Texas.  Back in 2007 I had occasion to visit a friend of mine in Alberta, Canada.  One of the side trips we tool was to the town of Vulcan, which has taken full advantage of its name and the association with the TV show Star Trek.

There are indications all over the town of Star Trek.  The town took on the Star Trek theme after the great popularity of the TV Show and now has Star Trek visitations all the time, as can be evidenced from their website (linked above).

There is an Enterprise Restaurant, the visitor’s center is space themed (and you can even buy pointed Spock Vulcan Ears there!!).  They even have a statue of the Starship Enterprise!

As one drives around the town, there are signs for parks, etc., with the Enterprise logo…

All told, Vulcan is a unique and interesting place to visit….