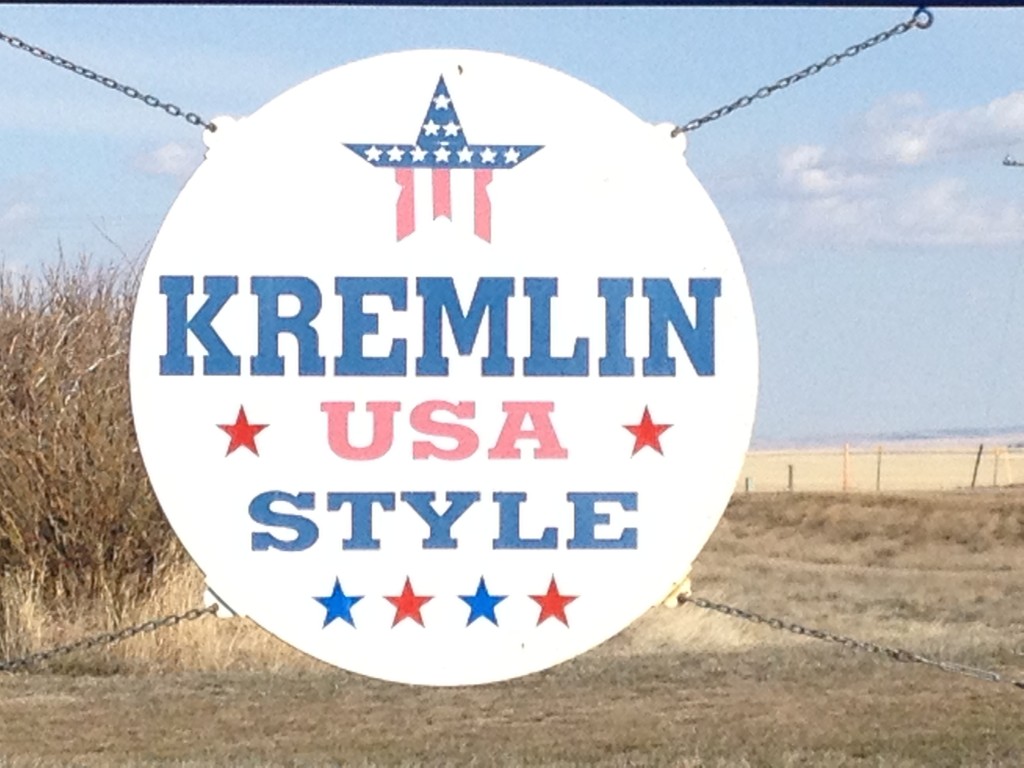 March 31, 2013: After spending a few wonderful days in Shelby, Montana with family (see my previous post on Shelby), it was time to head back to Kentucky.  This segment of the trip we would take US Route 2 along what is called the Montana Hi-Line.  Basically, the highway parallels the Burlington Northern and Santa Fe Railroad (BNSF). The full Hi-Line in Montana stretches from North Dakota to Idaho border, for a distance of more than 650 miles.  However, it seems that to many of the residents in the area, the Hi-Line is really the stretch of US Route 2 from about Cut Bank, MT all the way east to the North Dakota border. US Route 2 is the northernmost east-west route in the United States and is broken into two segments – the western segment is the longest stretching from Everett, WA all the way to St. Ignace, MI for a distance of 2112 miles.  We drove the route all the way to Wolf Point, MT and then headed south to Glendive, for a total of about 420 miles for the day.

The Hi-Line drive is predominantly wind swept rolling prairies, wheat fields and small towns dotted with tall grain elevators, silos and old abandoned buildings.  The hey day of the early railroads is long gone and many of the towns now cling to life with farming and support of the BNSF tracks that run though the dozen or so small towns.

Between Shelby and Chester there is not much.  We passed by the Frontier Bar in Dunkirk and then, past there we saw a few old wooden cabins, barns and elevators.

As a throwback to the 60s, we did come across an old RV Park in Galata, MT.  I loved the old vintage sign.

Train tracks and silos span the entire way along Route 2.  Scenes like the one below are not at all uncommon.

Continuing east from Galata, our next stop was in Chester, MT, a town of about 850 people. You can tell by the welcome signs that it is most definitely a railroad town.

Apparently, the Sugar Shack Diner was a prefab “Valentine Diner” built by Valentine Manufacturing of Wichita, Kansas in the 1950s. It is a 10-stool diner built in 1953, with previous homes in Conrad and Chinook, before being moved here.  There is an interesting site on these prefabs done by the Kansas Historical Society.  Following is the advertising graphic for this type of diner from the 1950s:

Of course, I continue to collect Wall Art/Murals from my trips.  Here are a couple I saw in Chester.

From Chester we headed east.  To the north we could see the Sweet Grass Hills far beyond the prairies.  These are legendary to the local Blackfeet.

These are prominent in the area in that the three main buttes and the surrounding hills jut up out of the prairies, with a couple of them having a towering vertical rise of over 3000′ above the land level. The main hills are West Butte (6983′), Gold Butte (6512′) and East Butte (6958′). The three buttes and the hills between them run for about 50 miles east to west and are about 10 miles in distance from north to south.

Our next stop was in Joplin, Montana, a small town of barely 150.

There wasn’t much in Joplin but a few buildings, so we pressed forward to Rudyard, Montana, which promised to have a bit more personality.  Before we got to Rudyard, off to the right of the highway we came across a big metal triceratops skeleton.  It was so random!

Apparently, this dinosaur is the work of a metal artist in Rudyard as I found another site that had some photos of some other pieces.  I’ll check it out next time in Shelby to see the family.

Like many of the towns on the Hi-Line, Rudyard is a small town.  They claim to have 596 Nice People and 1 Old Sore Head as can be seen by the sign above. Even though the town is small, they also have a small museum, which apparently has some dinosaur-related things.

The charm of small towns are the museums and historical centers.  Unfortunately, we were driving through on a Sunday afternoon and things were not open.  But, Rudyard boasts a couple of museums – see the Rudyard Historical Society site for more details.  Following are a few photos from Rudyard.

See the link for the Vintage Auto Museum

Actually, there is apparently a story about “Old Sorehead” being a dinosaur.  Check it out here. So, even though it is a small town, there is certainly a story here.

The other thing I learned about Rudyard is that it is the only populated spot in the United States that has an antipode that reaches a landmass. The antipode is the opposite point of any point on the surface of the Earth, so that if you connected the two points with a line through the center of the Earth, that line would be an exact diameter. Mathematically, the antipode of a point whose latitude and longitude are (A,B) equals (-A, B ± 180°).  Almost everywhere in the U.S. hits a point in the Indian Ocean, except for two unpopulated sections of Colorado and then a section of Northern Montana (see this map).  The town of Rudyard has an antipode in one of the small islands of the Kerguelen Islands (also known as the Desolation Islands) in the southern Indian Ocean.  There is also a great little animation about antipodes here.

Enough about geography…back on the road eastward with the next stop being Kremlin, Montana.

The town of Kremlin apparently got its name from a Russian immigrant who was laying railroad track in the area around 1890. He saw the Bears Paws mountains in the distance and they reminded him of home.  There is a nice story here.

Continuing east on US Hwy 2 towards Havre we took a sideroad to visit a small abandoned schoolhouse in what used to be Fresno, Montana.  This schoolhouse has been photographed numerous times and is kind of indicative what things looked like on the prairies.  From US Hwy 2 we took a left on Smith-Frisno Road, crossed over the tracks and went north about a mile.  The old schoolhouse is on the left…you can’t miss it.  It’s actually about 8.5 miles from downtown Kremlin.

Havre is probably the midway point on the Hi-Line and is by far the biggest town on the Hi-Line as well with more than 10,000 residents.  The town was in incorporated in 1893 and was founded primarily to serve as a major a major service center for the Grand Northern Railroad which was built by James J. Hill, who was also known as “The Empire Builder.” The town was named for Le Havre in France due to the number of Frenchmen working with Hill.

The main industry for many years has been the railroad.  BNSF was, for many years, the main employer in town, though the hospital and a university may now be the biggest employers. It is also about 6 miles north of Fort Assiniboine which served as one of Montana’s chief military posts from 1879 through the early 1900s.

Former Havre resident Lyndon Pomeroy is a well known Montana metal sculptor.  He created the Hands Across the Border piece to represent U.S. and Canadian partnership in northern Montana.  He has a few other works in Havre and also a number of them in Billings., where he now resides.  He also has done a recent large piece for Malmstrom Air Force Base in Great Falls.

The above bison was created by Havre resident Cory Holmes, who used three miles of old telegraph wire to create this nine-foot long, six-foot tall 2000 pound bison.  Cory is better known for his “Fence Post Art,” some of which can be seen here. He has work in 19 states and two Canadian provinces.  The fence sculptures cover a wide range of subjects: people, animals, insects, abstract and impressionist pieces. Can’t wait for my next trip to Montana to look for these!!

From Havre it was east to Chinook.  This town of a little over 1200 people. Like many of the towns in northern Montana, Chinook was born from the railroad.  In the late 1880s the railroad was coming through here and by the early 1900s the town had hotels, businesses and a bustling economy. In 1924 the Utah-Idaho Sugarbeet company moved to Chinook to make molasses and sugar beet pulp.  There are still many nostalgic signs hanging in town.

From Chinook the drive gets more scenic as it also runs along the Milk River.  Unfortunately, the day was passing by as we passed small towns like Zurich, Harlem and Malta on our way into Glasgow.  I wanted to get to Glasgow before dark so I could get shots of the dinosaur statues on a hill as you enter town.  Another quirky way to end the daylight portion of the trip before pushing our to Wolf Point and then into Glendive.

As you approach Glasgow from the west on US Hwy 2 you will see a large hill to the left, covered with metal art by local metal sculptor Buck Samuelson, who has some of his work cataloged by the Smithsonian Institute. See some closeups here.

It was really a long day, especially since we left Shelby at 2 PM to head east.  We made it into Glendive around 11 PM, but had a great eventful day along the Hi-Line.  The next day will be a fun one too with the Enchanted Highway and Mount Rushmore on the agenda!!  Watch for that post soon.