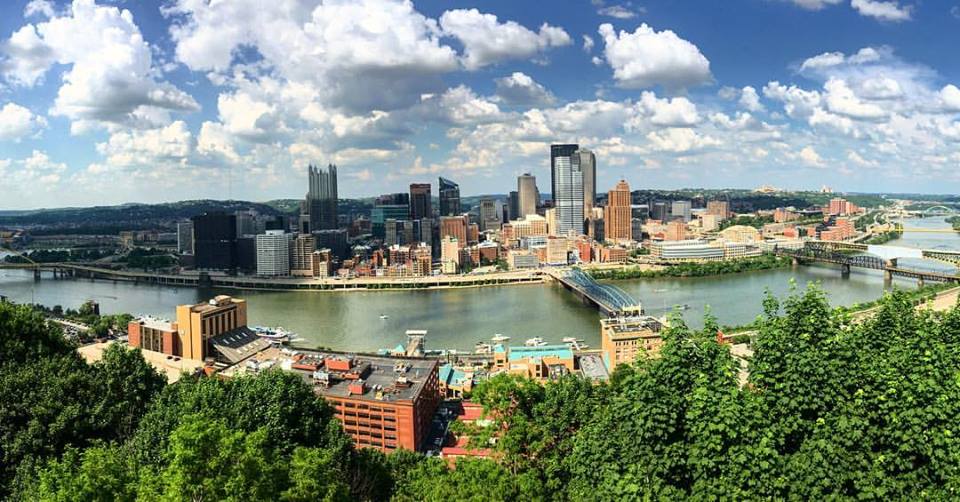 As noted in my previous post about Prosperity/Canonsburg/Washington areas of Pennsylvania (see post HERE), we took an afternoon with my wife’s sister and her family to take a drive around Pittsburgh.  Obviously, an afternoon does no justice to a large beautiful city like this, but that was all the time we had. Fortunately, I have been to Pittsburgh before and have knocked out a few places worth visiting (see my post which includes some Pittsburgh sites HERE).

Our drive took us past the amazing glass structure built by PPG — their headquarters.  Some call it the “Glass Castle” and indeed, it looks like one.

Actually named PPG Place,  this amazing building is one of six structures designed by architects Philip Johnson and  John Burgee and completed in 1984.  The six buildings cover three city blocks and five and a half acres. All of the buildings are of matching glass design consisting of 19,750 pieces of glass. The complex centers on One PPG Place, a 40-story office building.

We also crossed over the famed Roberto Clemente Bridge, named for the 60’s era Pittsburgh Pirates outfielder. We passed by the Andy Warhol Museum (but didn’t stop to visit).

A study in 2006 noted that there were 446 bridges in Pittsburgh thus giving the town the nickname “The City of Bridges.” Of course, not all of them are the massive structures crossing the three major rivers.  There are nine or ten prominent bridges, including the Clemente, which is one of the “Three Siblings,” which are three parallel, nearly identical self-anchored suspension bridges that cross the Allegheny River at 6th, 7th, and 9th streets. They were named for prominent Pittsburgh residents: Roberto Clemente Bridge, Andy Warhol Bridge, and Rachel Carson Bridge.

After driving around a bit, we headed to the Monongahela Incline to take a ride up Mt. Washington, a hill that provides amazing panoramic views of Pittsburgh. This proved to be the highlight of this trip.

The Monongahela Incline is the oldest continuously operating funicular railway in the U.S. It opened on May 28, 1870, and has since then transported millions of passengers.  Built at a cost of $50,000, the incline opened up Mount Washington to development, enabling people to live 600 feet above the city and still have easy access to factories and businesses along the river.

At one time Pittsburgh had 15 inclines. Today the Monongahela and its younger sister the Duquesne (about a mile away) are the only ones that remain.  The cars are not self-powered, and do not even have operators on board. Instead, they are pulled up and down the inclined track by a cable driven by an engine in the upper station, where the operator works. The cars operate in pairs, permanently attached to opposite ends of a single cable, with one going uphill and the other going downhill simultaneously. The cars therefore counterbalance each other, so the engine needs to provide only enough power to overcome friction and the difference in the weight of the passengers in the two cars.

The ride up the hill is about 635 feet and climbs a little over 365 feet in altitude at a grade of about 35 degrees. At its max speed of 6 miles per hour, the ride takes about three or four minutes. There is no air conditioning in the buildings or on the actual trains.  So, on a hot day like we experienced, it was a warm wait.

Each car holds about 23 people, with room for about 8 persons in each section of the car.  It is certainly something I would want to sit down on rather than stand in.  The view from the window can be kind of scary.

Once atop Mt. Washington, the view is breathtaking with expansive views of the three rivers (the Allegheny, Monongahela and Ohio) and the many bridges over these rivers.

While at the top, we took in the view, walked over to DiFiore’s for an ice cream treat and a rest.  From there I caught sight of an amazing wall mural.  Titled “Bloom,” this giant mural was painted by Gerard Tonti in October 2007. This is one of a number of large Art Murals funded by the Sprout Public Art project of Pittsburgh.  According to the website Pittsburgh Murals and Public Art, there were 32 original Sprout murals, but there are many more throughout the 90 Pittsburgh neighborhoods.  Looks like my next trip may be a mural hunt!!! (Pittsburgh Murals has created a great spreadsheet for the mural/public art seeker HERE.)

Also while driving along the top of Mt. Washington we came across a lovely statue sitting on the edge of the hill (at Greenbriar Avenue and Sweetbriar Street).  Titled “Point of View,” this 2006 bronze sculpture by James A. West depicts George Washington and the Seneca leader Guyasuta, with their weapons down, in a face-to-face meeting in October 1770, when the two men met while Washington was in the area examining land for future settlement along the Ohio River.

That pretty much ended the day trip to Pittsburgh for us.  It was fun, but certainly warrants another visit in the near future.