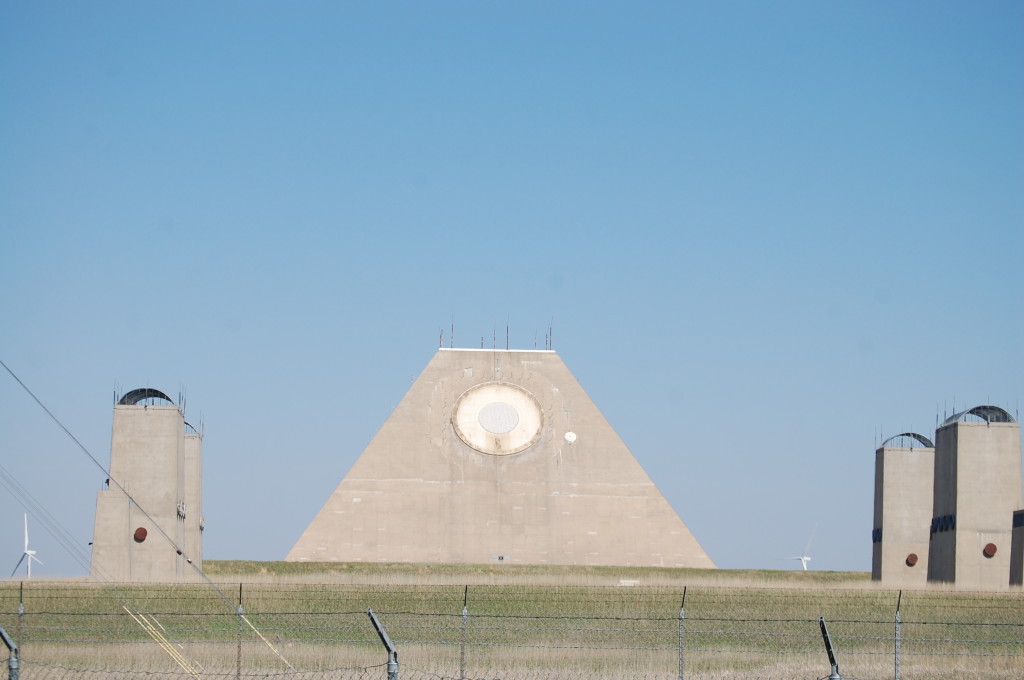 I continue my series on my Montana road trip and my drive along US Route two across the northern border from Michigan to Montana.

As one progresses further west after leaving Minnesota, you soon discover that the land is flatter, full of prairies and grasslands and not as many lakes and streams as one would see in Minnesota.

After driving around Grand Forks for just a little bit, I proceeded forward on my drive and, for the first time since starting on US Highway 2, I deviated from the route to head north to an unusual destination. If you need advice on speed limits in this area, you may get it from here.

Before heading north I passed through Niagara, ND and a stop at the historic monument for the Old Fort Totten Trail which was used by the Sioux to assist in delivering mail.  From here I proceeded to Petersburg, ND, another old small town.  I came across their old Curling Club building.  Who said that Curling was only a Canadian sport?

A few more miles down Highway 2 I went through the town of Michigan, ND (population 425)…returned to Michigan after a couple of days (hehehe).

Michigan, ND has a Barn Quilt Trail, which is common in Kentucky, Indiana and Tennessee, but I have not really seen these in other states in my travels.

Finally, before heading north off of US Highway 2, I passed through the town of Lakota, ND.  This town is about 60 miles west of Grand Forks.  From here I would head north on ND Hwy 1.

One of my “goal destinations” in North Dakota was to see the unique pyramid near Nekoma.  Actually, the pyramid is part of a larger installation called the Stanley R. Mickelson Safeguard Complex (SRMSC).  This complex was the United States’ first operational ABM (anti-ballistic missile) defense system.

The Mickelsen Safeguard complex was deployed during the 1970s to defend the offensive Minuteman missiles based at Grand Forks Air Force Base in the event of a nuclear ICBM attack by the Soviet Union or China. Depending on the threat, the system could also provide a limited defense of a wider geographical area, including other offensive Minuteman missile fields as well as civilian population centers. It was operational for approximately eight months.

This unique facility is fascinating to look at.  The pyramid was actually called the Missile Site Radar (MSR) installation.  It used the target trajectory and classification data from the Perimeter Acquisition Radar (PAR) along with additional data supplied by its multiface phased array radar. This site provided additional surveillance and target tracking and also performed the function of track and guidance for the Sprint and Spartan missiles.  Following is a video that explains some of what happened in the 1970s.

The pyramid shaped MSR is by far the most unique building on the site. The 80 foot high truncated pyramid “turret” of the MSR gave the radar its ability to see in all directions and is the only visible part of the MSCB. The MSCB underground areas held additional radar equipment and the data processing and command/control systems. The adjacent underground power plant provided the generating capacity to operate the MSR’s battle management systems.

The pyramid was not the only thing of interest in the area.  Nekoma, ND was the support town for the facility, though most of the staff came from the nearby Grand Forks Air Force Base.

Nekoma is also the home of the Langdon Wind Farm which has 106 Wind Turbines, some of them right up on the Mickelsen Safeguard complex. In the middle of prairie lands, it offers unique views.

I continued north on Hwy 1 into Langdon, ND to see if there was anything interesting there.  Langdon is about 15 miles south of the Canadian border and has about 1800 people residing in the town.

As I drove around I found the town park which actually had one of the Spartan missiles used at the complex in Nekoma.  I thought that was unique.

From Langdon I proceeded to head west on ND Hwy 5 and then south on ND Hwy 20 to pass though Munich, ND.

From Munich I continued south into Cando, ND to get some Can Do Spirit!!

Cando, ND is one of my token unique named towns.  It got its name as follows:

“…and in virtue of our authority we select this location and name the town ‘Cando’ to show you that we can do it.”

Cando is also the “Duck Capital of North Dakota.”

And there were a couple of interesting things in town….

From Cando I headed west on ND Hwy 16 and then south on ND Hwy 3 into Rugby, ND which lays claim to being the geographical center of North America.

According to the 1931 U.S. Geological Survey, the geographic center of the North American continent is located approximately 6 miles west of Balta, Pierce County, North Dakota. The approximate coordinates are given as latitude 48* 10′ North, 100* 10′ West. The field stone pillar was erected in 1932 on US Hwy 2 and ND Hwy 3.

A few more scenes from Rugby…

I had finally returned to US Hwy 2 and proceeded westward toward my next planned stop which would be Minot, ND. This city is home to the North Dakota State Fair, but, of more interest to me is their celebration of Scandinavian heritage. The annual Norsk Hostfest is the largest festival of its kind in North America and is a tribute the area’s Scandinavian heritage. The Scandinavian Heritage Park is home to a replica of the beautiful Gol Stave Church which currently sits at the Norsk Folkemuseum in Oslo, Norway.

The Gol Stave Church Museum, in Scandinavian Heritage Park is a full-size replica of the original church built in about 1250, now in Bygdoy Park in Oslo.  It is all wooden inside and I would call it “immaculately simple” in its architecture.

The wood carving is intricate and beautiful in this church. This work was apparently done by professional wood carvers Philip Odden and Elsa Bigton of Norsk Wood Works in Barronet, WI.

A stone’s throw from the Stave Church is the 30 foot Dala Horse which is apparently the most recognized Swedish symbol in the world. In central Sweden, wood scraps from the local furniture-making trade, paint-pigment from nearby copper mines, and long winter evenings bred the development of the Dala Horse. Traditions vary in giving credit to woodsmen and to soldiers for originating the craft. Dala Horses from the Nusnäs-Mora area first appeared with their familiar bright decoration in the 1800’s when the kurbit, or flower patterned saddle, was regularly added to them. There is actually a website dedicated to the Dala Horse.

From Minot I continued on to Williston, ND.  This is the heart of the North Dakota oil industry and “fracking.”  There are about 200 drilling rigs in the area. (Read an interesting article about this from National Geographic).

Along the way I got a photo of this old homesteader’s house in the prairies.  In the background you can see an oil well pump.

Williston is a modern Boomtown as “roughnecks” make their way to the town for oil jobs. North Dakota has the second highest level of GDP per capita, generating about $69,000 in economic activity per resident. Only Alaska ranks higher as a result of this oil boom of the 21st century.

As I drove into town and through town, I was amazed at the number of “extended stay” hotels, prefab apartments, huge trailer complexes and more that had gone up to house all of the oil workers.

The other thing I noticed was the terrible traffic and all of the road construction and infrastructure building in a town whose population is now bursting at the seams. The photo above represents the nearly 45 minutes that it took me to drive through the town in almost constant stop/go traffic on the congested roads.

For Fracture Drilling, the oil rig (or derrick) is used to drill both vertical and horizontal portions of the well.  These are actually temporary in nature, and, depending on the well depth and number of wells developed, these will remain on site for a week to as long as eight weeks. There is a great definition of how the complete process works on Halliburton’s website. I saw a number of Halliburton facilities in Williston.  I know this is a controversial process, and I am not condoning or complaining about it here.  I believe that many of us have no idea how it is done.

From Williston I headed west into Montana for an overnight stay in Glasgow, Montana.

I finally arrived in Glasgow, Montana late after driving all the way from Grand Forks, ND, about 490 miles. They only had one motel left in town with any availability due to a state softball tournament.  For the first time in ages I stayed in a 60s style motel with neon and a real key for the door on one of those plastic diamonds with the room number.