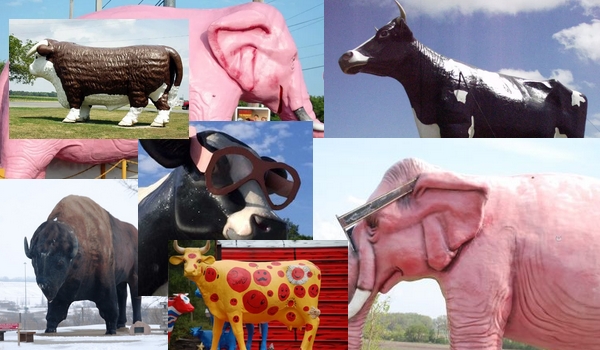 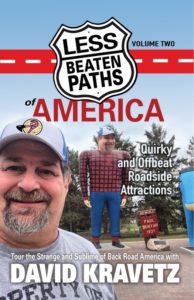 Hey friends – I spent most of Labor Day weekend trying to finish up my SECOND BOOK! All about Quirky and Offbeat Roadside Attractions, this book will be about 150 pages and have over 80 full color photos. It looks like the book will retail for about $25. It will be paperback with glossy paper.  I hope you can let me know via a comment or instant message on Facebook/Twitter/LinkedIn if you are interested.

I had to cut the book down from 320 pages due to the prohibitive cost (yes, I have a start on Book 3 already!!!).  I have inserted the cover (above) and four sample images (below) so you can see what the book will be like. (Thanks to Antsy McClain for the artwork on the cover.) As my Self-publisher CreateSpace is migrating over to Kindle Direct Publishing, I will not even be able to make the book available for Pre-Order until the beginning of October.

THANKS IN ADVANCE for your input. 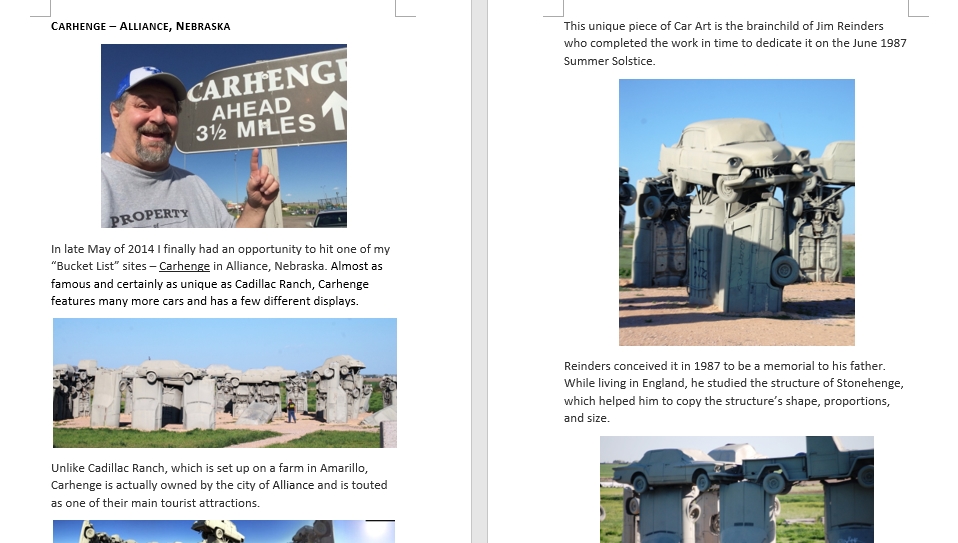 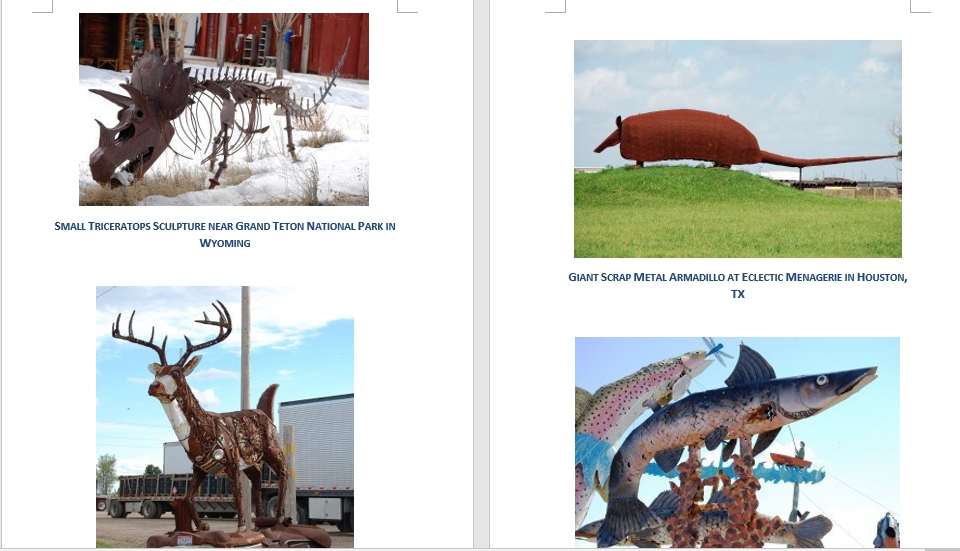 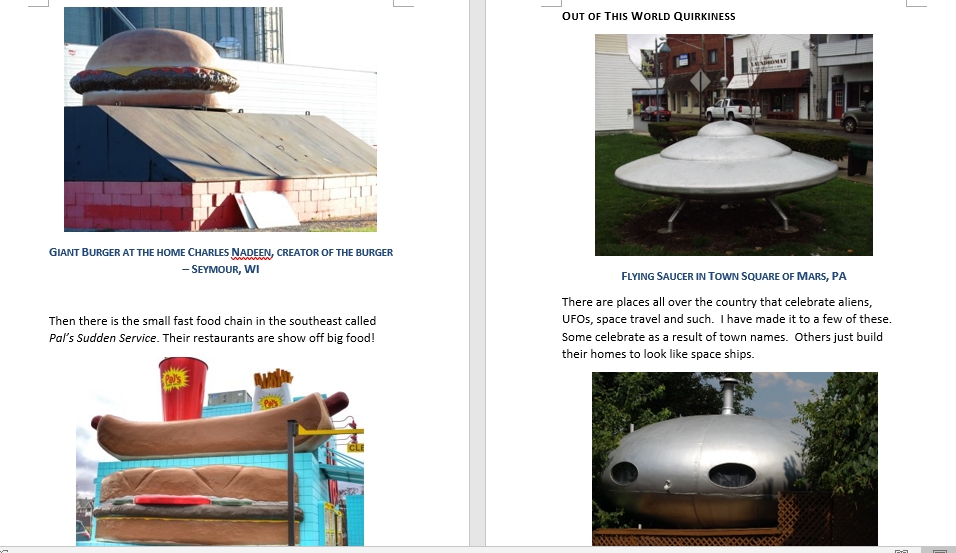 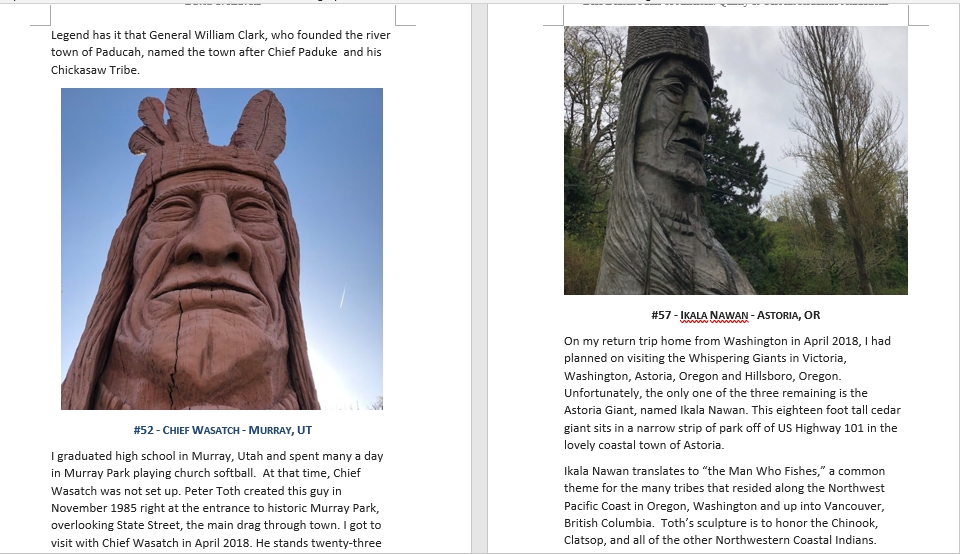 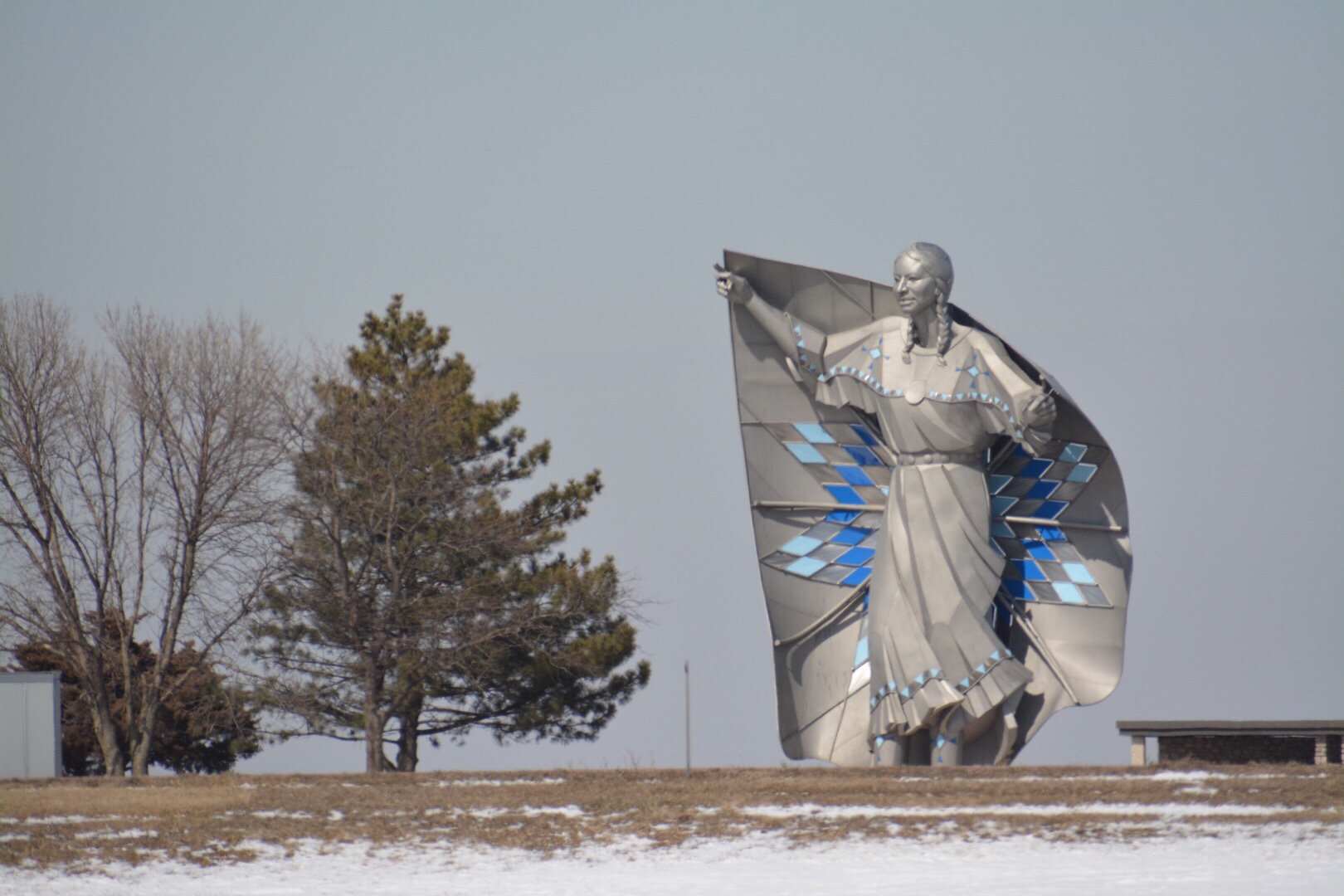 I love having the opportunity to come upon new and unplanned discoveries in my roadtrips.  While traveling, I constantly check my Roadside America app (which is available for iPhone download here) which has a handy dandy location finder and will tell you the closest of their featured attractions.  While driving through South Dakota near Chamberlain, I did so and came across “Dignity: A 50 foot-tall Indian Woman” statue entry.  Turns out it is located at a rest area near Chamberlain, SD overlooking the Missouri River valley way below.  It was also a Lewis and Clark stopover.

Dignity (a.k.a. Dignity of Earth & Sky) is a 50-foot high stainless steel statue by South Dakota artist Dale Lamphere that depicts an indigenous woman in Plains-style dress receiving a star quilt. The massive sculpture honors the culture of the Lakota and Dakota peoples who are indigenous to South Dakota.   Lamphere notes on his website:

“Dignity represents the courage, perseverance and wisdom of the Lakota and Dakota cultures in South Dakota. My intent is to have the sculpture stand as an enduring symbol of our shared belief that all here are sacred, and in a sacred place. My hope is that the sculpture might serve as a symbol of respect and promise for the future.”

I am always interested in things about the various Native American tribes.  Having worked as a tour guide in Arizona, I became somewhat expert on the Navajo and Hopi as well as the old Anasazi cultures.  My travels across the United States and Canada have allowed me to pass through many Native American reservations and lands.  In these travels I have come across many large statues dedicated to these great indigenous peoples (such as the Hiawatha statue in Ironwood, MI – which stands 52 feet tall and the Standing Brave statue in Big Cabin, OK – which is also nearly 50 feet tall).  And of course, in an earlier post on my April road trip, I mentioned the “Whispering Giants” series by Peter Toth, of which I have seen more than a dozen. And there are the Blackfeet Warrior metal sculptures that are at all four entries to the Blackfeet Reservation in Montana. The 44 foot tall Keeper of the Plains in Wichita, Kansas is another good one.  I believe the tallest Native American statue is the 62 foot tall Indian of Skowhegan in Skowhegan, Maine, which I have not visited.

Back to Dignity – Representing the rich Native American culture of South Dakota, the 50-foot Native American woman wears a dress that is patterned after a two-hide Lakota or Dakota dress of the 1850s. She also holds a quilt that has 128 stainless steel blue diamond shapes designed to flutter in the wind. Apparently, the quilt was also bedecked with LED lights that cause the diamond shapes to glow in the night sky which can be seen from Interstate 90 (which I would have loved to have seen).  The quilt is very impressive as you can see in the photo on the left as well as the expanded one below.

Dignity is not only 50 feet tall, but her base is 16 feet deep (to help withstand the strong South Dakota winds on this bluff) and is 32 feet wide.  The statue weighs in at nearly 11 tons and cost over $1 million dollars to make. The money was kindly donated by a couple from nearby Rapid City, South Dakota. The statue was officially dedicated in September 2016. It is truly a sight to see and I was so glad to have been on this highway.

The view from Dignity is impressive as it overlooks the Missouri River valley down below.  This was also a Lewis and Clark observation point.

Finally, I would like to note that South Dakota is proud of its tourism and especially its numerous sculptures which would include the famed Mt. Rushmore, the giant Crazy Horse statue still under construction and the giant brontosauraus at Wall Drug. They have a website especially focused on the sculptures of South Dakota called the South Dakota Sculpture Trail.

In closing, I want to note that in my upcoming book (hopefully to be released at the end of June), I will have a complete chapter on Native American statues and art. 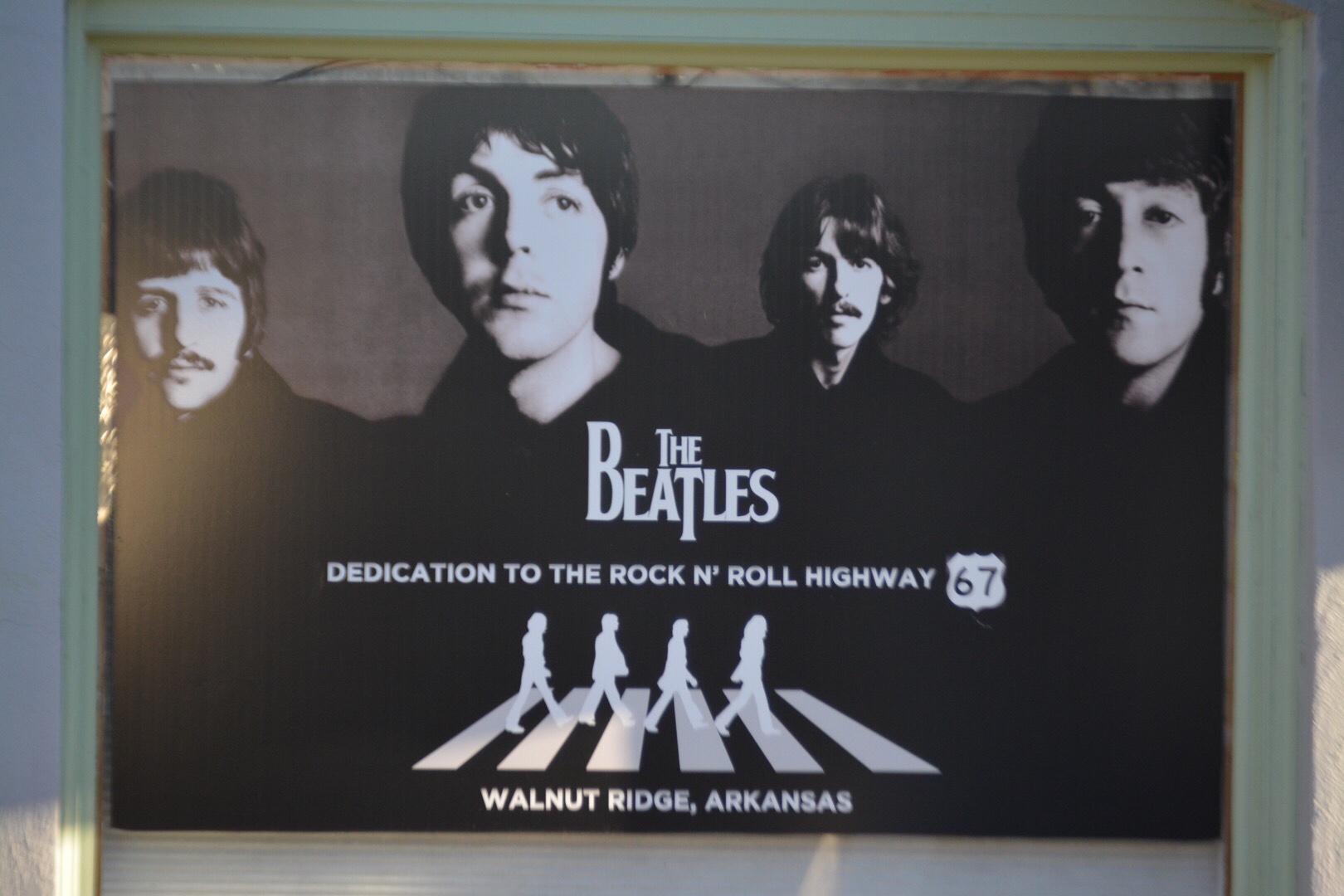 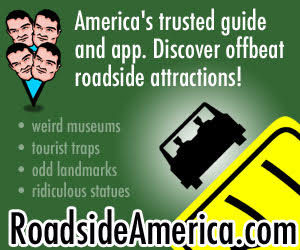