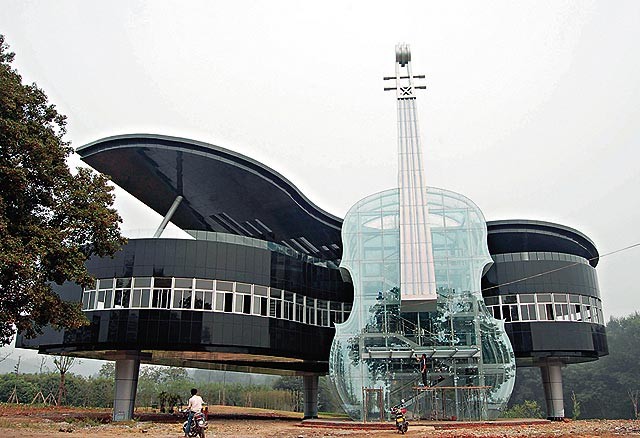 I don’t typically post content from other sites, but I couldn’t resist on this one.  Came across this Northern Ireland real estate site that had a page on some really quirky looking houses from around the world.  The full page can be seen here:

Here are three photos from the site…visit the site to see all of the other quirky houses, including an upside down house, a house shaped like a toilet, another like a guitar and more….. 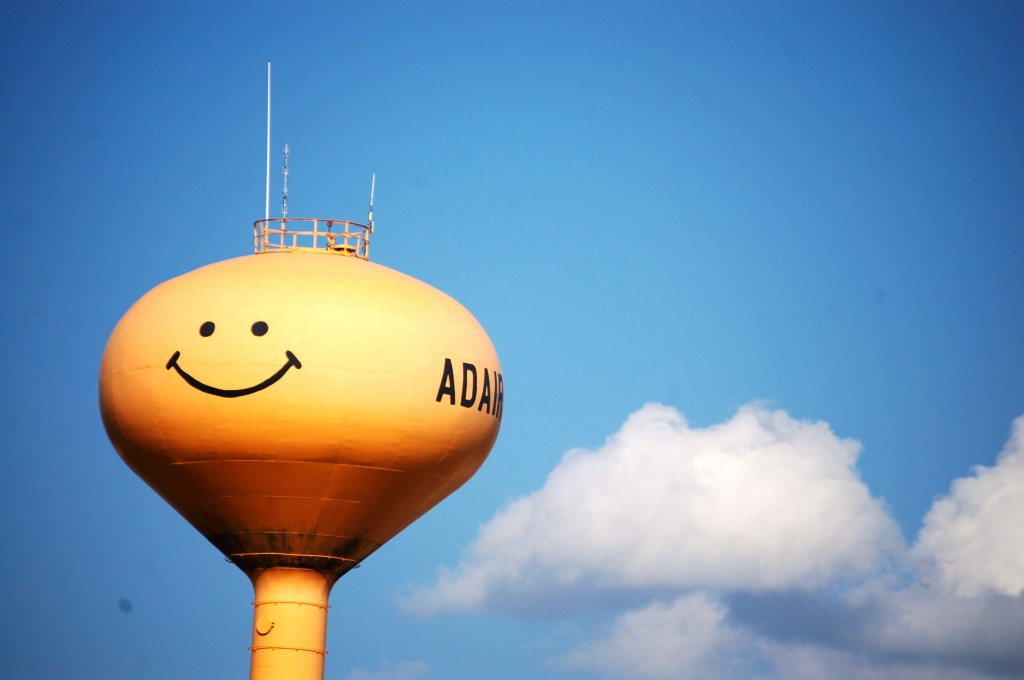 Day 2 of my trip with Marissa would take us through Iowa and into Nebraska.  I promised to be a fun day of driving the backroads of the Midwest (kind of….)

With the Grandkidz with us, every morning was an early one, so we were on the road in Walcott fairly early.  First thing I saw as I stepped out of the hotel was this big semi carrying a blade for a wind turbine.  This would set the stage for some subsequent visits along the road this day. You never really know how big these are until you have a frame of reference, like a huge truck.

From the truckstop we meandered into the small town of Walcott to get a glimpse of something really unusual.  A house built to look like a medieval castle…  Castle Hall. According to stories, this was built in 1905 to look like Balmoral Castle in Scotland, but it is nothing like it in my eyes.

This goes to show that you never know what you might see in small town America!!

Of course, then there is my penchant for scrap metal art.  This scrap metal flower piece was just across the street from the Castle Hall.  Had to snap a shot to add to my “collection.”

From Walcott it was Westward Ho towards Iowa City, with a quick stop in Coralville.  I got to visit with Thomas Jefferson there while waiting for Marissa and the kiddos at the Coral Ridge Mall.

While I was waiting I also caught a couple of bugs on flowers….

From Coralville, we headed south on US 218 towards the small town of Riverside, IA. Why Riverside?  Well, the small quaint town is “officially” the Future Birthplace of James T. Kirk, Captain of the Starship Enterprise — Star Trek. Apparently, Gene Roddenberry approved the Riverside Town Council’s recommendation to make it so….in 1985. The future historical birth, which is set to take place on March 22, 2228, is also celebrated annually by the people of Riverside.

The town even has its own Starship…the Starship “Riverside”

There is also a small History Center and Souvenir shop in town as well as a bench dedicated to someone and it was donated by none other than William Shatner, the original Captain Kirk from the old Star Trek TV series in the 1960s.

The town holds an annual TrekFest in June that draws thousands of Trekkies.

This was not my first venture into Trekkiedom….  back in 2007 I visited the town of Vulcan in Alberta, Canada (see my blog post) with my good friend “Crafty Jack” Burger (see my longer post about that visit), a guitar maker from Lethbridge.  I got a good shot with the scale model of the Enterprise there.

Well, enough about boldly going where no man has gone before.  We ventured further south for a quick stop in the small town of Swedesburg, IA….a little taste of Sweden.

The straw goat, also known as a “Julbock”, is one of the biggest symbols of the Swedish Christmas tradition and also serves in this town as a lure to come visit the town and its famous museum.

Since the Swedish museum was closed, it was further south towards our planned for destination.  But, we had to go through Mt. Pleasant and so I stopped to get a shot of their local Statue of Liberty.

From Mt. Pleasant we proceeded west on US 34 until we hit Iowa Hwy 16, which we took south to the town of Eldon. Why Eldon?

Well, this actually is a very famous place in the history of American Art as it is the location of artist Grant Wood’s 1930″American Gothic” painting — you know, the one with the two folks, the guy with the pitchfork in front of the house.  Not only is the painting famous, but it is probably one of the most parodied pieces of art anywhere (in my opinion). Only a few other images, such as the Mona Lisa or Scream, by Edward Munch, are as widely known as American Gothic, and because of its high visibility, the painting is an easy choice as a parody.

The visit starts at the American Gothic House Center, just a few yards from the actual house in the painting. This is not only a museum dedicated to the painting, but it also houses a number of parodies, provides visitors with prop clothing to wear and do their own photo in front of the house, etc.

The original portion of the house that contains the two Gothic windows was built in 1881-82 by Catherine and Charles Dibble. As the original owners of the home, it is listed on the National Register of Historic Places as the Dibble House.  Grant Wood used his sister Nan and his dentist Dr. B.H. McKeeby as the models (see more here).  Ironically, the models for the artwork never posed together when they were drawn prior to, or during the painting of American Gothic.  This was conceptualized by the Grant Wood.

Shawnee, Kansas photographer Jason Tracy (see his site) has kindly given me permission to use his high res photo of a Klingon man and woman at the Gothic House.  Jason has a number of unique and offbeat Conceptual Portrait works (see them here).

Of course, we can also do our own!!  And that is the real fun of this place.  Here we got my granddaughter and grandson to pose (not too willingly mind you…)  And then I got a couple of them in myself.

Besides the Gothic House, Eldon does have a couple of murals, an old (and famous) opera house and a few other goodies….

As we left this fun little town, lo and behold, I ran into another rooster with a top hat.  Two in two days!!

After such a fun time in Eldon, it was hard to move on, but we did.  We returned north on Iowa Hwy 16 to US 34 and then continued west until Ottumwa and then north on US 63 towards Des Moines.  At the junction with Iowa163 we veered west in order to take the children to Pella to see the giant Vermeer Dutch Windmill and even get them a treat at one of the fabulous Dutch bakeries there.  This was my second time there and I am always impressed with the architecture, especially that of the Pella Opera House and the Pella “Klokkenspel”.

The Historic Pella Opera House was opened in 1900 and has gone through a number of renovations and uses.  Today it is a colorful reminder of both Dutch heritage and early 1900s architecture.

The Pella “Klokkenspel” has eight four-foot mechanical figures that perform at regular intervals to the music of a 147-bell computer driven carillon.  This is one of only a handful of animated musical clocks in the United States.  Unfortunately, we were not there during a performance time of these characters, which are held daily at 11:00 am, 3:00 pm, 5:00 pm, and 9:00 pm.  The building also adds a unique flair to the beauty of downtown Pella.

The bakeries in Pella are absolute delights.  On my last trip to Pella (see post here) my wife and I visited the Jaarsma Bakery, but on this visit Marissa and kids dropped into the Vander Ploeg Bakery, which is only about 5 doors down from the Jaarsma. Both of them offer “Dutch letters,” those crispy, flaky, buttery pastries filled with almond paste, shaped into an “s,” and covered with large, crunchy sugar crystals.  The kids loved them!!

A few more scenes from Pella:

From Pella we continued on Iowa 163 all the way into Des Moines and then on to Interstate 235.  Along the way we passed the impressive Iowa Capital building with its gold plated dome and four other domes.  One of the most impressive capital buildings I have seen in my travels.

After passing through Des Moines, we made our way into Iowa Wind Turbine country around Casey and Adair.  The Rest Area on I-80 near Casey (on the Westbound side) has a giant wind turbine blade installed.  The kids were all asleep, so we didn’t stop.  But we did get a photo of it:

Continuing westward toward Adair we could begin seeing the huge MidAmerican owned Rolling Hills wind farm, which currently consists of nearly 200 Siemens 2.3 MW turbines, making it the largest wind farm in Iowa. According to a number of reports, the state generates nearly a quarter of its energy from wind, first in the nation, and the number will soon grow as more than 600 more wind turbines are slated for installation through 2015.

Wind Turbines are massive monsters.  Unlike the old Dutch windmills (as seen in Pella), these units are about 262 feet tall from base to rotor shaft (twice as high as Niagara Falls!!). The blades are each 161 feet in length and the rotor diameter is 331 feet.

The wind farms are a boost to the economy of the counties involved as farmers and other land owners get thousands of dollars for the utilities to use their lands.  Some consider them unsightly.  I love the graceful feel of these “modern flowers” blossoming out of the fields.  With these added funds, it is no wonder that Adair, Iowa has a famous Smiley Water Tower!! The town of Adair is humorously known as “the happiest town on Earth” and its town welcome sign greets visitors with “Welcome to Adair It’ll make you Smile!”.

Adair also has a not so friendly history as it was the site of the first train robbery in the West and was also the world’s fist robbery of a moving train. The notorious Jesse James and his gang robbed a train supposedly carrying $75,000 in gold on the evening of July 21, 1873. Unfortunately for them, the shipment was delayed and they only were able to get away with about $3000 worth of gold. There is an historical park in the town that we didn’t have time to visit.  There is more about it here.

The drive down Interstate 80 from Adair to Council Bluffs is really beautiful in mid-September as the corn has turned brown, wildflowers are in bloom everywhere and the soybean leaves are turning yellow. Here are a few scenes from the road…mind you, it was late afternoon so the shadows made things even more thrilling!

Soon after hitting Council Bluffs we arrived in Nebraska and headed toward rain. We made our way to Nebraska City, the birthplace of Arbor Day.

Overall it was a great day of travel and the grandkidz had a fun time.  Rest up for Nebraska City promises lots of fun on Day 3!