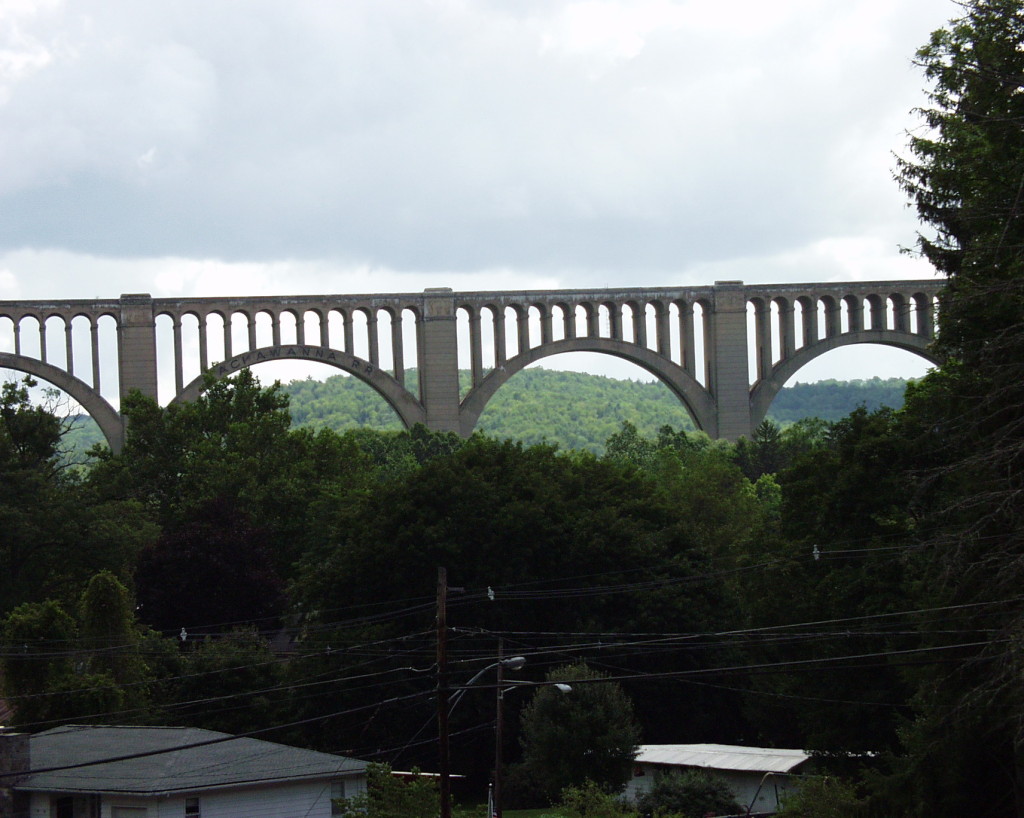 (Author’s note: This post is another in my Throwback Thursday series.  Taken from August 2008 on a visit to Bethlehem for the Music Festival to join Antsy McClain and the Trailer Park Troubadours.  I also visited a number of other sites. At the time I was still working in Woodstock, Ontario)

August 1, 2008: Instead of heading back to Kentucky for the weekend, I had the opportunity to go to Bethlehem, PA and join
Antsy McClain and the Trailer Park Troubadours for their two performances at the 2008 Bethlehem MusikFest.  I decided to make a weekend of it and visit more places along the way that I had yet to get to.  It would be a fun weekend indeed!!

I headed out early and headed southeast towards Buffalo.  My adventures for the first day would take me to the Erie Canal and the Jell-O Museum, among other places.  The map of the entire trip is below.

My first “tourist stop” along the way was Lockport, New York.  Lockport derived its name from the locks that were built on the Erie Canal through here.  It is only about 20 miles east of Niagara Falls.  Like many towns in NW New York and SW Ontario, the town was initially settled by Quakers.  In the 1820s construction on the Erie Canal was well underway and part of the route would go through Lockport.  The locks were the idea of Nathan Roberts. A sixty foot drop existed at Lockport and a way had to be devised to raise and lower the packet boats to complete the journey to Buffalo. Roberts’s idea was a twin flight of locks with five locks each. In 1823, work began on the lock construction. These locks were crucial to
the completion of the canal.

Today the town of Lockport welcomes many visitors who come to see the historic locks, which have since been improved upon considerably as technology has allowed.  When I got to Lockport I visited the Erie Locks & Canal Museum, where there was a small video about the building of the canal and locks in the area.  I then walked over to the locks.

There are tours down and through the canal from here as well as a boat tour down in the Lockport Cave. Due to time and money constraints I chose not to take them.  But I would love to have the time to take a whole day here to see the sights and history.  Maybe someday…..

The complex was built as two sets of five flights of locks (one east-bound, one west-bound) and was considered to be an engineering triumph.  These would help traverse the Niagara escarpment which dropped 60 feet in the Lockport area. Lots of early photos can be seen here.   Following are Some views of the locks in Lockport From Lockport, I headed east along the Erie Canal and made my way into Middleport, a quaint little town with an interesting restaurant and bridge.  The Original Basket Factory was begun around 1893 to make baskets for fruit farmers along the canal.  It later became a nice little restaurant.

From Middleport I continued east to Medina, NY (pronounced Ma-DIE-nah as I later found out) on NY Highway 31.  Another nice little town along the Erie Canal, Medina is the home to the
Medina Railroad Museum (which I did not visit) and is also home to a very large sculpted apple along the Erie Canal.

I went further east of Medina on NY 31 to find the only place along the canal with a tunnel going under it.  Just down the road on the left was Culvert Rd.  Take a left and it takes you directly to the tunnel. Known as the Culvert Road tunnel (or something like that), it was the only one ever on the Erie Canal and has existed here since
Clinton’s Ditch, another name for the Erie Canal. The original road culvert, on a slightly different alignment, was removed about 1854-1855 as part of the Erie’s enlargement.  The contract for the Enlarged Erie road culvert is dated October 24, 1854 and lists Conway and Slater as the contractors. The 1854/1855 Enlarged Erie culvert was substantially rebuilt or replaced as part of the Nine Million Dollar Improvement of 1895. The contract for the new structure was given to Charles A. Gorman and is dated December 7, 1896. The current road culvert represents an attempt during the Barge Canal’s construction to preserve, if unknowingly, the historic significance of the structure. The facade of the south end was dismantled and the stones numbered. It was then reinstalled at a new location to allow for the wider Barge Canal channel.

After my drive along NY 31, I headed south on NY 98 towards Batavia and then east on NY 5 into the historical town of Le Roy, NY. My main objective in visiting Le Roy was the JELL-O Museum.  This delectable bouncy treat was first developed in Le Roy in 1897 by Pearle Wait.  He was working with some cough syrup and laxative tea and then added some gelatin.  His wife called it Jell-O. The recipe was bought by a man named Orator F. Woodward in Sept. 1899. There is a lot of history about Jell-O, but perhaps the one thing that many people my age think of is Bill Cosby.

After Le Roy I headed east on I-90 to highway 14 South.  I then went south through Finger Lake country along Seneca Lake to Geneva, then on 14A to the small town of Penn Yan, which sits on the north end of Keuka Lake.  This is beautiful country.  Penn Yan is also home of Birkett Mills, known for its famous Buckwheat flour, but also known to have the largest griddle in the world.

I continued south to Corning, NY and then to Elmira and then eventually wended my way to Clarks Summit, PA (near Scranton), where I spent the night. Scranton is the home of then Democratic Vice-Presidential candidate (with Barrack Obama).  I spent the night in the Ramada Inn, which is right next to an extremely high bridge called the Freedom Bridge.  It towers 163 feet high above the town
and is 1627 feet long. At one time was known as the “Suicide Bridge” due to the more than 20 suicides that took place from the 1980s to the present.

August 2, 2008: I was off to Bethlehem this morning.  No plans to stop along the way, so I headed south on I-380 and then down US 209.  I got into Bethlehem around 10 AM and had a great time driving around the town while waiting for Antsy McClain and the band to arrive in town later in the afternoon.

Bethlehem is in Eastern Pennsylvania and is a city of about 72,000.  It was the home of Bethlehem Steel, which began in Bethlehem in  1857 but succumbed to bankruptcy in 2003.  At one time it was the second largest steel producer in the United States.  The buildings look rusty and the factory is like an old sore.  But, there is now  construction of a new casino on the site.

As I drove around the city I was taken by the cultural diversity.   There is a large Puerto Rican community, the beautiful old Lehigh University and the old steel mill.

I drove up and down the streets near the steel plant and imagined how this area must have thrived in the heyday of steel production.  Homes were tightly built in rows, with little or no yards.  Nowadays most of the neighborhoods I drove through appeared to be Puerto Rican.

Lehigh University is a beautiful old campus and has some wonderful old buildings too.

I also drove around the outskirts of town and there was nice farmland and even some geese….

Of course, the highlight of the visit to Bethlehem was the
MusikFest and most especially, the performance of the fabulous music group known as Antsy McClain and the Trailer Park Troubadours!!  The Troubs were scheduled for two nights here.  They were just a small part of dozens of performances on a number of stages.  The first night we played at 9 PM on the Liederplatz Stage.

The show was a blast and all had fun.  After the show we all crashed at the hotel.

August 3, 2008: This morning was a great time to sleep in, which I did.  The hotel was comfy, had a huge TV in the room and I just lounged until late in the morning.  Antsy and I then took a small ride around town and then back to the hotel to get ready for the second night’s show.  We played the larger Americaplatz stage at 7:30 PM and had a crowd of nearly 500 watching the show.

The band had a blast…

And of course, Sumoflam was on hand to handle the Merch and answer questions.  He Married Up!!

But more than the band, the crowds had a blast (including a number of die-hard Flamingoheads from PA and NJ!!!):

August 4, 2008: Well, as with everything else, the good things eventually go away and are done.  The two days of fun with the Troubs were done and I had to be back on the road to Woodstock again.  I chose my route home carefully so I could see one spectacular sight on the way.  So, from Bethlehem I drove north on PA 33 then to I-80.  I then drove wet to I-380 and headed north towards Scranton and eventually back to Clark’s Summit.  I exited there and headed north on US 11 towards Factoryville, which took me north along the Lackawanna Trail into Nicholson, PA.  As I drove into town I was awestruck by the amazing sight in front me.  Towering high above the town was this humongous cement train bridge.  This is the Nicholson Bridge (actually the Tunkhannock Creek Viaduct which celebrates its 100th anniversary in Sept. 2015).  It is 2375 feet long, 240 feet tall and 34 feet wide.  Yes, 24 stories tall!!!!!  The bridge was built as part of the Clark’s Summit-Hallstead Cutoff, which was part of a project of the Lackawanna Railroad to revamp a winding and hilly system. This rerouting was built between Scranton, Pennsylvania and Binghamton, New York.  All thirteen piers were excavated to bedrock, which was up to 138 feet  below ground level. Almost half of the bulk of the bridge is underground. The bridge was built by the Delaware, Lackawanna and Western Railroad and was designed by Abraham Burton Cohen. Construction on the bridge began in May 1912, and dedication took place on November 6, 1915.

Considering the immensity of this bridge, it is amazing that it was built nearly 100 years ago.  A detailed history of the bridge is here.
Following are more pictures.  I drove all around the town to get these photos and found that the best place to get photos of the length of the bridge was at the cemetery, which is up on a hill overlooking the town.  This is by far one of the greatest places I have “discovered” on my trips thus far.

After the magnificence of the viaduct, I then had to head north.  I went through a town called Hop Bottom and then on the way up to New Milford. Hop Bottom got its name from the hops that are  grown in the area.  New Milford had an interesting library…

I also made my way through the Finger Lakes of New York.  Along the road north of Ithaca I saw a sign about Taughannock Falls. I knew nothing about this waterfall, but the viewpoint was just off the road, so I took a little jaunt to catch a peek.  The Falls have a drop of about 215 feet and is one of the highest waterfalls in the eastern U.S. It was an amazing sight, but unfortunately the light was not at the best angle for a good photo.

Beautiful scenery, but no time to stop along the way…

Some roadside guidance provided by……