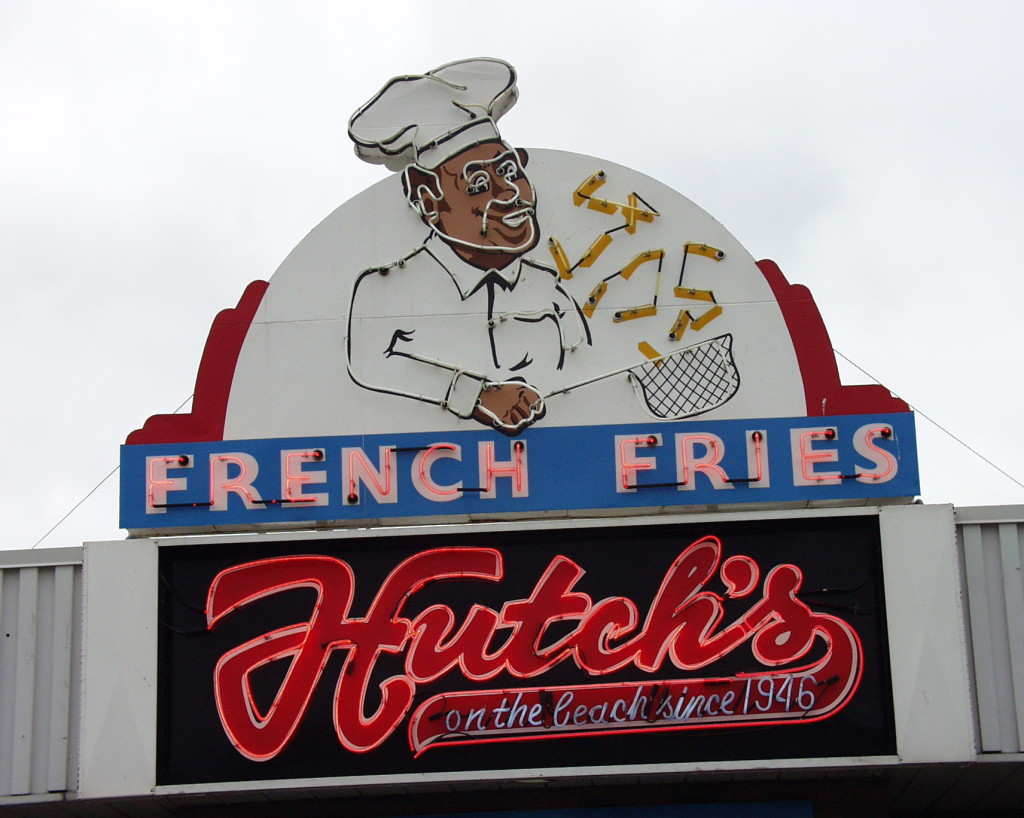 Everywhere I go I see old neon.  These signs remind me of the my youthful days in the 1960s and 70s when we traveled.  Alas, for many, the only signs they see are the same unoriginal fast food, gas station and motel chain signs all over the place.  But, in the by gone days there were few McDonald’s and Motel 6 spots.  Instead, there were the little cozy motels with the old metal chairs in the front and the unique neon signs.  There were the local burger joints with their big shiny signs.  And there were the drive in movie theaters and the downtown theatres with their unique names.  Here is a trip down memory lane with neon I have captured along the less beaten paths and just a few comments, when appropriate.

Of all of the unique neon signs, perhaps the hotel and motel signs are the most fun and bring back the fondest memories.  My first ever motel stay was in some non-descript motel in Amarillo, Texas in 1968.  At the time I was only 12.  It was exciting to sleep in a motel bed, see the paper covered drinking glasses, taste the strange tasting water, sit on the metal rockers on the front porch.  We watched the news and stock reports on the local television and ate pancakes at a local cafe before heading to our new home in Richardson, Texas (we were moving from Albuquerque, so yes, we were on Route 66 back then).

And to round off the trip, how about one of the more famed ones….

After a nice evening a a comfy motel, what is better than starting the day off with a great breakfast at a diner, a pancake house or a local cafe. The servings are always big, the mom and pop service is better than any fast food joint.  Of course, while on the road you can also stop for lunch and even a big dinner, in some cases even more than you can manage if you are willing to take the chance (think Amarillo, Texas!!)

How about some burgers for lunch?

Don’t want a burger or a corn dog?  How about a Maid-Rite Sandwich?

Or perhaps some great authentic Bar-B-Q?

And a little Ice Cream for an afternoon treat….

Okay.  So this next one is not neon.  But it is certainly Vintage.  And who can resist stopping for an ice cream at a place that LOOKS like an Ice Cream?

There are lots of places that you can get dinner…many of the old neon places are a combo bar/grill or bar/restaurant.   And many have unique signs.  Personally, I don’t drink alcohol, but I have certainly enjoyed a few good meals at some of these kinds of places.

And let’s not forget two of the most iconic vintage neon places for travelers….

Maybe you prefer something a bit more ethnic in the evening….

Or perhaps just a late night Philly Cheese Steak?  How about two choices and they are just across the street from each other in the triangle….(I actually tried one at each place on the same evening – add the whiz!)

Perhaps you have had a long day on the road and need a break from motel room TV.  A visit to an old drive in theater with some popcorn and thus fuzzy little speakers hanging in your window will do ya.

Too cold outside?  Then there are some classic old movie theaters around that show some cool movies or maybe even will have a live band playing in them. Many of the old theaters are multi-purpose nowadays, but their old neon signs still draw you in and bring back the memories of 1960s childhood.

Following are a few classic looks with neon I have seen over the years as I travel the back roads of America.

VARIOUS AND SUNDRY OTHER PLACES

Sure, I meant it when I included “Sundry” in this section.  That term seems old fashioned now, but the old five-and-dime shops had “sundry” items.  There were also the old drug stores that sold magazines, had fountains in the shop and they sold “sundries.”

I also include the “various” in here since there are a few odds and ends neon signs that I  want to include in this section.

Now, wasn’t that just a yummy adventure through the past? 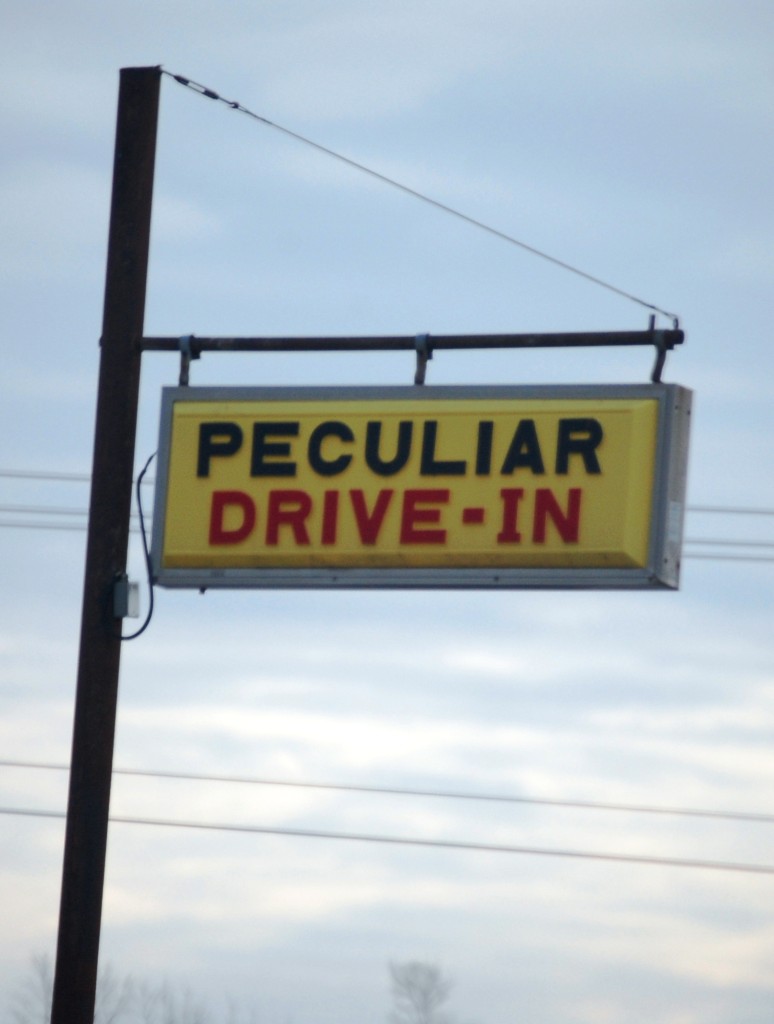 As I have traveled the many back roads of the U.S. and Canada I have seen hundreds of places to eat, many of the are the normal fast food places (we all know THEY are).  But, there are also many other unique Mom and Pop shops, small drive ins, BBQ joints and burger places.  I have covered the main stops from my last 8 or 9 years of travel, but there are many more I have passed along the way and a few that I didn’t cover in the previous three posts.  I will touch on them here, though most of them with a photo and a comment or two.  Enjoy!

The Leftovers – More of the Places I have been

I ate here in early August 2012.  It was across the street from my hotel near Atlanta and I love good Mexican food.  This is one of those places frequented by the migrant Mexican laborers.  No English spoken here.  But, the food is AMAZING and the cost was excellent.

The Huevos Rancheros is made with a very spicy green sauce.  In fact, the lady there kept apologizing to me and I kept telling her that “picante” is better.  I grew up on hot stuff.  But, the faint of heat may want to avoid this one and get the tacos on fresh corn tortillas instead.

My wife and I visited the Poke Sallet Festival in Harlan, Kentucky a couple of years ago and, of course, while there we had to try out some Poke Sallet (The term is an old Southern reference to the cooked young leaves of the poke weed. Sallet comes from Middle English and refers to a mess (another Old or Middle English term) of greens cooked until tender.)

Not every place you stop to eat at is a real building.  There are those food wagons and trucks that serve a variety of goodies. There are plenty in Canada as well.  I frequented one place in Paris, Ontario just for the one and only thing he made – poutine. Poutine is a common Canadian dish (originally from Quebec), made with french fries, topped with brown gravy and cheese curds.

Poutine must be the original heart attack on a plate (or styrofoam container).  The rich mixture of thick brown gravy and melted cheese curds on top of a heaping pile of greasy fries is yummy and fattening as can be.

Speaking of interesting food, how about Pea Meal?  Yes, that is another Canadian specialty.  I got my best taste of a Pea Meal breakfast at the

Pea Meal is actually a type of bacon that can be found in Ontario.  The name reflects the historic practice of rolling the cured and trimmed boneless pork loin in dried and ground yellow peas, originally for preservation reasons. Since World War II or so, it has been rolled in ground yellow cornmeal. It is low in fat, and slow cured and really really good!! I thought I could not find anything as good as sausage from our local producer. They take choice meat, order casing from dcwcasing.com/ and produce sausage that reminds me of a homemade dish.

Some Interesting Places I Should Have Visited

The above two places may be peculiar and even uncertain, but get a load of these three Chinese restaurants I have come across in my travels…

I think Hung Far Low is a real winner for a Chinese Restaurant name.  By the way, it is only about 2 blocks away from Voodoo Doughnut in Portland.

Then there are the American places with odd names like Stinky’s (above) and those below.

We all know about Popeye’s Chicken, but, how about Wimpy’s Hamburgers?  I’ll gladly pay you Thursday for a hamburger today 9though I’ll bet that deal doesn’t work at this Wimpy’s!!)

I hope they aren’t making BBQ Frog….   And how about a few more places….

Eat in a caboose at Choo Choo!!

Apparently there is another Choo Choo Bar in Omaha, Nebraska.  No relation to the one above.

OK…you gotta go to Hell (MI) to eat here….and here is what they offer you….

And here are a couple more places

This is the home of the Holey Burger, but they also have hot dogs and ice cream cones.  Yum…

Then, there are the BBQ places that I wish I could hit up.  These have some great names…

Soulman’s mantra: ‘We’re Not Stingy With Our Meat!”

And the famous neon cowboy on top of it….

And finally…how about the Chuckwagon?  They have a “4 Meat Buffet”