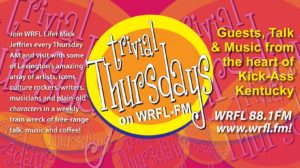 Had a fun time interviewing with Mick Jeffries, the long-time and award-winning host of WRFL-FM Radio “Trivial Thursdays” this morning.  In case you missed it, here is an MP3 Audio file of the broadcast, courtesy of WRFL and Mick…edited by yours truly.  Also in the studio with us was Leif Erickson.  Great to meet and mingle with these two.  Mick even surprised me by playing an Antsy McClain song during the interview.  It is included below.