After a long day of travel to Washington via Delta Airlines, first to Salt Lake City and then into Seattle-Tacoma Airport, and then a good nights rest, we had the opportunity to spend a day in Seattle with the family.

Since my daughter Amaree and her family live in Port Orchard, we had to take ferries across the Puget Sound to get to Seattle. We started with the Port Orchard Foot Ferry Service that took us from Port Orchard into Bremerton. Then we got on the Bremerton Ferry which is a much larger ferry that also carries automobile traffic and enjoyed the one hour boat ride to Seattle.  We rode on the M/V Hyak, which can carry up to 2000 passengers and as many as 144 cars.

It was a beautiful day, probably in the 80s and sunny as can be. Prior to our trip Julianne and I had created T-shirts for all of the family so that we would be color coordinated and easy to find. These “safety green” T-shirts were very easy to see and it was fun throughout the day to get the comments from people.

I enjoyed sitting on the outside deck as we travel to cross the sound and loved watching the waves, the birds and other things.  We got to a point where a couple of people and brought food to feed to the seagulls,  who would swoop down and grab the food right out of these people’s hands. It was fun to see all of the seagulls up so close. I was able to grab some amazing photographs, some of which are posted below.

From the ferry deck we could not only see Seattle, but off in the distance we could see the beautiful cone shape of Mt. Rainier.  Even in the heat of July it was covered with snow and glaciers.

As we approached Seattle, I could see the full expanse of the city and over to the south I could see the Space Needle clearly.  The Seattle city scape is certainly a beautiful one.

Finally, we all arrived safely at the port and disembarked from the ferry into the crowded waterfront area of Seattle. This section of Seattle is certainly built to accommodate tourism. There is a giant Ferris wheel, called the “Seattle Great Wheel“, a couple of fun shops/museums, plenty of fun eateries, lemonade stands and much much more.

Our first stop once we hit the sidewalk was Ye Olde Curiosity Shop. Julianne and I had the opportunity to visit this place a few years ago when we were in Seattle prior to taking a cruise to Alaska. But, honestly, it was much more fun with all the grandkids being able to see all of the odd things in this museum/store.

Always the sucker for oddities, the store for that craving with some of the strange creatures that they have on display along with many of the unique items that were for sale in the store. 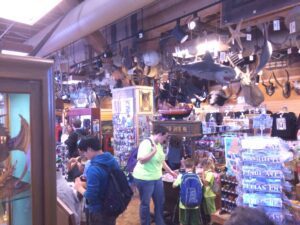 Ye Olde Curiosity Shop got its start when Joseph Edward Standley set up his curio and souvenir shop on the waterfront in 1899.  Back then Seattle was a rough ‘n’ tumble town. Even at that time, Standley’s shop presented a jumbled mix of curiosities and significant art objects. He collected and sold what came his way, but also had local Native American artists make objects to his specifications. 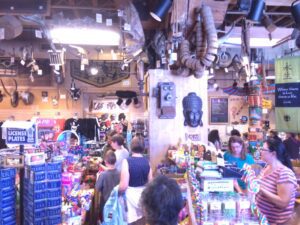 He sold genuine Tlingit totem poles, but also replicas by carvers descended from the Vancouver Island-based Nuu-chah-nulth tribe, who were living in Seattle, and even inexpensive souvenir totem poles made in Japan. A flair for the bizarre and grotesque led him to include items such as shrunken heads from the Amazon (some of them definitely genuine, others probably not). It is certainly a must visit location if you are in this part of Seattle!

We then continued to walk towards the area where the Pike Place Market is located. Along the way we passed eateries, shops and the Great Wheel. We skipped by most of these places but did take stops for a quick break. All down the path there are cornhole games and other things that are set up for people to just stop and play and we did so.

Another place of interest that we did not stop at but probably would’ve enjoyed was the Seattle aquarium. That will have to be on our agenda for the next trip. We had planned to visit the aquarium in Tacoma later in the week, so we skipped this particular venue.

At that point you can cross the street towards Pike Place Market, and visit the rather unique parking squid. This squid sculpture was made specifically for parking in attaching your bikes which makes it a rather unique item. As always, I am always looking for unique sculptures and so we stopped for a photo opportunity with the kids and I got another photo of this.

This unique utilitarian sculpture by Seattle artist Susan Robb, was commissioned by the Seattle Department of Transportation in 2009 and installed in 2012.  It was originally installed on the north side of the EMP building in Seattle Center, but was eventually moved just outside of the Pike Place Market parking garage (the Pike Street Hill Climb) across the street from the Seattle Aquarium.  The structure is made from galvanized steel and is a fun addition to a walking tour.

On our way up to Pike Place Market (we took the elevator instead of the Pike Street Hill Climb), we just happened upon the World Spice Market. What a fabulous little shop! If you like spices this is the place to go because they have everything.

The shop is set up more like an apothecary with jars of spices along the walls and in bottles and jars throughout the store. You can open each one and take a whiff of the spice and then you request what spices you want and in some cases they actually grind them up for you fresh.

We finally made our way to the entrance of Pike Place market and took a quick stop with Rachel the Golden Pig, which is one of the famous pieces of artwork associated with this world renowned farmers market.

Naturally, since it was the end of July and everyone is on vacation and touring Seattle, the Pike Place market was packed to the gills! To go anywhere it was bump and grind all the way.

Despite the crowds, we were able to still enjoy some of the fun things of the market including the well-known fishmongers to throw the fish across the way yell out the customers name etc.

My grandkids, especially little Charlie, being smaller, were able to weasel their way up to the front and I soon saw Charlie playing with the crawfish, which were still alive. Fortunately, I was able to squeeze in and get close enough to grab a couple of good photos!

Here are a few more random photos I got at Pike Place Market.  Such a unique and fun place (other than the crowds). 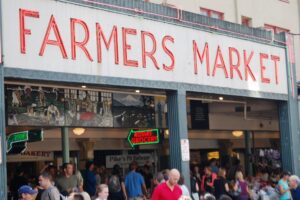 The Pike Place Market seems to go on forever and there is not a place to sit down anywhere along the way and so it got to be very tiring. We finally did get out of the market and walked down to a large park it did have plenty of seating.

After a brief rest, we decided that we would venture to the point where we can catch the large duck boats and Ride the Duck. even this was about a mile away and a good part of it was uphill, towards the terminus of the monorail station.

Along the way we walked by numerous shops including the origina Starbucks. Starbucks is now all over the place, but this was the first one and I have a picture showing I’ve been there!  Here are a few more random scenes from our walk.

I should note that the Hammering Man, by artist Jonathan Borofsky, is one of many artworks around Seattle.  Borofsky has installed the Hammering Man in other places around the world as well. This one is 48 feet tall and is directly in front of the Seattle Art Museum.  I have visited other works by Borofsky in Council Bluffs, Iowa (Molecule Man), in Pittsburgh at Carnegie Mellon (“Walking to the Sky“) and the “Man With Briefcase” in Fort Worth, Texas.  I love the simple grandeur of his art and hope to see more in the future.

Ride the Duck in Seattle

After the rather grueling walk up to the monorail station area, it was really nice to have a seat and relax for nearly an hour before our ride was to take place. 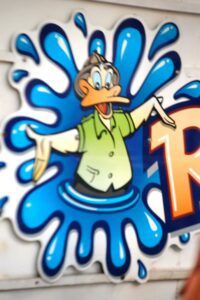 Throughout my travels, I have seen the “Ride the Ducks” boats in a few places over the years. I specifically recall seeing one Ketchikan, Alaska, but I’ve also seen them in San Francisco, Stone Mountain (Georgia) and Branson (Missouri). I had never ridden one, so I didn’t know what to expect.

After the wait, we finally were able to board our “Duck” adventure.  We were in for a load of fun!!

First off, a little history about the “Ducks.”  The DUKW (D-built in 1942, U-amphibious 2-ton truck, K-front wheel drive, W-rear wheel drive) was an amphibious landing craft developed by the United States Army during World War II. It was designed to deliver cargo from ships at sea directly to the shore. DUKWS are street legal to drive on the roads and are also legal to drive on water as recreational boats. (See more history here)

Our ride on the Duck was fun.  We had a great driver – Captain Mandy Lifeboats.  She was full of energy and pulled a few tricks out of her hat…or was it she pulled a few hats out of her tricks?  She was both wacky (and even quacky!!)

Our Duck Tour took us from the Seattle Center, where the Monorail begins.  We drove up along Lake Union and had some nice views from the Aurora Bridge.  We then made our way INTO the lake and cruised around the lake.  We saw the floating home from Sleepless in Seattle, and a few other ritzy lakeside homes, not to mention multi-million dollar yachts. We also had a great view of the skyline.

From the lake we drove back towards downtown past the Space Needle, the EMP Museum and then towards the downtown shopping area and along the waterfront. Overall the ride lasted about 90 minutes and we had a frolicking good time.  There were times we all “quacked” at passersby, sang songs, had fun Disco Music and more.

What I enjoyed about this ride was the opportunity to see Seattle without all of the walking!  And it gave a flavor of some of the places we can see on our next trip out there to see the family.

After the Duck Ride was over, we walked the mile or so back to the Ferry Dock to catch the ferry back to Port Orchard.  We were all quite exhausted, but made it in time and enjoyed the ride back.  And we were blessed with a wonderful sunset leaving its mark on Mt. Rainier. It was a splendid, though tiring, day.