In late May of this year I finally had an opportunity to hit one of my “Bucket List” sites – Carhenge in Alliance, Nebraska. This “Car Art” site (see my post on Car Art from last August) ranks up there with the other well known sites, Cadillac Ranch, in Amarillo, Texas and the former “Spindle” (Cars on a Spike) by Dustin Shuler that was displayed at Cermak Plaza in Berwyn, Illinois until May 2008. 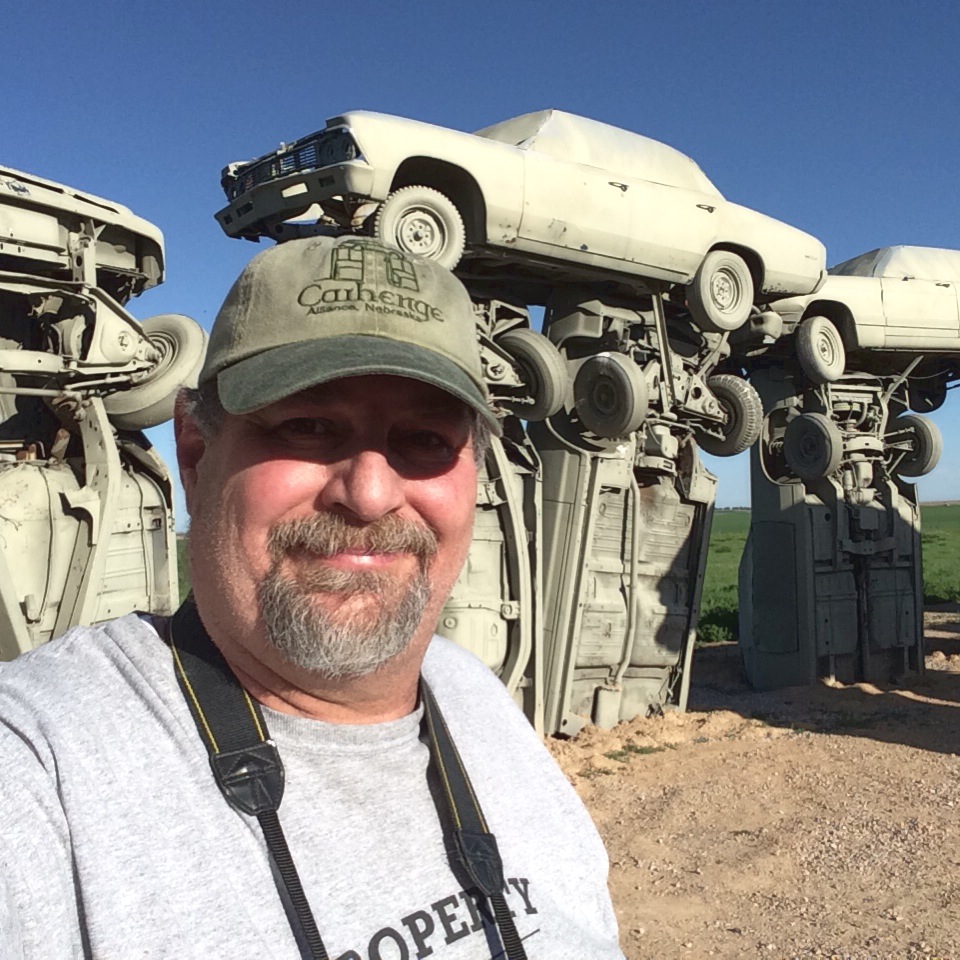 Sumoflam at Carhenge in Alliance, NE in May 2014 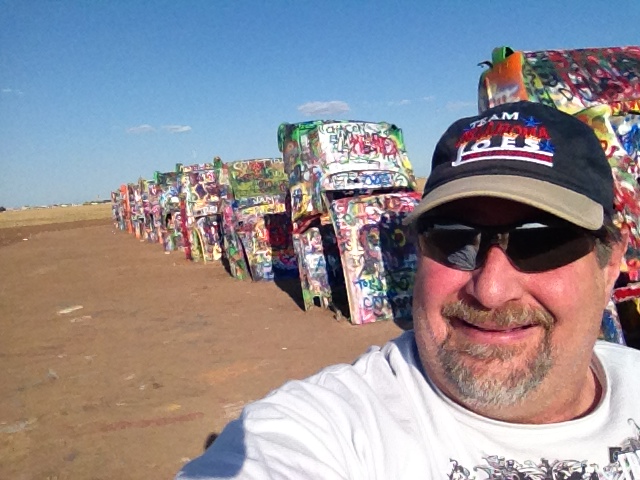 Sumoflam at Cadillac Ranch in Amarillo, Texas in August 2013 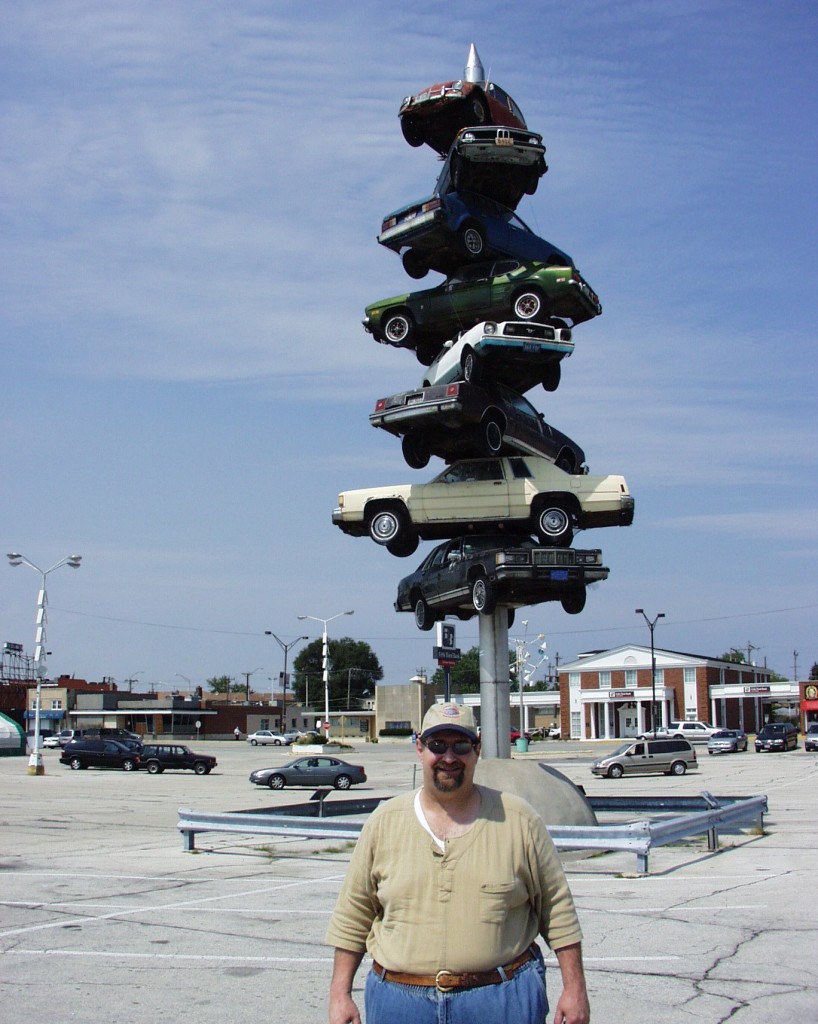 Unlike Cadillac Ranch, which is set up on a farm in Amarillo, Carhenge is actually owned by the city of Alliance, Nebraska and is touted as one of their main tourist attractions. 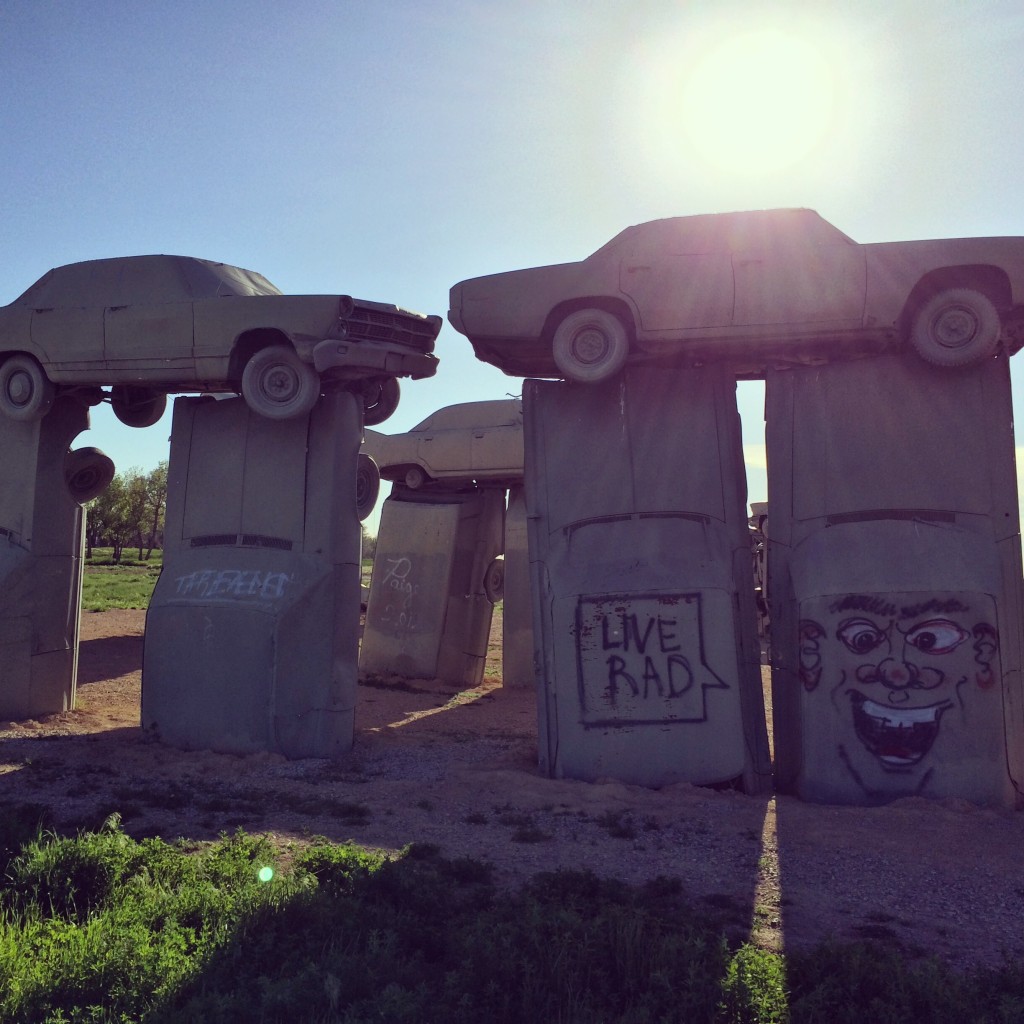 My trip to Carhenge was on the the next to last leg of my return trip home from Montana (see the full day’s post HERE). I pushed hard to get here from Cody, Wyoming via Douglas (the Jackalope Capital of the World) and then finished the day off with a two hour drive along Nebraska Route 2 over the Sandhills to get to Grand Island for the night. 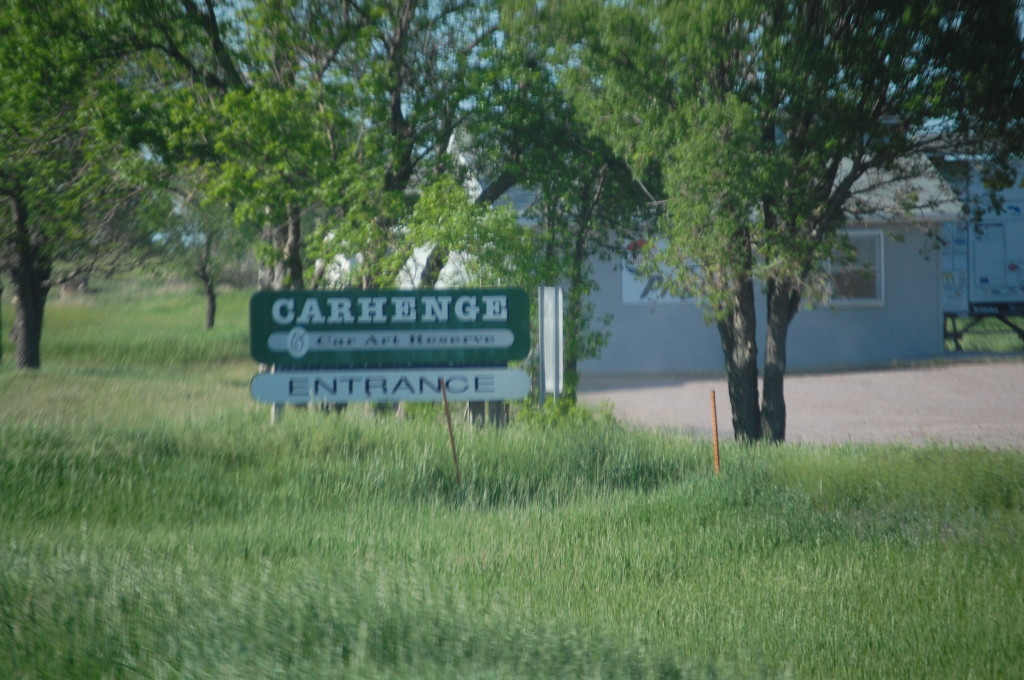 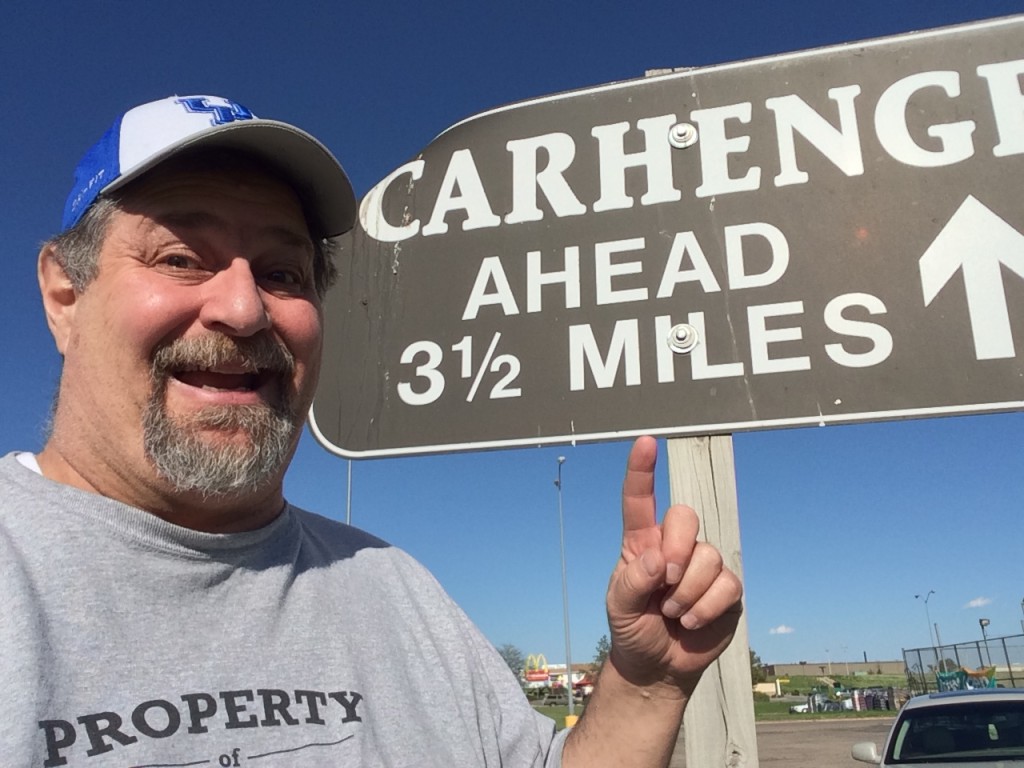 This way to Carhenge

This unique piece of Car Art is the brainchild of Jim Reinders who completed the work in time to dedicate it on the June 1987 Summer Solstice. Reinders conceived it in 1987 to be a memorial to his father. While living in England, he studied the structure of Stonehenge, which helped him to copy the structure’s shape, proportions, and size. 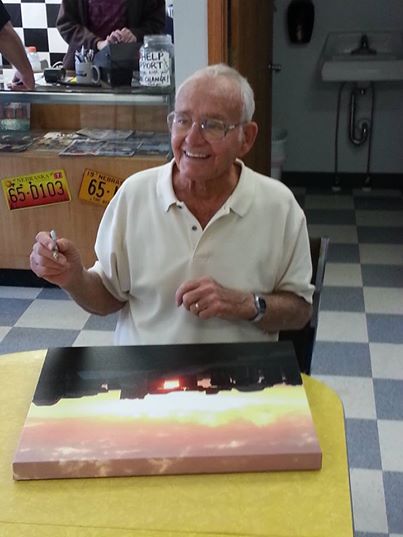 There are other automobile sculptures that have been added to the the area around Carhenge and the additional name of Car Art Reserve was added for these.

Carhenge consists of 38 automobiles arranged in a circle measuring about 95 ft in diameter. Some are held upright in pits trunk end down, and arches have been formed by welding automobiles atop the supporting models. The heelstone is a 1962 Cadillac. Three cars were buried at Carhenge. Their “gravestone” is a car that reads: “Here lie three bones of foreign cars. They served our purpose while Detroit slept. Now Detroit is awake and America’s great!” 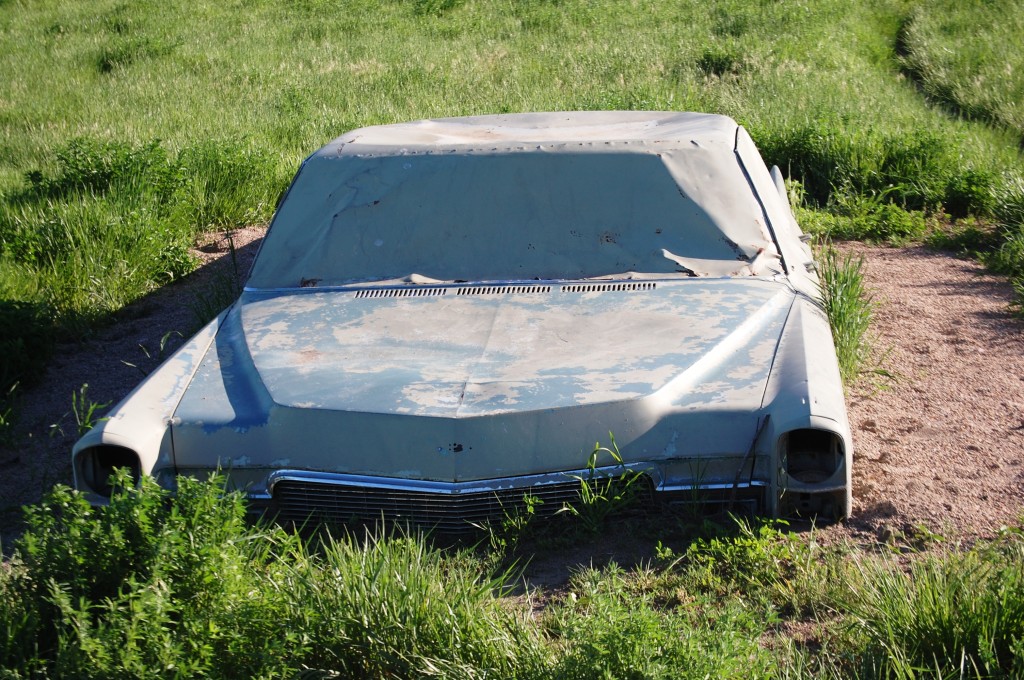 After the long drive from Cody, I arrived at Carhenge around 6 PM CST as the sun made its way down.  There were many nice shadows cast.  I dropped in to the small Visitor’s Center and saw that they needed a license plate donation (chuckle)…I pulled out one of my old MARDUP license plates, signed the back and donated it to Alliance employee Beau at the Carhenge Gift Shop. 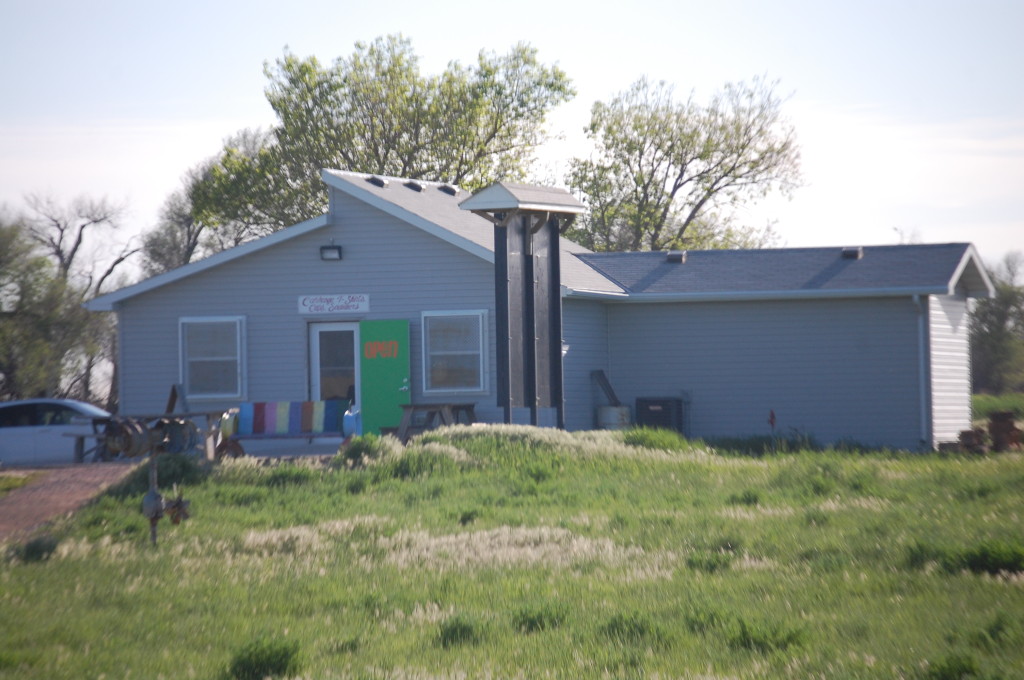 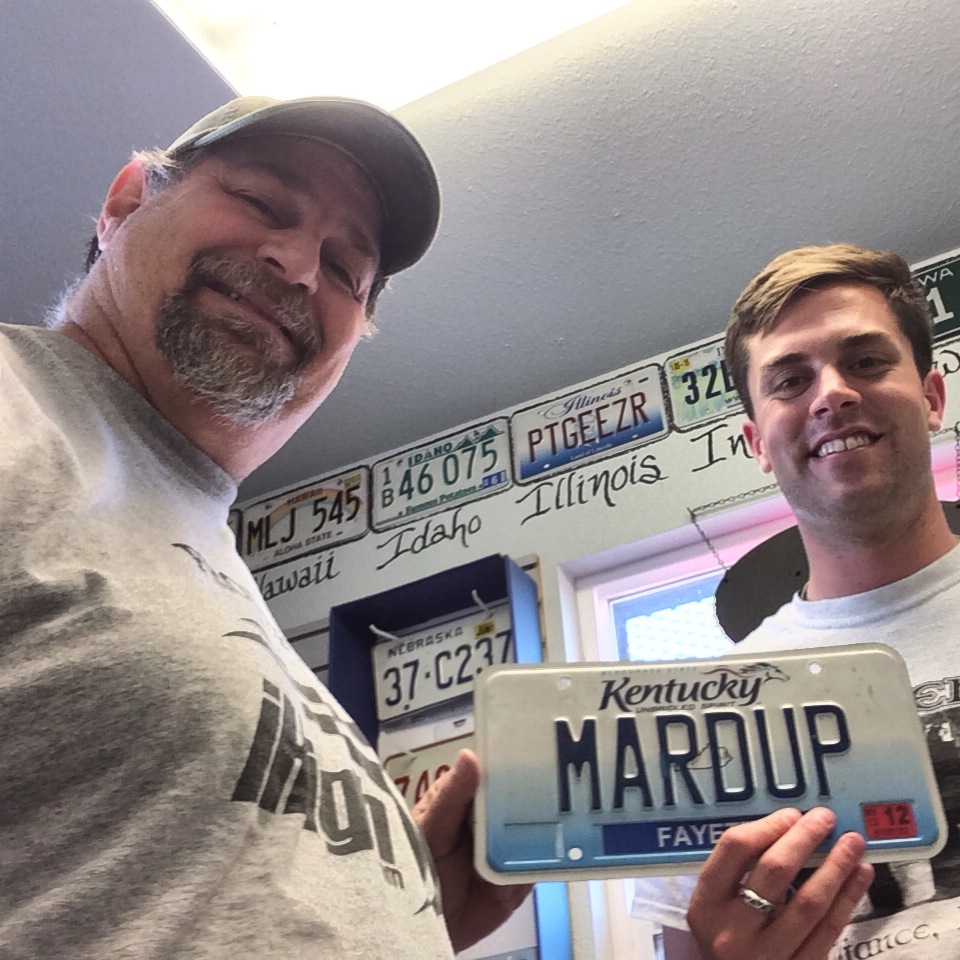 I also had fun trying out a new app while at Carhenge…my 360 Panorama App…here is what I got….

As I noted above, the actual Stonehenge like circle has 38 cars.  I tried to capture a few of them in some of the photos below: 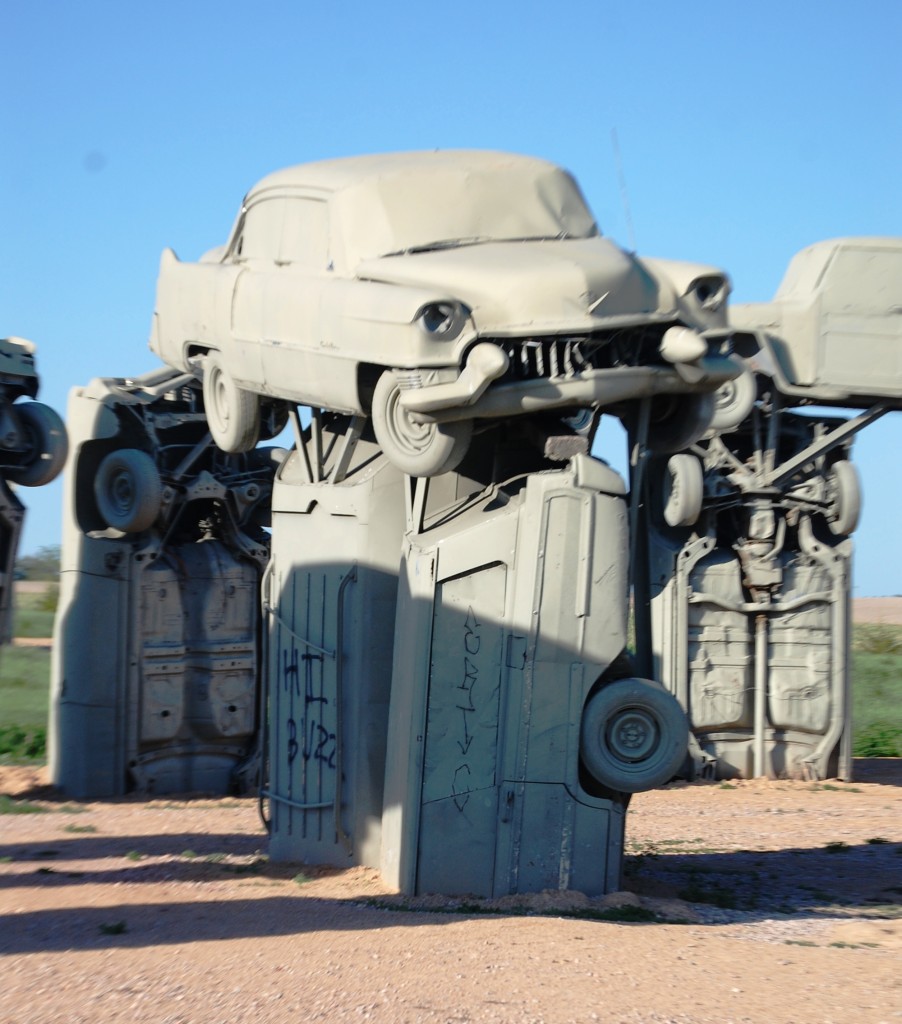 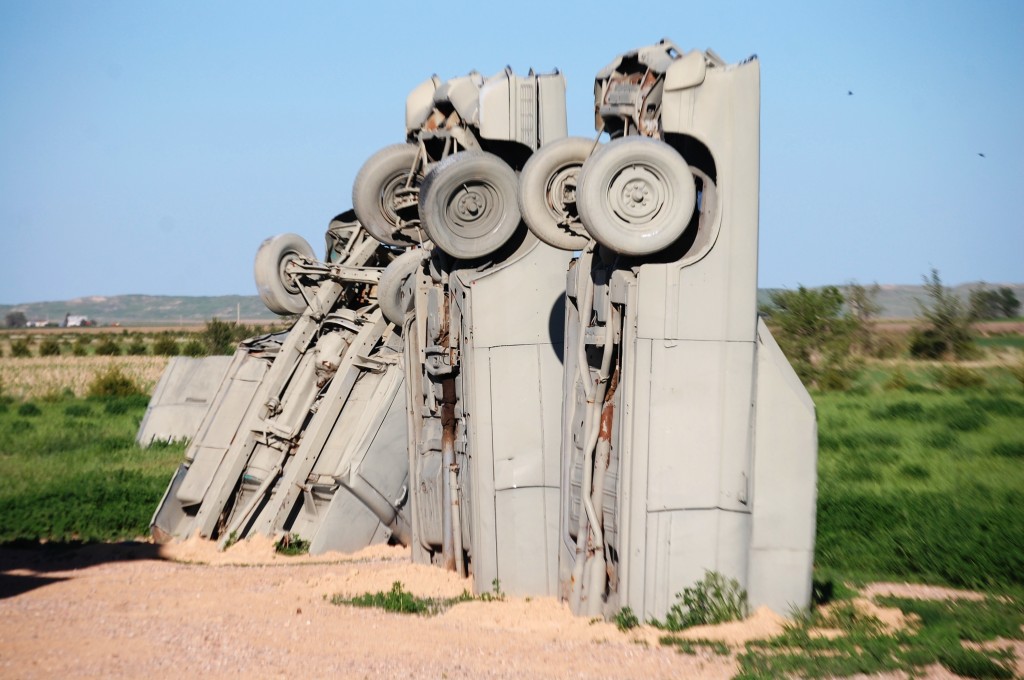 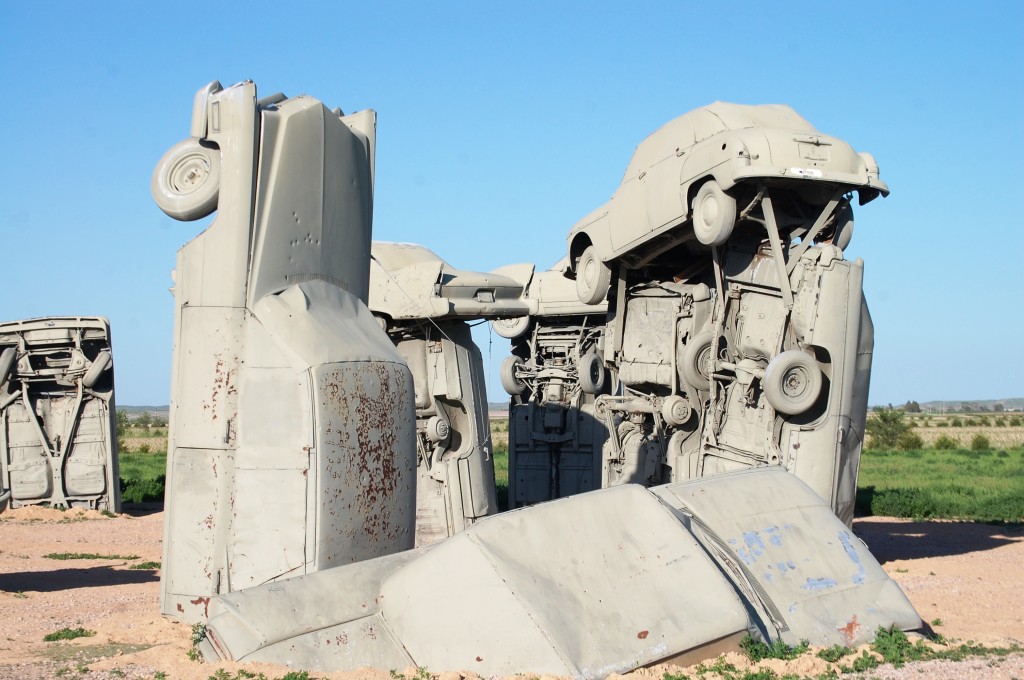 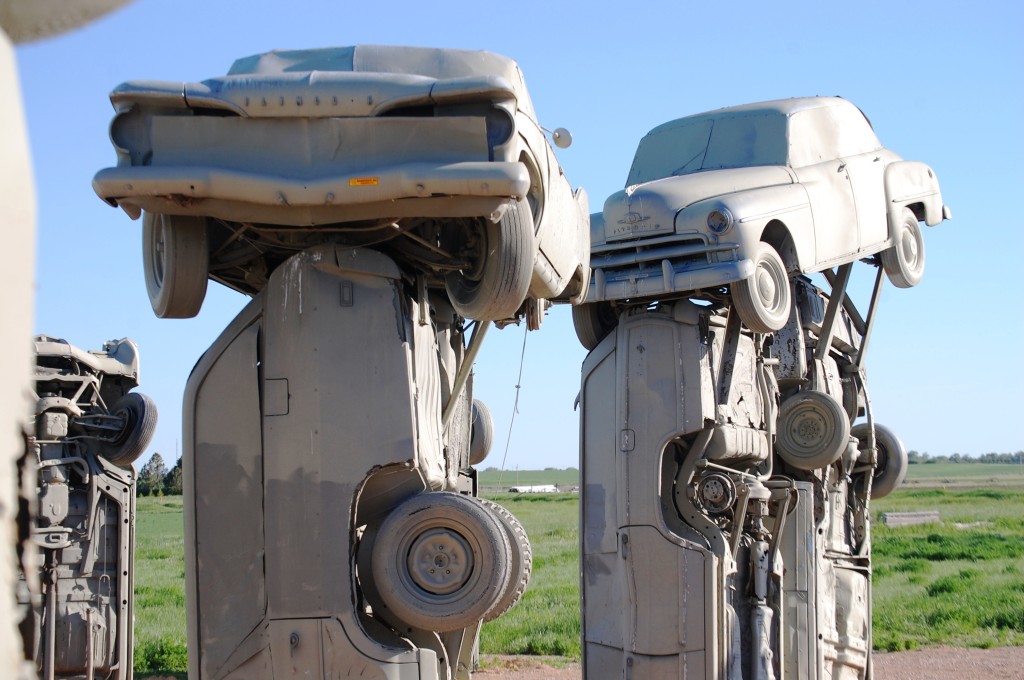 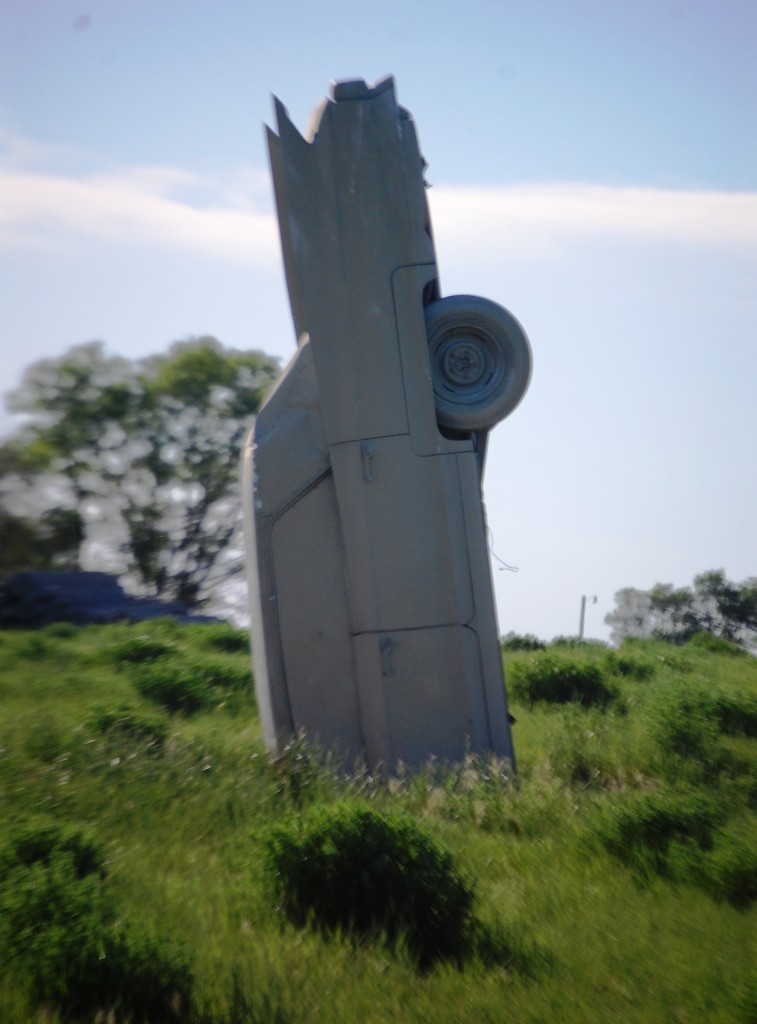 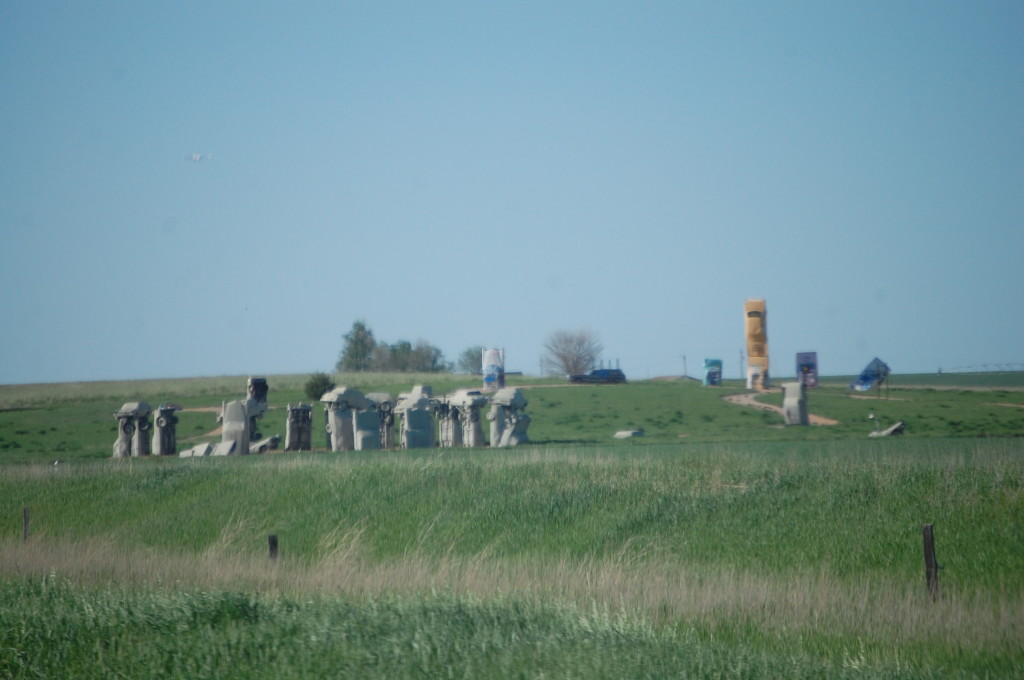 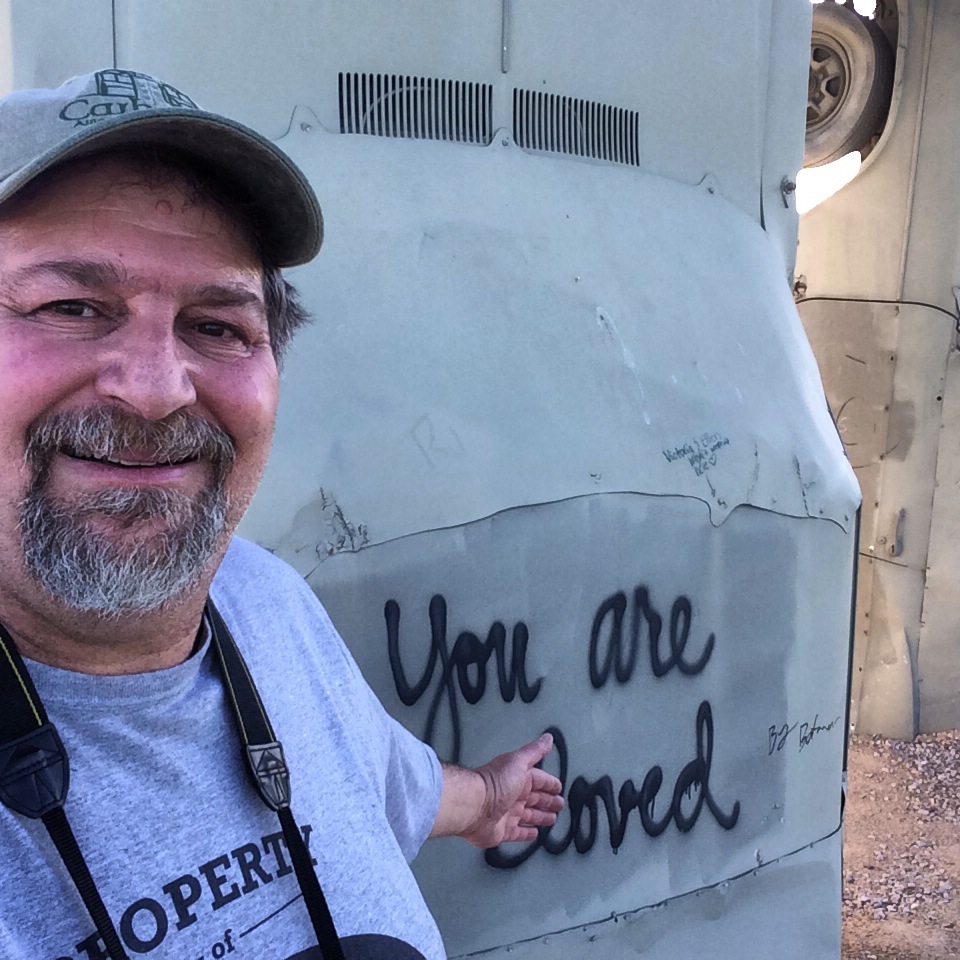 You are Loved at Carhenge

Ironically, cars are not the only feature at Carhenge.  There are a couple of cool sculptures made from car parts.  Of course, my readers know I love scrap metal art. 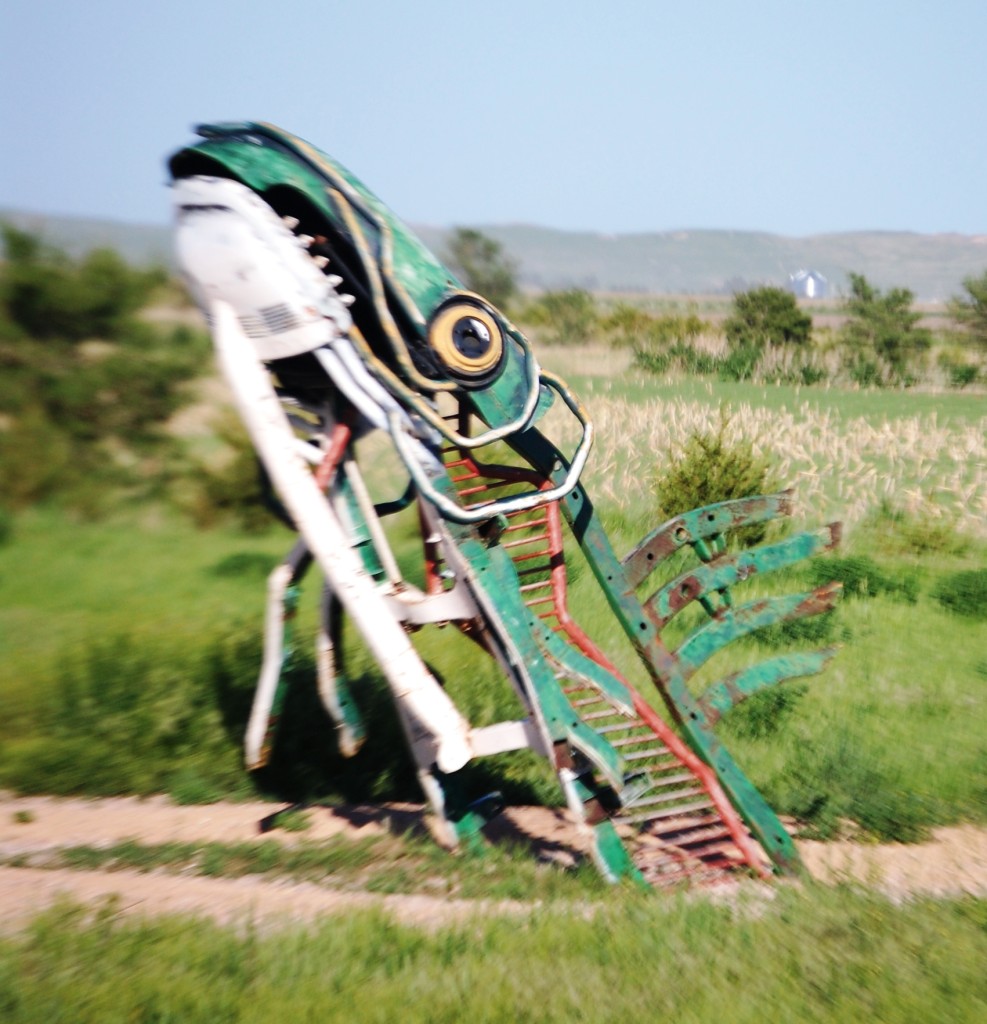 One of the first sculptures to be added to the Car Art Reserve is a sculpture of a spawning salmon created by 29 year-old Canadian Geoff Sandhurst. 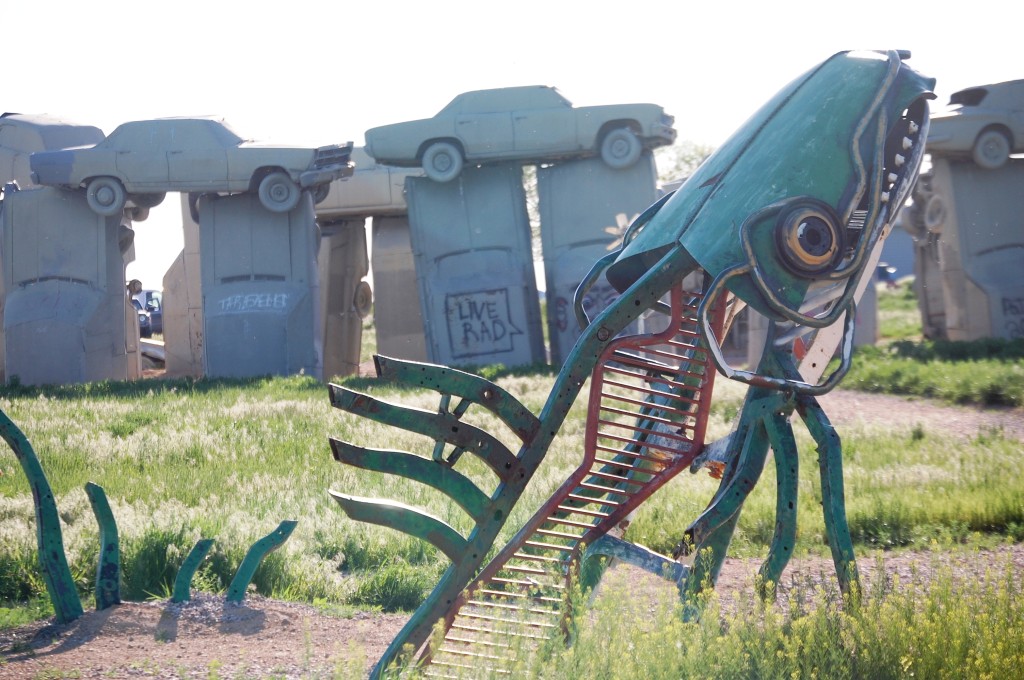 Spawning Salmon with Carhenge in background 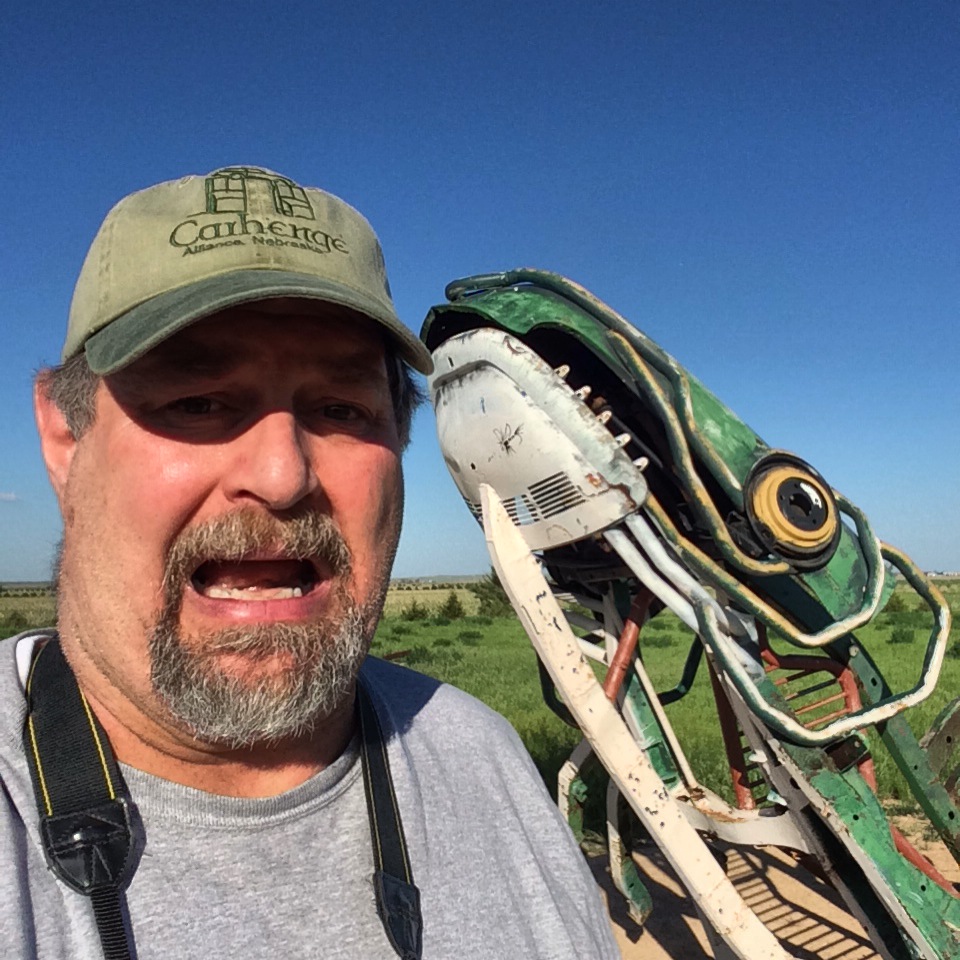 Then there is a fifteen foot metal dinosaur that overlooks Carhenge 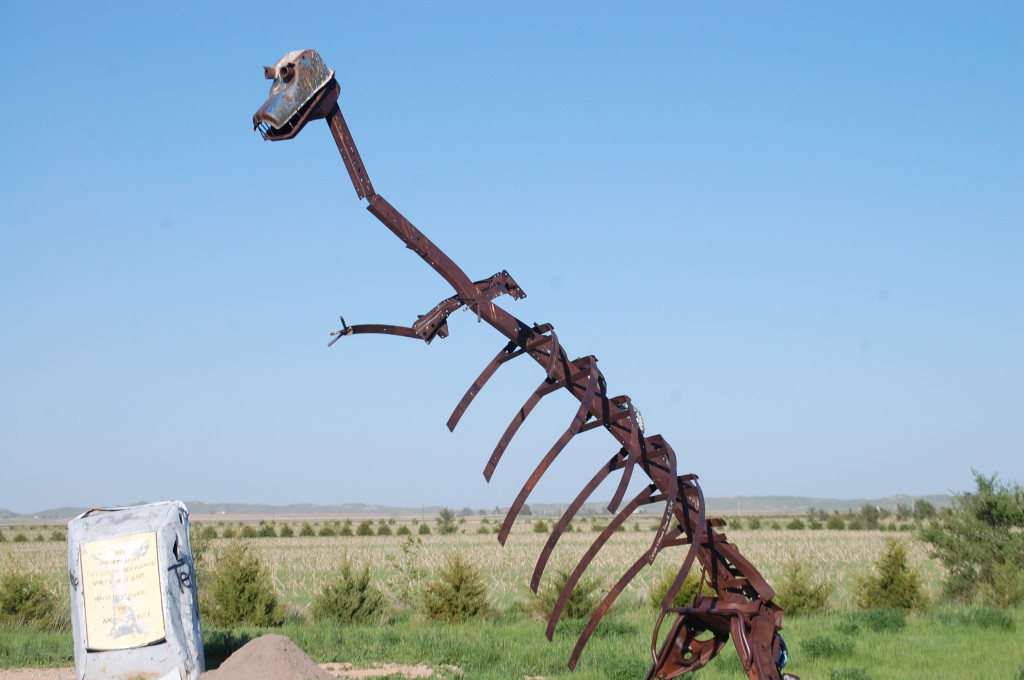 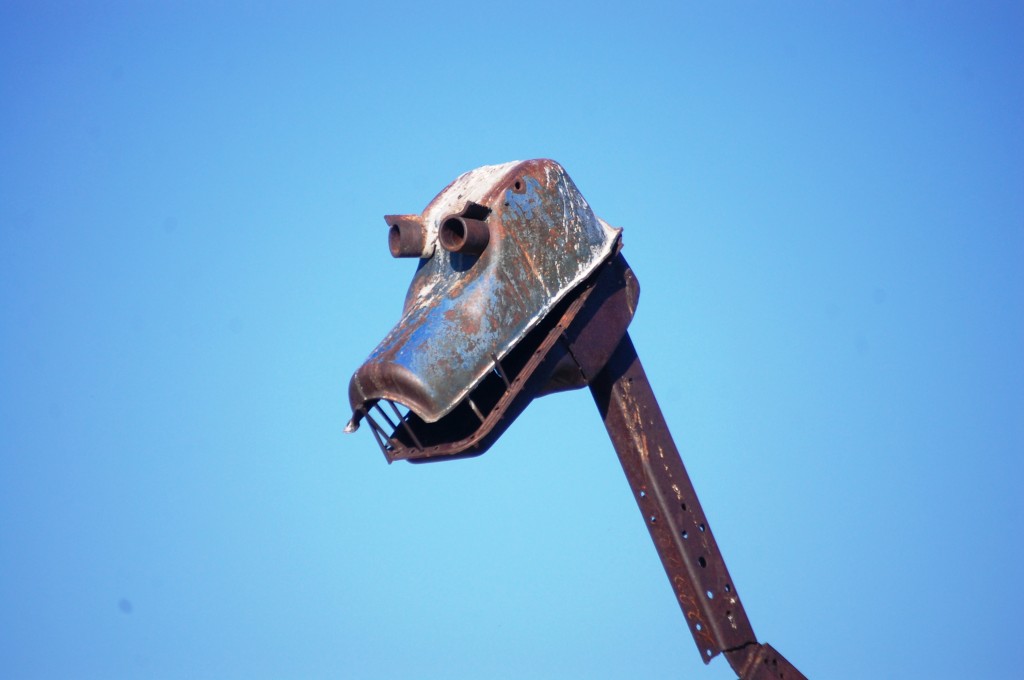 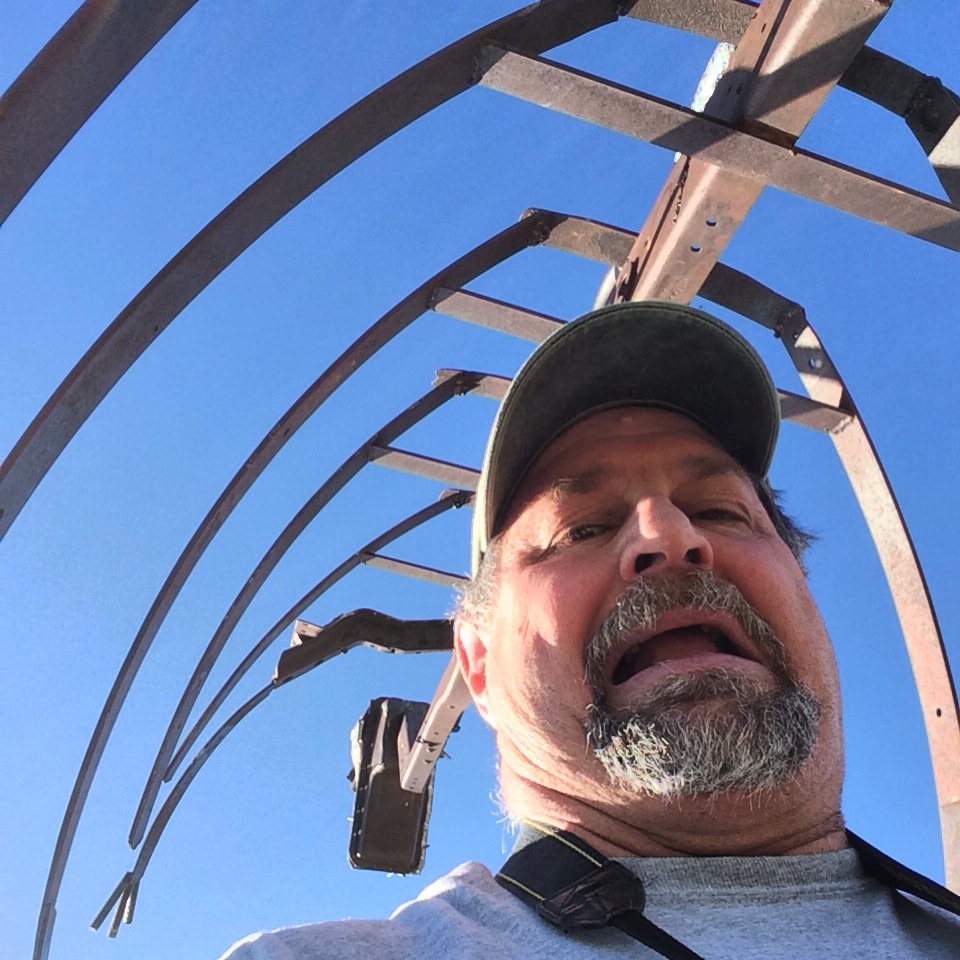 In the belly of the beast!

Reinders created a second set as part of the Car Reserve called “Ford Seasons.” It is comprised only of Fords and was inspired by Vivaldi’s Four Season. It was meant to suggest the Nebraska landscape’s seasonal changes as wheat is planted, grows, is harvested, and then the field lies barren during a windy winter.

And finally, a few more scenes from Carhenge as the sun went down and I had to be on my way…. 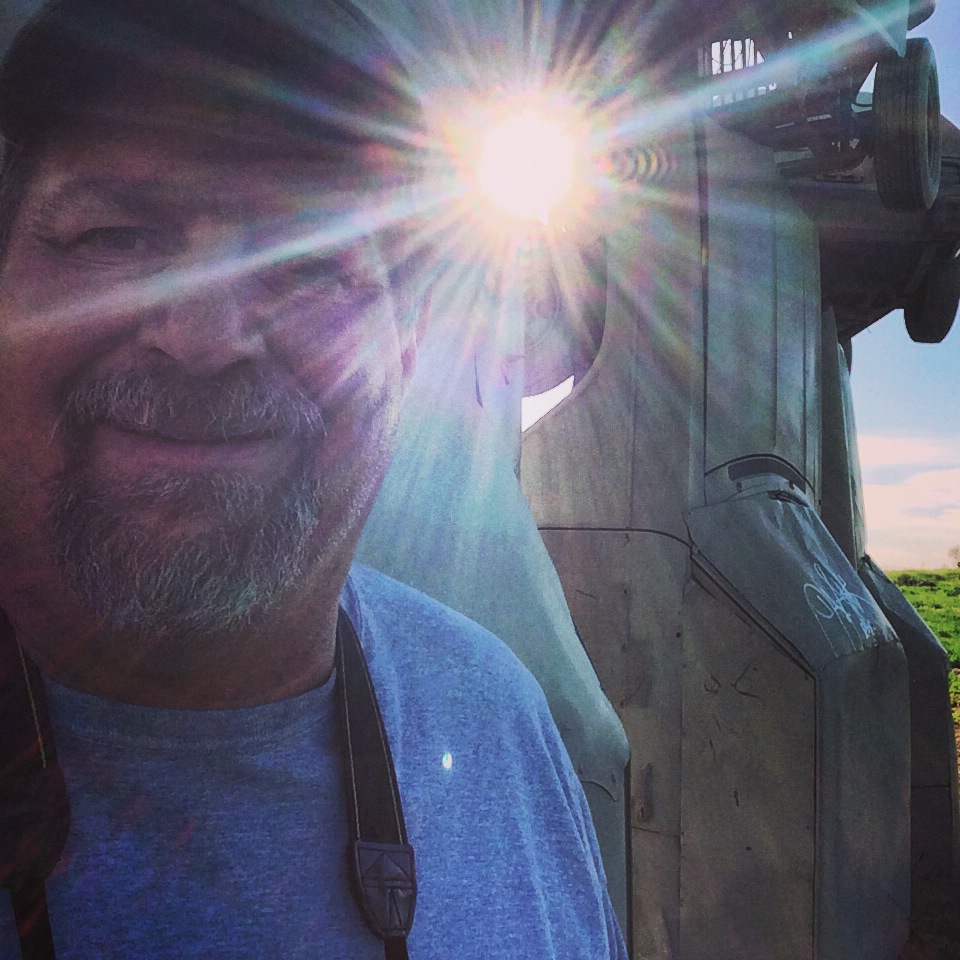 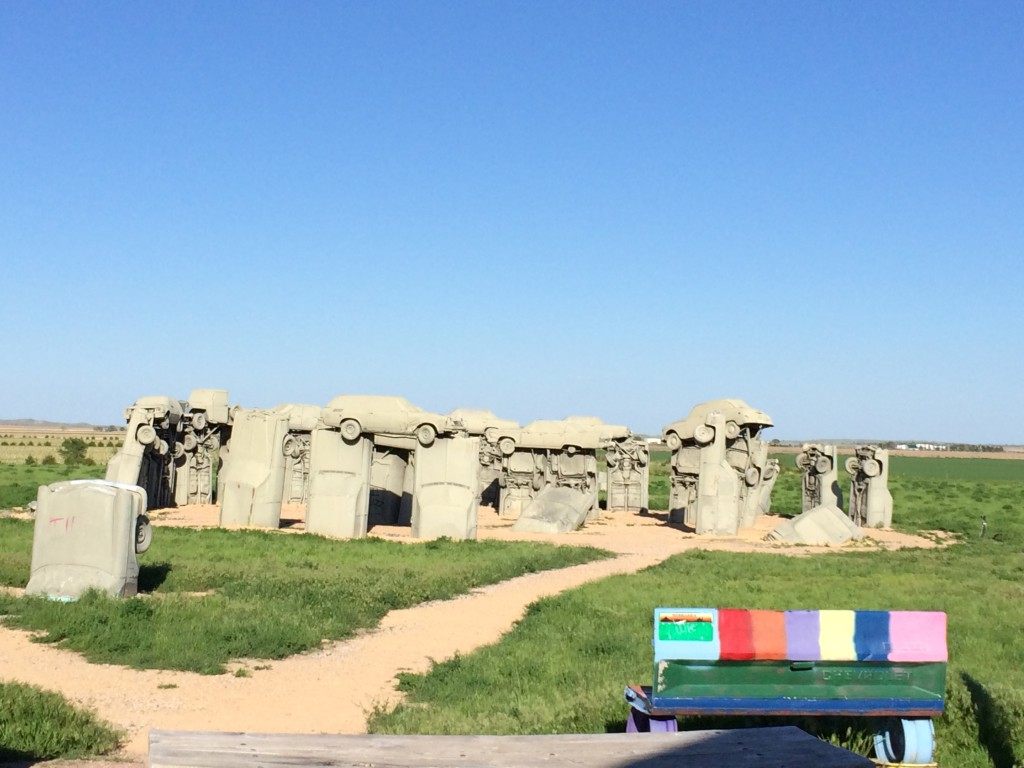 Carhenge as seen from the Gift Shop. The colorful bench is also made from car parts 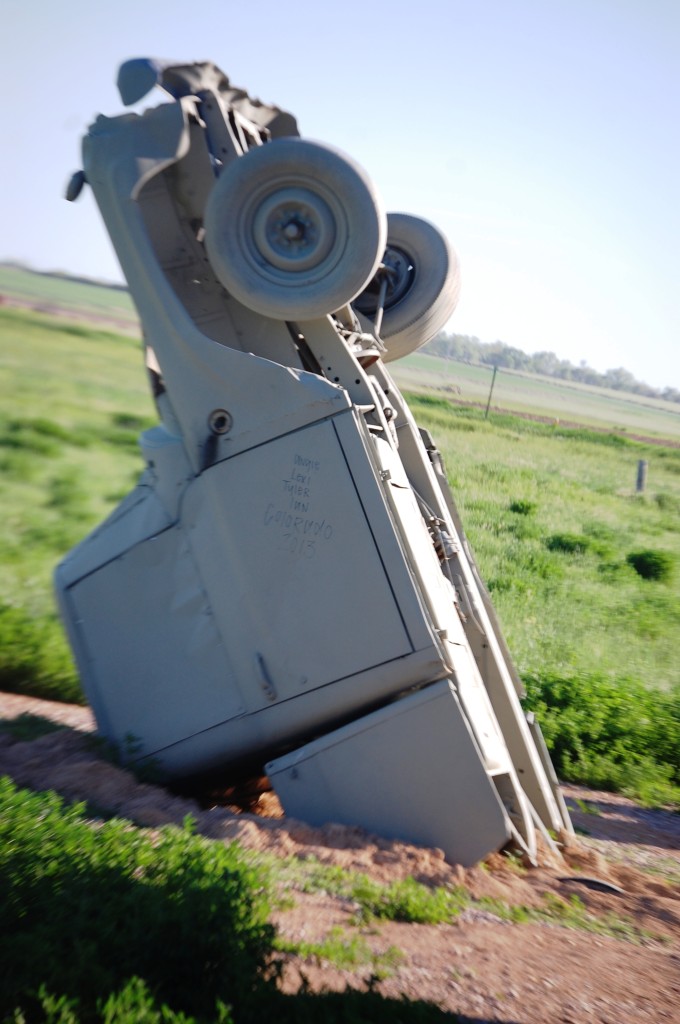 In closing….visit Alliance and Carhenge if you make it to western Nebraska.  Well worth the visit!!

3 thoughts on “Carhenge: One of America’s Premier “Car Art” Sites”