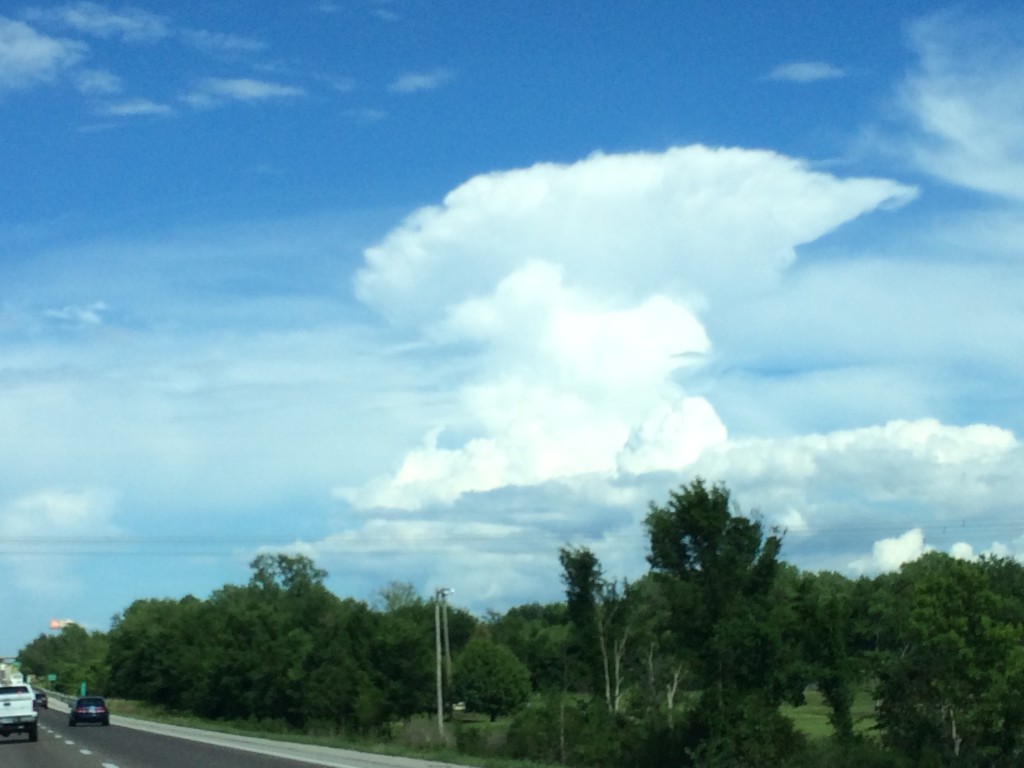 The best and worst part of a long road trip is the coming home part.  Its always nice to be at home in my own bed after a grueling trip across the country.  But, it is bittersweet.  All of the adventures, sights, sounds and exhilaration are behind me.  The last leg of the trip is usually on the Interstates to get home as quickly as possible (with a few brief stops along the way).  This trip was no different.  My trip home was the “long way home” as it covered over 870 miles on the last day as I traveled straight from Grand Island, Nebraska to Lexington (via Kansas City and St. Louis in order to visit a friend in KC).

The Last Leg of a nine day trip – 870 miles from Grand Island, NE to Lexington, KY 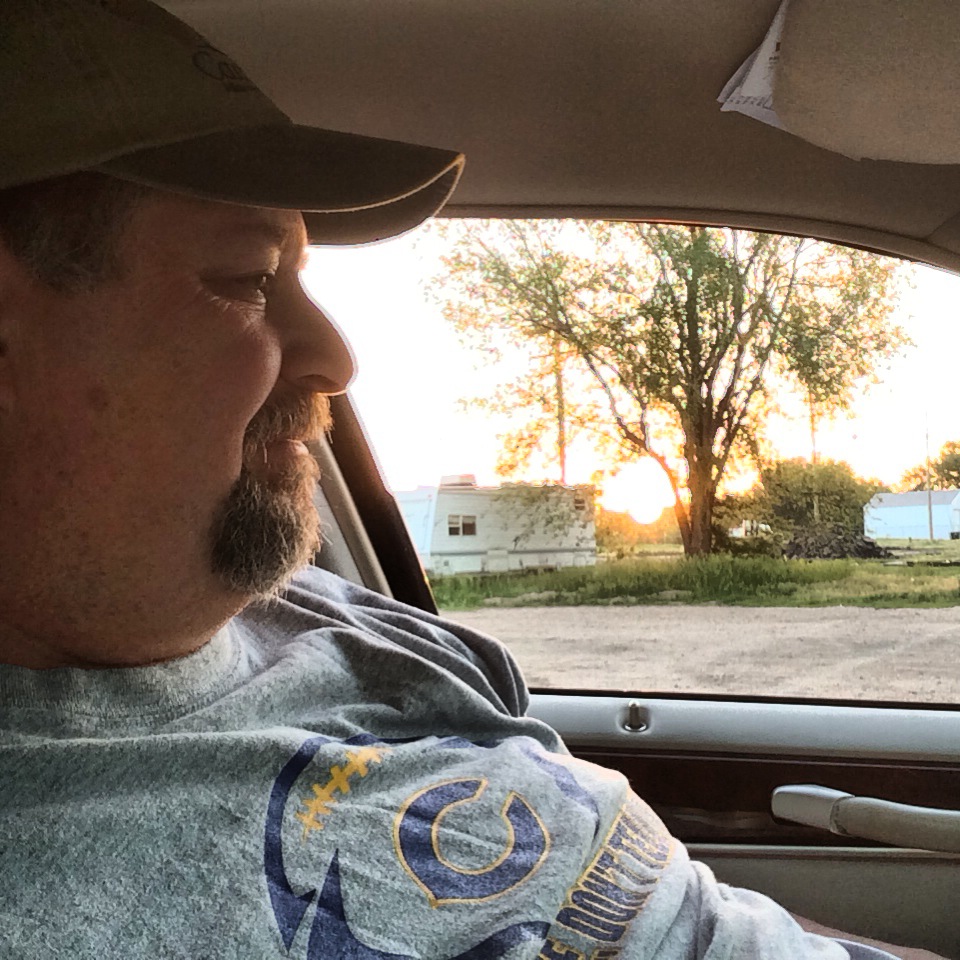 Starting off at sunrise in Grand Island, NE

I started off early on this May 29 (Thursday) morning cruising east on Interstate 80.  It was a beautiful morning drive with a bit of mist in the air providing for some nice scenes from the highway.

Heading east on I-80 from Grand Island 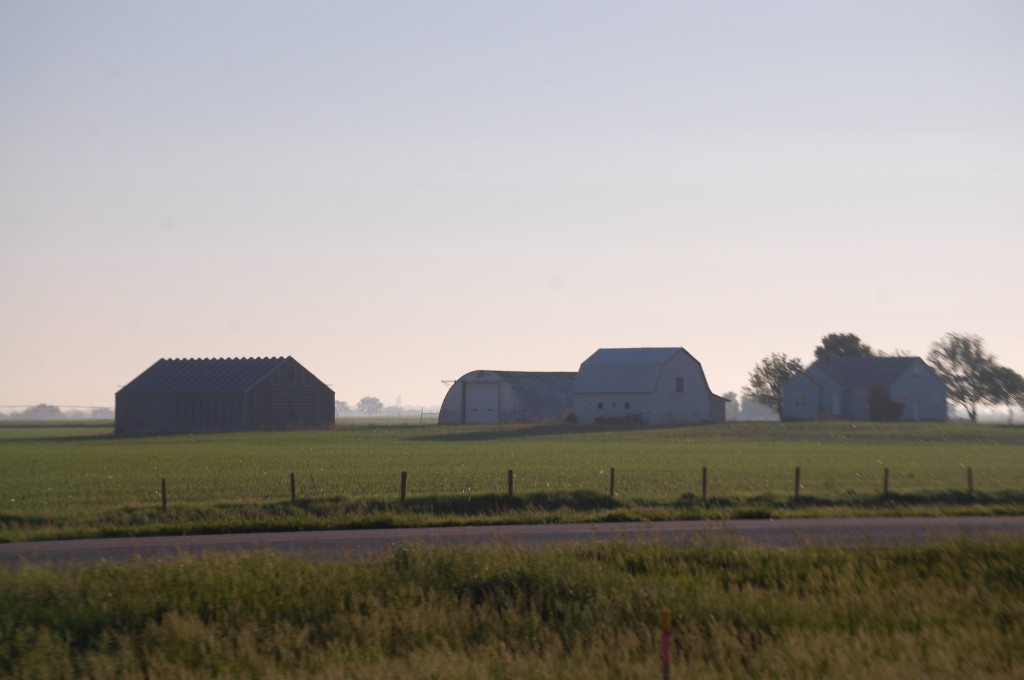 My first stop was in York, Nebraska.  I had to stop for a rest stop and to get a photo of the uniquely colored water tower. 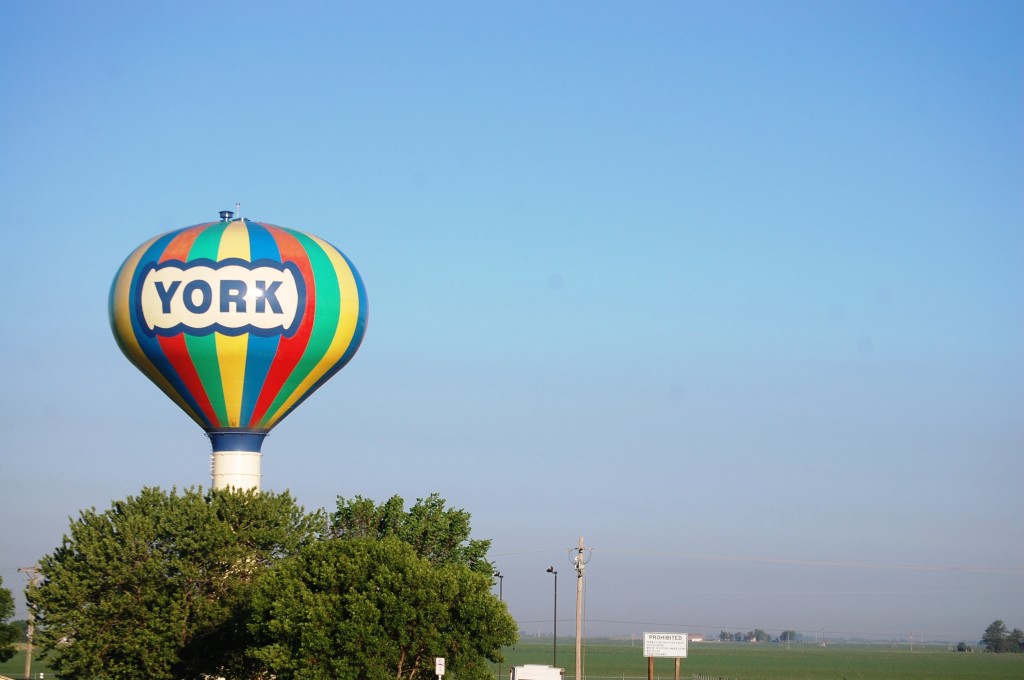 From York the interstate continued east to Lincoln, the capitol city of Nebraska.  It is home to the historic Capitol Building, a towering 400 foot tall building that can be seen for miles. Construction began in 1922 and was completed in 1932.  The building is not the tallest state capitol in the country.  That goes to the Louisiana State Capitol, which is 450 feet tall.  Nonetheless, the “Skyscraper of the Plains” is quite impressive. 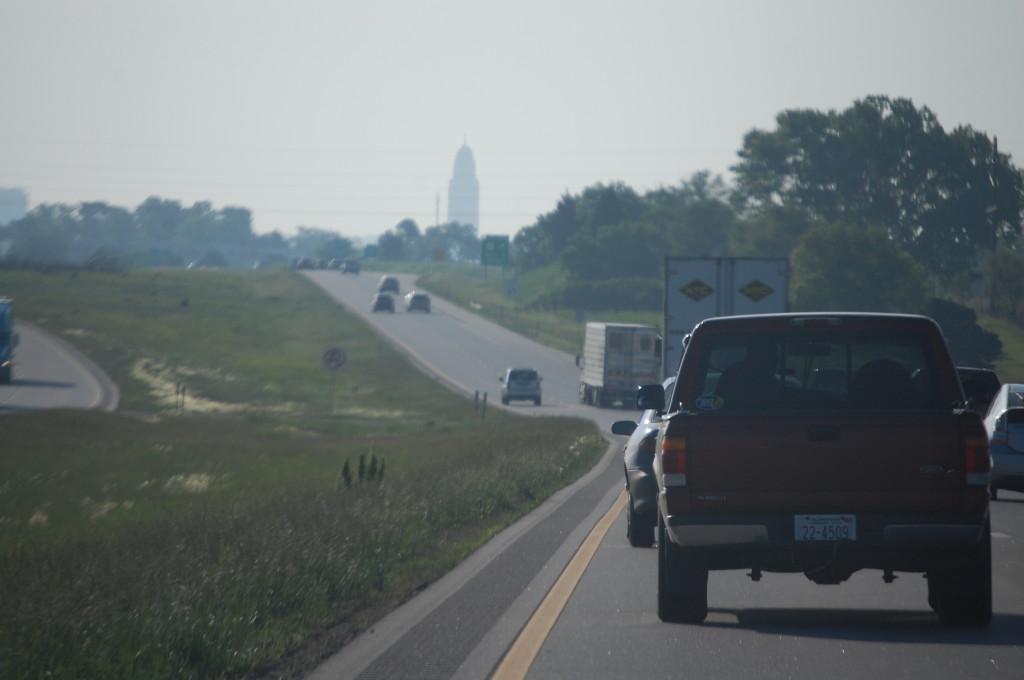 The “Skyscraper of the Plains”, Nebraska’s State Capitol in Lincoln, can be seen for miles 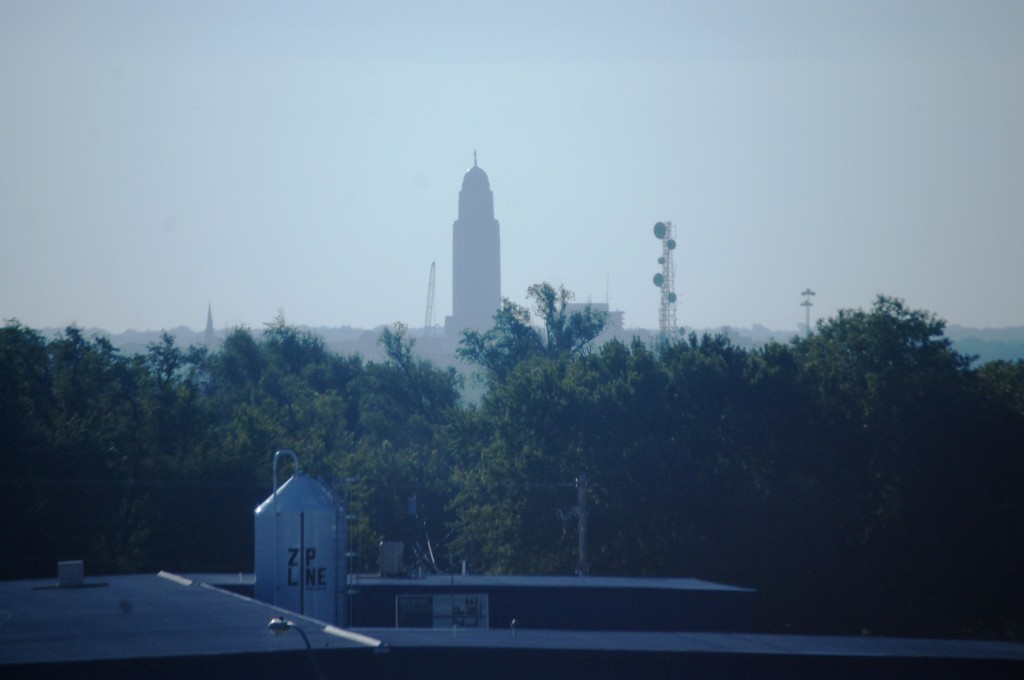 Of course, Nebraska is the “Cornhusker State” and there are plenty of corn fields to be seen from the highway. 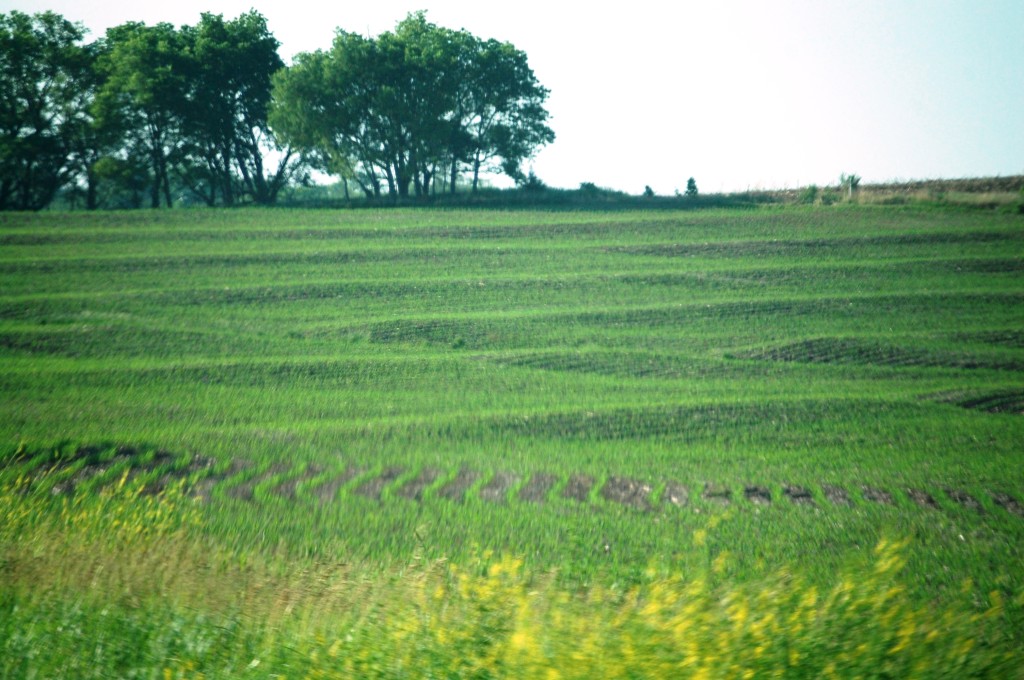 From Lincoln, I continued into Nebraska City, a place I have visited and stayed in (see my blog post about this lovely town). When there, I always have to stop at Sapp Brothers on the southside of town (actually in Percival, IA) off of Interstate 29….they have the cleanest restrooms on I-29! 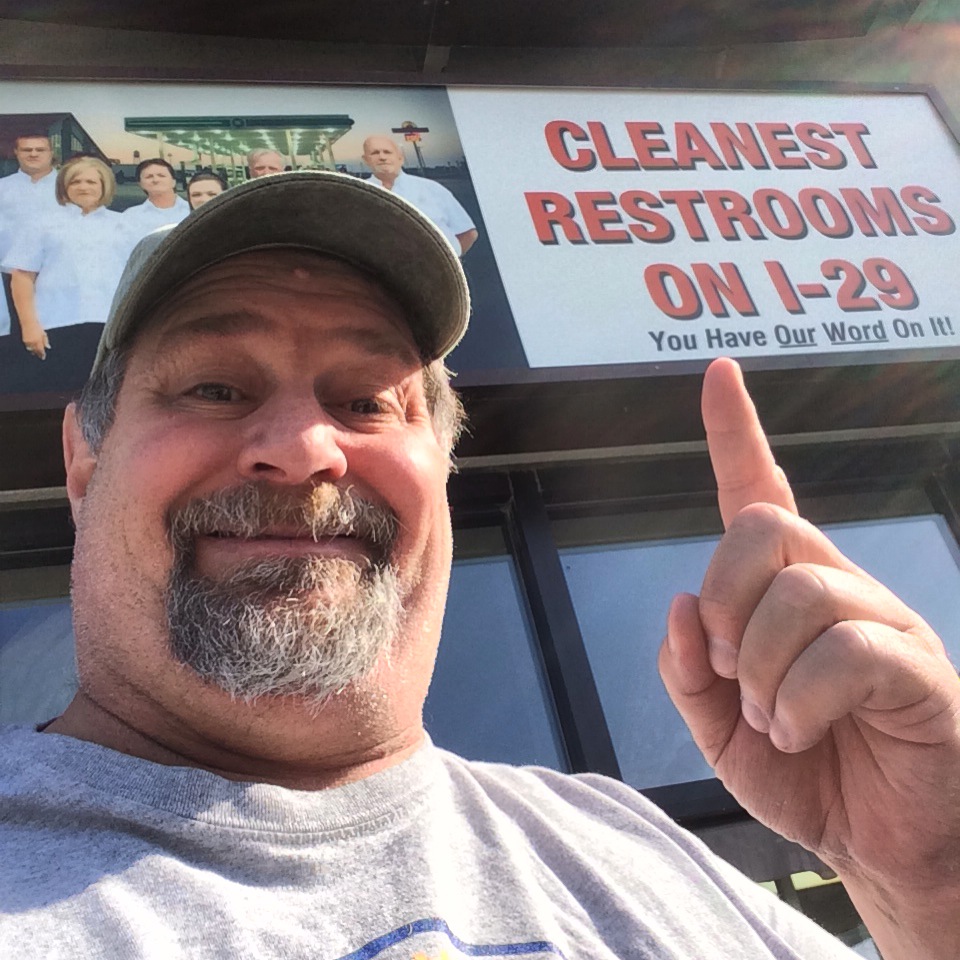 Sapp Brothers in Nebraska City, the “Cleanest Restrooms on I-29” 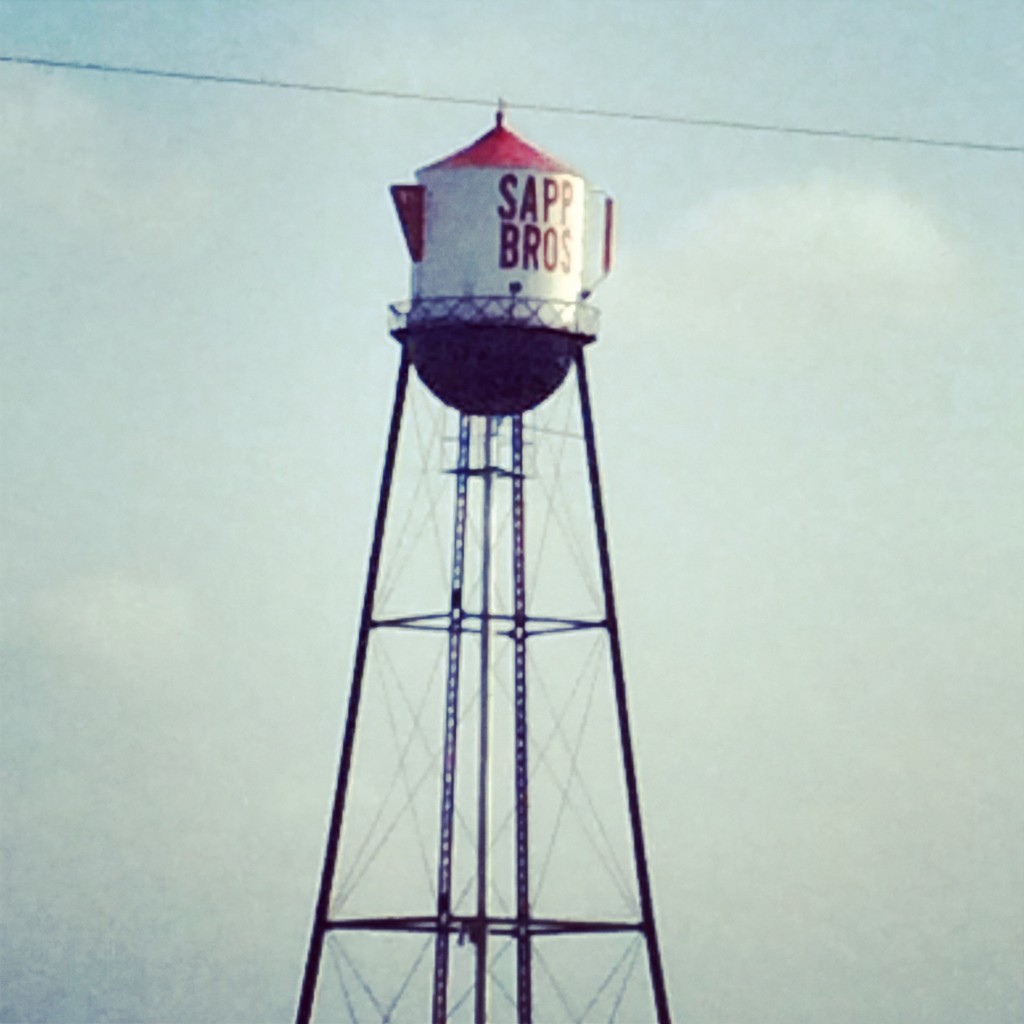 Not too far south of Nebraska City, I-29 crosses into the far southwest corner of Iowa and through the small town of Hamburg, which basically hugs the borders of Missouri to the south and Nebraska to the west. 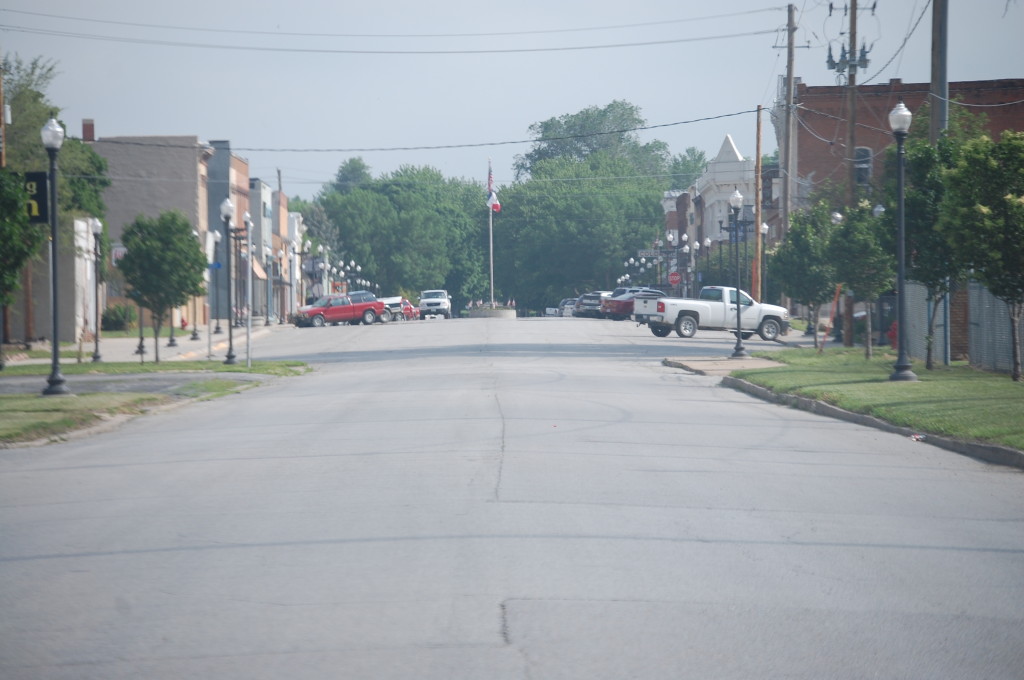 This is a shot of downtown Hamburg, IA 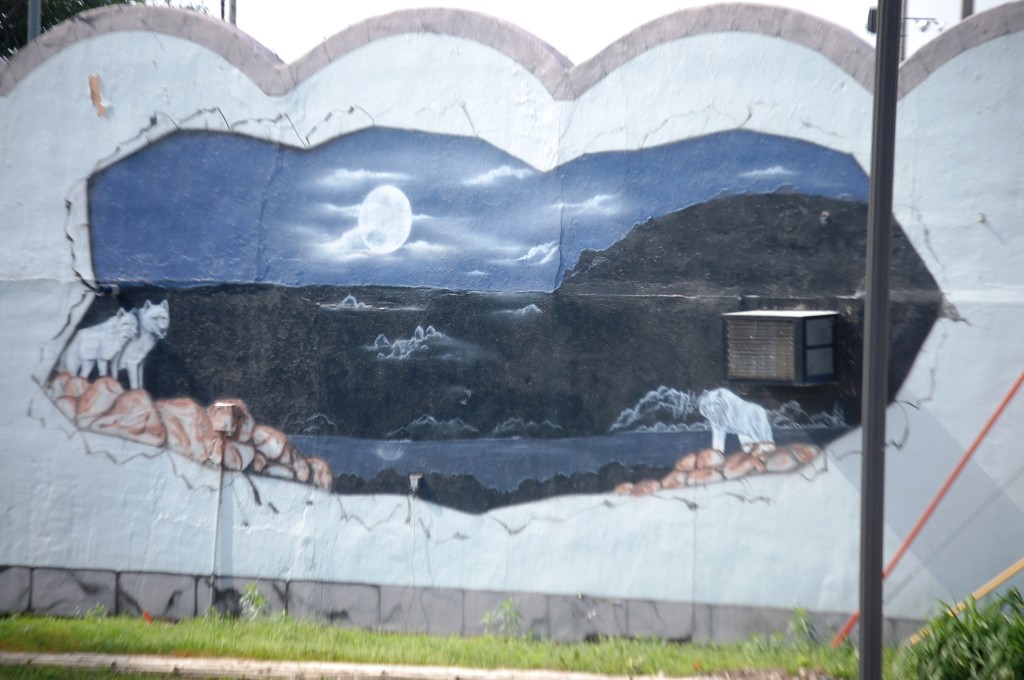 Perhaps the real treat in Hamburg is Stoner Drug…yes, a strange name for a drug store.  But this particular shop also houses an old fashioned Soda Fountain, which is rare to find nowadays.  Even has the little spinning chairs and they make MALTS too. 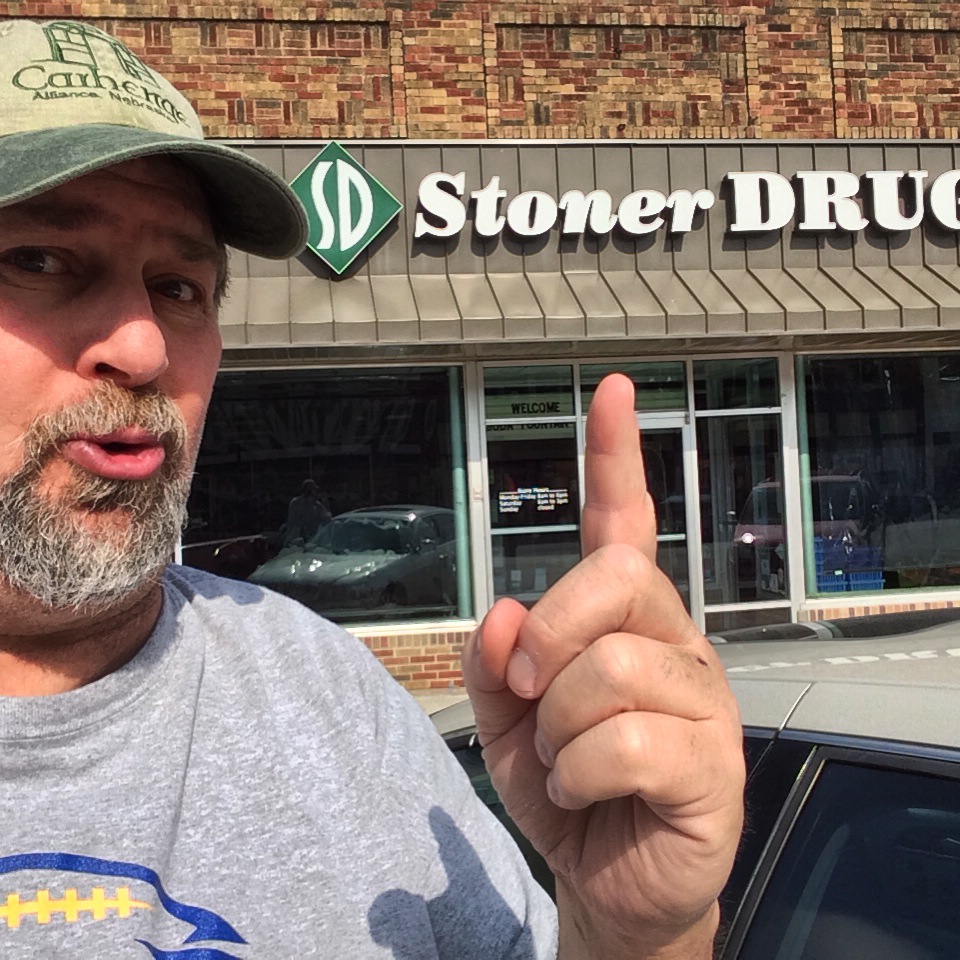 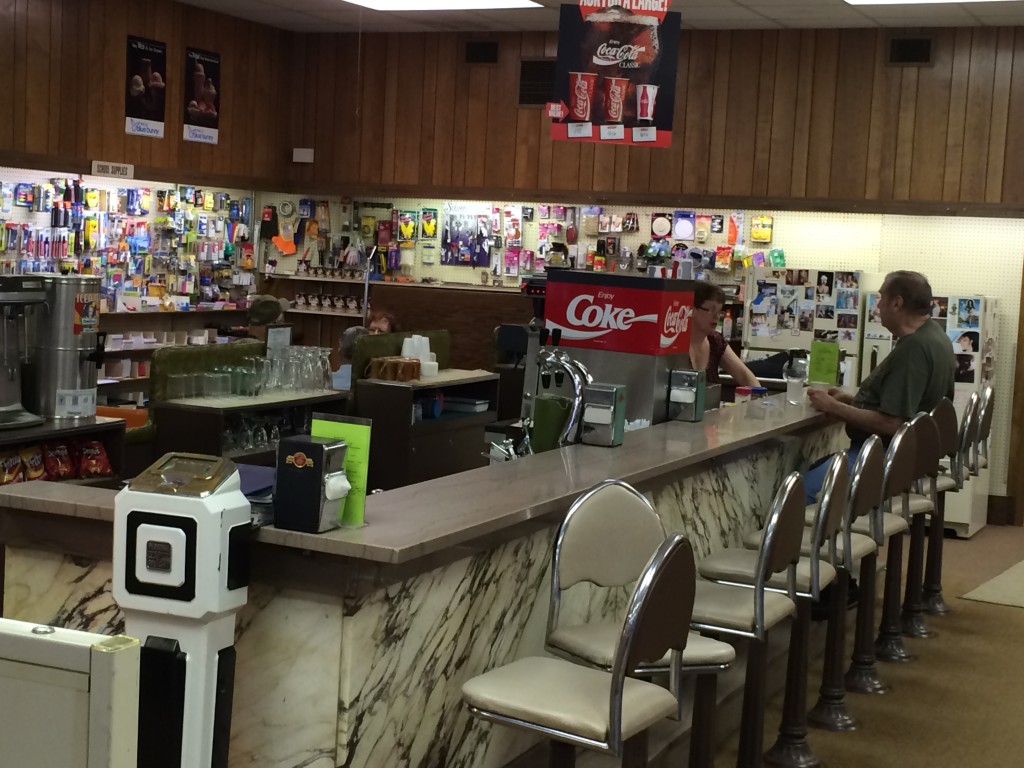 The old fashioned soda fountain inside of Stoner Drug 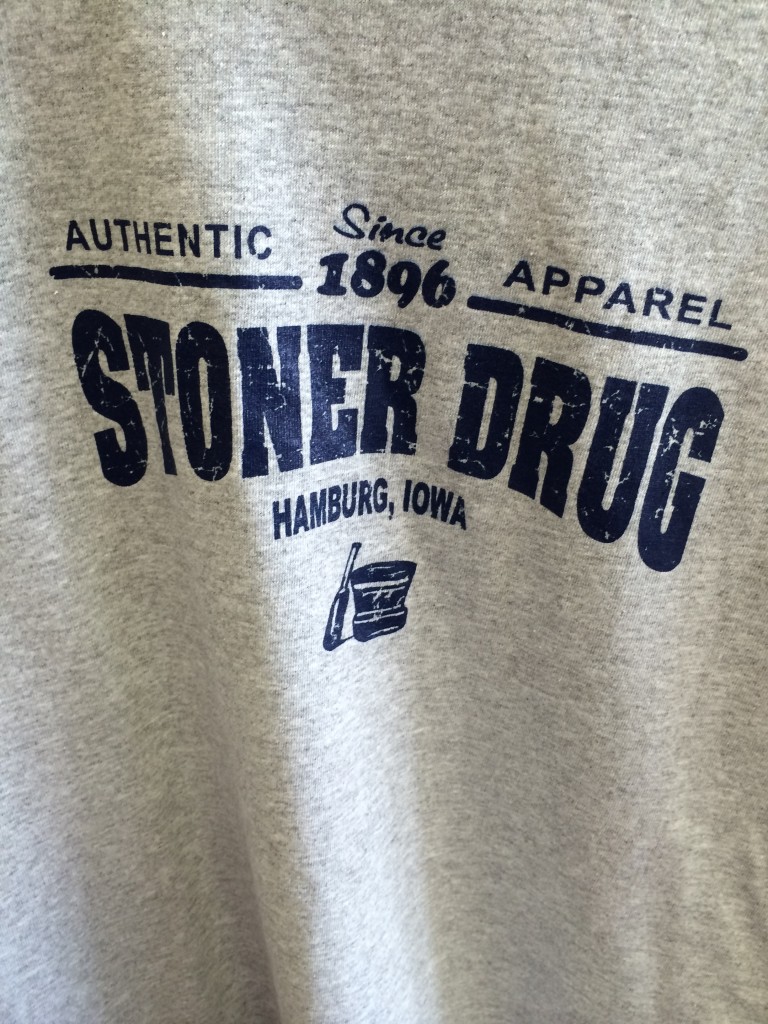 Stoner Drug even sells T-shirts and hats. I almost got one, but I had used my “hat money” on a Carhenge hat the previous day

Heading south from Hamburg you are almost in Missouri immediately. 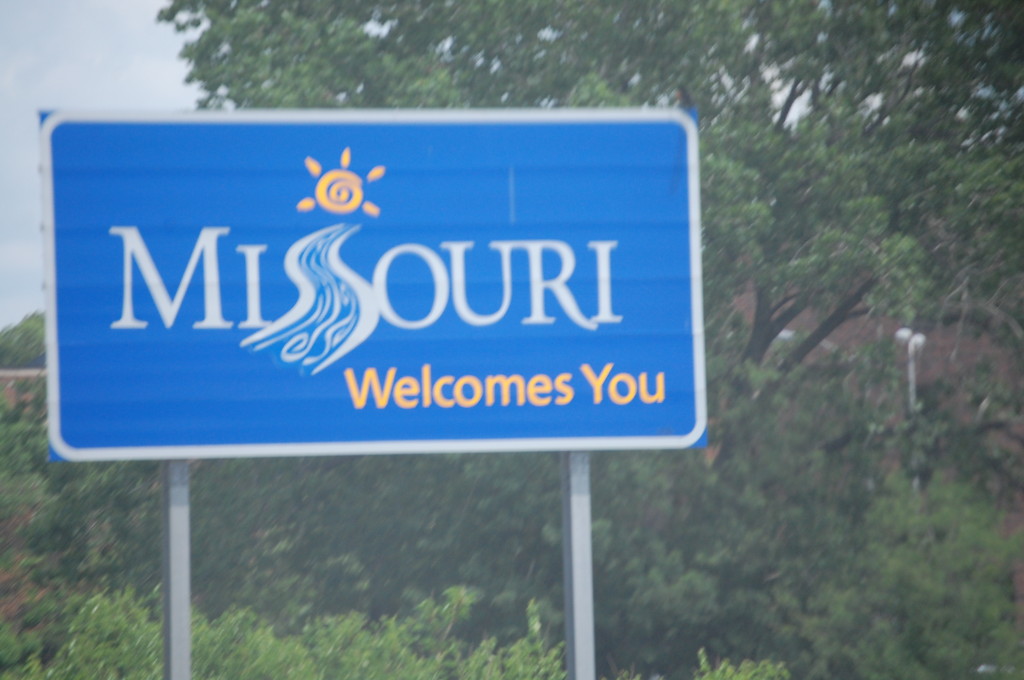 My main purpose for heading south to Kansas City was to visit with my good friend Brad Sweeten, the Athletic Director at Center High School in Kansas City, MO.  I stopped in for a visit and lunch at one of his favorite places (and mine too), Oklahoma Joe’s Bar-B-Que.  My last trip we visited their store in a gas station.  This time it was at their new place…still plenty of lines. 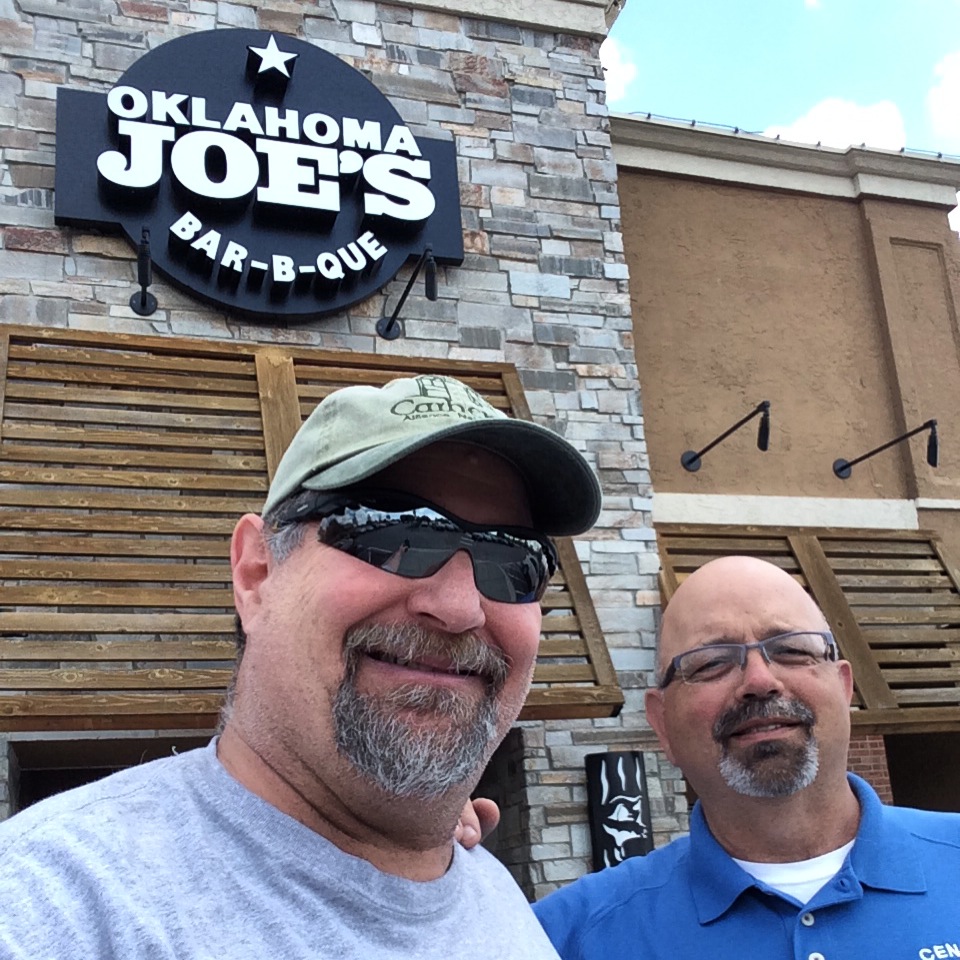 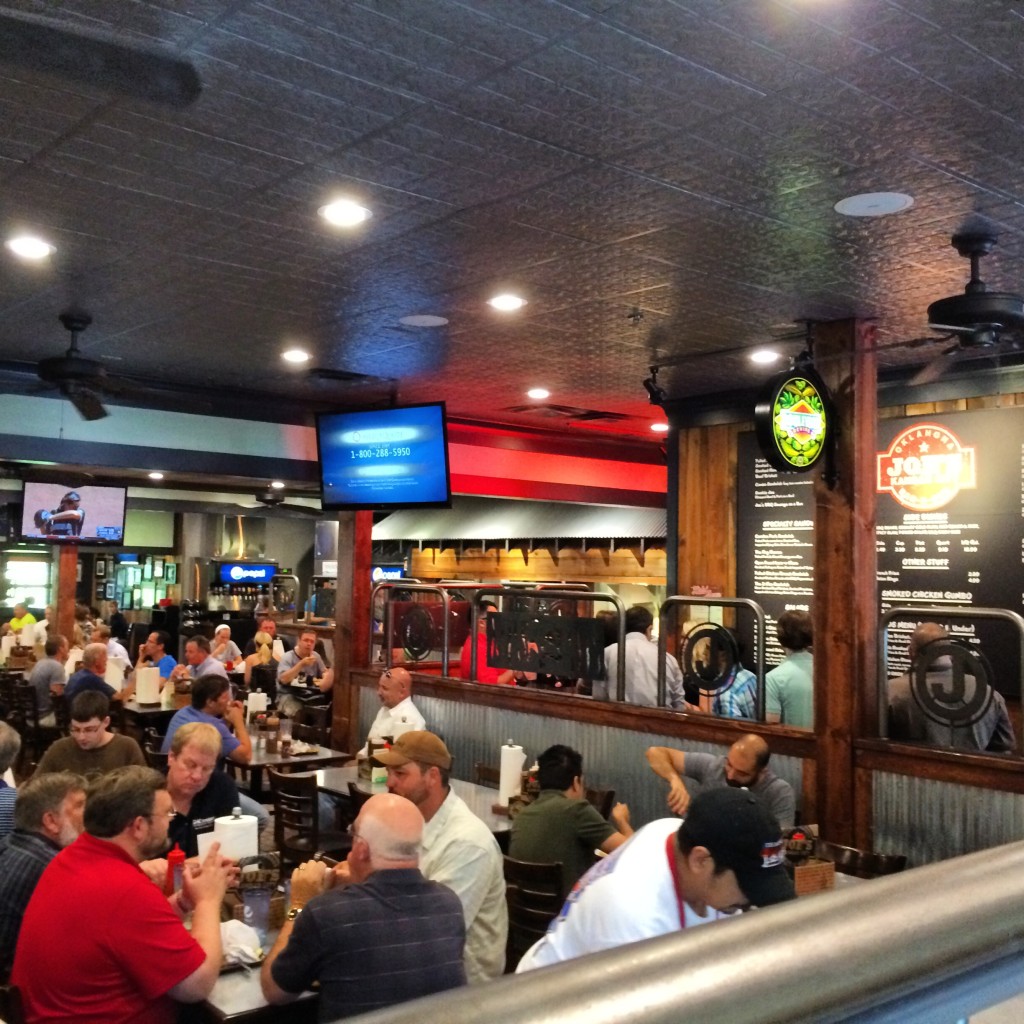 After my brief stopover in Kansas City is was time to fly on home down the Interstate.  As I drove through Missouri, the clouds were amazing…giant cumulonimbus clouds were framed by the blue background of the sky. 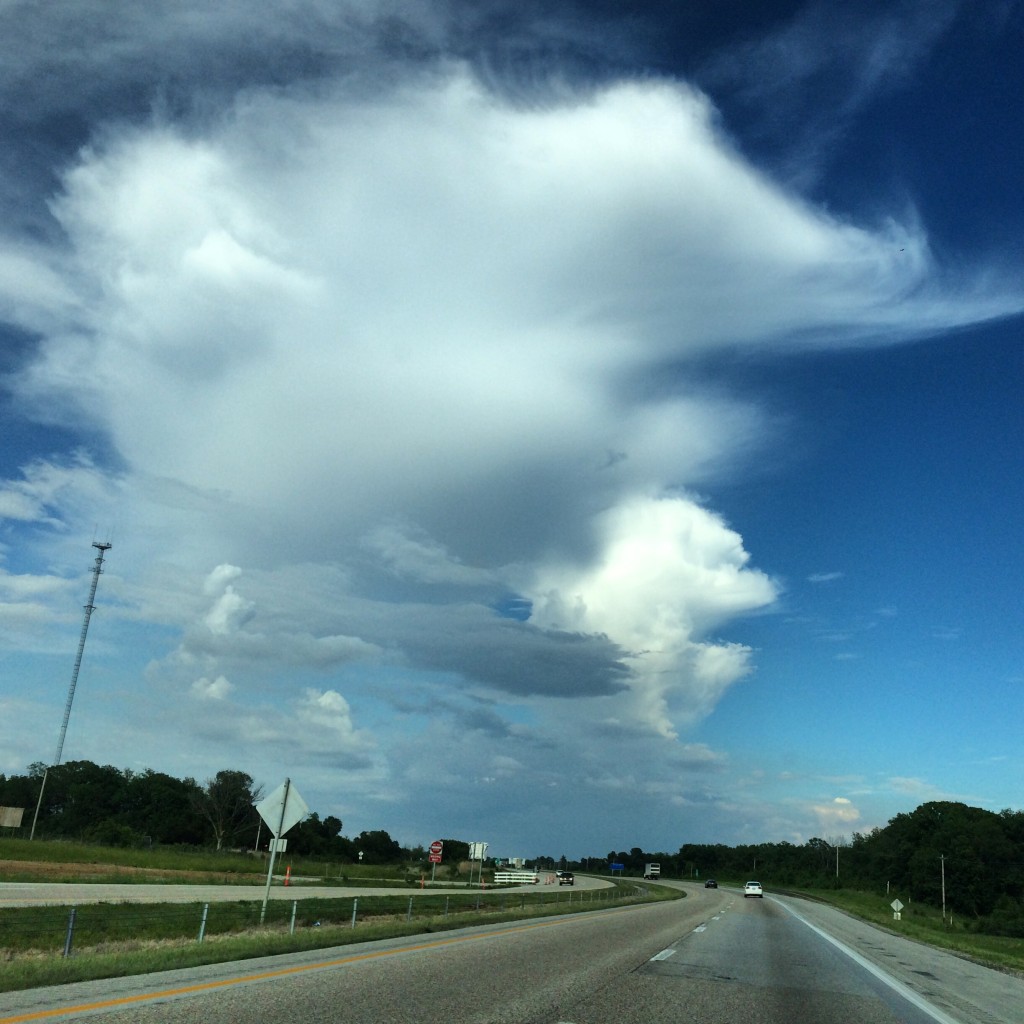 After a hearty meal, a short night of sleep and a lot of driving already, it was time for a nap….even Road Warriors need to sleep!! 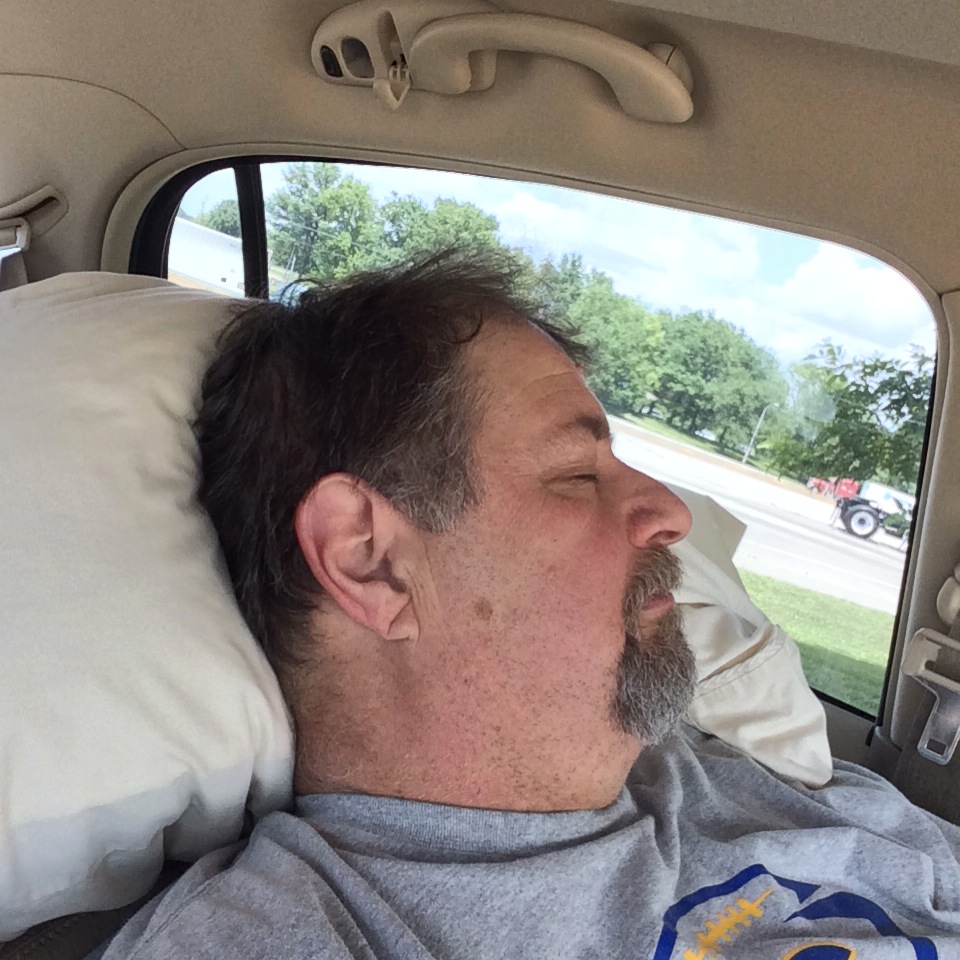 After my brief 30 minute power snooze, I was back on the road with only one other planned stop to see a Paul Bunyan looking Muffler Man in Wentzville, MO. 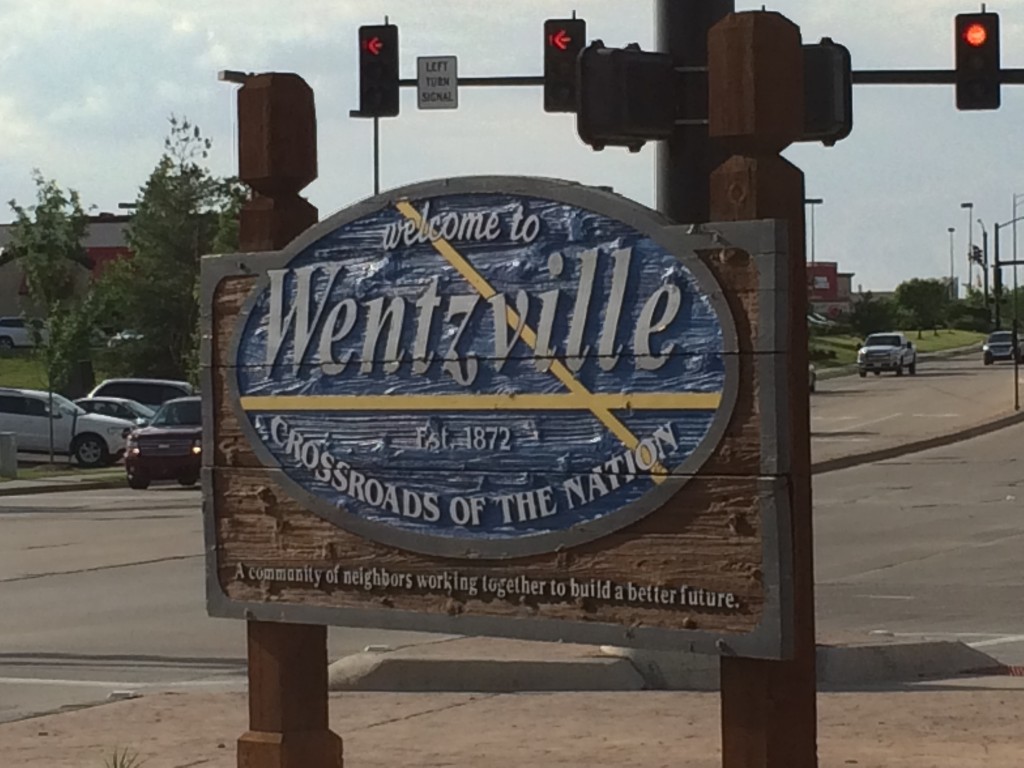 I went to Wentzville, the Crossroads of the Nation 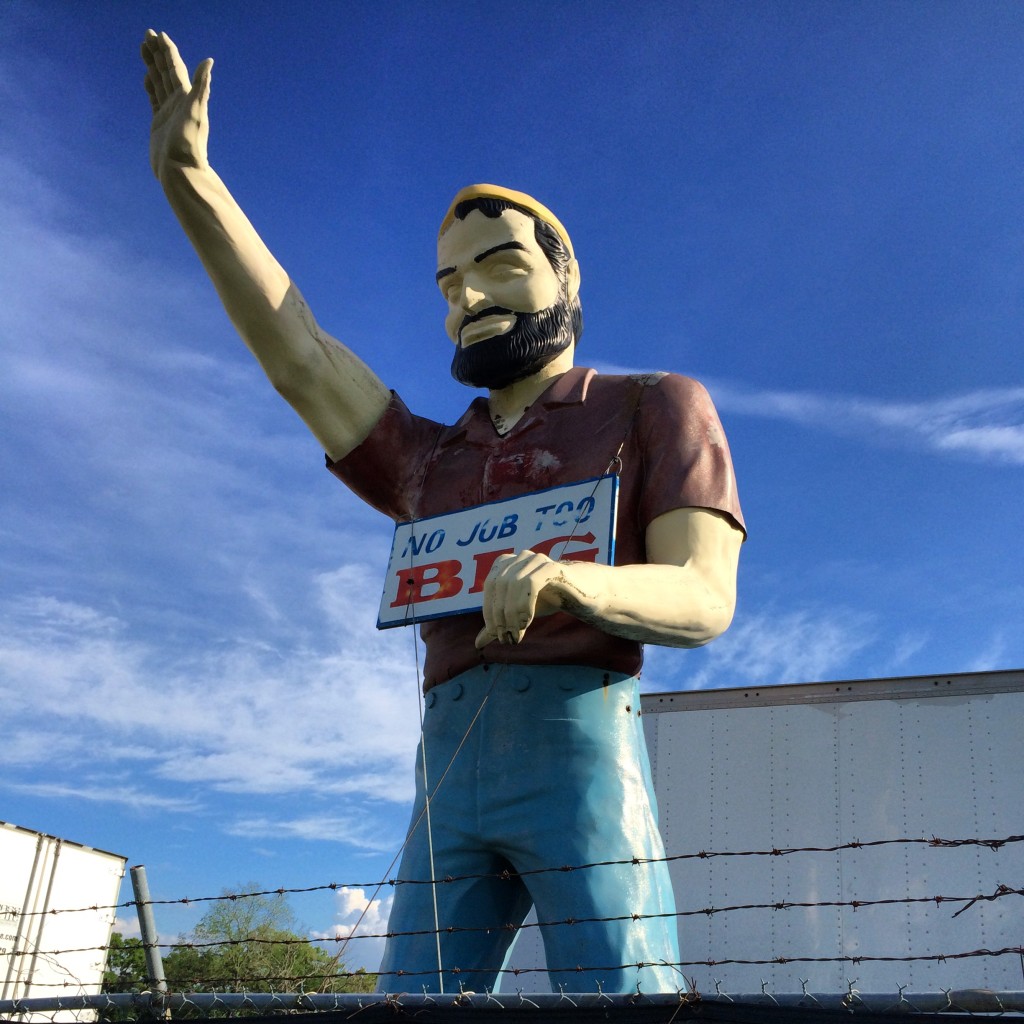 Paul Bunyan Muffler Man just off of the interstate in Wentzville, MO

If you are really interested in Muffler Men and Uniroyal Gals and their variations, you MUST see Roadside America’s Muffler Man Page.  It is chock full of info, history and even a location map of these big guys and gals. 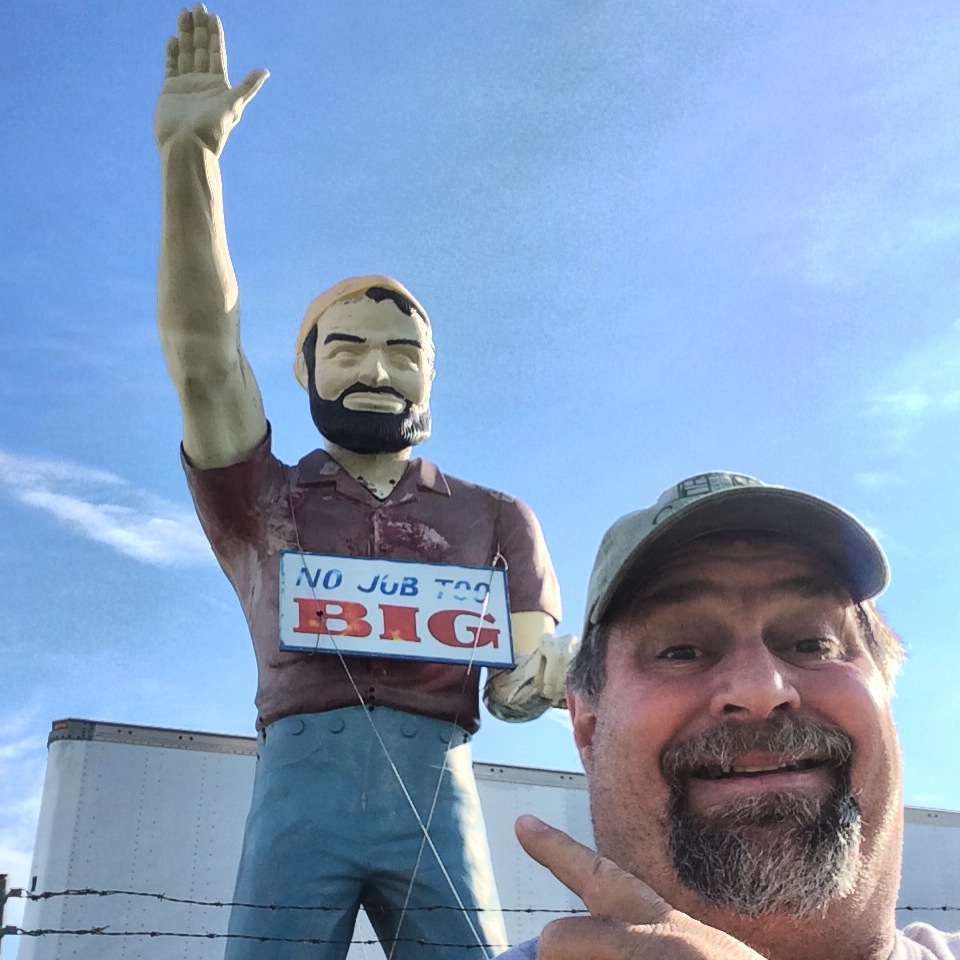 I have seen many of these guys in my travels and you’ll run across them in my blogs.  (HERE are some in Texas; a Uniroyal gal in Idaho; a Native American Muffler Man in Bemidji, MN; a Big John in Metropolis, IL; another Big John in Great Falls, MT and there are more.) 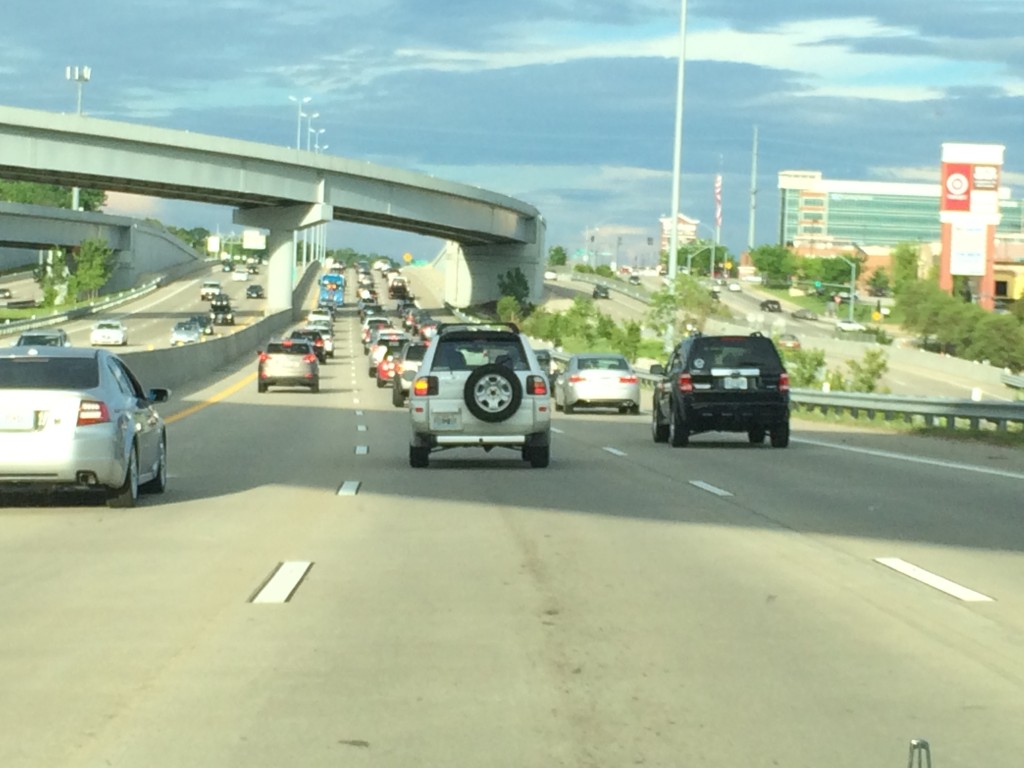 On the way into St. Louis I got slowed down considerably by heavy late afternoon traffic.  I was really glad when I finally go to Cardinals Stadium, which meant I was soon across the river… 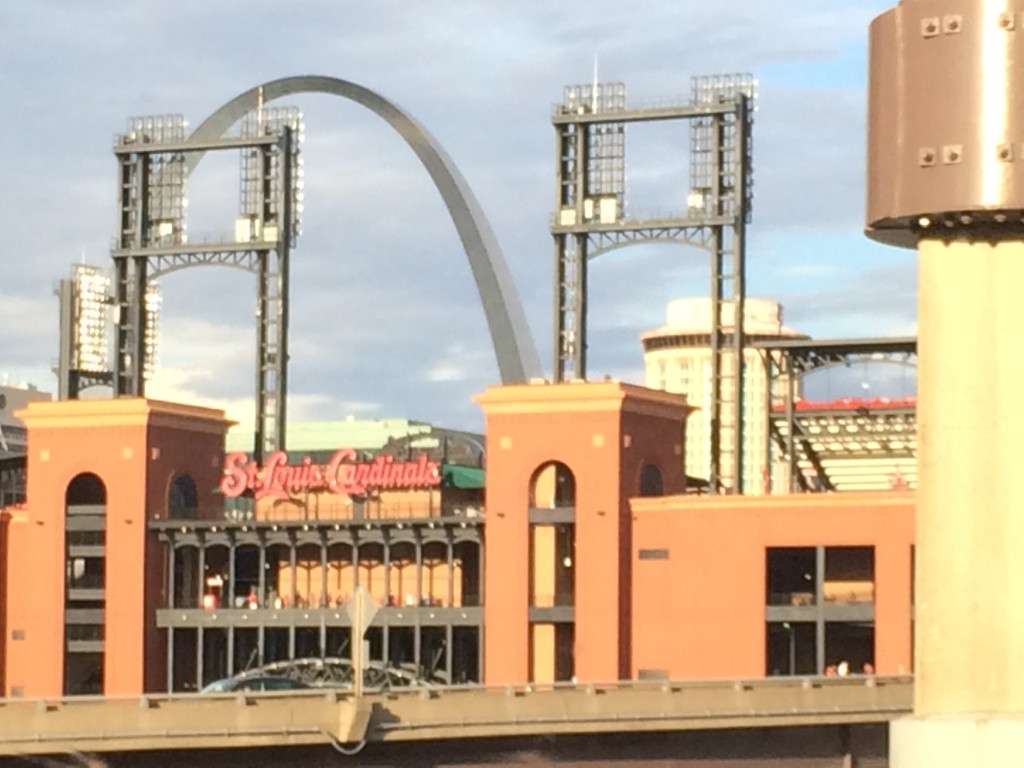 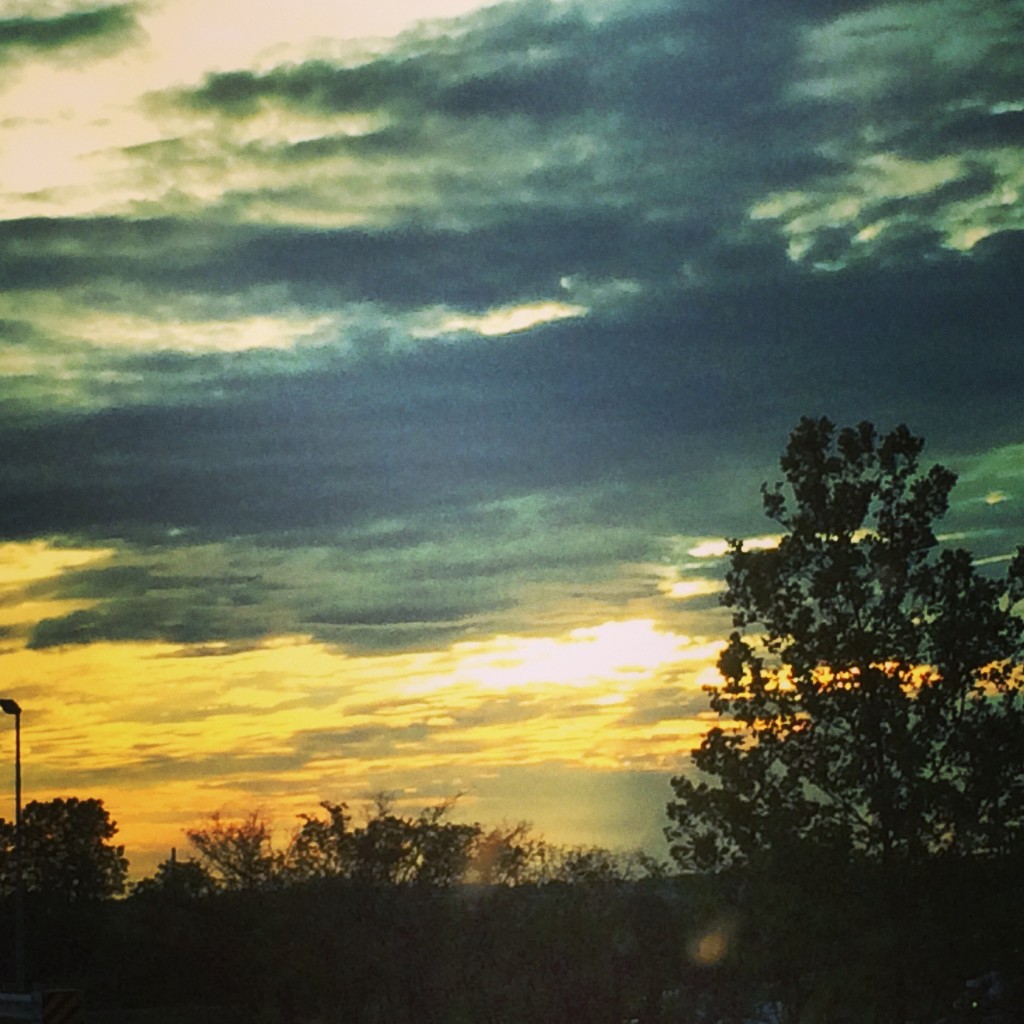 Sunset as seen from southern Illinois 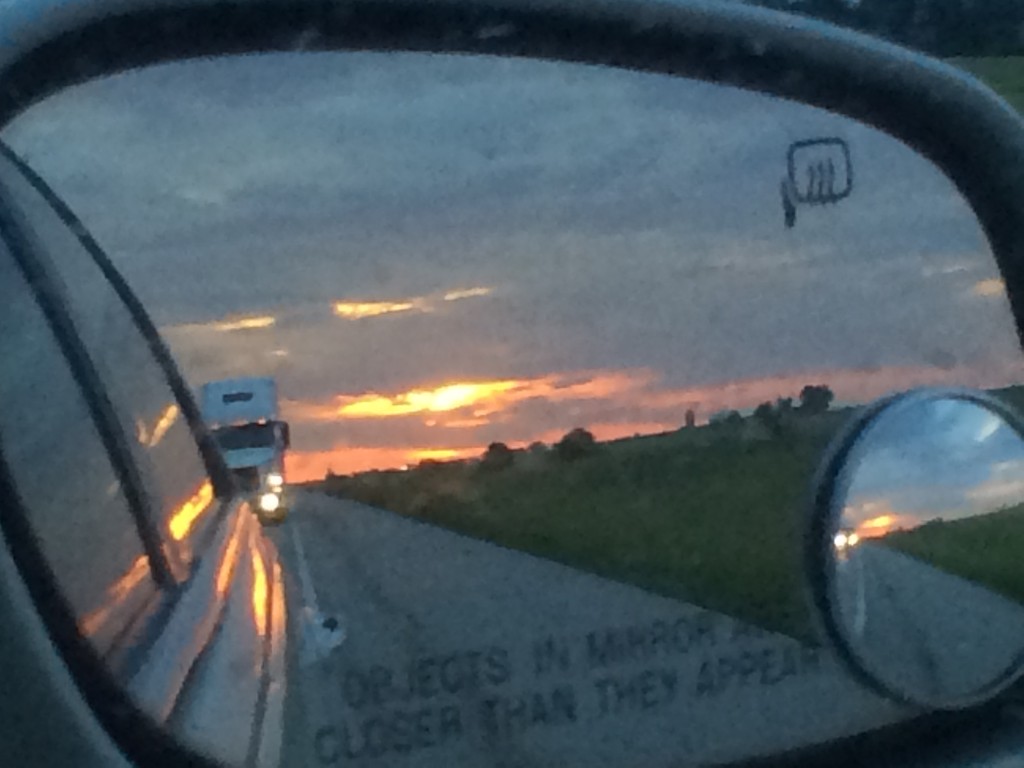 Finally, the last leg of a trip covering 9 days, 12 states, 4500+ miles and numerous amazing adventures was over with at about 1 AM EST.  Time for a rest….