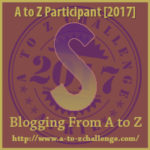 There are some super huge statues in this country. Giant behemoths that can be seen from far away.

Perhaps there is no place better for BIG than in Texas, where everything is supposedly bigger.  Texas actually has three of the tallest statues in the United States, including two that honor the great Texas heroes Sam Houston and Stephen Austin.  All three giant free standing statues exceed 70 feet in height (including the pedestal/base). This puts these giants in the top seven tallest monuments in the United States. 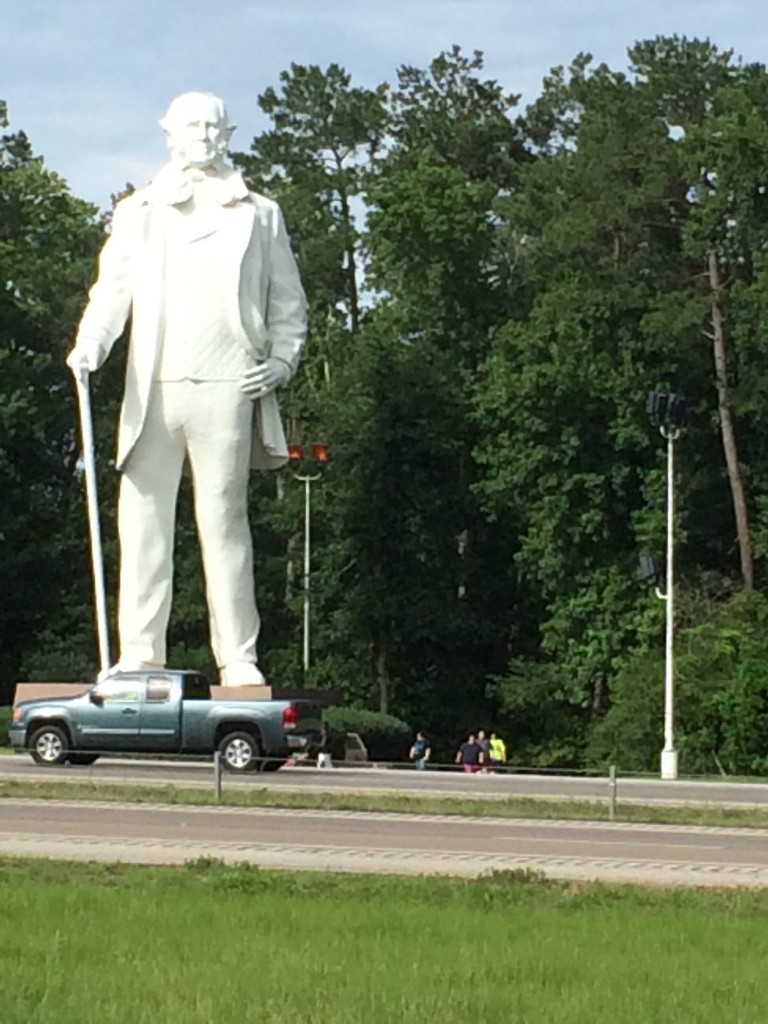 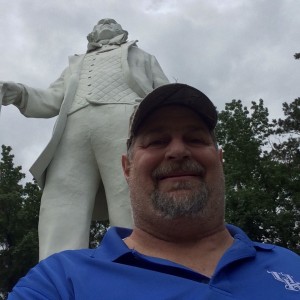 Sumoflam with Big Sam Houston towering behind him in Huntsville, TX

The tallest of the three is the “Tribute to Courage” statue of Sam Houston, located in Huntsville, Texas home of Sam Houston State University.  This one stands 67 feet but also has a 10 foot pedestal, giving it a ground to top height of 77 feet. It was built in 1994.

This giant Sam Houston statue can be seen from far off when driving on Interstate 45, especially coming from the south.  It stands on the right looking over the interstate proudly.

This statue, along with the one of Stephen Austin were both done by Houston Artist David Adickes from his Sculpturworx Studio. 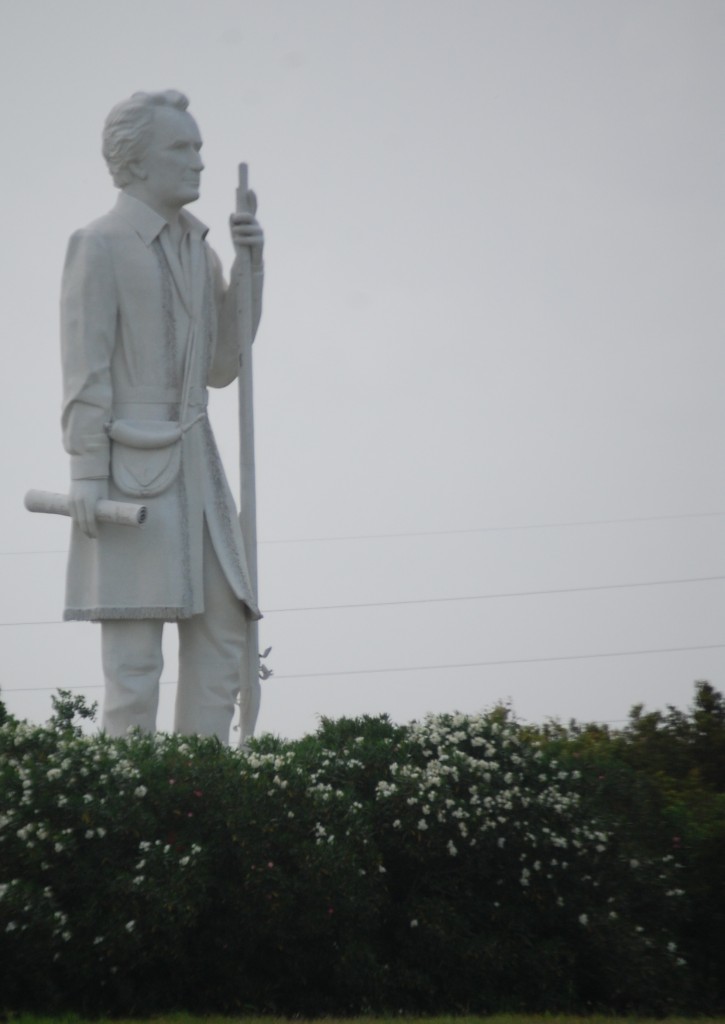 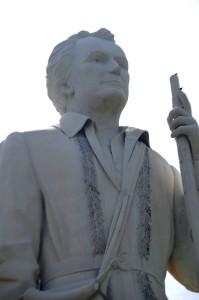 Soon after artist David Adickes unveiled his Sam Houston statue, a group of Brazoria County businessmen decided that it was time to honor Texas founder Stephen F. Austin, too.   Adickes agreed to do the statue, which was named “The Father of Texas,” at the same time he was working on his series of gigantic presidential busts for his Presidents Park in Lead, SD.  By 2003, Adickes was ready to start assembling the concrete and steel statue. He assembled the 15 sections  of the statue on a 12-foot, five-sided granite base, that took almost a year to piece together. 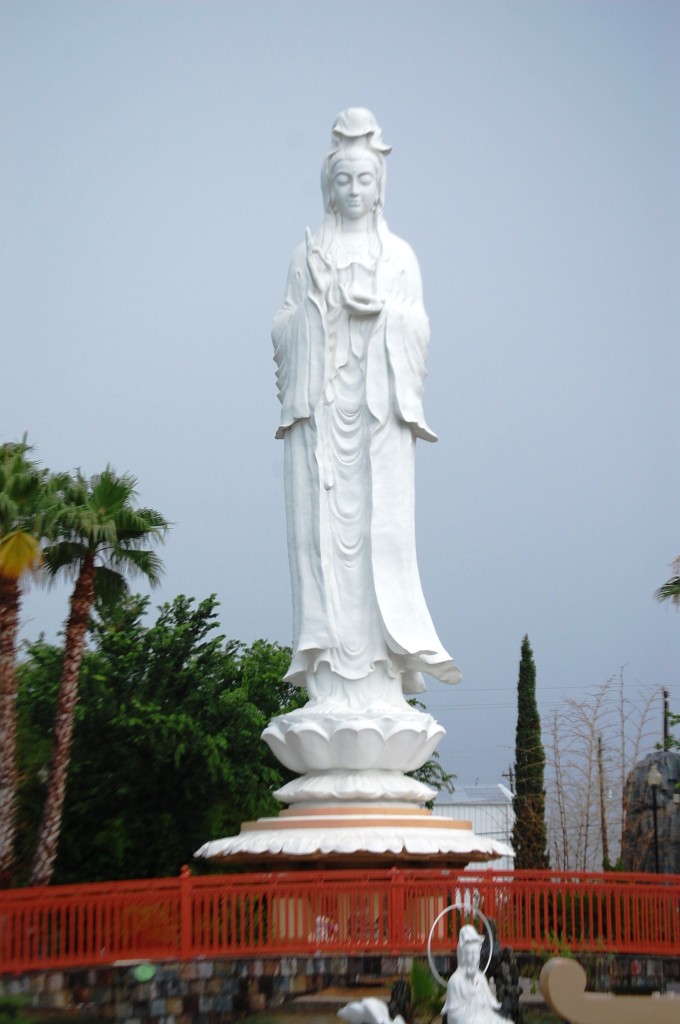 The 72 foot tall Quan The Am Bo Tat statue in Sugar Land, Texas

The third giant doesn’t quite fit the nature of these two Texas heroes. Instead, the Quan The Am Bo Tat (Also known as Quan Am – Mother of Buddha) statue in Sugar Land stands 72 feet tall as it towers over the Vietnamese Buddhist Center. 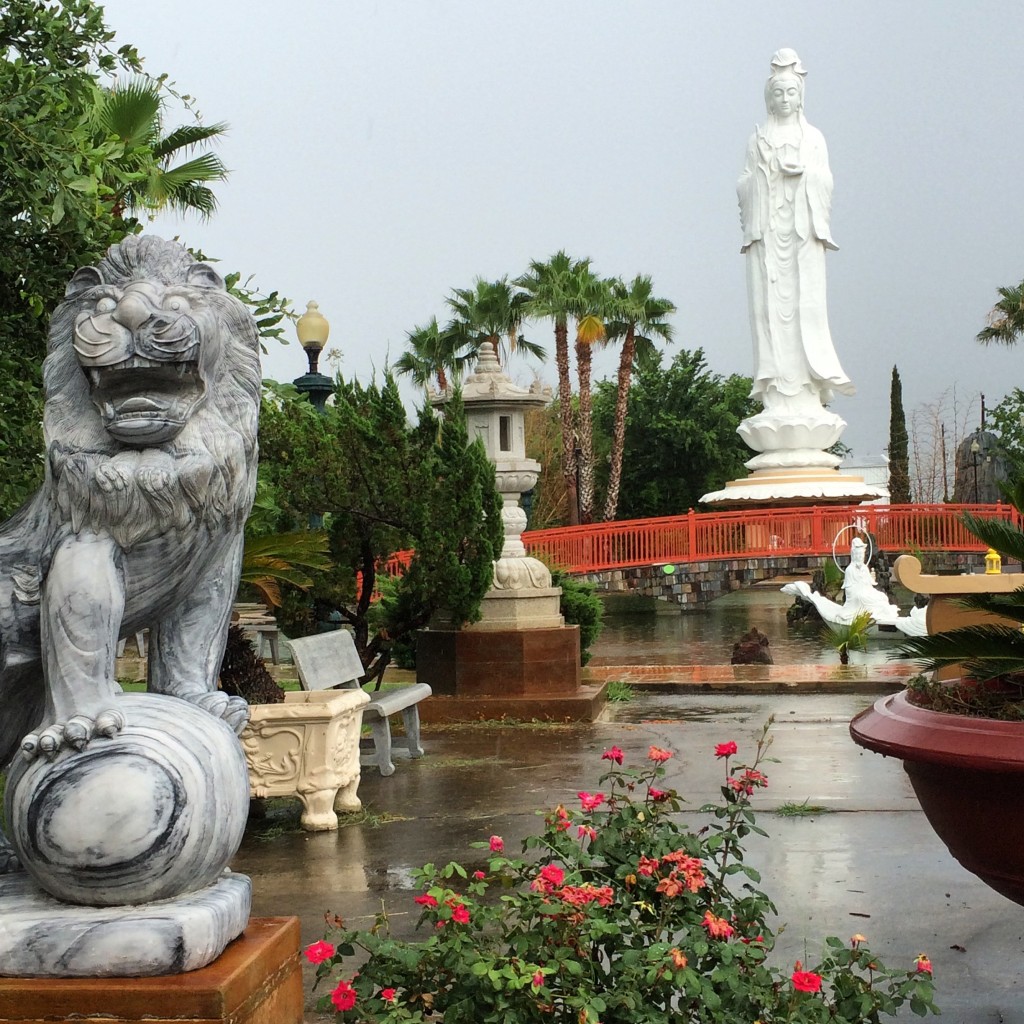 The idea for this statue was conceived in 1994 as the Vietnamese Buddhist Center in Sugar Land, sought for an artist to do one. By the end of June 2001, this 72 foot tall statue was dedicated. 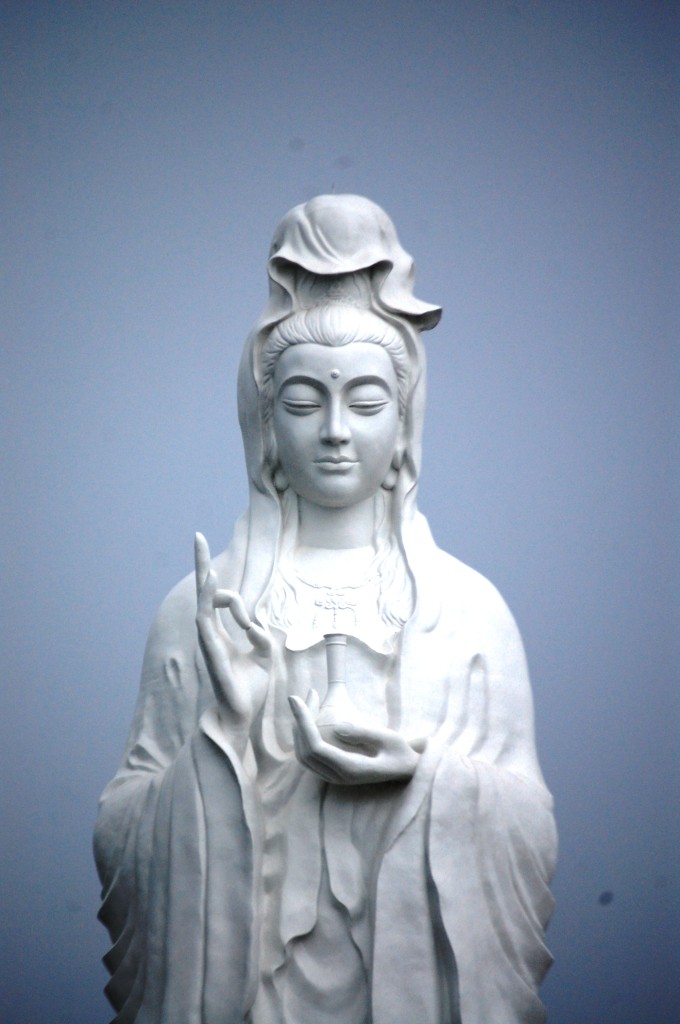 Closeup shot of Quan Am statue in Sugar Land, TX

The statue was designed an build by New Orleans artist Mai Chi. She escaped from Vietnam in 1989 and spent four years in a refugee camp in Indonesia. She has a literature degree from the University of Saigo and took up sculpting clay religious figures for Buddhist, Catholic and Muslim refugees while there. She also took up wood carving. After being asked to build this, Chi took a year to design the statue. According to Chi, the face came from dreams she had during the design period.

The statue is garbed in a long stately robe. Her right hand forms the circular Buddhist finger symbol meaning happiness and compassion. In her left hand, she holds a container of dew that brings peace and harmony. She stands atop a lotus flower, a universal symbol of Buddhism.

Without a doubt, perhaps the most interesting part of this work was that Mai Chi turned to her artistic mentor, David Adickes, the sculptor of the other two giants, for advice on the designing the interior. She completed the statue in seven sections and erected it in January 2001. 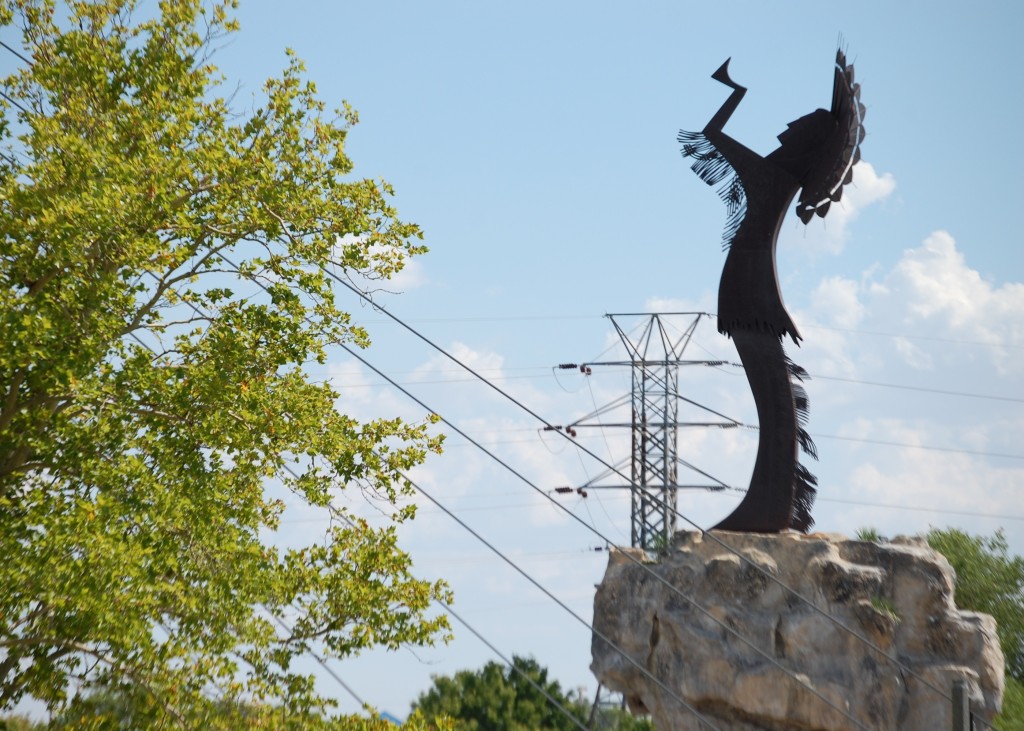 Keeper of the Plains in WIchita, KS

Over the years, I have traveled and seen many other giants. Following are some of the others I have visited over the years.

The Statue of Liberty in New York is the tallest of all statues in the United States. It is 151 feet tall and stands upon a 154 foot pedestal giving it a total height of 305 feet. This was completed in 1886 and was designed and sculpted by Frédéric Bartholdi. I have visited the Statue on four occasions. The photo above was taken in December 1991. 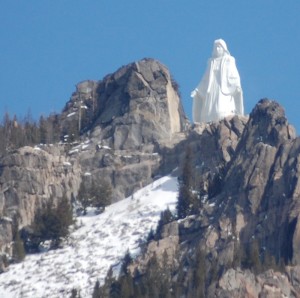 Our Lady of the Rockies, Butte, MT

The second tallest statue in the United States (according to the Wikipedia list) was completed in 1985 high on a mountain in Butte, Montana. Designed by Laurien Eugene Riehl, this statue stands 88.6 feet tall and can be seen from Interstate 15 in Butte. I took the photo above in March 2013 from way below using a zoom lens to capture it. 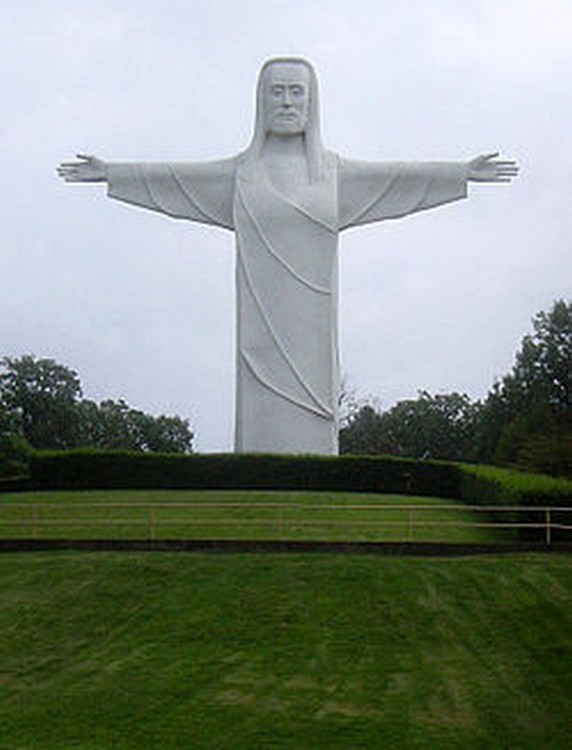 Jesus of the Ozarks in Eureka Springs, AR

Standing 65.5 feet tall, the Jesus of the Ozarks statue was completed in 1966 and overlooks a nice park in the touristy town of Eureka Springs, Arkansas.  I got to visit this statue in 2012. 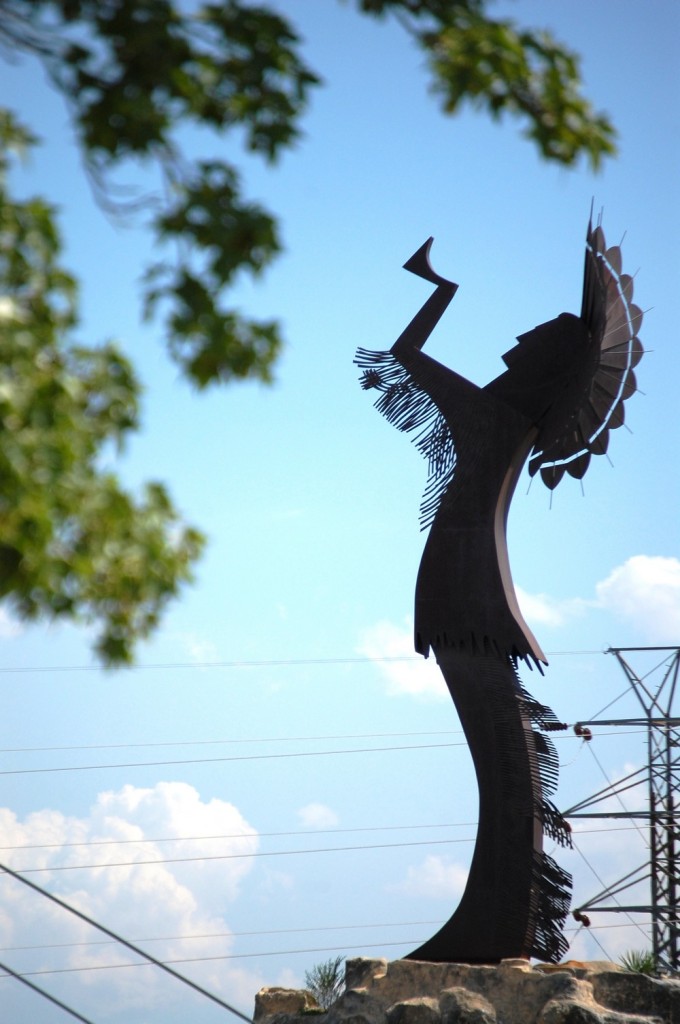 Keeper of the Plains, Wichita, KS

The “Keeper of the Plains” statue in Wichita, Kansas only stands 44 feet tall, but it also sits atop a 30 foot pedestal making the total height of 74 feet. This was designed and created by Kiowa-Comanche artist Blackbear Bosin in 1974. It stands at the confluence of the Arkansas and Little Arkansas Rivers. I visited this in 2012. 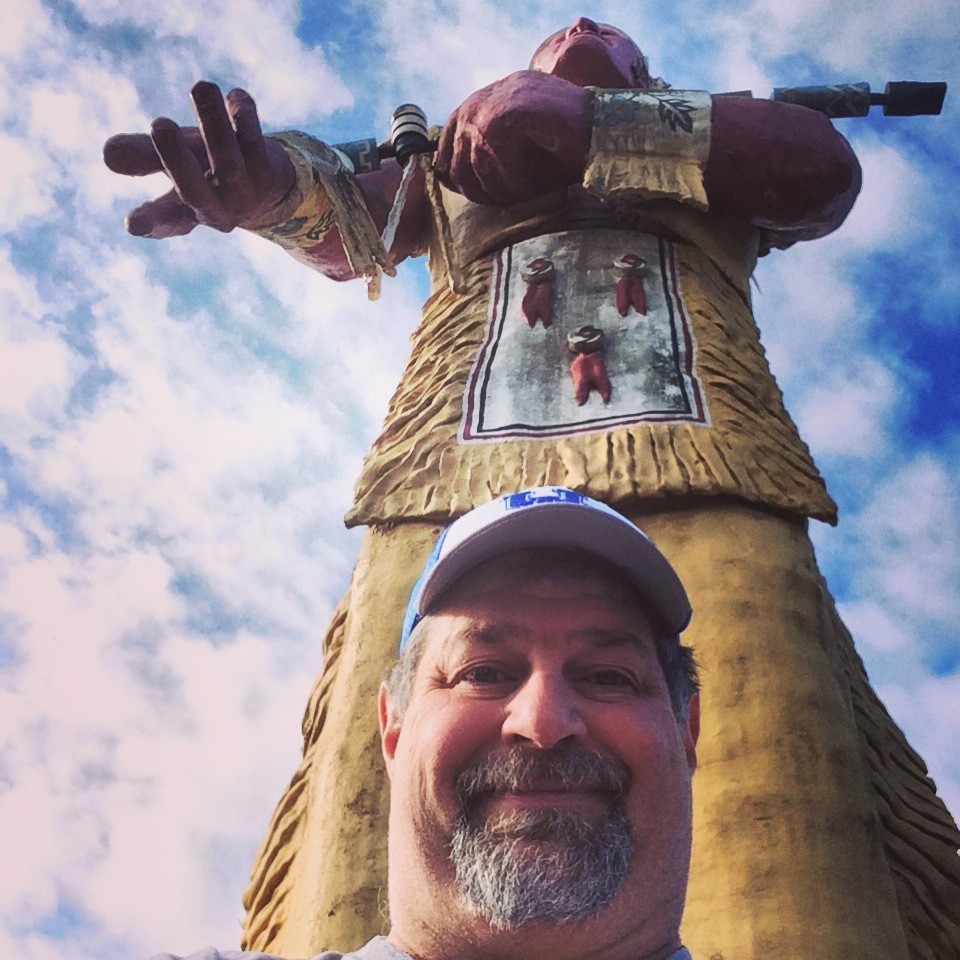 The “World’s Tallest and Largest Indian” Statue of Hiawatha in Ironwood, MI is another wonderful giant. Hiawatha stands at 52 feet and weighs 16,000 pounds, including anchoring internal steelwork, and is engineered to withstand 140 mph winds. Hiawatha was built in Minneapolis in 1964, transported to Ironwood and erected in the “caves area,” on the site of the Old Norrie Iron Mine. 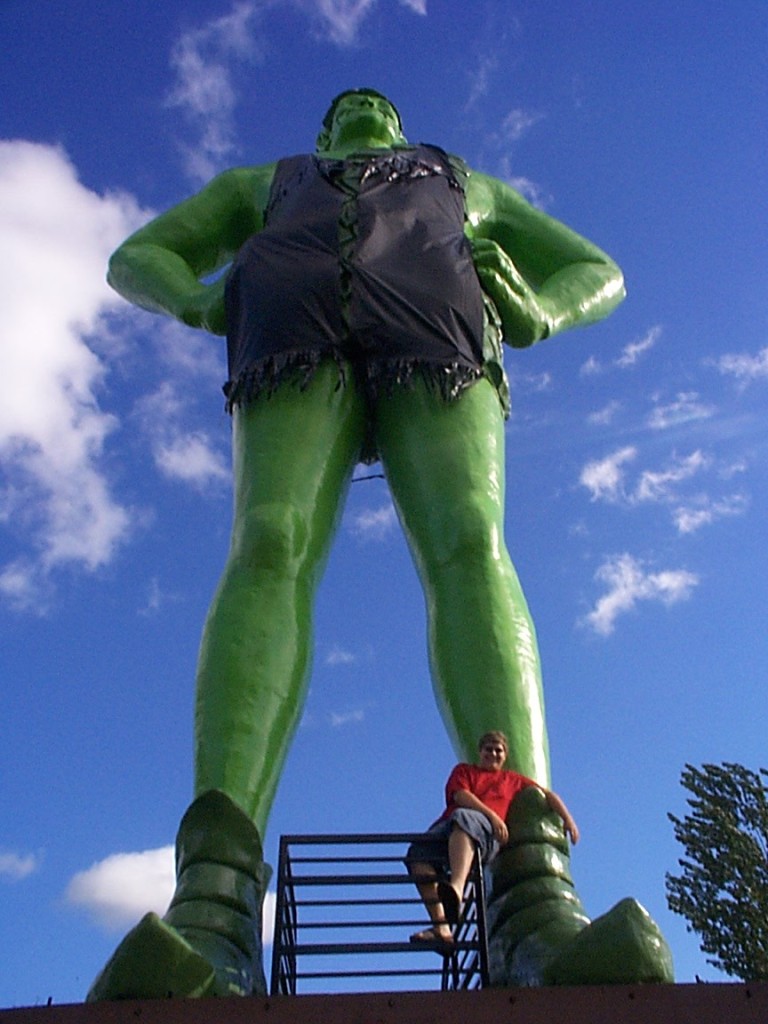 An icon of television advertising, the 55.5 foot tall Jolly Green Giant in Blue Earth, MN is another giant. This was built in 1979 by a radio station owner and commissioned by a Wisconsin company to build it. I have visited twice and both times was not able to do much due to torrential rains. The picture above is of my son Seth from a trip he took in 2005. 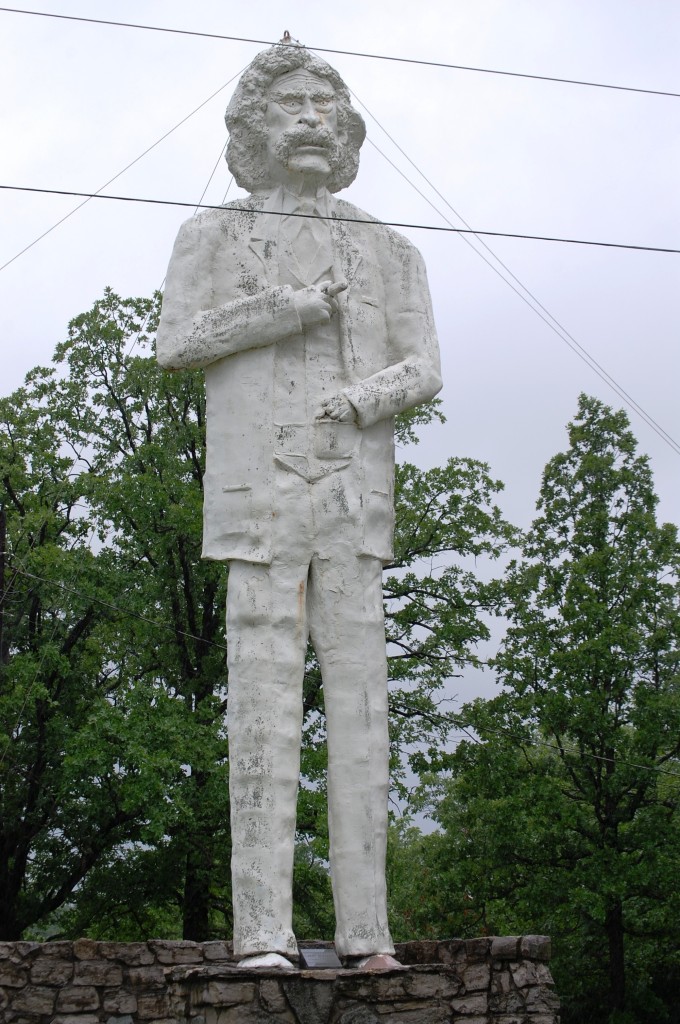 One of the last “giants” that I have visited is along the highway near New London, MO. This nearly 45 foot tall statue of Mark Twain is kind of funky with a giant head and small hands, but, it definitely fits the category of “giant”

2 thoughts on “S is for Super Statues – #atozchallenge”