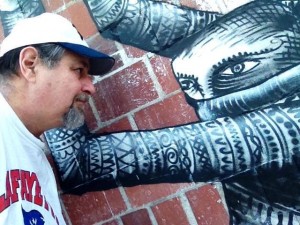 A few days ago I posted about a number of new and recent murals that now grace the walls of buildings in Lexington (see the post here).  Some of these, including the massive Lincoln mural, are part of the annual PRHBTN celebration of art forms that have been criminalized, marginalized, and under-appreciated in the mainstream.  In the past week since the completion of the Lincoln project, four other giant works have been completed by three different urban artists including Phlegm from Britain, GAIA from Baltimore, and Odeith, from Portugal.  All of these works are just a tad off the beaten path, but well worth seeking out. 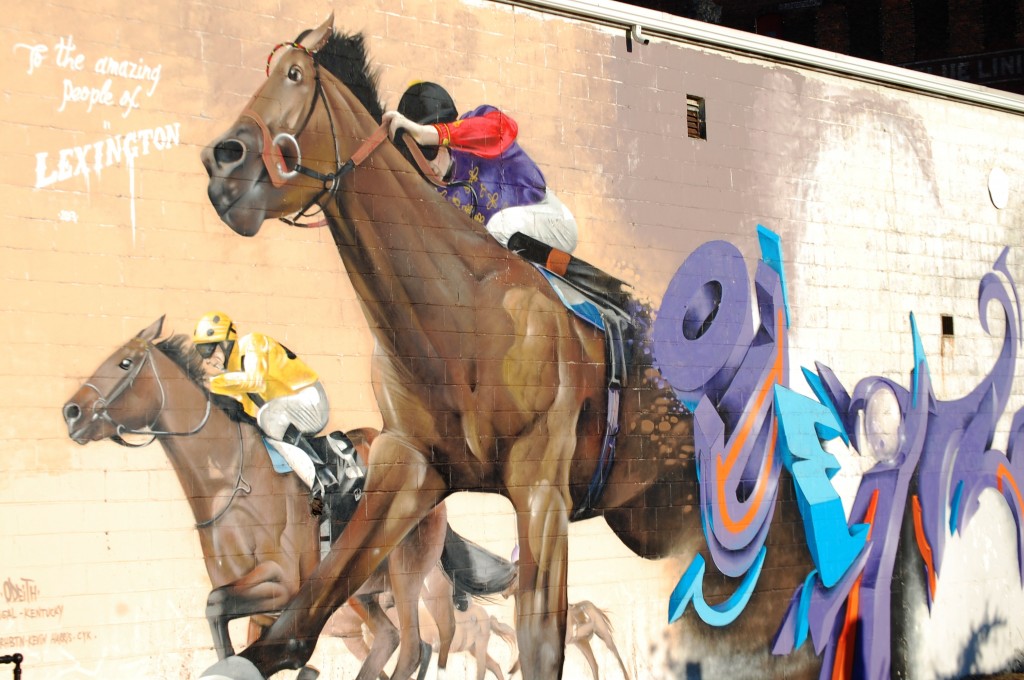 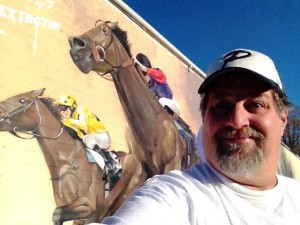 This mural is painted on the side of the old Rescue Mission wall by the railroad tracks on Limestone near Loudon Ave. The horses represent Lexington’s racing history and then his graffiti like signature to the right. Odeith has been doing spray paint art since the 1980s.  See his Facebook page. 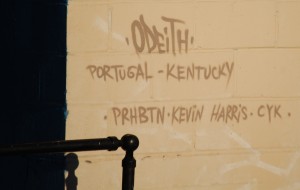 From Limestone you can turn left and head to N. Broadway.  Along the way check out the mural on the side of the LexTran Building…. 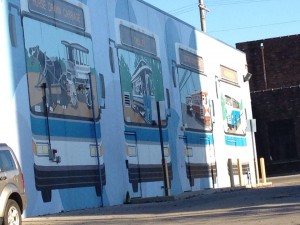 This piece was done for the LexArts Outdoor Murals Project a couple of years ago. 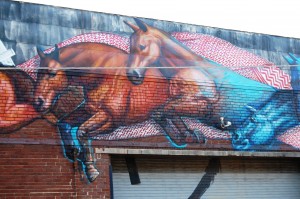 After passing by the LexTran building, make a left on N. Broadway and head into town.  When you arrive at 6th Street, make a right and go three blocks.  Turn right in front of the West Sixth Brewery and GAIA’s (see GAIA’s Facebook page) large horse mural unfurls before you…Thoroughbred horses leaping off of an empty equestrian pedestal as a keffiyeh print from the United Emirates unfurls in the background. 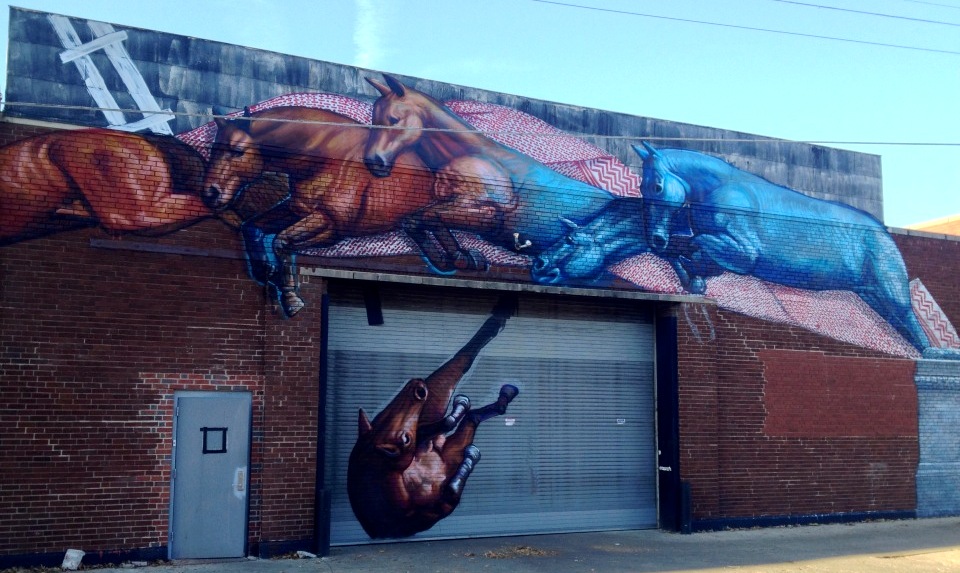 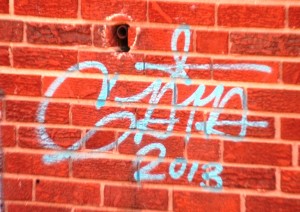 Continuing on the PRHBTN Tour, go back to 6th Street, turn right and then left on Jefferson.  Follow Jefferson to Main St., turn left on Oliver Lewis Way to cross over the tracks and then make the next right on Manchester.  You will need to follow it all the way until you see the big red brick building and water tower on the left, home of Barrel House Distillery. Here you will find another amazing piece of work, almost as large as Lincoln.  British artist Phlegm completed his unique mural on the side of the wall of the old distillery…with a dinner for two at the top. 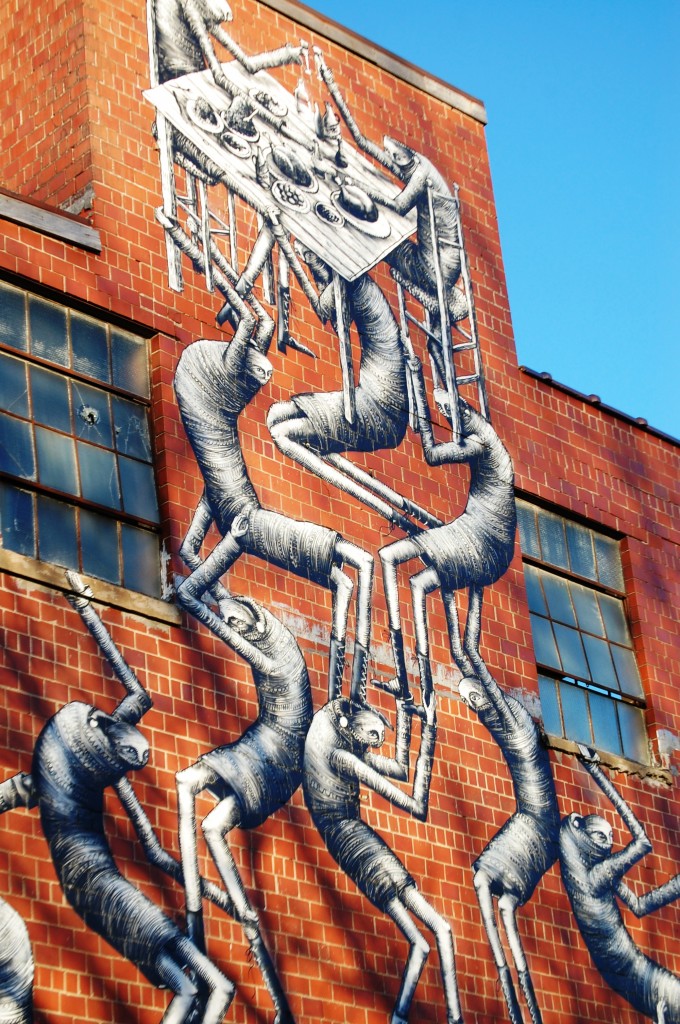 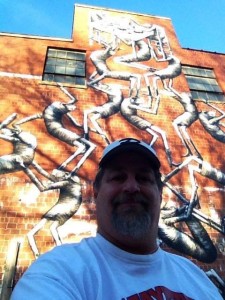 Sumoflam with Phlegm work in Lexington. 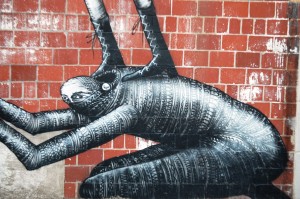 While Phlegm was there he also got an invite to add some character to the old water tower on the property. 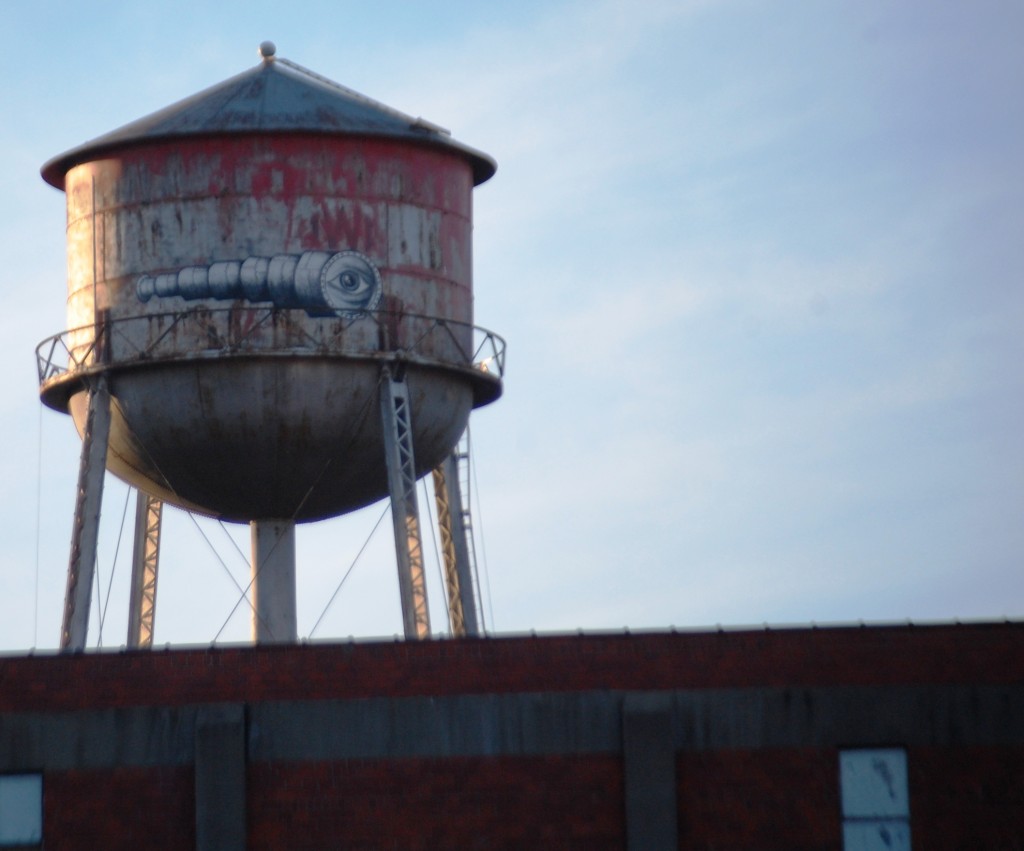 A couple of other walls at the distillery have some unique art painted on them, and I got these as well.  No idea how old they are. 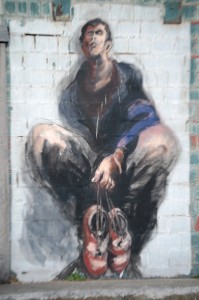 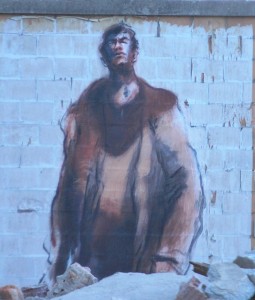 While in the Manchester area, you may want to check out a couple of other works of urban art.  Take a right onto Manchester and a couple of blocks n the left is the D.C. Electrical Contractors facility.  There they have a wonderful Einstein on the garage and some other graffiti art on a couple of walls.  Not sure when these were done or who did them.  But nice nonetheless. 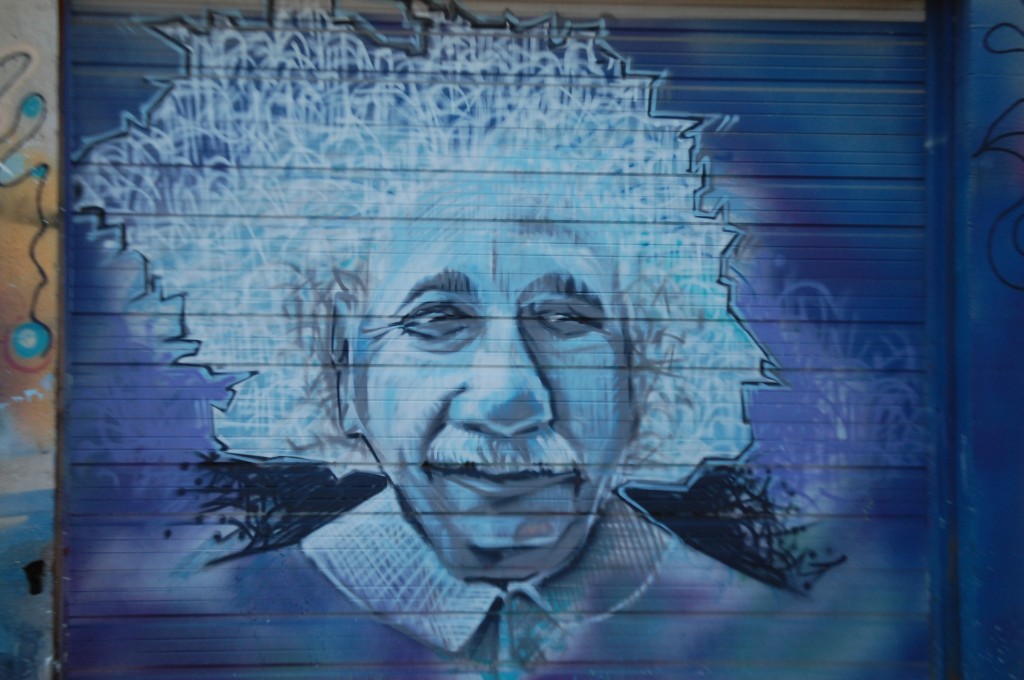 Einstein on garage at DC Electrical on Manchester in Lexington

So, when visiting Lexington, don’t just think about the horse country, the bourbon and the bluegrass.  Think modern urban art. It is now dotting the city and you can’t miss these great attractions!!