Back in August 2010 a new TV Series began on the History Channel that got me hooked, literally. Called “Swamp People,” the series focuses on various teams of alligator hunters. Some episodes also feature other aspects of the social and sporting life of the swamp, including fishing and hunting for other animals. I was thoroughly engaged. In fact, I distinctly recall while watching one of the early broadcasts in 2010, telling my wife “One day I am going to Louisiana on a road trip and meet Troy Landry in Pierre Part.” It was one of my “bucket list” dream trips, though I figured the reality would never materialize. 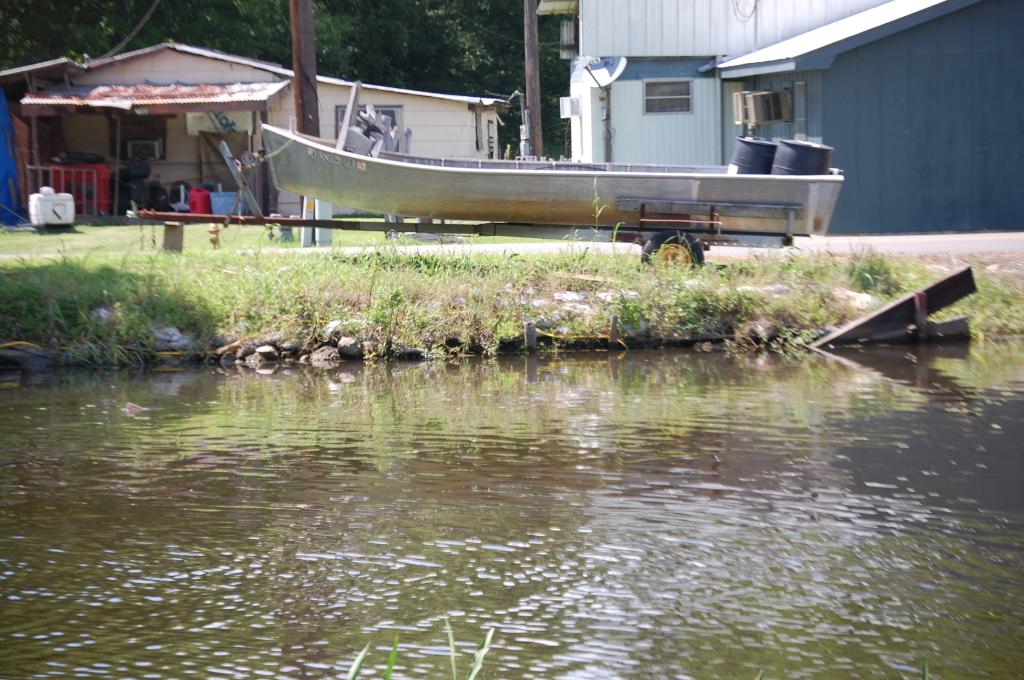 On the Swamp in Pierre Part, Louisiana

Then, in late June 2014 the opportunity presented itself. My Kravetz family relatives arranged for a big family reunion in Galveston (many of them now live in Texas). The drive from Lexington to Galveston opened the door to making a trek through Louisiana. Indeed, I made a big trip of it with a drive down the Blues Highway in Mississippi (see one of the posts here), a trek across Louisiana and some visits to other fun sites. I have already done a few posts about this trip and more to come. (See some posts HERE and HERE and HERE). 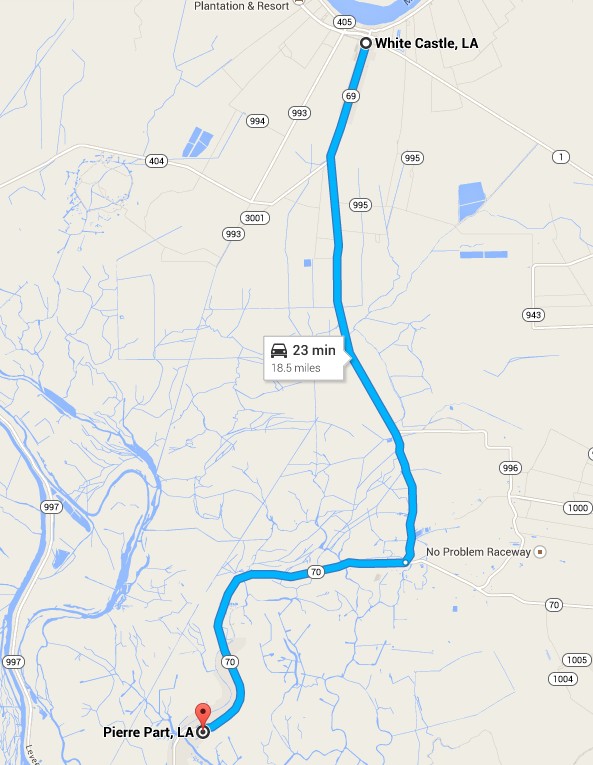 But, the diamond jewel of this big trip took place on Day 2 of my journey as I headed west from Baton Rouge into the Atchafalaya Swamplands, the setting for the Swamp People series. 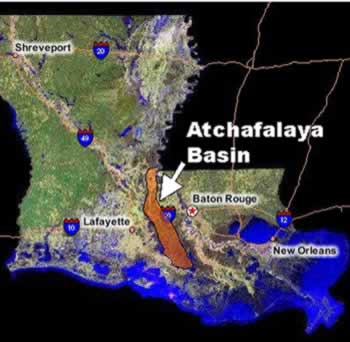 So, I finally had the chance. I did the necessary research and was able to make my way into Pierre Part to look for Troy Landry, the Alligator hunter on the show known for his “Choot ‘Em” phrase. 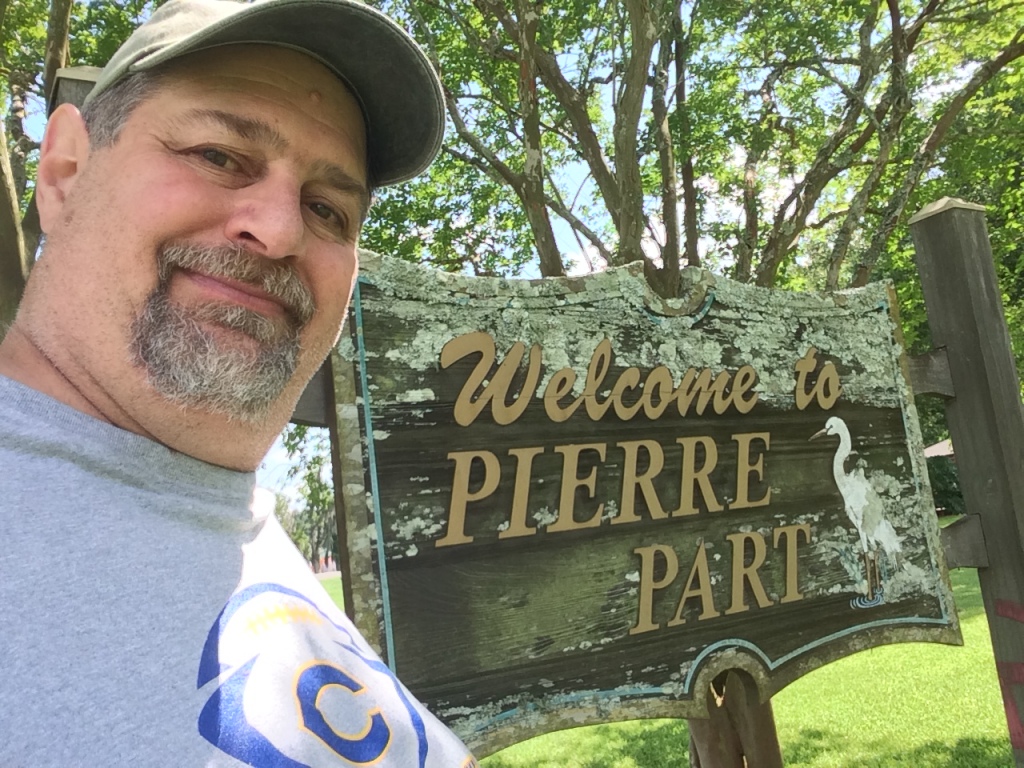 The drive through the swamplands was beautiful, as expected. 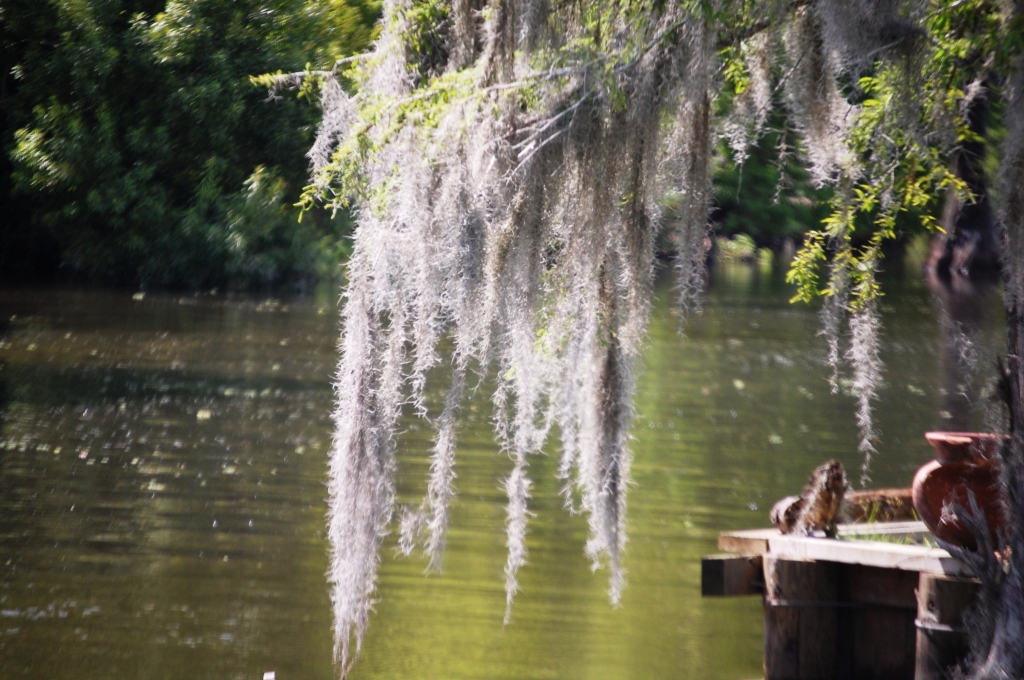 A scene from a Bayou in Pierre Part 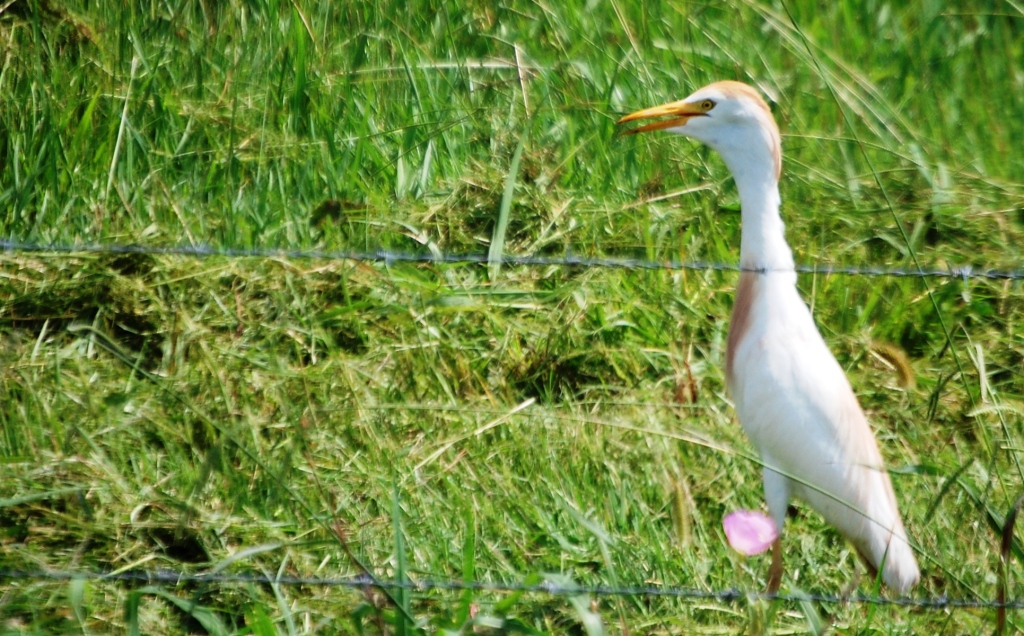 Egret on the prowl in Pierre Part, LA

Pierre Part, a small town in the swamps, is the home of the Landry family, where they run a Bait Shop, gas station and convenience store business, along with their alligator and crawfish hunting business. 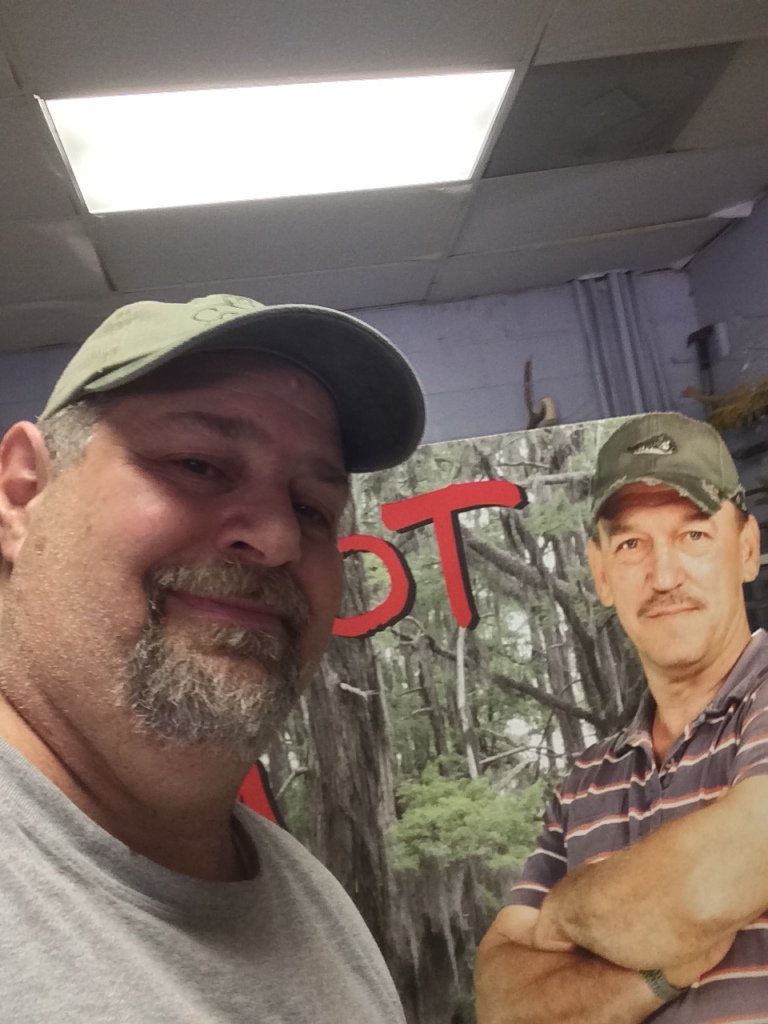 At the Landry Bait Shop in Pierre Part

My research indicated that Troy typically is around the shop, so, I made my way to find it, a Shell station (Duffy’s Shell on LA 70)  just south of town. I knew I was at the right place as there were posters, “Choot ’em” hats (I got one!), etc. I asked the gal at the register as I purchased my hat if Troy Landry was around. I was heart-broken when she said “Oh, you just missed him. He left 5 minutes ago.” She then proceeded to tell me that I could ask one of the guys filling gas in their boats as they were his friends. So I went out and asked them. One of the guys said that he was out back and pointed me in the direction. 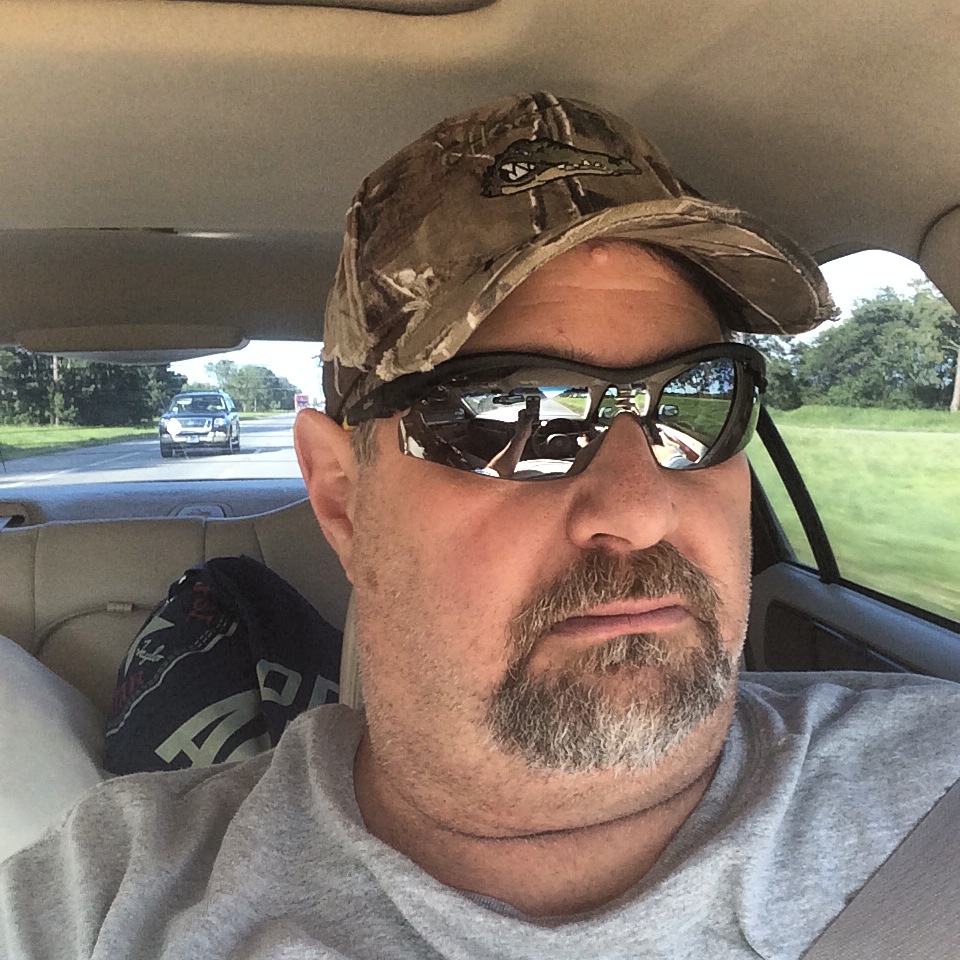 Sumoflam and his “Choot ‘Em” Hat made famous by Troy Landry

The store has a warehouse in the back that is used to store crawfish and alligators in the season. It is fairly big. As I walked back there I saw a big Ram Pickup with Swamp People emblazoned across it. And then, over at the scales there he was. Fishermen were coming in with their crawfish takes and he was weighing them and then putting them into his cold storage area. This is apparently his “real” job, working as a buyer of the crawfish and then a resale distributor. 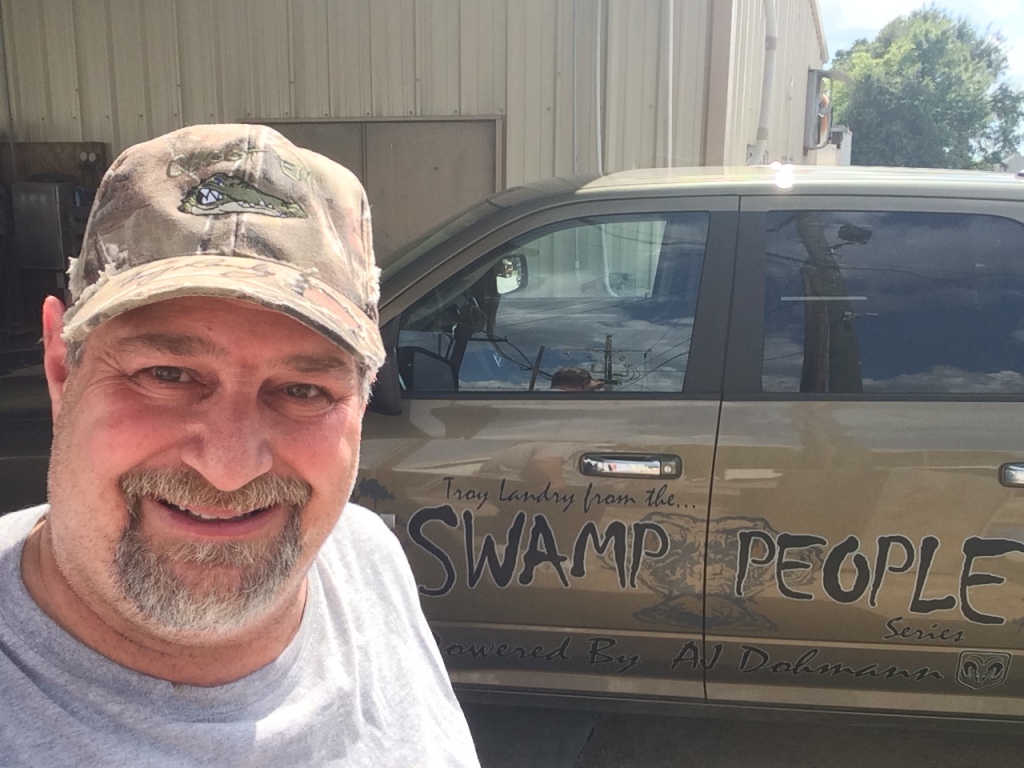 As I approached Troy, he was friendly as can be (maybe the hat helped…). Since he was busy weighing, I waited patiently. He then took my hat, without asking, and signed it, I proceeded to ask him for a photo and we took a couple. I told him how I had someday hoped to make it down here to meet him. He told me some good gator stories and then another couple of crawfish boats pulled up with their catch. 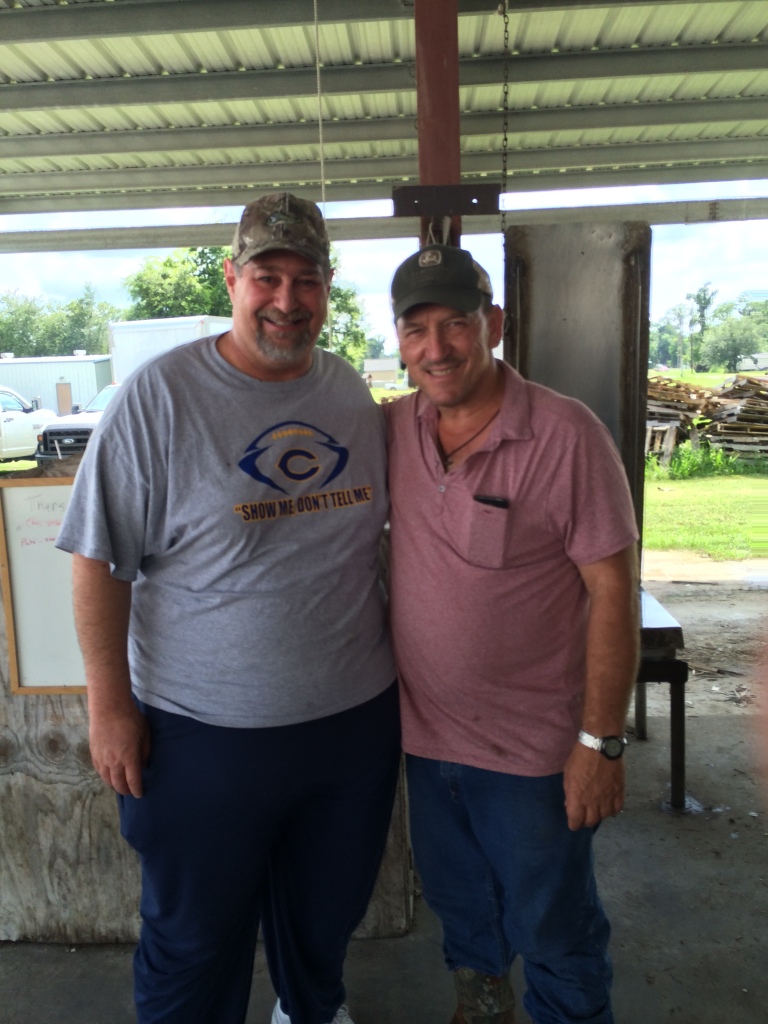 I said goodbye and thanked him for his time. I was impressed at how personable and down to earth Troy Landry was. His TV appearances had not caused him to be put off by fans like me. 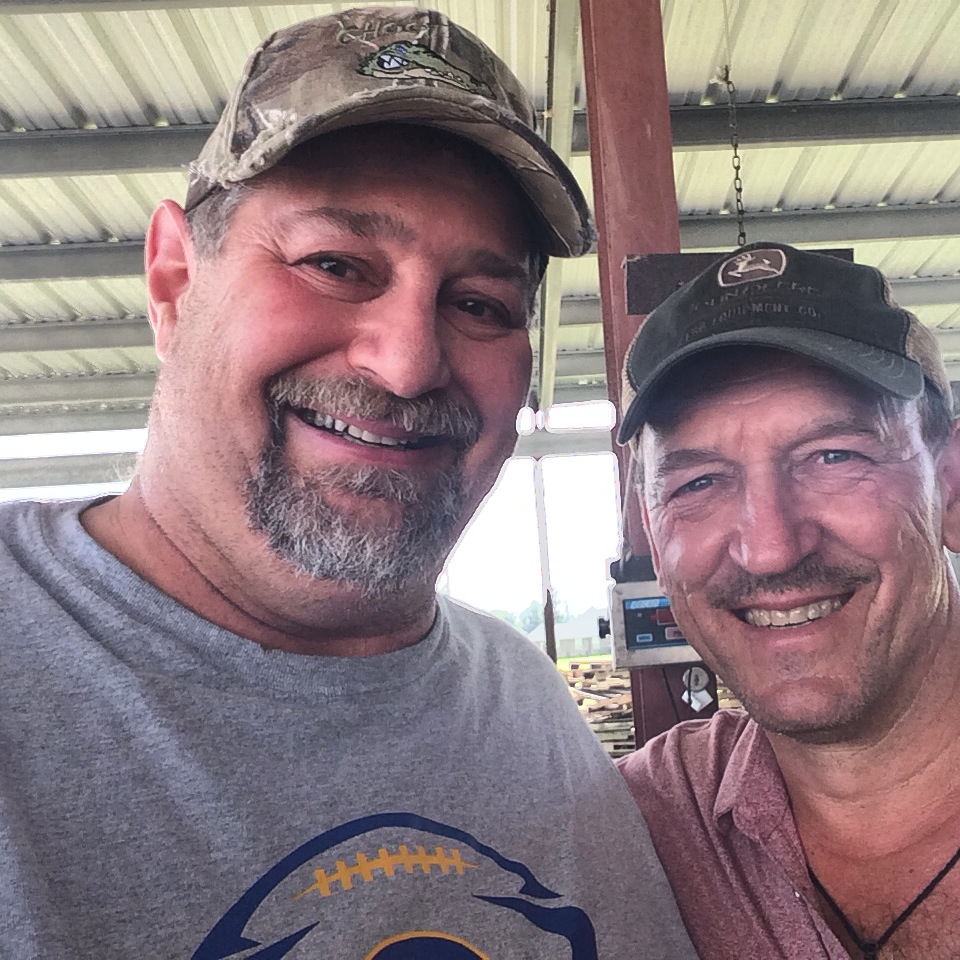 Honestly, I am not one that goes ga-ga over celebrities. I have met many in my life (see this post about a few of them). But “Reality TV” has made stars out of many everyday people, such as the pawn shop folks, the American Pickers, auctioneers (Storage Wars), etc. this digging into the unique lives of many Americans has provided a richness to our diversity (even despite the apparent contrived situations that many of the shows have). 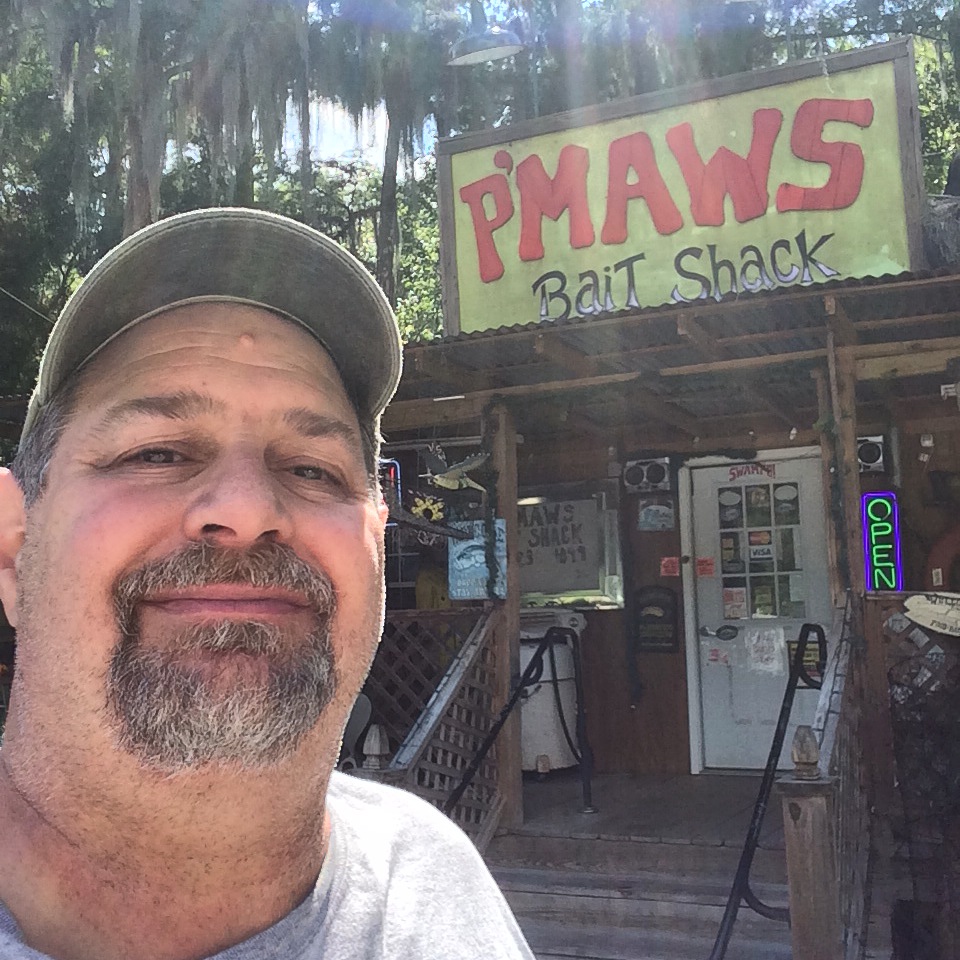 I am thrilled that I could make it to the swamplands of Louisiana to meet this interesting guy named Troy Landry and experience his down to earth character. Another bucket list dream trip fulfilled! 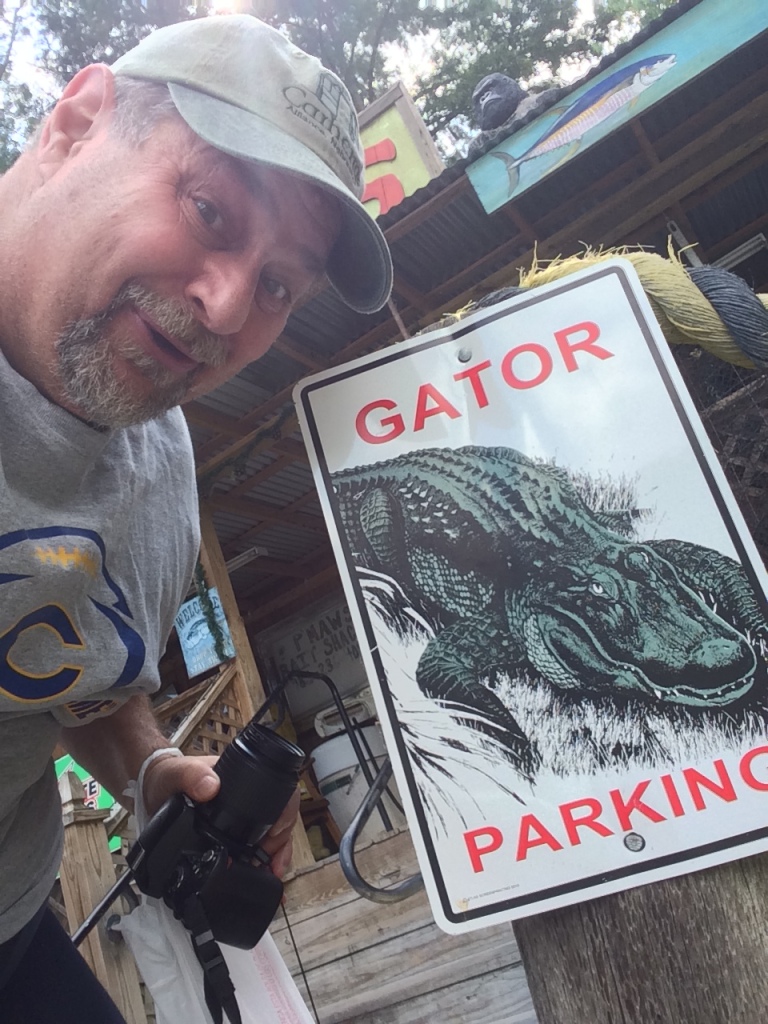 I had a Gator-riffic time in Pierre Part, LA

Watch my blog soon for Part 2 of my US Hwy 61 adventures through Mississippi, the entire trip through Louisiana and into Galveston. (Will be at https://lessbeatenpaths.com/vicksburg-ms-galveston-tx/ when posted later this week)