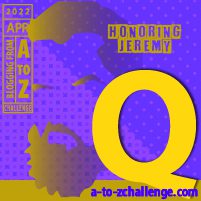 Tis will be one of the Quicker reads for y’all since there are not many places that begin with the letter Q and I have been to even less of them.  However, I will queue up a few for your viewing enjoyment.

Honestly, since I watch a lot of TV, and have a liking for Family Guy, I ALMOST included Quahog, Rhode Island in this post.  This is the town where the Griffin family resides. Quahog (pronunced KO-hog) has about 800 people and even has a Zip Code of 00093.  Ironically, there is town in Rhode Island called Quonochontaug (pronounced kwan-a-kan-tawg) located a couple of miles south of US 1 on the Atlantic Coast, but I have not been there (though I have been to Rhode Island). It is actually a small village and part of the the city of Charlestown.

This town was a pleasant surprise for me when I was traveling to Forth Worth from Amarillo. I took TX Hwy 86 because I wanted to drive through Turkey, Texas.  But, I found this small town of about 400 to be interesting. I learned, first of all, that the name of the town is pronounced KIT-i-kway by the locals.  Also, the town name was apparently derived from an Indian language meaning “end of the trail.”

Though the town is small, it has a personality.  It is home to the Comanchero Canyons Museum (which I did not have the opportunity to visit on that trip since they are only open on Saturdays).  But, the town also had some great murals and a true cowboy feel.  In fact, it is also the Bison Capital of Texas.

Quincy, Illinois is a Mississippi River town.  I have been through on a a few occasions when visiting the historic town of Nauvoo, an old Mormon settlement. Some of my adoptive mother’s family are also from Quincy — the Hanks Family.

Some of you movie fans may recognize the name of this town from the Academy Award winning Film Nomadland. Long before I began writing blogs and books, I made a trip to California and passed through Quartzsite, Arizona.  It is one of those places I would like to return to someday. It is located at the crossroads of Interstate 10 between Phoenix and Los Angeles, and US Highway 95 between Lake Havasu City and Yuma. This area was a gathering place for pioneers on their way to the rich gold fields in California, a way station and hub of activity for travelers going in every direction.  It is now a gathering places for “Nomads,” folks who travel and live in their trailers, vans, etc. One site in town worth looking into is the marker for Hi Jolly (aka Hadji Ali) became one of the first camel drivers ever hired by the US Army to lead the camel driver experiment in the Southwest. Hi Jolly became a living legend until his death in Arizona in December 1902.

I admit, this is stretching it a bit, but, when you are in downtown Cincinnati you may come across the Sing The Queen City sign as shown below. The classic nickname “Queen City” is taken from the 1854 poem Catawba Wine. In it, Henry Wadsworth Longfellow wrote of the city: “And this Song of the Vine, This greeting of mine, The winds and the birds shall deliver, To the Queen of the West, In her garlands dressed, On the banks of the Beautiful River.” In the 1850s, Cincinnati was the largest westernmost inland city from the East Coast.  There are many wonderful things to see in Cincinnati — a great zoo, fabulous museums, dozens of impressive murals on the sides of buildings and more.

I have driven all over the state of Kentucky on every back road I can find.  On one trip near the town of Jackson, Kentucky, I took KY Hwy 30 south and made my way into the small community of Quicksand…totally by a fortuitous accident. The community sits along the North Fork of the Kentucky River where Quicksand Creek flows into the river.  The area was settled in the 1790s by Joseph Back and his family, who had come from Culpepper County, Virginia.  No idea how the name Quicksand came into being (though I can assume it had to do with the river!)  There was even a Post Office there until 1996. I got a picture of the bridge…as evidence I had been to Quicksand.

Over the years, way before I was blogging, I did occasionally go through other Q named towns, such as Queen Creek in Arizona, Quitman, Arkansas and Quarryville, Pennsylvania. But, not pictures or stories.

Whew!!  That was a quick trip to see a couple of Q towns.