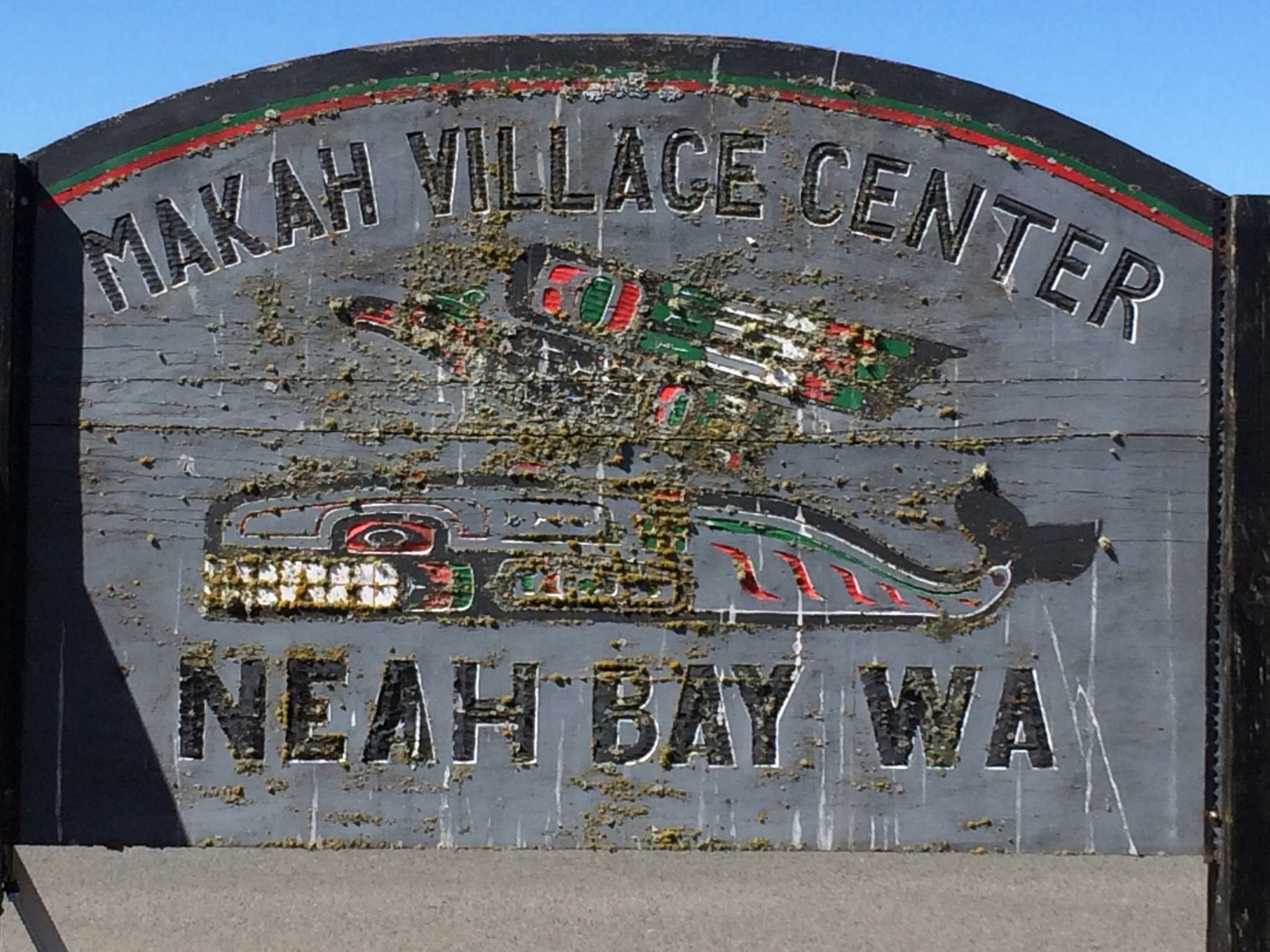 On day three of our visit to Washington State, we took our longest road trip, all the way to the most northwestern point in the contiguous United States. We made our way to Neah Bay, a round trip of over 320 miles, along the Strait of Juan de Fuca Scenic Byway (WA Highway 112 – see route below)

We got off to a late start but were soon on our way northbound on Washington Highway 3 towards Port Gamble.  From there we would take the Hood Canal Bridge, which is a floating bridge that connects the Kitsap and Olympic peninsulas.  At 7,869 feet long, (floating portion 6,521 feet) it is the longest floating bridge in the world located in a saltwater tidal basin, and the third longest floating bridge overall.

The drive northwest from Port Gamble is a beautiful drive with the Strait of Juan de Fuca to the north and the mountains of Olympic National Park to the south.

Also, from this highway and across the water to the north we were able to get a glimpse of the snow covered Mount Baker, which is the third highest mountain in Washington at 10,781 feet.  Like Mt. St. Helens, it is an active glaciated stratovolcano.  After Mount Rainier, Mount

Baker is the most heavily glaciated of the Cascade Range volcanoes and the volume of snow and ice on is greater than that of all the other volcanoes in the Cascades (except Rainier) combined. Apparently, it is also one of the snowiest places in the world; according to a Wikipedia article, in 1999, Mount Baker Ski Area, located 8.7 mi to the northeast, set the world record for recorded snowfall in a single season—1,140 in.  WOW!!!

Of course, this area abounds in massive trees, including some of the tallest in the U.S.  Our drive would take us through large stands of Douglas fir, Ponderosa and Lodgepole Pines and humongous hemlocks.

I’ll have more about these further on in this post.  But I must say that their grandeur and beauty are something to take in, behold and stand amazed by.

From the highway there are a few trees that stand tall above all of the others.  Some of these are 150 to 200 feet tall….the height of a 20 story building!!

Highway 104 soon merged with US Highway 101 (known in California and Oregon as the Pacific Coast Highway), which stretches 1,540 miles from the Los Angeles area all the way to Tumwater, Washington (technically), but continues to go north to Aberdeen and then on to Beaver, WA.

called Fat Smitty’s, a really quirky, yet fun place, with my kind of funky wood carvings and more. (I’ll have a different post all about this place HERE).  The whole fun of this place is not the food, which was good, but not extraordinary, but rather the atmosphere.  The inside is plastered with dollar bills everywhere (and a few other denominations here and there). See more on my post.

Of course, on road trips I am always on the look out for fun things and just shortly past Fat Smitty’s on US 101 we passed Chicken Coop Road. Chalk up another unique road sign to my collections!!

US 101 then passes through the lovely coastal town of Sequim (pronounced by the locals as Squim).  With coastal beaches, near a rainforest and within sight of Olympic National Park, Sequim would be a great place to visit (if we only had the time!!)

From Sequim we next drove through Port Angeles.  I had hoped we could head up to the Dungeness Spit, but not enough time.  The road from Port Angeles to Neah Bay is windy and slow going (not at all “Strait” like the Juna de Fuca!!).  This is actually the real gateway to the Juan De Fuca Scenic Highway.

Once we hit the Clallam Bay/Sekiu area on Hwy 112, the beauty of the coast burst out before us.  Lovely beaches and coastal scenes provided a change from the Pine walled highways.

Just off of the highway we could see the lovely seagull covered beach of Clallam Bay and then into the small fishing town of Sekiu (pop 27 in 2010), where we caught a glimpse of the famed wooden fish named Rosie…in her swimming outfit and running shoes. HA!

The drive west from Sekiu is quite scenic.  To the north is the Strait and beautiful small islands and to the south was giant trees…true Northwest character. But the road is windy and slow going. Thank goodness for the scenery.

Not too far down the road from the Seal and Sail rocks is the approach into the small town of Neah Bay, which is located on the Makah Indian Reservation.

It is a small fishing town nestled in a corner by the Pacific Ocean to the west and the Strait of Juan de Fuca to the east.  Much of the area near the Pacific is high cliffs over looking the ocean.  Lots of Makah Culture surrounds the town.

From the town of Neah Bay we proceeded to Cape Flattery Road, which eventually leads to the Cape Flattery overlook, the actual northwesternmost point in the continental United States.  Cape Flattery is the oldest permanently named feature in Washington state, being described and named by James Cook on March 22, 1778. Cook wrote: “… there appeared to be a small opening which flattered us with the hopes of finding an harbour … On this account I called the point of land to the north of it Cape Flattery.”

We took this road to the Hobuck Rd. Bridge and went over the river towards the scenic Hobuck Beach on the Pacific Ocean. Upon arrival at the beach we saw a beautiful outcrop of land to the north of the beach.  It was also covered in morning fog, similar to that which I had seen at the Golden Gate Bridge a couple of months ago.

Hobuck Beach actually extends along Mukkaw Bay (also known as Makah Bay). This shallow bay is four miles long and is open to the Pacific Ocean five miles south of Cape Flattery.  Apparently, the name of this bay is spelled as the Makah Indians pronounce their tribal name and therefore is not a misspelling, according to some items I have read.

The ocean crashes in beautiful waves at this location and there are numerous rock outcroppings dotting the waters.

I really loved the opportunity to sit on the beach and hear the crashing of the waves and it was also so pleasant to watch my daughter’s family play in the ocean and in the tidal pools.  I grabbed a few shots of this great place…way more than can be included in this post.  But here are a few of my favorites…just to provide a taste.

After about a couple of hours it was time to leave the beach and return to Port Orchard.  We returned through Neah Bay and then back along the Strait of Juan de Fuca Scenic byway, which presented a different view for us as the tides were changing.  We followed Hwy 112 back through Sekiu and Clallam Bay and then towards Sappho Junction on the border with Olympic National Park and US Highway 101. From there we headed east on US 101 towards Port Angeles. 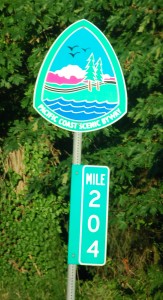 We actually didn’t mean to take this route as it technically took us out of our way.  But I am really glad that we “suffered” through this divergence.  The highway was lined with tall trees, there were some great mountain views and then passing by the scenic Lake Crescent was wonderful.

Lake Crescent is a deep lake located entirely within Olympic National Park and is approximately 17 miles west of Port Angeles. At an official maximum depth of 624 feet, it is supposedly the second deepest lake in Washington.

I was actually surprised at how brilliantly blue the water appeared from the road.  My photos don’t do it justice, but you can see how lovely this lake is.  It would be a great place to rent a cabin and take a vacation.  Heck with the beach!!

From our western approach, we not only saw the lake, but there is huge mountain that sits behind it protecting it.  The mountain is called Mount Storm King and stands at an elevation of 4,537 feet.  Many climb its scenic trail.

It was getting late and we were all hungry, so we made our way into Port Angeles where we had hoped to find a place to eat.

This town of about 20,000 people is nestled between the Strait on the north

and the Olympic Mountains to the south.  Extremely scenic but also, as its name indicates, it is a port town.  There were big ships visible from the road as we drove into town.

This is another of those places that could have used more time.  On our next visit to Washington to see the family, I hope that we can spend a day in and around the Port Angeles area.  But, we did have enough time to track down a place to eat, and “The Bushwhacker” restaurant was our choice.   Actually wasn’t a bad place.  A very friendly family restaurant that serves seafood, steaks and other things.

Finally, evening approached, a full moon was in view and we drove off into the sunset to get home after a long fulfilling day.