While she rode, I visited a few of the places in the area.  I had visited the area in 2008, including the town of Charm.  (See my post HERE) In another trip in the early 2000s, we had also visited the unique town of Berlin.  I never did a post about the town and hope to make it there again sometime in the future.  On this particular visit, we didn’t make it to that part of Holmes County.  Rather, we focused on the towns surrounding the bike trails, beginning with Fredericksburg, OH and ending in Danville, OH. 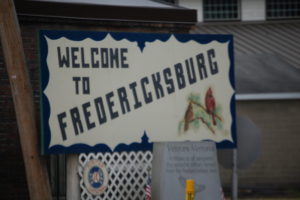 We took the five hour drive to Fredericksburg, OH, a small community of a little over 400 people.  This is where the Holmes County trail begins at the northern end. I dropped Julianne off at the trailhead, which is located right near the town park. 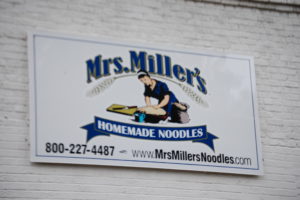 It is also a town frequented by the Amish and one can see their buggies around the town.

The town and surrounding area features Amish furniture shops, Amish cheese shops, and even a working blacksmith shop.  (See shop list HERE) There is apparently a car wash that can also be used for the buggies.

From Fredericksburg, I drove south on OH County Road 192 to Holmesville which was the next town along the trail.

The drive to Holmesville went along some lovely cornfields and other farmland. The roadside was dotted with sunflower fields and wildflowers as well.

The Holmes County Trail is a unique bike trail in that bikers share the trail with Amish Buggies.  The trails have signage for both and there were instances during the day where I saw both bikes and buggies.

The trail runs along some beautiful farmland (as did my drive). It made for a nice scenic ride for Julianne.

The next section of drive is along Ohio Highway 83 which goes to the larger town of Millersburg, OH, which is in the heart of Ohio’s Amish Country.  There are many shops here and the town is just a few minutes west of Berlin. When I visited Berlin a few years ago, we visited the large Heini’s Cheese Chalet, but I had never written a post about it.  Though I didn’t visit it on this trip (its address is in Millersburg, but it is actually closer to Berlin), here are a few photos from my visit in 2011.

Millersburg is also home to Hipp Station, the main information center for the Holmes County Trail.   It houses the Millersburg Depot which contains a shop, information, refreshments, etc.

There are nice benches to relax and, as it is right on the bike trail, it is a good place to look at the  bikers and buggies ride by.

A drive through Millersburg also provides a look at some old fashioned signs from the past.  Its a quaint little town and there are even a few fun surprises!

And then there is the fun surprise….Millersburg is a place where the streets (at least one of them) have No Name!

The final rideable section of the Holmes County Trail takes riders from Millersburg to the village of Killbuck, ending at the old Killbuck Depot on Main Street (OH County Road 622).  Basically, I drove down US Route 62 (the Amish Country Byway) from Millersburg to the CR 622 turnoff. Its a nice drive and Killbuck is in a nice region of the county.

Julianne was fortunate to get into Killbuck just as a heavy duty thunderstorm emerged.  We got her into the car dry as the deluge hit.

The Holmes County Trail from Killbuck to Glenmont is closed, so Julianne’s bike was loaded and we headed to Brinkhaven (via Glenmont), which is the beginning of the Mohican Valley Bike Trail and also home to the “Bridge of Dreams,” the second longest covered bridge in Ohio.  I dropped Julianne off at the paved beginning of the trail near a tunnel that goes under US 62.

As Julianne rode down the trail, I returned to US 62 to head to the “Bridge of Dreams.”  Just near the tunnel is one of the iconic Mail Pouch Barns.  Many of these barns emblazoned with a Mail Pouch ad dot the southeast.

The Mohican Valley Trail is only a 4.5 mile stretch of bike trail that links the Kokosing Gap Trail (a 14.5 mile trail from Danville, OH to Mt. Vernon, OH) and the Holmes County Trail (currently connects to the primitive portion of the trail at the tunnel above).

The Mohican Valley Trail basically runs from Brinkhave, OH to Danville, OH.  Its major feature, as noted above, is the 370 foot long “Bridge of Dreams.” This classic covered bridge is of interest to all and is easily accessible by car visitors as well. 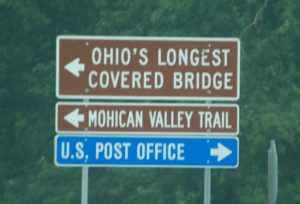 The Bridge of Dreams was originally built in the 1920s as a railroad bridge, and covered in 1998. It is the second longest covered bridge in Ohio after the Smolen–Gulf Bridge over the Ashtabula River in NE Ohio (which I visited a couple of months before it opened in 2008 – see my photo HERE), and third longest covered bridge in the United States. The bridge is closed to motorized traffic but is often used by Amish buggies.