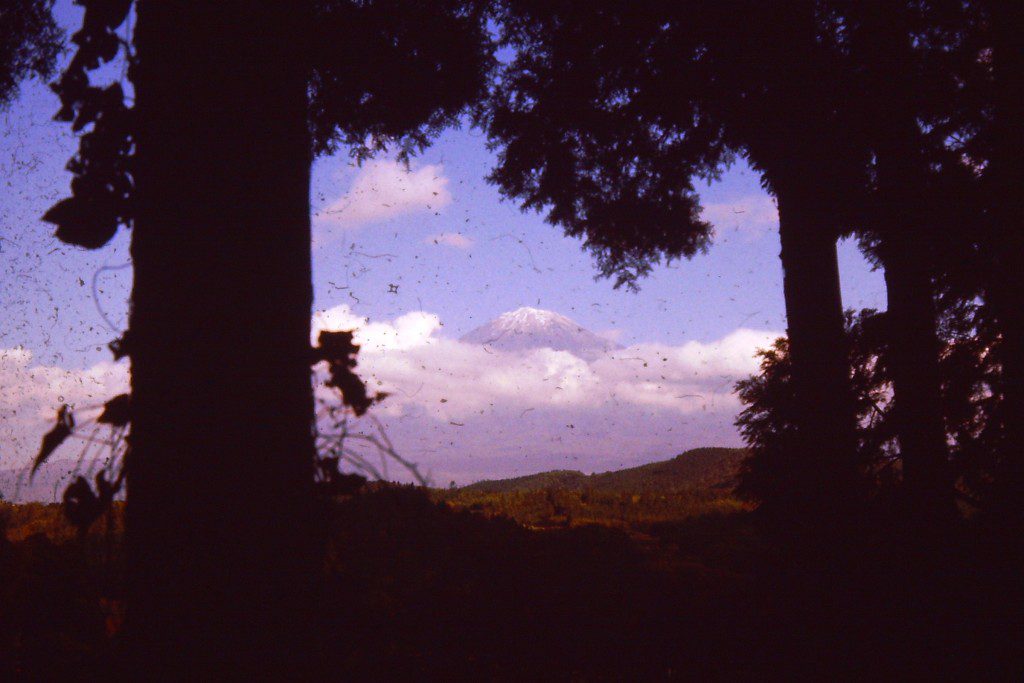 For this week’s edition of #TBT, I take a look back to 1976 when I served as an LDS missionary in Japan. Just a year earlier I had joined the church and, like some of my friends, as a 19 year old I was off to serve in a very foreign country.  (Please forgive the schmutz on the photos…many of these were scanned from 38 year old slides)

Prior to my trip to Japan, I had never been to a foreign country other than a couple of marching band trips to Alberta in Canada. Therefore, this was a new experience for me. I had to have a passport, a visa, shots, and the whole works. And though I had been on an airplane in the past, I had never flown on a humongous 747.  It was quite the experience.

After two months of language training in Provo, UT, I arrived in Japan with a number of fellow missionaries in mid-April 1976.

Our first night in Japan was quite interesting.  We were given a strange tasting juice and had “orange creme pan”, a piece of baked bread with an orange creme filling.  I was not used to the humidity at all.  It was wet out and the country was filled with strange new smells.  The country seemed crowded.  The subways were packed with black haired people.  It was all so new.

As missionaries, our main objectives were to preach and teach the gospel in our assigned areas as well as do service projects.  That is still the objective of Mormon missionaries today.  Despite this, we did have the opportunities to see sights in our assigned areas on our preparation days (p-days).  In this unique country, I tried to take full advantage of the opportunities.

During my 22 month stay in Japan, I was blessed to serve in some wonderful areas including Kanazawa, Nagoya, Fukui, Takaoka, Ogaki and Fuji (in location order).  Today those cities are all modern like most of Japan.  However, back then, many were still quite rural.  I got to experience living conditions similar to the Japanese.  Small apartments with tatami (thatched) floors, flash gas heaters, strange toilets, etc.

The landscape in Japan was either buildings or rice fields back then.  Almost all available land was used for raising crops of some sort.

Having grown up in a Christian country, it was quite a learning experience for me to know that most of the people in Japan were Buddhist (and/or Shinto).  In our door to door proselytizing it was not uncommon to hear “uchi wa Bukkyo” (meaning we are Buddhist).  They were always gracious to us “gaijin” (forigner) missionaries, as in many places we were still a novelty back in the 1970s. Many would listen, but the Buddhist religion was always engrained into their daily lives and cultures.  Same with Shinto…   So, everywhere we went we would see Buddhist shrines, large Buddhas, etc. I was fortunate to be in Takaoka, home of the Takaoka Daibutsu one of Japan’s BIG THREE Great Buddhas.

During my time in Fukui, we got to visit the famous Eiheiji Temple, in the middle of a cold snowy day.  Built in the late 1200s by Dogen Zenji, this temple is one of the Soto Zen sects’ two main temples.  When we were there we saw the monks walking across the wooden planks in bare feet, even in the midst of a snowstorm.

I visited other Buddhist Temples and Shinto Shrines during my stay, but none was as impressive as the Sokkagakkai Taisekiji, home of the Nichiren Shoshu sect of Buddhism.  Located in Fuji-no-Miya, at the base of Mt. Fuji, the old was mixed with the new.  Like Taisekiji, the original temple was built in the late 1200s, but they also built a HUGE building with ginormous pillars.

Another item of Japanese culture that I became enamored with was the castles from the 1600s.  Japan is dotted with castles, but in my mission area, there were only a few.  The famed Nagoya Castle is known throughout the world. I got to visit, but was only in Nagoya for two months and never got to go there on a day off so I have no pictures.  The Gifu Castle, in Gifu, is also famous.  It was original built as a fortress in the 1200s, but by 1597 was a full fledged castle.  I lived in the neighboring city of Ogaki in 1977 and so was able to visit the Gifu Castle.  On my way home I got to see the Imperial Castle in Tokyo…not as impressive.

The real highlight of my mission in terms of places to be, was living in Fuji City.  It was a moderate climate, well known for its green tea and mikans (mandarin oranges) and, of course, Mt. Fuji.  While in Fuji I took over 100 photos of the mountain that had a different personality daily.  I was blessed to visit Mt. Fuji again in the 1980s and again in the 1990s.  Certainly my most lasting memories of the country.

I got to ride the bullet train a couple of times while in Japan.  It was an amazing ride back then!

I spent nearly a year on the Japan Sea side of the country while in Kanazawa, Fukui and Takaoka.  My first winter in Japan was a monster.  I was living in Fukui.  We rode bikes everywhere.  I had spent time in Denver, Great Falls and Bozeman growing up, so I was used to the snow, but the snow of Fukui was astounding.

Then there was the exotic food in Japan.  I had to learn to eat many interesting things…squid, octopus, dried fish, daikon radishes, miso soup and more.

Another wonderful experience I had was turning 20 while in Japan. The country has a tradition of “Seijin-shiki” or Coming of Age Ceremony.  We got to attend one in Fukui (I think….).  All of the girls wore nice Kimonos.  I got a picture with them…

Then, there were all of the kids.  Everywhere we went they would approach us and say “This is a Pen!!” – the only English they knew.  I loved to play with the kids (and still do nowadays!!)

And here are a few more photos from Japan…shopping, parks, cities…

I loved Kenroku-en in Kanazawa.  A beautiful park, it was only a block from the LDS Church in Kanazawa, so we got to see it all of the time.

Obviously, this two year mission had a profound impact on my life.  I returned home and by 1987 was back in Japan working for the Oita Prefectural government.  But that is another story….