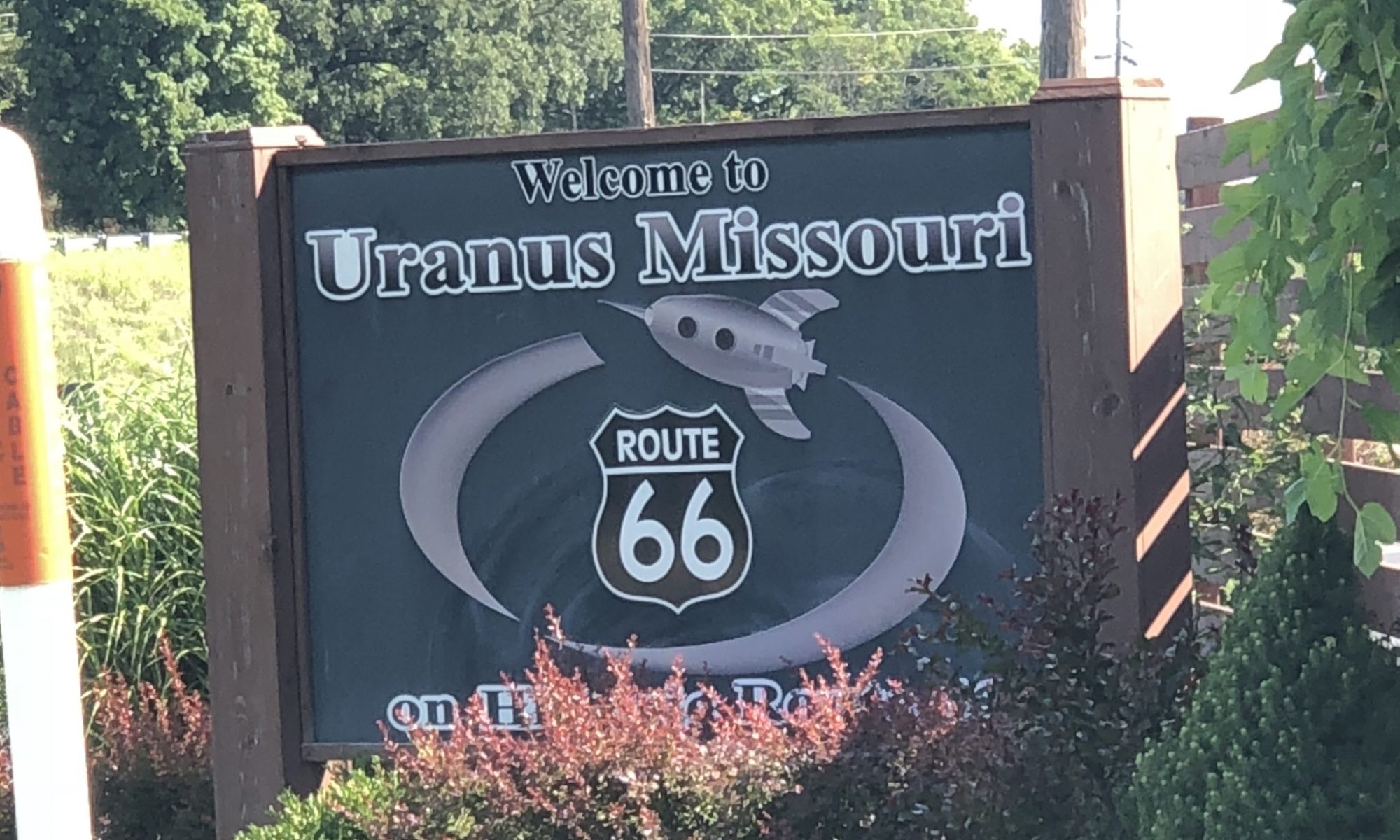 In late July and early August 2018 I had been on the road traveling with my granddaughter for nearly two weeks and we finally made our way to US Route 66 in Oklahoma and Missouri. On our last night on the road, we spent the night in Springfield, Missouri. As we departed down Interstate 44, one of the first things I saw was a sign telling us to visit Uranus at exit 163! REALLY? In all my years of traveling, I had never heard of this place. As we headed east we continued to see signs…you know, the “Tourist Trap” type of signs that try to draw you in.

The term “Tourist Trap“ tends to be used in a derogatory fashion for a place that tries to draw tourists in with unique offerings and then once the tourist is drawn in, they are “trapped“ such that they will likely purchase items that they don’t probably need. As a seasoned traveler on the back roads of America, I have run across many of these so-called “tourist traps.“ I find them rather fun! Many of them offer similar things like cups or small shot glasses emblazoned with their particular business name and logo. Perhaps, it might be better if you call a “Tourist Trap“ a “Tourist Haven.“ Why? Well, these places are usually a perfect place for a break from the driving, a restroom break, cold drinks and snacks and a chance to have a little fun while on the road. Entertainment for smaller kids and entertainment for adults…all in one convenient location.

Of course, you will be able to find the T-shirts, the magnets and the many other kitschy souvenirs and memorabilia that you can take home to remember your visit to the “little tourist trap.

In 2002 the current location was purchased by two guys named Louie Keen and Vernon Brejcha. Keen had run some other businesses on the property before he came up with the idea of opening up a Fudge Factory in 2015 and naming the place Uranus. He is now the self-proclaimed “Mayor of Uranus.” From there he began an aggressive marketing campaign with signs that said things such as “81 Miles to Big Fun in Uranus”, “the Best Fudge Comes From Uranus”, etc. Of course, the name… most of us know the joke. No need to elucidate upon that, especially since the photos of the T-shirts and shot glasses that I provide in this post will give plenty of that kind of fodder for either laughter, eye rolls, guffaws or just the general “ewww.”

As with all Tourist Havens, the signs can be seen for miles before you get there. I think of the best example of this can be seen across the northern highways in the US, pushing the destination known as Wall Drug, which is located in Wall, South Dakota. I have seen signs advertising Wall Drug as far away as eastern Minnesota, and I’ve heard that there may be some even further east in places like Ohio and Pennsylvania.

They actually even include the mileage to the location. Then there are the series of “Tourist Havens“ along the highways in southern New Mexico and Arizona, predominately on Interstate 10 owned by Bowlin Travel Centers of Albuquerque. Their travel centers typically incorporate a Southwestern “Trading Post” theme (not uncommon along Route 66, even in Missouri and Illinois), in the manner of small stores commonly found along Old Route 66 prior to the construction of the Interstate. Many were former independent businesses. They have names like “Flying C Ranch”, “Old West”, “Bowlin’s Running Indian”, and “Continental Divide”. The most iconic of the Bowlin businesses is one known as “The Thing,“ which adds the drawing card of a sideshow within the confines of this business that one must pay for in order to go see. But on the way in you can buy your “The Thing“ shot glasses, mugs, “Kick Ass Peanuts,” and other fine touristy memorabilia.

All of these places are worth a visit, if for anything else, just to catch the theme, see what’s going on, take some fun pictures and have a laugh. They do sell legitimate products, they sell soft drinks, they sell candy and often times things such as homemade popcorn in various flavors, or fudge. Off the top of my head, I can list off more than a dozen of these quirky tourist locations throughout the country. And there are a number of smaller ones that I’ve been to as well. But, there is something special about Uranus and the strip mall of quirky and offbeat shops located therein.

When we pulled off the interstate and then drove along the old Route 66, we could see that this particular tourist attraction covered a couple or 3 acres and had a number of smaller businesses within it, all owned and run by Keen apparently. In the middle of the parking lot is a big water tower that mimics other town water towers – “Uranus, Missouri – Home of the Pirates.” I don’t think I get the joke, but I am sure there is one. Of course, along the way, the signs would say – Uranus, Missouri – not a town, but a destination – or something like that.

As noted above, the main drawing card is the Uranus Fudge Factory. Herein they advertise that the “Best Fudge Comes from Uranus.” You walk in the door and are immediately greeted by smiling staff members (known as Uranus Fudge Packers) who, without any hesitation or embarrassment, yell out “Welcome to Uranus!“ And that is after you have already taken photographs outside with the sign that says “Uranus on Route 66”, and the bland white sign that says “Thank you for Picking Uranus.” Keen actually got an online Chocolatier Certificate so he could begin doing his fudge.

Once inside this rather large shop, your eyes are filled with the eye candy temptations of a tourist trap. There is no doubt about that! All of the “trappings” are there… Numerous T-shirts with sayings about Uranus, the shot glasses, and even a sign above the fudge counter that says “The Best Fudge comes from Uranus.”

After receiving your gracious welcome, your eyes are loaded with the eye candy of the “trappings“ of this shop. The colorful T-shirts with all of their unique sayings about Uranus, the shot glasses, the snacks, souvenirs. They even sell things like Route 66 Root Beer.

As with any “destination” of this sort, there are the cheap little toys for the kids that are bored on their long road trips. There is the candy in abundance and the cold drinks. There is a restroom, and, to my surprise, there was not much written on the door of the restroom or within the restroom, which for a place called Uranus, is a big surprise to me.

The one thing I did notice, is that every tourist that walked through that door was smiling and/or laughing about things within the shop and that is exactly what the owners want you to do because a smile or laugh will likely equivocate into a purchase. And that is why places like this are called a “tourist traps.“

After spending a good deal of time and even a little money for a T-shirt for my granddaughter (yes I used a 20 dollar bill in Uranus), and after numerous photographs were taken, we meandered our way out into the rather large parking lot and drove around to grab shots of some of the other things to be seen. The absolutely funniest attraction was the plywood cut outs. Every tourist trap has some kind of these. You know, the kind where there’s a hole in there for you to stick your head in and get a picture taken! This Uranus version has one of an elephant, as zebra, a giraffe, an antelope and a couple of other animals. Beautifully painted and very realistic looking. The only difference is that these are on the butt end of the animal so when you are sticking your head through the hole, it appears that your head is coming out of the … well, I think you can guess. Just check out the pictures.

According to a couple of recent articles I read about Uranus, Keen expects that there are about 250,000 visitors a year to the place. No wonder Uranus is expanding!!

So, if you are driving to central Missouri on interstate 44 are trying to travel some of the remnants of old route 66, then the trip to Uranus should be included in your planning. Just make sure that you bring enough money because, you would not want to have the paper content of your wallet wiped out in Uranus.

One Reply to “Welcome to Uranus (Missouri) – Really?”