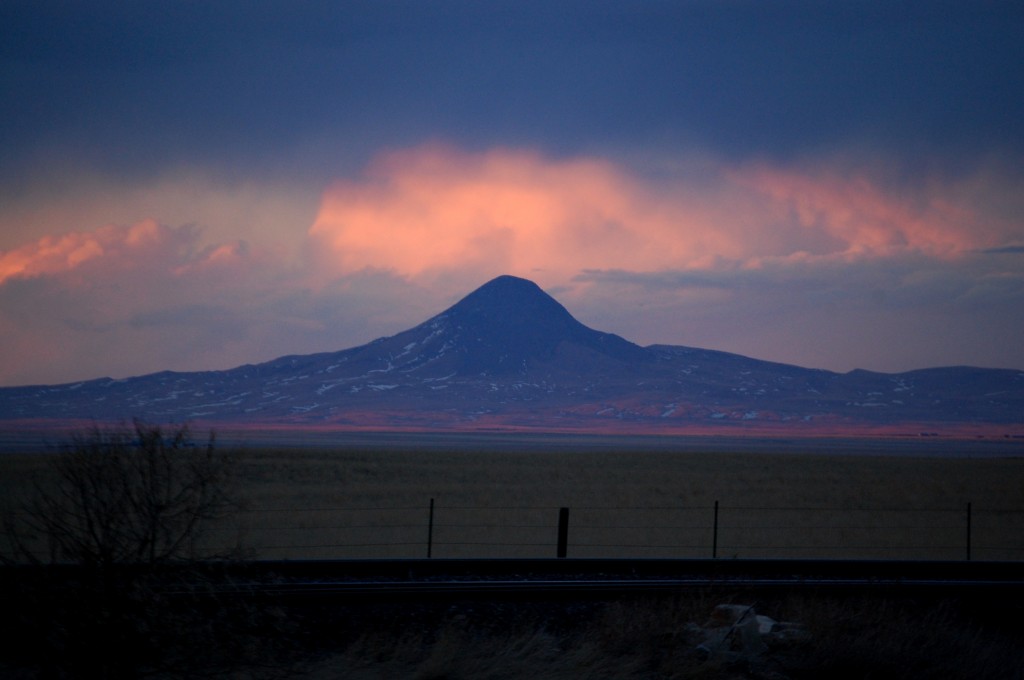 Gold Butte in Northern Montana as seen from Frontier Bar near Shelby, Montana[/caption] Mar. 27, 2013: After almost two weeks in Rexburg working with my new employer DSN America, it was time to return back to Kentucky and home sweet home.  They had flown Julianne out to Idaho, so I was blessed to have my very best friend and sweetheart with me for the long drive home, with a brief stopover in Shelby, Montana to see our daughter and their kids.  It was an easy first day.

We left Rexburg in the afternoon and eventually zipped up I-15.  We crossed over Monida Pass, which serve as the border between Idaho and Montana. The mountains were still snow covered and beautiful, especially as we came close to the Montana border. 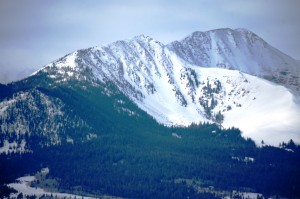 Garfield Mtn (R) and Lima Peaks just south of Lima, Montana[/caption] Lima, Montana is just a small dot on the map and there is not much there.  But, it is really a quite unique place.  There are barely 200 people living in the town at the base of the mountains.  Many of the buildings are really old.  In some respects, the town almost looks like it is a period movie set rather than a real town. The Red River runs nearby the small town.  Lima was originally called Allerdice until a train station for the Utah and Northern was built there.  It was changed to Spring Hill at that time.  It was eventually changed to Lima by Henry Thompson, who named it for his former home in Lima, Wisconsin. [caption id="attachment_2691" align="aligncenter" width="640"] 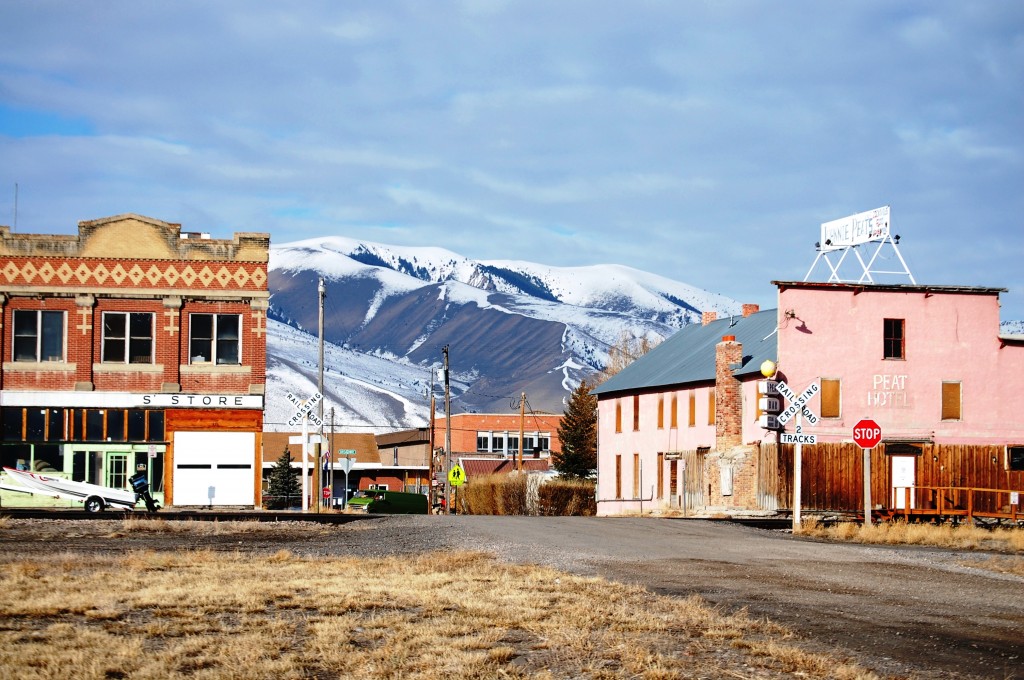 Downtown Lima, Montana[/caption] We drove around the small town, much of which was dirt roads.  There is a woodworker that makes whirly-gigs, a couple of interesting buildings and a unique kitschy store front. [caption id="attachment_2704" align="aligncenter" width="199"] 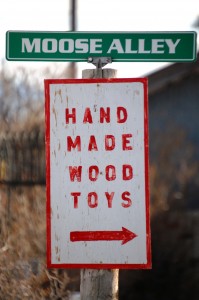 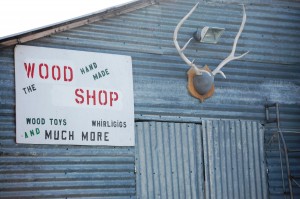 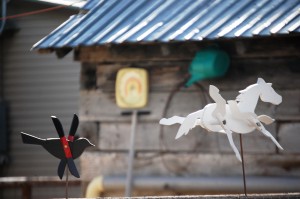 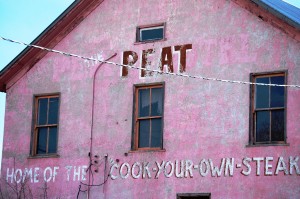 Peat Bar and Hotel in Lima, Montana – Home of the Cook Your Own Steak[/caption] [caption id="attachment_2693" align="aligncenter" width="300"] 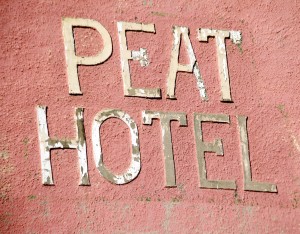 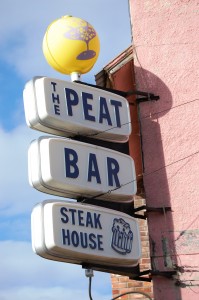 Peat Bar & Steak House[/caption] We also found the Lima Historical Society building, originally built in 1880.  It was originally called the Bailey Building, having been built and resided in by E.A. Bailey and sons, as a Mercantile.  It really did evoke an Old West feel to the place. [caption id="attachment_2703" align="aligncenter" width="300"] 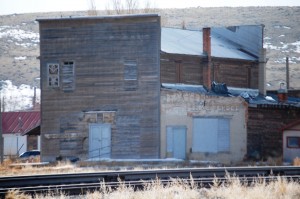 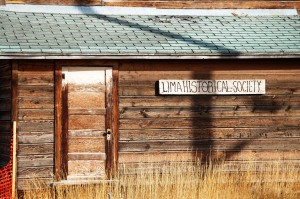 Lima Historical Society[/caption] Perhaps the most interesting place we saw in town was the Wild West Weed Patch, at least that is what I think it is called based on the writing on the Saw Blade sign.  The shop was not open, but there were a number of unique things there.  Still,  I am certainly not sure what it is called.  The closest thing I have ever seen to this kind of hodge podge is Hillybilly Hotdogs in Lesage, West Virginia. (See my Trip Journal of my West Virginia Trip with photos) [caption id="attachment_2722" align="aligncenter" width="640"] 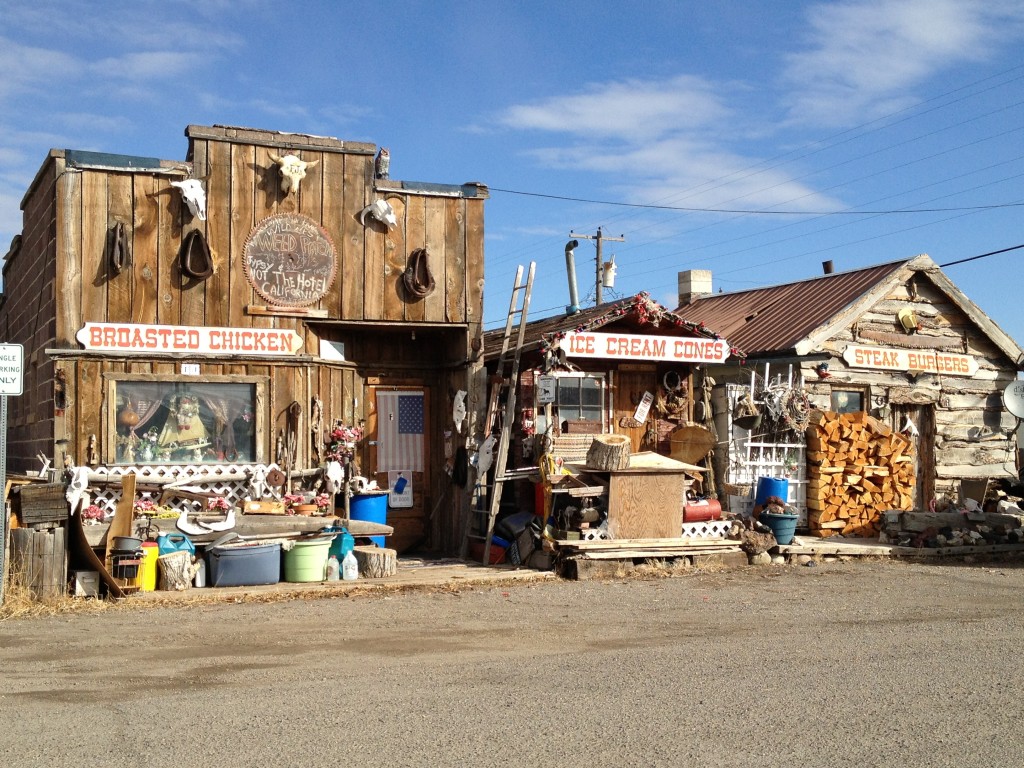 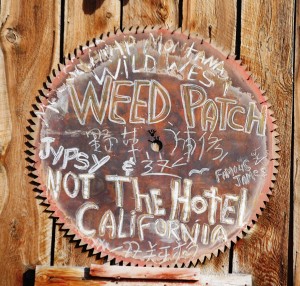 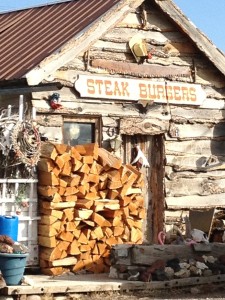 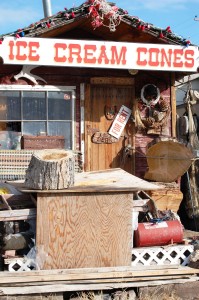 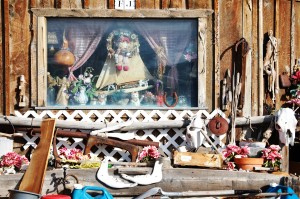 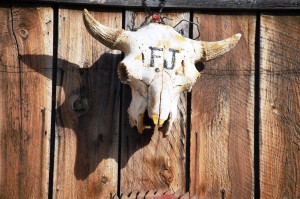 FJ’s Skull?[/caption] After our little diversion in Lima we continued north on I-15 until we got to Red Rock Ranch Rd., south of Dillon.  On my trip down to Rexburg I had passed a ranch with hundreds of buffalo and I wanted a closer look on the way back to Shelby.  So, the night before the trip there I did some research and discovered it was one of Ted Turner’s Buffalo Ranches.  Called Red Rock Ranch, it could kind of be reached by taking Exit 29, north of Dell, Montana.  We went under the freeway and then turned right and almost immediately the road was a dirt road.  We followed it north, but alas, no buffalo to be seen.  So, after almost getting all the way to Clark Canyon Reservoir, we turned around.  Shortly down the road off to my left (the car window was open), I heard some birds squawking.  At first I thought they were geese, but they sounded different.  Then, all of a sudden I saw these two HUGE birds zip on past.  I whipped out the camera and took a bunch of shots hoping that one would reveal the secret.  Here are a couple of the shots of what I realized were Red-Crested Sandhill Cranes.  I had never seen these in the wild so it was a real treat. [caption id="attachment_2712" align="aligncenter" width="640"]

Sandhill Cranes near Red Rock Ranch in Montana[/caption] Such beautiful birds!! Well, we did finally get to see the buffalo, but not until we were continuing north on I-15.  I was determined to get some photos, so we stopped and I took these from my car on the side of the interstate. [caption id="attachment_2715" align="aligncenter" width="300"] 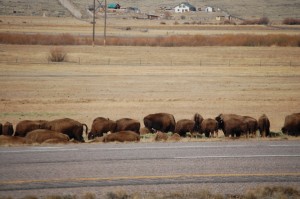 Buffaloes at Red Rock Ranch Rd. in Southern Montana[/caption] Thank goodness for telephoto lenses!! We continued north and made a brief stop in Dillon.  I wanted to just kind of drive through the town and get a glimpse of it.  I had seen in my research that it had a very nice courthouse. [caption id="attachment_2717" align="aligncenter" width="300"] 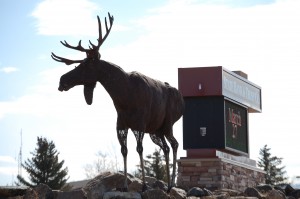 Big Moose Statue in Dillon, Montana[/caption] I saw this moose, to add to my collection, but the lighting was not too good.  It was across the street from the post office. [caption id="attachment_2718" align="aligncenter" width="300"] 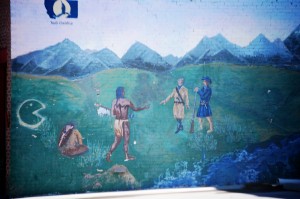 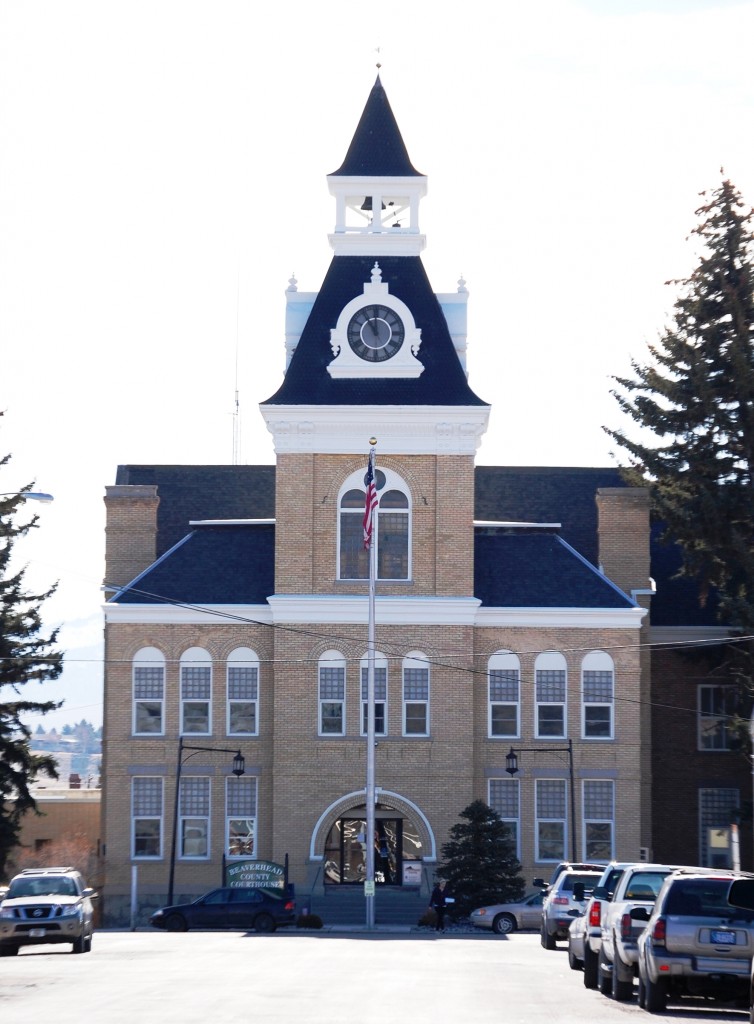 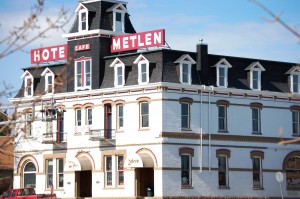 Hotel Metlen in Dillon, Montana[/caption] The courthouse was one of the nice ones such as the ones can be seen in Texas and other places.  But, it was not the only unique building.  The Hotel Metlen was also a nice building. It was built in 1897 and is now apparently up for sale, based on the link above. We then continued north on I-15 towards Butte and made a brief stop for fuel [caption id="attachment_2721" align="aligncenter" width="300"] 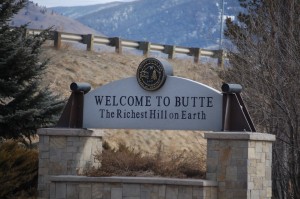 Welcome to Butte[/caption] After Butte we zipped up the interstate through Helena and and then a brief stop in Great Falls to get a birthday present before heading to Shelby.  Saw a nice George Washington statue at the Mall in Great Falls.  Similar to the statues I saw in Jackson, Wyoming done by Gary Lee Price, but I am not sure if it his work. [caption id="attachment_2726" align="aligncenter" width="384"] 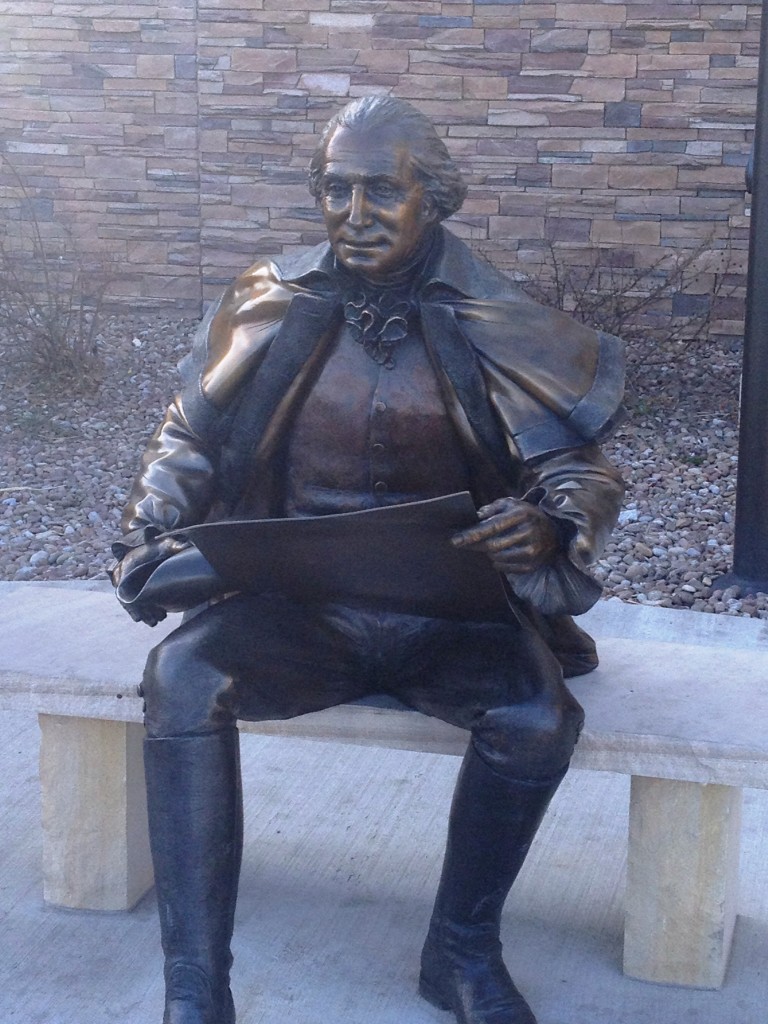 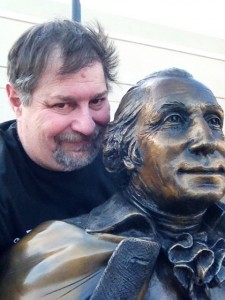 Cuddling with GW[/caption] Finally, we made our way to Shelby to visit the grandchildren.  We spent three nights in Shelby and during that time did a number of things.  These will be noted in the next post.]]>
Barrel House Distillery, Basilica of St. Mary of the Assumption, Cozy Dogs, Craig, D-K Motel, Gregory MI, Lewistown, LexArts, Lexington, Lexington KY, Lexington MO, Lexington Murals Project