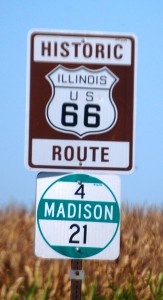 This Post is actually a continuation of my Post on a bigger road trip in the Midwest.  But, due to the nature and value of this place in Americana, I have created a separate post.

Henry’s Ra66it Ranch (the 66 instead of “bb” is intentional) celebrates Route 66 and the people along the highway with its emporium of highway and trucking memorabilia that includes a collection of Campbell’s “Humpin’ to Please” trailers next to a replica of a vintage gas station. 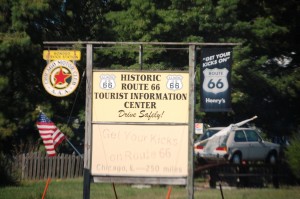 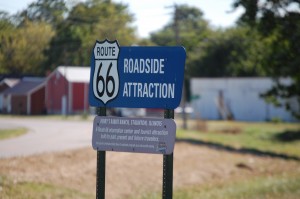 This is one of those vintage Americana places, even though it has not been around for much more than 10-15 years. Rich Henry and his wife Linda have built up a shop chock full of Route 66 memorabilia, a collection of old VW Rabbits outside, a version of “Cadillac Ranch” (thus Rabbit Ranch….) and even a pen full of live rabbits. 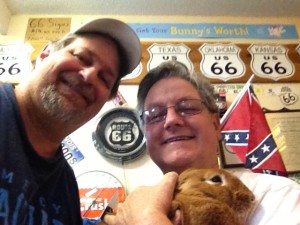 Rich Henry and Sumoflam with the Henrys’ rabbit at Henry’s Ra66it Ranch in Staunton, IL

Rich Henry has also adopted the famous Jack Rabbit logo that can be found at the Jack Rabbit Trading Post in Joseph City, Arizona. I recall even as a young kid seeing these signs on Route 66 in Arizona and New Mexico. 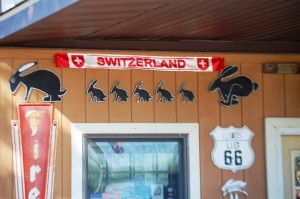 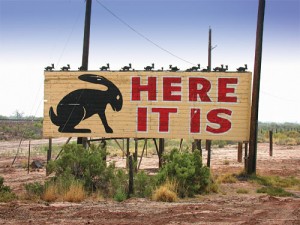 Route 66 “Here It Is” Rabbit sign near Joseph City, AZ 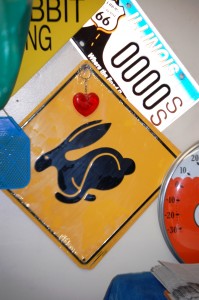 Of course, you gotta have the old cars stacked together. Unlike the famed Cadillac Ranch (see my post) and its colorfully spray painted Cadillacs, Henry has 7 half-buried cars in the ground (and only one of them is a VW Rabbit I believe) and none are spray painted. 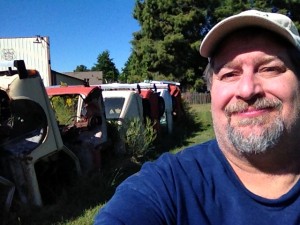 Sumoflam with buried cars at Ra66it Ranch in Staunton, IL 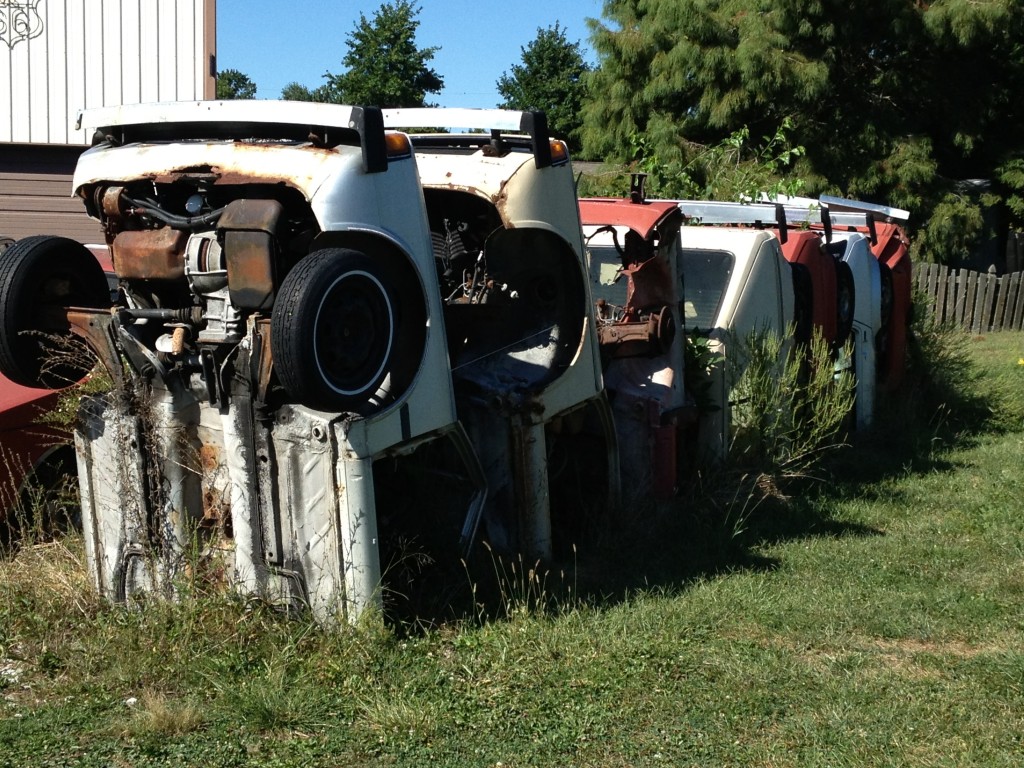 Of course, he does have a few “Rabbits” around the place: 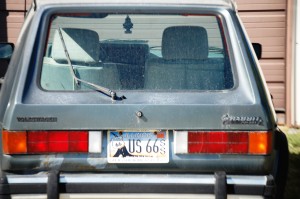 VW Rabbit with US 66 License Plate 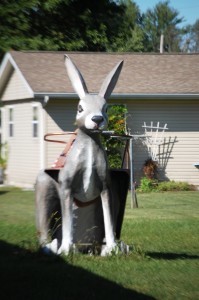 Big Rabbit for kids to climb on 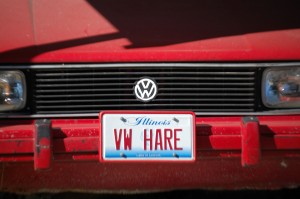 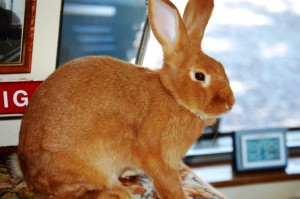 One of Rich Henry’s LIVE Rabbits

Then there are Rich Henry’s dedications to the “Cars” movie by Disney Pictures: 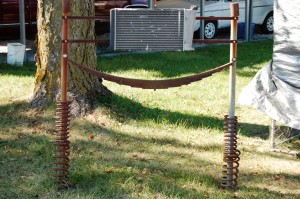 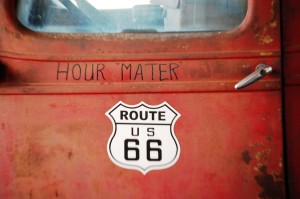 “Tow Mater” is the name of the fictional truck in the “Cars” movies. Mater is a friendly old Checy tow truck with buckteeth. He speaks with a thick Southern accent with a dash of hillbilly twang and frequently uses incorrect syntax. 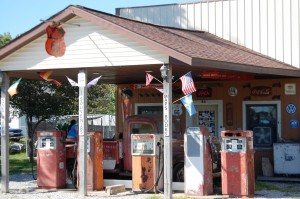 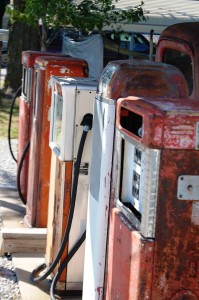 Lots of goodies inside the store as well…. 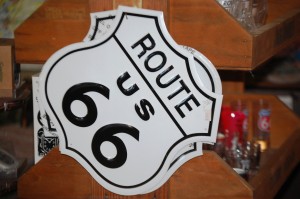 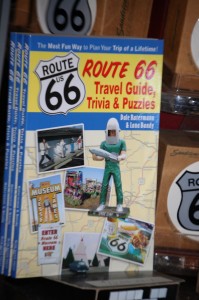 Plenty of Route 66 Maps and Guides at Ra66it Ranch 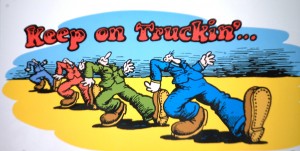 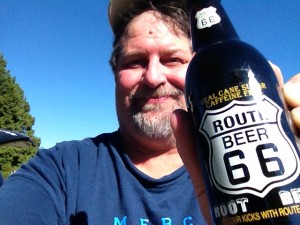 While stopped at Ra66it Ranch, make sure to get an ice cold, caffeine free, made with can sugar “Route Beer 66.” This is one of a line of the Route 66 Sodas out of Lebanon, MO. 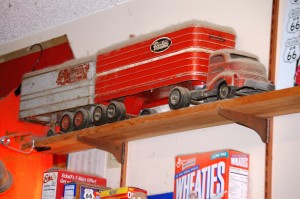 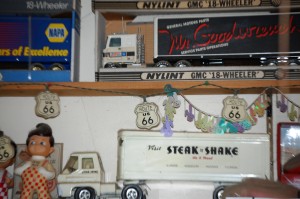 Outdoors there are more Americana-esque pieces including an old Neon Sign and some truck trailers with “Humpin’ to Please” on them. 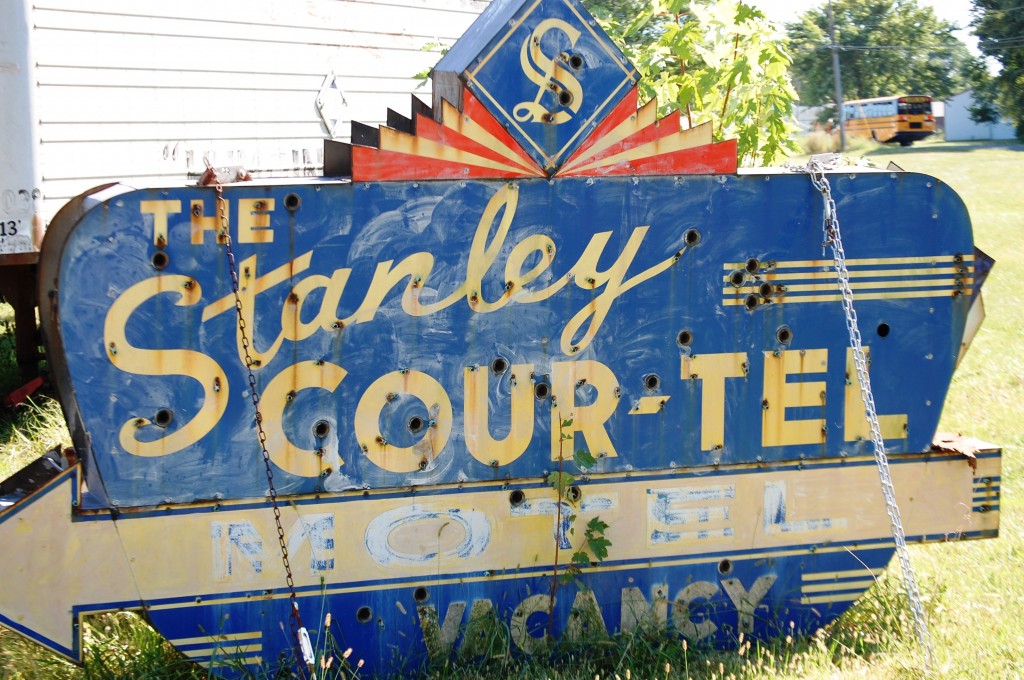 The sign from the former Stanley Cour-Tel was moved to Ra66it Ranch in 2004.  Originally located on Route 66 near the Lambert International Airport in St. Louis, the hotel was slated for demolition for airport expansion.  Also saved was the sign for the Lin-Air Motel, but I didn’t see that at Ra66it Ranch. 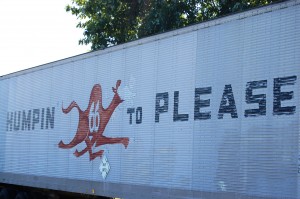 Campbell 66 Express was a freight company that was headquartered in Springfield, MO for many years.  It eventually went bankrupt in 1986. Campbell’s Trucking became Campbell’s “66” Express with the purchase of 66 Rapid Express in the early 1930’s. The original routes were from Springfield to St. Louis, Missouri on Highway 66. For more than 65 years “Snortin’ Nortin,” the Hand Painted Camel on the trailers, epitomized Route 66 in the heartland. 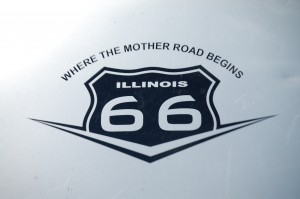 Illinois 66 – Where the Mother Road Begins

If you plan on a Route 66 trip in Illinois, then Henry’s Ra66it Ranch is a must stop!!