It’s another year and another opportunity to provide a fun VIRTUAL road trip.  For the 2022 A to Z  Challenge, I will be taking you, the readers, to some of the many places I have visited.  Almost every little town to every big city has something unique to offer visitors. I hope to take you to some of these places across the United States, and even to Canada, the Philippines and Japan on some select posts, for a virtual trip to see places you may not know about.

Today’s post covers a number of towns and cities that begin with the letter A. Some are huge cities and some are barely dots on the maps.  I hope you’ll enjoy this trip.  Ironically, on this April 1, I am visiting Anderson, Indiana for the Grand Opening of the Uranus Fudge Factory #2 where I will be doing a book signing.  You’ll see more near the end of April on the U post!!

I want to start with Albuquerque because the last entry of this month’s challenge will be a Z town that is a suburb of Albuquerque!

I spent my formative years (from 6 months old to 9 years old) in Albuquerque, so it was my first “home” and will always have a place in my heart.  There is so much to do in this large city in the New Mexico high desert.

The city is a major stop on the old US Route 66 and has a number of draws.  But I want to share just one must see and must do spot.  That Sandia Tramway that takes you to the top of the Sandia Mountains.  What an amazing adventure.

Speaking of Albuquerque, clear back in 2005 I was able to make a 6 week visit to Cebu in the Philippines.  On one of the trips we visited the small island of Bohol.  Just southeast of the port town of Tagbilaran is the small town of Alburquerque.  I stopped at a shop to get a shot of the store front sign there. 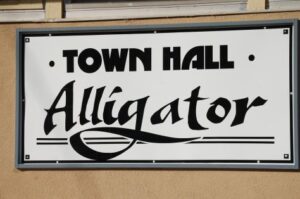 Next stop is in Mississippi, right along the river on one side and the Blues Highway (US Route 61) on the other.  There is a small town famous for its name and for the blues!!

I believe it is the only town named Alligator in the United States.  Sadly, the only Alligator I saw was a large mural in the small town, which has a few other murals and even has a juke joint.

We’ll next head north to the town of Arco, Idaho, which gained fame from Atomic generation.  The town hall is made of rock and is a cool little building.

There is a unique diner there called Pickle’s Place.  It is home of the “Atomic Burger.” YUM! 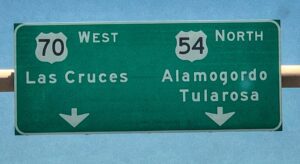 Alamogordo is located close to White Sands National Monument, but has its own unique stuff.  The World’s Largest Pistachio stands proudly in town at McGinn’s Pistachio Tree Ranch.

A good deal of America’s pistachios come from this part of the country.  And you thought New Mexico was only famous for chiles!! 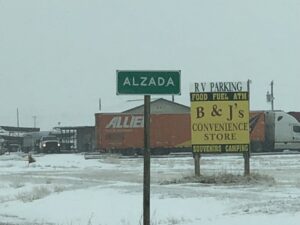 Alzada, Montana is just a small spot on the map.  It sits in the southeast corner of Montana on US Highway 212 and is a popular spot for bikers.  Why?  Because of the Stoneville Saloon, which is famous for its Cheap Drinks and Lousy Food.

Back in 2005 we stopped at the Stoneville Saloon, which turned out to be a famous biker bar.  The owners, full of tattoos, were very friendly and served up some of their very tasty “lousy food.”  We enjoyed it.

On a trip to visit my daughter in Washington back in 2019, I made my way home down US 101 and passed through the small community of Allyn, Washington.  Much to my surprise, this small town had some BIG stuff.  In fact, there was lots of bigfoot and big bear wood carvings.

According to my friends at Roadside America, Bear in a Box has the World’s Largest Collection of Wood Carvings.  (See their article here).  I got there early so only had the opportunity to get out and see some of their hug bigfoot carvings!  How fun it was.

The town of Adair, Iowa is basically a stop off of Interstate 80 for gas and is in the middle of massive cornfields and windfarms.  But I love this place because of their bright yellow smiley water tower!

Next time you are driving on I-80 in Iowa, watch for it.  It will make you smile!

This lovely little town is in the far northwestern corner of Oregon, just across the Columbia River from Washington.  The town has many attractions, including Astoria-Megler Bridge on US 101. It is the longest continuous truss bridge in North America!  Also, just off the bridge as you enter Astoria, you can get a glimpse of one of Peter Toth’s many “Whispering Giant” Native  American carvings that dot the U.S.

As you come down off of Kentucky’s Black Mountain, the highest point in Kentucky, into Virginia, you come to the community of Appalachia, Virginia.  This community of about 1700 people doesn’t off much.  But I loved the sign.  Look carefully.

Anaconda is an old smelting town in Montana.  It has a couple of large smokestacks.  But it also sits in the foothills of some lovely mountains and has a great mural. 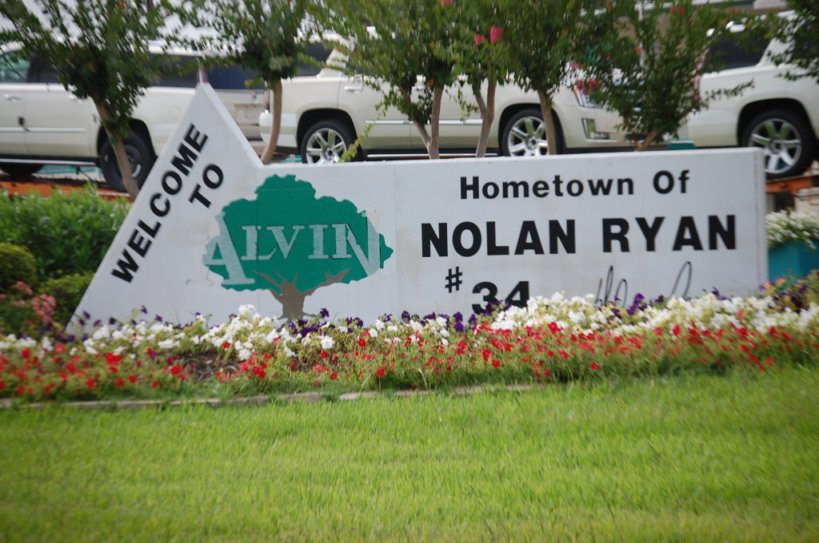 You’d never think that a town named Alvin would be the home to someone famous.  But, one of Major League Baseball’s most famous baseball stars was born here.  This was the home of Nolan Ryan and they have a nice statue and sign to prove it.

Austin is home to one of Hormel’s largest meat packing plants and is especially famous for its canned meat product, more commonly known as SPAM.  It is home to the SPAM Museum.

There are all sorts of opportunities to get SPAM in town.  One cafe even specializes in SPAM dishes on their menu. 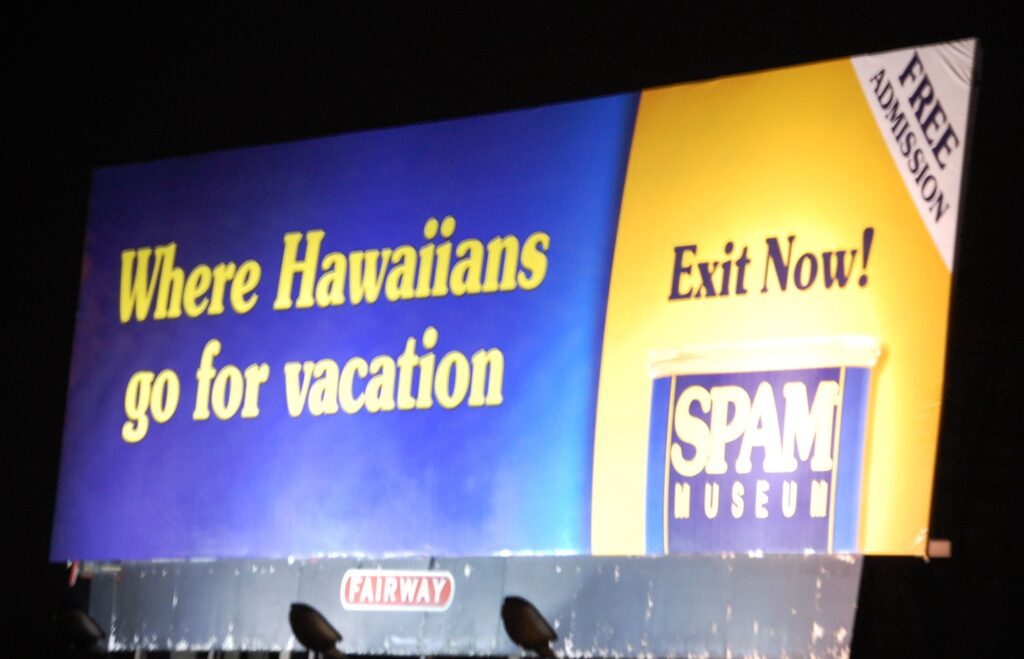 Alma, Arkansas is home to the Popeye Spinach Company and, as such, has a nice Popeye Statue in town.

I love the town of Alliance.  It is really famous for two things — The Knight Museum and Sandhill Center and an even more well known attraction known as Carhenge.

I worked in Canada for eight months and made many trips.  One of the more interesting places was in Aylmer, where swans migrate.  Want to see hundreds of swans in one place?  This is it!

I am going to close out the A section with the quirky and lovely town of Austin, Texas.  There is so much in Austin that I could dedicate a couple of posts.  But, I’m going to include a couple of favorites.  The Austin mural is world famous.  However, the Voodoo Doughnut place on Sixth Street is not as famous as its mother store in Portland, Oregon.

12 thoughts on “Towns of America A to Z: The A Towns #atozchallenge”