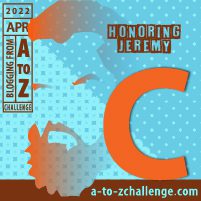 It’s another year and another opportunity to provide a fun VIRTUAL road trip.  For the 2022 A to Z  Challenge, I will be taking you, the readers, to some of the many places I have visited.  Almost every little town to every big city has something unique to offer visitors. I hope to take you to some of these places across the United States, and even to Canada, the Philippines and Japan on some select posts, for a virtual trip to see places you may not know about.

I really need to kick it off with one of the best places in the U.S. to visit in a town starting with C.  Make your way to Calvert City, Kentucky, a small community along the Tennessee River a few miles east of Paducah, Kentucky. Here you will find the ultimate Hillbilly Artist and collector, Keith Holt, at his wacky and whimsical Apple Valley Hillbilly Garden and Toyland.  In 2005, Keith moved to Kentucky from Hollywood after a 20 year career as an actor, standup comic, puppeteer and circus clown. He settled on his Grandparent’s homestead with two truckloads of toys. Since then he has created an amazing junk-art Hillbilly Garden and provides tours to all who visit.  Beware, however, as Keith may PUN-ish you with his amazingly fun stories of the garden.

If you make a visit to the Badlands National Park in South Dakota, make sure to head out the North Entrance (or come in that way) via Cactus Flat, which is accessible just off of Interstate 90 at exit 131. There are gift shops and gas stations, but there is also the World’s Largest Prairie Dog and a huge prairie dog community.  The prairie dogs are a playful bunch, so bring the camera!!

Prairie dogs are a part of the squirrel family. They stand about 14-17 inches tall and weigh between 1-3 pounds. There are many different species, but the black-tailed prairie dog is the most common, and the type that is found in Badlands National Park and other areas of South Dakota. They live in small towns underground that have multiple entrances for ease of escape from predators.

Council Bluffs is an old railroad town just across the Missouri River from Nebraska and it includes a nice Union Pacific Railroad Museum, a casino and many other amenities.  It is home to the Golden Spike statue where the east and west railroads were completed.  But, for this visit, you need to make it over to the Mid-America Center which features a number of sculptures, including a couple that are very tall. One of my favorite large metal sculptures in the country is here….  Its a 2007 sculpture titled “Sunrise,” by American artist William King.  It stands well over 40 feet tall and represents the pioneer spirit.  The other one is title “Molecule Man” and was created by Jonathan Borofsky, whose giant statues can be found in many cities across the world. This one is about 50 feet tall and weighs 16.5 tons. There are 1216 “holes” in this sculpture to refer to the molecules of all human beings.

Cut Bank is a nice little city that borders the Cut Bank Creek.  It is considered one of the gateway towns to Glacier National Park.  As touristy town, one can find all sorts of shops and interesting murals.  Perhaps the best and most fun attraction is the 27 foot tall concrete penguin with a sign declaring Cut Bank to be the “Coldest Spot in the Nation” (which it isn’t really).  There is plenty of Lewis and Clark history to be found here as well.

My third child (and daughter) is named Chelsea and in my travels I have passed through three places named Chelsea.  I am featuring two of them here in this post.  The first is the Route 66 town of Chelsea, Oklahoma. Chelsea was established in 1902 in what was then the Cherokee Nation Territory. It was a major hub for the petroleum industry as early as the first decade of the 1900s.   In later years it became a Route 66 town.

Chelsea, Michigan was a stop for me after I visited Hell, Michigan.  The town has some lovely architecture and many historic buildings. It has a similar population to Chelsea, Oklahoma.  For me, the main attraction was the Chelsea Teddy Bear Company. While there, I also discovered that Chelsea is the home to the Jiffy Corn Meal Muffin plant.

A visit to Chelsea, Michigan could turn into an all day affair if you are interested in shopping and history.  There are other cool places nearby, including a trip to Hell, Michigan, if you wish.

Cave City is another town associated with a National Park.  In this case it is Mammoth Cave National Park. That said, there are gift shops, rock shops, all sorts of cave tours, many neon-signed motels from the 1960s and 1970s and more.  Certainly it all appeals to the visitors to the cave.  But, one of the most fascinating places is the Wigwam Village Motel (#2), which has been around since 1937 and is still in operation!! I know this because in July 2017 my family all stayed in five of the “wigwams.”  Yes, five children, spouses and ten grandchildren.  Not luxurious, but I promise it was a memorable experience for them and will be for anyone else who stays there.  I would recommend that you try it.  Its not uncomfortable, but it is old.

We’ll now head back to South Dakota and another great stop off of Interstate 90. Located on the eastern bank of the Missouri River, this town of about 2400 is down in a nice valley. Coming from the east, you’ll climb up the hill to a huge rest area that overlooks the river valley below.  The view is wonderful, but, the rest area also offers a magnificent, and once again, giant, piece of art. Known as “Dignity: of Earth & Sky,” it is yet another towering 50 foot tall stainless statue created by South Dakota artist Dale Claude Lamphere.   It depicts a plains Native American with a Star Quilt.  According to the artist, “Dignity represents the courage, perseverance and wisdom of the Lakota and Dakota culture in South Dakota.”  He hoped that the sculpture might serve as a symbol respect and promise for the future.  Honestly, this is a magnificent piece of art.

In the Philippines, one can go “Island Hopping” from Cebu. We visited a few islands, including a small island called Caohagan, which maybe had 60-100 residents. I took one of my all-time favorite pictures of a little girl there. We had to ride a small catamaran boat to get from our big boat to the island.

In all of my years of travel, I have only been to Maine once, but I made sure I got to one of the famed sites there.  While near Portland, Maine, we visited Cape Elizabeth to see (and experience) the lovely and fairly famous Portland Head Light and Fort Williams Park.  Thousands and thousands of folks, including me, have photographed this spot.  The waves crash over the quartzite rocks.  The view of the light house across Casco Bay and Portland Harbor is amazing. In 1790 a lighthouse was initially erected in this area and was 72 feet tall.  It has been rebuilt, refurbished and stands about 92 feet tall.

My wife’s sister currently lives in the Canonsburg area, so we have visited numerous times. Canonsburg prides itself on music and the famous musicians that have come from this town a few miles south of Pittsburgh. Canonsburg is proud to honor two famed musician/singers including Perry Como and Bobby Vinton.  Perry Como is featured in a nice statue by City Hall.  And, in a real twist, the McDonald’s restaurant in town has a small museum with busts of both Como and Vinton.

There are so many more I could offer up, but I’ll save them for another time.

6 thoughts on “Towns of America A to Z: The C Towns #atozchallenge”