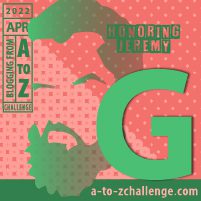 Golly Gee Willikers another A to Z post.  Today I post about places that begin with the letter G. As with all of my posts, I have been to all of these places and all of the photography is mine as well.  I never write about places I haven’t personally visited. I’ll start out with something Goode, but then who knows where the trip will take us??

There will be stuff to gnaw on and I am sure we may even discover gold along the way!

Do you like to look for Muffler Men and Uniroyal Gals?  Well, a quick drive by Gainesville will get you a chance for some major selfies with the big guys and gals!! Glenn Goode has a number of them on display.  Fun fun!

Gallup is a main stop on New Mexico’s section of Route 66.  Lots of old stuff here…old motels, old neon signs and other Route 66 fun.  It is also on the Navajo Reservation so there are plenty of Navajo tourist shops as well as plenty of good food.

Gallup does like to exclaim that they are the “Most Patriotic Small Town in America,” but I am not sure how they came about that.  I have seen plenty of patriotic small towns across our great country.

While on the subject of Route 66 and New Mexico, how about a visit to Grants, New Mexico, just down the road from Gallup actually.  Grants is only 78miles west of Albuquerque and has a population of just over 9,000. It is located along the Trails of the Ancients Byway, one of New Mexico’s scenic byways.  Unlike Gallup, which is on the desert, Grants sits at 6,460 feet elevation.

The highlight of Grants is the big Drive-thru Route 66 sign, which I took full advantage of.

Let’s face it…Green Bay, Wisconsin is a DIE HARD football town.  It is probably one of the smallest cities to be home to a football team and these fans love their Packers!  Everything is football!

Gothenburg is famous for the Pony Express in Nebraska.  It got its start on April 3, 1860 in St. Joseph, Missouri,  and one of the way stations for the riders was located  in Gothenburg. When Stage Coaches got rolling, it then became the Overland Trail Stage Station from 1862 to 1931.  There is also plenty of pioneer heritage in the town and much can be seen at the Sod House Museum.

Gardiner, Montana is located at the northern entrance of Yellowstone National Park.  You go through the massive and historic Roosevelt Arch at this entrance.

Let’s head down to one of the southern gateways of Yellowstone.  Gillette, Wyoming was incorporated in 1892 and is considered the “Energy Capital of the Nation” because of the high grade coal reserves nearby as well as nearly 13,000 oil wells.  As a draw to their town, they have really focused on the visual art with murals and sculptures around town.

Oregon’s US Highway 101 is a lovely drive and a stop at Gold Beach is a must!!  The views are amazing.  The Pacific Ocean is grand and there are many rocks.  Its a great place!!

Unlike Gold Beach in Oregon, Gold Bar is set in the middle of the beautiful Cascade Mountains.  A lovely drive.

And now for a few other quickies for fun

An old ghost town now, there is still the fun neon sign as seen from US Highway 2

Yes, there is a place called Gnaw Bone and I wished I had BBQ ribs instead of finger to gnaw on.

I am going to finish off with a fun couple of sites in Guthrie, Kentucky

2 thoughts on “Towns of America A to Z: The G Towns #atozchallenge”