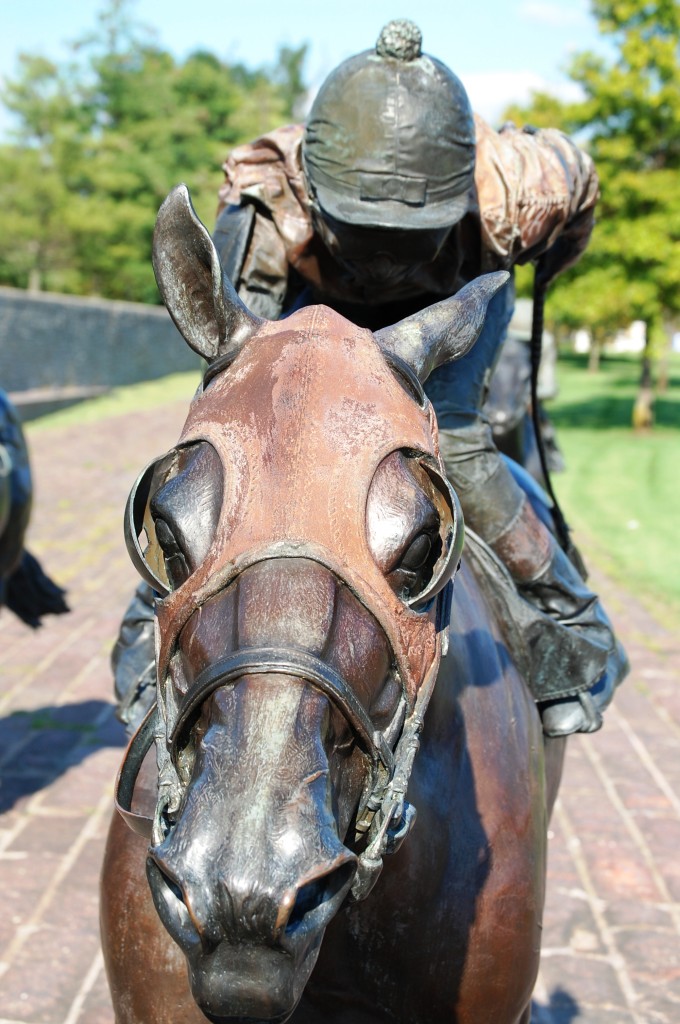 We have lived in Central Kentucky for just over 20 years.  The Lexington area is known as the Horse Capital of the World, and for good reason, the area is noted for its limestone enriched fertile soil, its excellent pastureland and the perfect place for bluegrass to grow.  The area is known for its scenic beauty and  manicured landscapes.  Sometimes one needs only go into their own backyard to enjoy the ride..  Following are a few “Horse Photos” that I have taken around Central Kentucky, some scenic, but mainly horse art that I come across.

With hundreds of horse farms in the area supporting it, Thoroughbred Racing is a huge industry in Central Kentucky.  But there are many other events that occur here as well, especially with the world famous Kentucky Horse Park.

Along with the horse activities are the expansive horse farms with their signature black plank fences and their massive horse barns.

With so much involved around horses in Central Kentucky, it is no wonder that there is an abundance of horse art to be found in the area.  There are numerous paintings and murals and dozens of horse statues dotting the region.  Here is just a smattering of what I have come across in my travels around Lexington and the surrounding area.

As a side note on the above two photos of Morgan and Castleman.  These are both on the National Register of Historic Places and are the only two Civil War Monuments in Kentucky with equestrians.

Perhaps the shining monument of horse art in Lexington (and Central Kentucky) is Thoroughbred Park. This 2.5 acre park, with its fountains and benches and walking paths offers a splendid retreat.  It also provides a unique history of the thoroughbred. The park contains 42 plaques honoring historic figures in the thoroughbred industry, and has 13 life-sized horse sculptures, including the seven horses storming down a track towards the finish line of a race.  All of the horse art in this park was done by Lexington artist Gwen Reardon. Following are a few scenes from the park.

In July 2010, LexArts, a community organization dedicated to the promotion of art in Lexington, created a fund raising project called Horse Mania 2010, which featured 82  painted fiberglass horses that dotted the streets of Lexington. Since that time, many of these were purchased and added to private collections in Kentucky and elsewhere, but some are still visible on the streets of the city. The complete set can be seen HERE and all are clickable to see the whole story behind each one.  Following are a few that I have captured over the past three years.

Obviously, there is much more art to be found.  The Kentucky Horse Park has a dozen or more outdoor sculptures, photos of which can be seen here.  There are also more to be found in surrounding towns such as Paris, Versailles, Cynthiana, Richmond, Danville and more.  Its a great place to visit and an even better place to live!! 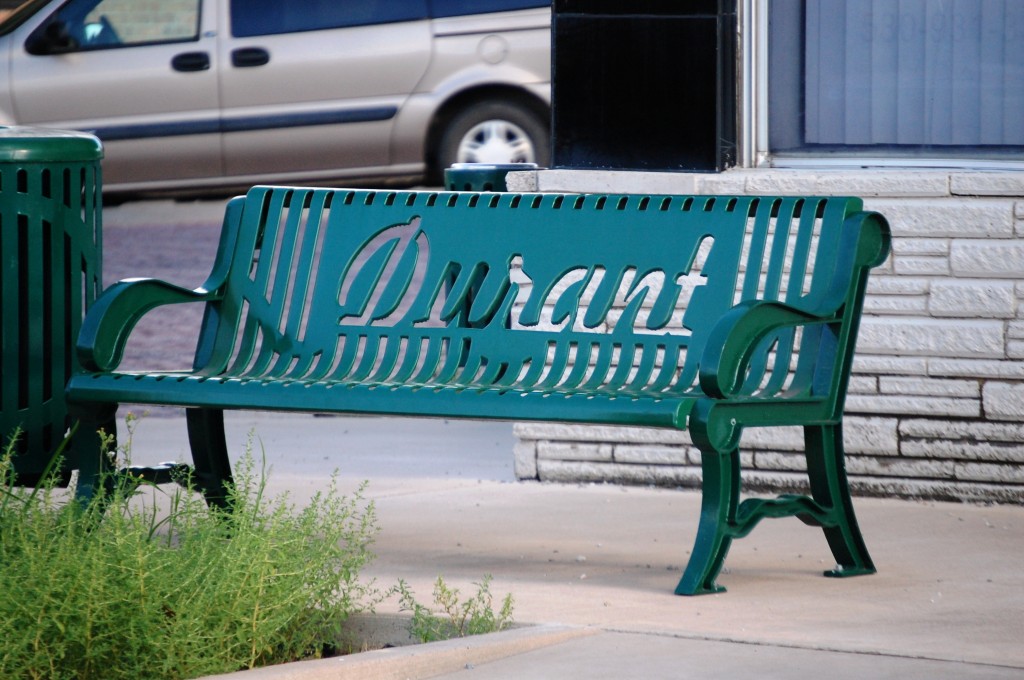 After being gone for nearly a month in Idaho and then a few days in Dallas for work in mid June (2013), I took the final leg of this adventure and a two day trip to return home to Lexington via Branson, Missouri, where my wife was visiting with her sister.  This would turn out to be another fun adventure as I traveled through Oklahoma and the Ozarks.  Following is the route I took for the trip.  I left in the afternoon and arrived about midnight in Branson.

I headed straight up US 75 to Denison and while there at least got a glimpse of the HUGE Eisenhower statue that can be seen off of the freeway.  I took a photo of it while driving by, so it is not as good as I would have hoped.

I continued north on US 75 until it turned into US 69 as I crossed into Oklahoma and made my way into Durant, Oklahoma. Durant is one of those unique small towns that brings me so much enjoyment in travel.

Durant is in the Choctaw Nation and is currently ranked as one of the fastest growing cities in the United States.  It is in a very nice area near lakes and rolling hills.  There are colorful horses dotting the town and some other surprises as well!!

Turns out that Durant, Oklahoma is also home to the “World’s Largest Peanut”, a title it shares with two other monuments in Texas and Ashburn, Georgia. This monument is for the peanut growers in Bryan County and I found it on the front lawn of Durant’s city hall.

Finally, on the way out of town I ran into these unique scrap metal horses in a park in Durant. These appear to be the handiwork of South Dakota “found metal sculptor” Doug Owen.

From Durant I headed north on US 69/75 through a number of small towns until I got to Atoka, Oklahoma.

Atoka, Oklahoma is a town of a little over 3000 people.  It was settled in the mid-1800s and was an important stop on the Butterfield Overland Stage Road.  The small town was considered the capital of the Choctaw Nation in the late 1800s and was named after Captain Atoka who led his people here during the “Trail of Tears” in the 1830s.

Due to my time constraints, I didn’t have a lot of time to stop along the road on this trip, but I did make my way past the beautiful Atoka Reservoir and into McAlester, Oklahoma.

Upon arrival in McAlester I got to see a throwback to the 1950s…at the Happy Days Hotel there are 50s themed rooms including the “Elvis Suite,” “I Love Lucy,” James Dean and Marilyn Monroe rooms at the hotel.

Angel’s Diner has the black and white checkerboard floors, diner seating and more.  I wish I would have had time to stop in…..but I had to continue on to Branson

One of the more spectacular sights along the drive north on US 69 is the huge Eufaula Lake, with over 600 miles of shoreline, it is the largest lake in Oklahoma.   It was beautiful as I approached close to sunset.

Shortly after passing by the lake I arrived in Checotah, Oklahoma and then headed west on Interstate 40.  It was getting dark, so I zipped my way on to Branson, Missouri through Arkansas.  Sorry…too dark for photos…

The next morning my wife and I took two cars and drive back from Branson to Lexington, Kentucky.  We had to get back, so we didn’t have much time to see anything in Branson.  I did get a photo of a huge guitar sticking out of a building….

Our route from Branson to Lexington was not a direct route as I wanted to take my wife by Lambert’s Cafe in Sikeston, MO for lunch, as you will see later on.  Here is our nearly 600 mile route for Day 2:

The drive across southern Missouri is always nicer OFF of the freeways.  I had been on US 60 between Branson and Sikeston three or four times.  But, of course, there are always interesting things to see along the way.

Gotta love a name like Uncle Rooster’s!!  They even have a giant rooster out front….

From Seymour, the countryside becomes mainly farmland until about Mountain View and Cabool.  We saw thousands of rolled bales of hay and other nice rural scenery along the way.

We stopped in Mountain View, Missouri for a quick rest break and a drink.  While there, lo and behold, I saw some scrap metal horse sculptures that looked amazingly similar to the ones I had seen in Durant, Oklahoma the day before.  I believe they are the work of South Dakota artist Doug Owen.

From Mountain View we proceeded eastward on US Route 60.  Here are a couple more scenes from the road:

Not soon after seeing the aerial acrobatics of the plane above, we made our way into Sikeston, Missouri.  Sikeston is at a major junction of US 60 from the west, Interstate 55 (N-S thru Sikeston) and Interstate 57 from the east.  But for me, the real highlight was being able to once again visit Lambert’s Cafe.  I had been to the one in Ozark, Missouri a number of years ago, but never to this one.

Lambert’s is one of those places that buses full of tourists stop at, highway drivers stop and more.  All sorts of Kitsch with license plates everywhere, old photos and, most importantly – good food and LOTS of it.  But, perhaps the real drawing card is the “Throwed Rolls”, a tradition at these stops since the beginning.

To get a roll you must raise your hand and they throw it to you.  You miss and hits the floor….too bad!

Sometimes the roll throwers do miss.  We saw some up on the overhangs…

The unique thing about this place is the Family Style servings.  You order your food and a side and then they bring you a number of other sides – fried potatoes, fried okra, macaroni and tomatoes, black-eyed peas and more.  These are as much as you care to eat.

The environment there is fun as well….

After a hefty lunch, we really wanted a nap, but we actually had to scoot onwards towards home.  Just a short zip up I-57 and we were in Cairo, Illinois where the Ohio and Mississippi Rivers meet for one of the biggest confluences in the country.  There are two big bridges to cross at this point.

One moment you are in Missouri, a few minutes later you go through Illinois and straight into Kentucky.

After driving the narrow KY Hwy 286 to Paducah, we were excited to get on the freeway, but, I got a taste of Dallas in rural Kentucky as we were stuck in non-moving freeway traffic for well over 30 minutes.

But, after it all cleared up, we were on I-69 breezing away and then eventually onto the Bluegrass Parkway.

And, finally, back home in Kentucky after being away and on the road for over 5500 miles, 33 days and driving through 15 different states during that time.