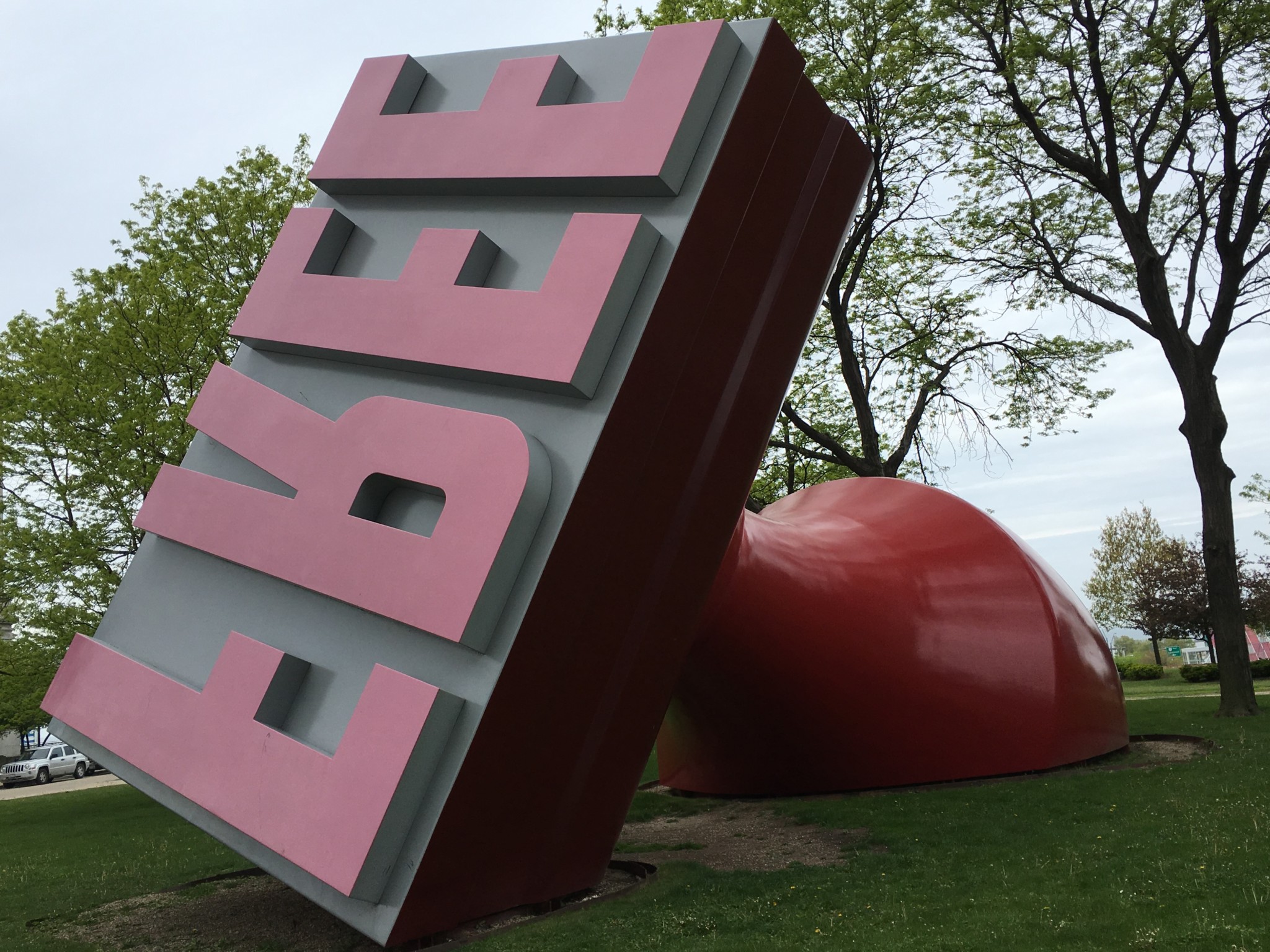 I recently made a trip up to Cleveland to visit family in Little Italy (see the post about the Little Italy neighborhood HERE).  While there, I got to spend a day with my sister and her husband visiting sites in and around Cleveland as well as a few small treks on my own.  With the challenge of only a couple of days, I made it a point to visit some of the quirky and offbeat sites as well as a couple of historic things.  We saw a good deal of Cleveland and also visited the Kirtland area, which will be added to a different post.

I started off one of my mornings by going to Lake Erie at Kenneth J. Sims Park in Euclid, which is right on the lake and offers some nice views.  It is also home to the Henn Mansion Historical Site.  and getting some marvelous photos of the sunrise over the lake and saw some geese and a blue heron. Those that follow my blogs and Facebook posts know that I love nature as much as I like traveling and seeing quirky sites.

I next made my way into Cleveland to go visit the “birthplace” of Superman. In the 1930s, teenagers Jerry Siegel and Joe Shuster, both of whom went to the same Glenville High School and both had the same love of science fiction stories, either as novels or comic strips, and even lived only a couple of blocks apart, created a comic book hero named Superman. Siegel ended up writing the original stories and then Shuster would put them into comic book form. (See a more complete story about these two HERE.)

Nowadays, the neighborhood is actually kind of a scary part of Cleveland. It has suffered a great amount of urban decay as some of these photos below indicate. But the neighborhood and the street that Superman memorial is on, is generally well-kept. It is a predominantly African-American neighborhood now and the people in this neighborhood take good care of their homes despite the age of the buildings.

Both the house that Superman was “born” in and then Joe Shuster’s house as well have a big superman S on the front of the fence along with a big plaque commemorating the history of Superman and the stories of Jerry and Joe. Obviously, when you think about Metropolis for Superman, or Gotham City for Batman, the cities are old and dark much like New York, Chicago or even cities like Cleveland and Pittsburgh.

I got a chuckle out of the street names for both the street that Superman “the story” was created (Kimberley) and then Superman “the comic book character” (Amor) was drawn. In both cases they have street signs with the original names of the artists. And both streets come off of Parkwood, also known as “Lois Lane.” 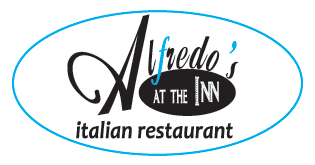 After my visit to the Superman sites, I joined much of my Laurienzo family for a big breakfast at a place called Alfredo’s at the Inn in Mayfield Village.   Though known for their Italian Cuisine in the evenings, they also have a nice breakfast menu and buffet.  It is really a good place for big groups like ours.

After a nice breakfast, my sister Tina and her husband Jim took me on a grand tour of Cleveland including Downtown and some of the surrounding areas.  It was nice to spend an extended time with them and get to know them better.  My sister Tina, the second oldest, always seems to have a bright shiny countenance.  Jim is also lots of fun.

Cleveland is an old industrial city and thus there are many old buildings and lots of old housing districts. There is the old steel mill section that is now been refurbished in there trying to use it as a shopping or entertainment district now.  And, being both a Lake Town (Lake Erie) and a River Town (the 100 mile long Cuyahoga River — the river is famous for having been so polluted that it “caught fire” in 1969. The event helped to spur the environmental movement in the US.),  there are many bridges dotting the city.

The two Art Deco style sandstone sculptures on the bridge (shown above), known as the “Guardians of Traffic,” were created by New York sculptor Henry Hering.  There are actually eight of them. They were completed in 1932 and were named by the bridge’s engineer, Wilbur Watson.   Each guardian holds a different ground vehicle.The Cleveland Magazine had a very nice writeup about the Guardians in a post in 2009.  It is worth a read and can be seen HERE.

I have always been fascinated by bridges, especially large viaduct types of bridges.  Cleveland has a couple of these.  The Detroit–Superior Bridge (officially known as the Veterans Memorial Bridge) is a 3,112 foot long through arch bridge over the Cuyahoga River. Construction began in 1914 and the bridge was completed in 1918.  At its completion, the bridge was the largest steel and concrete reinforced bridge in the world.

Until 2007, the Main Avenue Bridge was the longest bridge in the state. Though no longer the longest, the bridge  is still considered to be the longest historic bridge in Ohio. The total structure length of this historic bridge including ramps is 8000 Feet The bridge’s clearance over the river is 100 Feet.This bridge is a significant example of a deck cantilever structure, and represents a significant engineering achievement of the time. Five people were killed during the construction of this bridge. 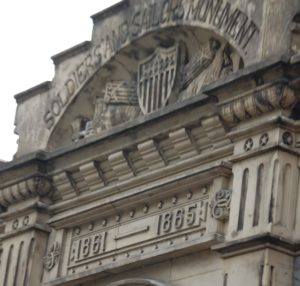 The city is also a treasure trove of some unique statues and monuments.  Most notable is the Soldiers’ and Sailors’ Monument. This monument to Civil War soldiers and sailors from Cuyahoga County is located in the southeast quadrant of Public Square in downtown Cleveland.  It was opened on July 4, 1894. It was designed by architect Levi Scofield, who also created the monument’s sculptures.

I never knew about this amazing monument.  The monument consists of a 125-foot black granite shaft erected on a square base constructed of rough-hewn granite blocks trimmed in sandstone and housing a memorial building. The shaft divided by six carved bands which list the names of battles in which Cuyahoga soldiers fought and is topped with a bronze statue of the “Goddess of Liberty” signifying loyalty to United States. Four bronze groupings at its base depict the four branches of the Union Army— the Navy, Cavalry, Infantry, and Artillery.
Following are a few more photos from the monument — 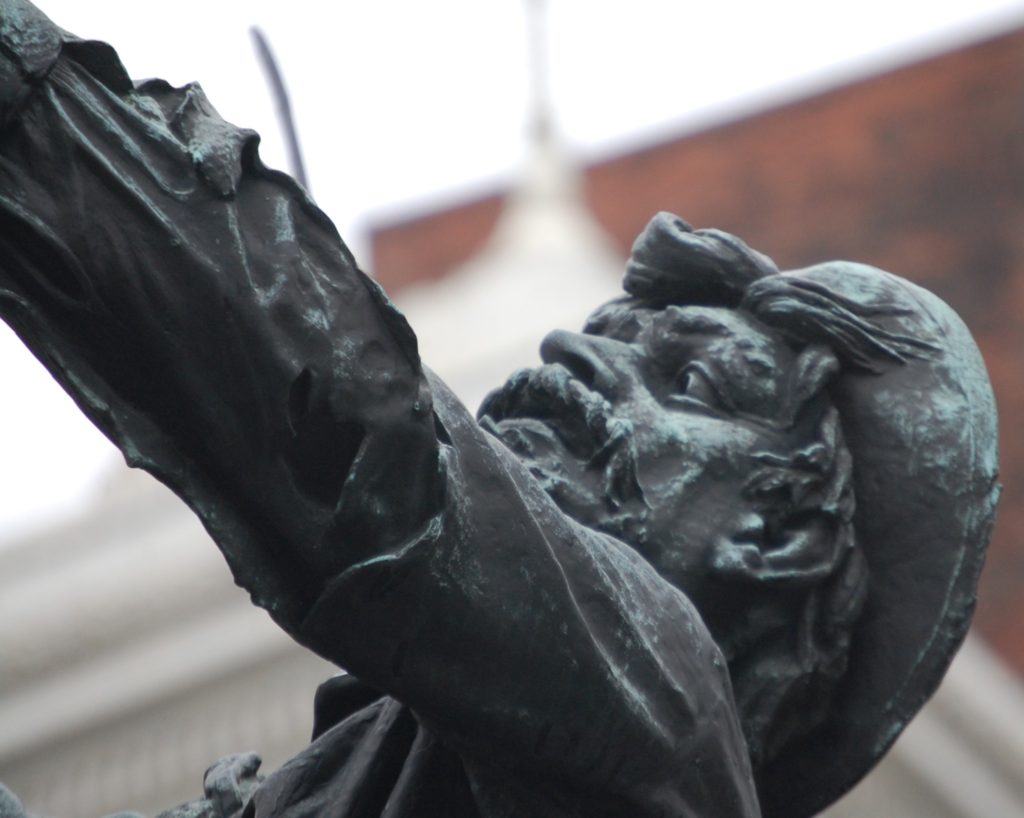 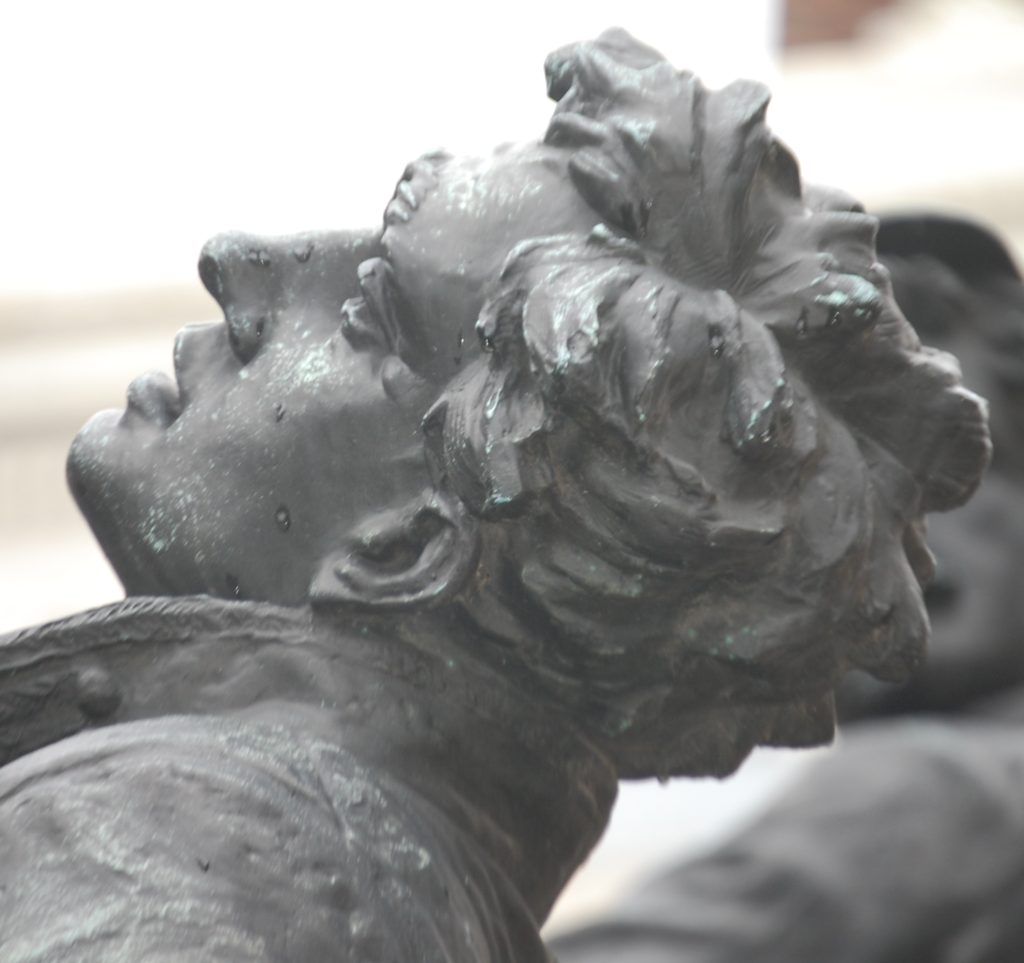 Inside the memorial building are a series of marble tablets listing 10,000 Civil War veterans that served with Cuyahoga County regiments or were from Cuyahoga County.

Also in the building,  above the tablets, on the east and west walls are the bronze busts of officers who were killed in action. Above the north side door is the bust of General James Barnett, and above the south side door is Captain Levi T. Scofield. The foundation of the column centers the room. On each of the four sides are bronze relief statues portraying the Beginning of the War in Ohio, The Emancipation of the Slave, the Northern Ohio Soldiers’ Aid Society, Sanitary Commission, and Hospital Service Corps, and The End of the War.

Just a couple of blocks from there is the Peace Memorial Statue. Better known as the Fountain of Eternal Life, and sometimes also called the War Memorial Fountain and Peace Arising from the Flames of War, this statue and fountain was designed by Cleveland Institute of Art graduate Marshall Fredericks and dedicated on May 30, 1964. The sculpture, which honors Cleveland residents who served, died, or were declared missing in military service, is situated on Veterans’ Memorial Plaza as part of the Cleveland Mall. The centerpiece is a 35-foot tall bronze figure representing a man escaping from the flames of war and reaching skyward for eternal peace. The bronze sphere from which the figure rises represents Earth. There are also four granite carvings, each representing the geographic civilizations of the world and these are placed around the sphere. The entire structure, including the base, is about 46 feet tall which ranks it as one of America’s 50 tallest statues.

We soon left the downtown area to make our way to the neighborhood of another iconic, yet quirky, location. The 1983 movie “A Christmas Story” was filmed in Cleveland and they now have created a gift store (see their website HERE), turned the house into a memorial, and the famous leg lamp is shown prominently throughout. Some of the old cars that were in the movie and other things are all in the store and it was a lot of fun to go visit a site of a movie that I watched with my children in the 1980s and now with my grandchildren.  A Christmas Story is certainly one of those classic Christmas movies for the family.

To continue the “quirky” stops, we next visited Cleveland’s Theater District, known also as Playhouse Square, to visit the “World’s Largest Outdoor Chandelier” which adorns the corner of 14th Avenue and Euclid.  The chandelier is 20 feet tall and has 4,200 crystals (actually made from acrylic resin)  on it.  Playhouse Square is considered the largest performing arts center in the United States outside of New York. The entire square looks like a fun place to visit in the evenings when the theaters are all live and active and the chandelier is all lit up.

Of course, if looking for the offbeat and quirky, one cannot miss out on another Cleveland’s iconic “sculptures,” that being the giant FREE Rubber Stamp. Located in Cleveland’s Willard Park, near the Harbor and the Rock and Roll Hall of Fame, this large sculpture by Claes Oldenburg and Coosje van Bruggen is 28 ft. 10 in. x 26 ft. x 49 ft and made of steel and aluminum.  It was commissioned in 1982 and installed in October 1991.  Oldenburg and van Bruggen are well-known for their large scale sculptures of everyday items (See a gallery of them HERE).  I had the opportunity to visit their Shuttlecocks sculptures in Kansas City in 2010 (see the link HERE).

Throughout our travels this day, I also snapped a variety of other shots around Cleveland.  There are a few murals, some unique shopping districts, interesting storefronts and more.  Here is a small collection of scenes from Cleveland.

To end the day, Tina, Jim and I stopped for a late lunch and then headed towards Little Italy again to visit the famous Lake View Cemetery – a 265 acre memorial park and also home to the 180 foot tall monument to James Garfield, the 20th President of the United States and also the Rockefeller Monument and the Wade Chapel.The Garfield Monument sits on top of a hill and at one time one could look out over all of Cleveland.  Now you need to go to the second floor balcony to catch a five-mile view of downtown Cleveland and Lake Erie.

Cleveland is a fascinating city and is certainly well worth a visit.  My next visit will include more than a couple of days as there is so much to see in this lovely city….my birthplace.